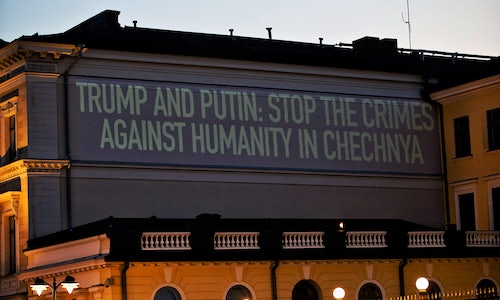 In April 2017, Novaya Gazeta, a Russian independent media outlet, first broke the news that Chechen authorities rounded up and detained in secret prisons more than 100 men who were suspected of being gay or bisexual. Chechen leaders have denied these accusations, going so far as to deny the very existence of LGBTQ people in Chechnya — a claim the Russian government astonishingly repeated. Nonetheless, there have been numerous verified reports of torture and as many as 20 men have been killed.

Since news first broke, Donald Trump and his administration have refused to publicly condemn the systematic torture, abuse and murder of LGBTQ people occurring in Chechnya as Vladimir Putin has licensed the violence to continue.

Ahead of Donald Trump and Vladimir Putin's meeting in Helsinki, Finland, in July 2018, HRC knew we had to do something bold and strategic. We needed to send a clear message that we have our #EyesOnChechnya, the human rights violations must stop, the perpetrators must be held accountable and that the international community must recognize that this is a crime against humanity.

While the world's eyes were on Trump and Putin in Helsinki, we wanted to make sure their eyes were also on Chechnya.

Over the past several months, HRC had worked with artist Robin Bell to project political statements on the Trump Hotel, the Department of Education and HRC's headquarters in Washington, D.C.

We decided to send Bell, HRC Communications Director Chris Sgro, Video Director Jon Groat and HRC Global Director Ty Cobb to Helsinki days before the summit to find a prime location for a projection near the summit.

We were unable to publicize or announce it ahead of time due to security reasons, so location was truly key to our success.

We landed on doing a projection Sunday evening Eastern Standard Time - a relatively slow news hour - that would appear on cable news channels that day and also be ready for broadcasts Monday morning. It would also be before the summit began, allowing us to squeeze ourselves into one of the most watched summits in recent memory.

After carefully tracking the perfect location - right across from the main press tent - HRC projected an enormous message onto the Presidential Palace in Helsinki that read:

Trump and Putin: Stop the Crimes Against Humanity in Chechnya
Investigate LGBTQ Persecution in Chechnya.
Bring the Perpetrators to Justice
The Whole World is Watching
Silence is Deadly
#EyesOnChechnya

With HRC's video director on hand, we live streamed the projection for more than two hours.

On Facebook, the livestream fell favorably into the algorithm, reaching hundreds of thousands of people within hours and receiving more than 12,000 engagements.

By livestreaming on YouTube, our video was easy to embed and share a link out to reporters.

Once the livestream started, we immediately jumped into our digital roll out to elevate our work. On Twitter, we posted tweet after tweet, including a Twitter thread with background on the atrocities in Chechnya, carefully watching our mentions and the #EyesOnChechnya hashtag and were able to share live tweets from people on the ground. We pinned posts on both Facebook and Twitter about the projection so it was top of mind when people landed on our profile pages.

We also immediately updated our website, homepage and began boosting our posts. We had an AP photographer on hand to immediately upload photos to the wire and we began pushing those out on Instagram, Facebook and Twitter as well.

HRC delivered a message that was impossible to miss. Millions across the world -- many for the first time -- learned about the atrocities in Chechnya as well as Trump and Putin's unwillingness to take action.

Since our projection was up across from the press tent, several reporters began tweeting about it. On Twitter, #EyesOnChechnya reached 3,556,549 accounts reached and had 32,910,584 impressions.

SE Cupp on HLNTV interviewed Sgro live during the summit. It was aired live on Al Jazeera that evening as well.

We had such a vast social roll out that we had NBC, CNN's Jim Acosta and Vaughn Sterling and CBS' Geoff Bennett, among others, messaging us on Twitter and Instagram with questions about the projection and requesting access to use our photos and footage.

We posted more than 50 organic posts on social media about the projection and reached millions within hours.

From working with Congress to activating our membership and raising up our voices together, HRC has sent a clear message to the Trump administration -- and now the world -- that we have our #EyesOnChechnya. 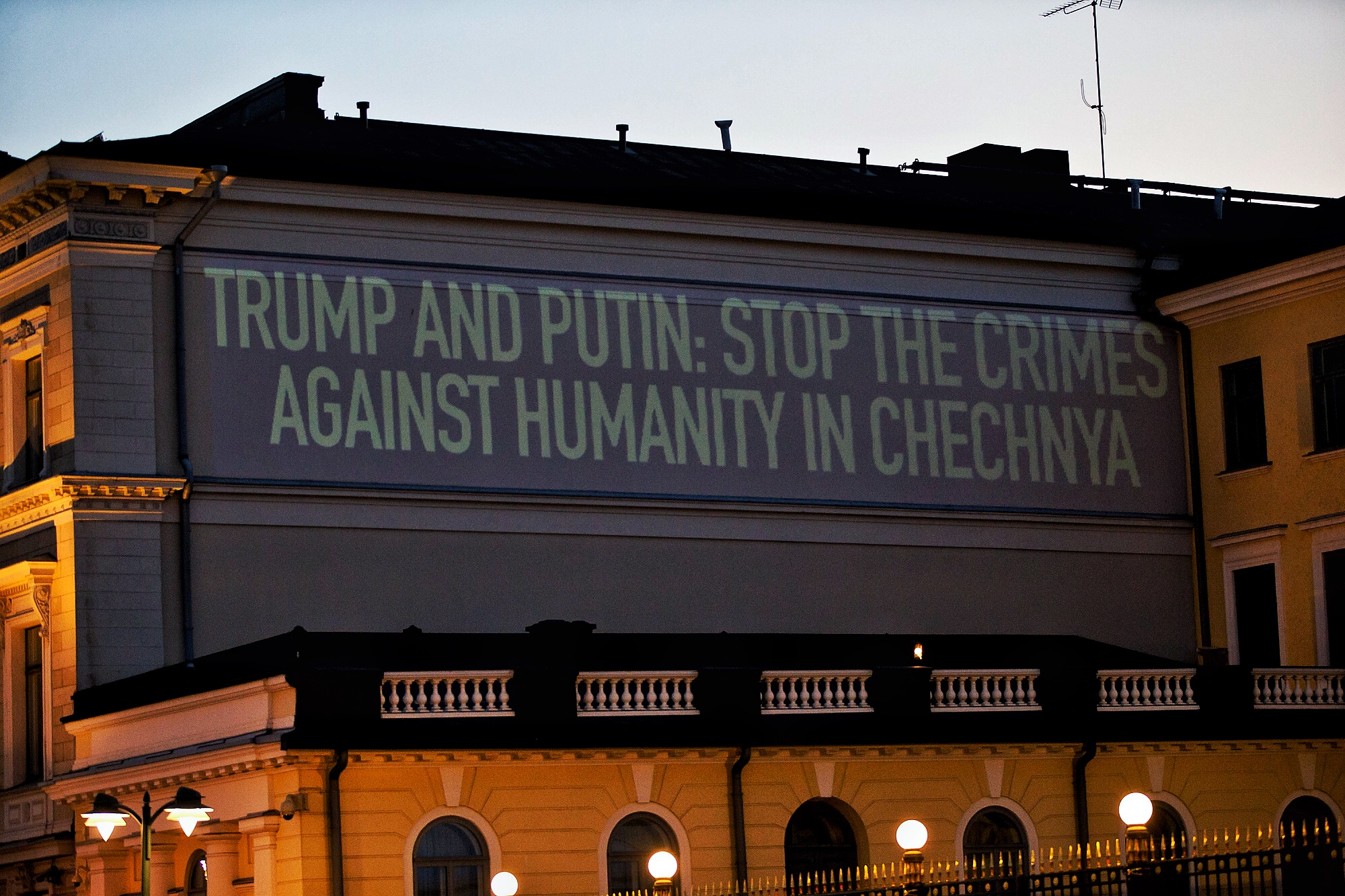