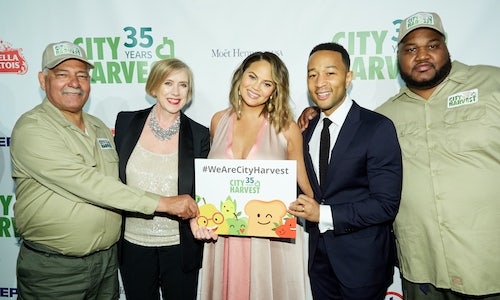 We Are City Harvest

City Harvest is the largest food rescue organization in New York City, dedicated to rescuing fresh, nutritious food that would otherwise go to waste and delivering it, free of charge, to hundreds of food pantries, soup kitchens, and other community food programs across the five boroughs.

The "We Are City Harvest" campaign was launched in April 2018, during the night of our annual Gala, to commemorate the organization's 35th year feeding New York City's hungry. The timing also coincided with our organization's new strategic plan, with the goal of increasing the amount of food that we rescue and deliver to 75-80 million pounds a year, in direct response to the pervasive high-need we continue to see across New York City.

The campaign's colorful and illustrative design marked a fresh new creative direction for the organization-- embracing a unique visual approach that is a departure from City Harvest's previous black and white photography-based campaigns. The creative is vibrant, telegraphic, approachable, and inclusive, and is combined with large, eye-catching headlines that are warm, positive and also inclusive.

-Inspire all New Yorkers, whether they are City Harvest supporters or recipients of the food that we rescue

-Rally the city and its people behind an optimistic, inclusive and solution-oriented mission to feed hungry New Yorkers

-Build a loyal and engaged community on social media

In conjunction with an innovative and design-driven brand and fundraising campaign that flooded NYC, and with an undeniably feel-good, positive and optimistic tone, City Harvest's digital and social media campaign centered around the idea of #WeAreCityHarvest, sheds a bright light on the organization and its impact through the lens, experiences and stories of the diverse people who make City Harvest such an important and impactful part of the NYC community.

Through this inclusive campaign extension, City Harvest collected testimonials from the spectrum of New Yorkers engaged with the organization: from its dedicated employees and drivers, to the countless chefs, restaurants, food distributors and donors, soup kitchens and food pantries that City Harvest works with, to the thousands of financial donors, corporate institutions, community members, and selfless volunteers, to the hungry New Yorkers we serve -- the campaign intends to showcase one simple reality; We are City Harvest.

We are neighbors helping neighbors. New Yorkers supporting New Yorkers. And believers in the truth that no New Yorker should have to go hungry. Because together this year, we will rescue and deliver 61 million pounds of fresh food that would otherwise go to waste, to feed the more than 1.2 million New Yorkers who need it most. It's New Yorkers' spirit and passion that fuels City Harvest to help feed our city…one day, one meal, and one New Yorker at a time.

Framed by the feel-good and friendly campaign creative, the voices and anecdotes of the many people who make up the City Harvest community helped bring our work and impact to life in an engaging and dynamic way across our social channels, as well as on a dedicated web page on our website. We incorporated the #WeAreCityHarvest hashtag on all of our digital and printed marketing materials, on signage and materials at signature events throughout the year, in a dedicated video, and on respective advertising creative - and encouraged all participants to share on their respective channels as well...and boy, did they ever.

The "We Are City Harvest" campaign resonated with thousands of New Yorkers and significantly increased conversation about our work and hunger in NYC, boosted our fundraising efforts tied to the new strategic plan, and mobilized our ambassadors around the #WeAreCityHarvest rallying cry online. We achieved our goals of inspiring New Yorkers with the following impressive results:

- Since the April launch, the campaign has generated over 13,500,000 million impressions including social and traditional media

- On the evening of the campaign's official launch, City Harvest raised $4.8 million at the 35th Anniversary Gala, and from that night through the end of August, the campaign has raised an additional $7 million more ($12 million total since our April launch!)

- More than 150,000 engagements, including likes, comments, and shares across Instagram, Twitter and Facebook posts, with an additional 5,000 views of our "We Are City Harvest" campaign video

- Increased interest in volunteering, with over 5,500 volunteers completing projects, 343 new volunteers, leading to just under 17,000 hours dedicated to our organization's work – saving the organization approximately $410,380 during this time period

Video for We Are City Harvest 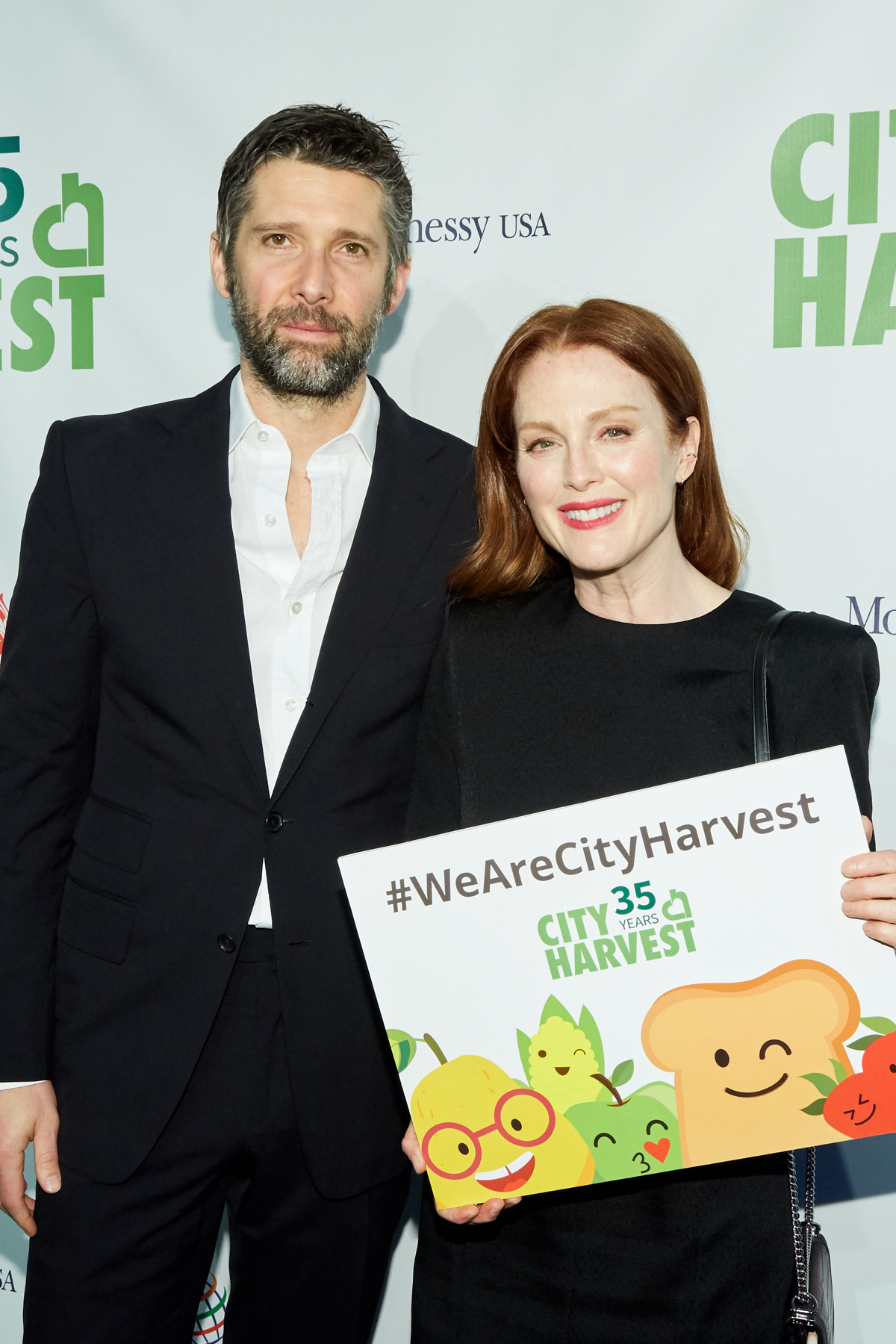 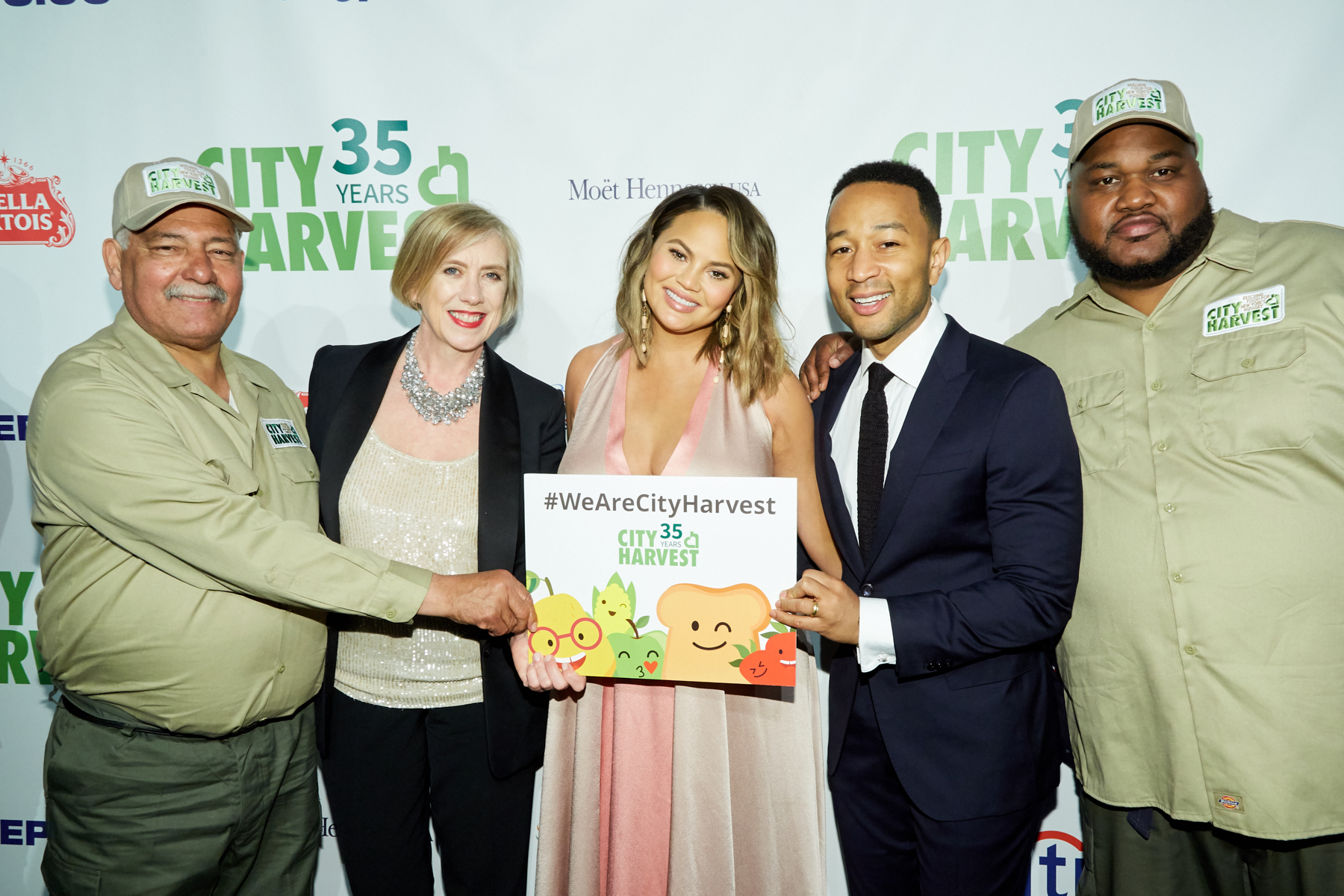 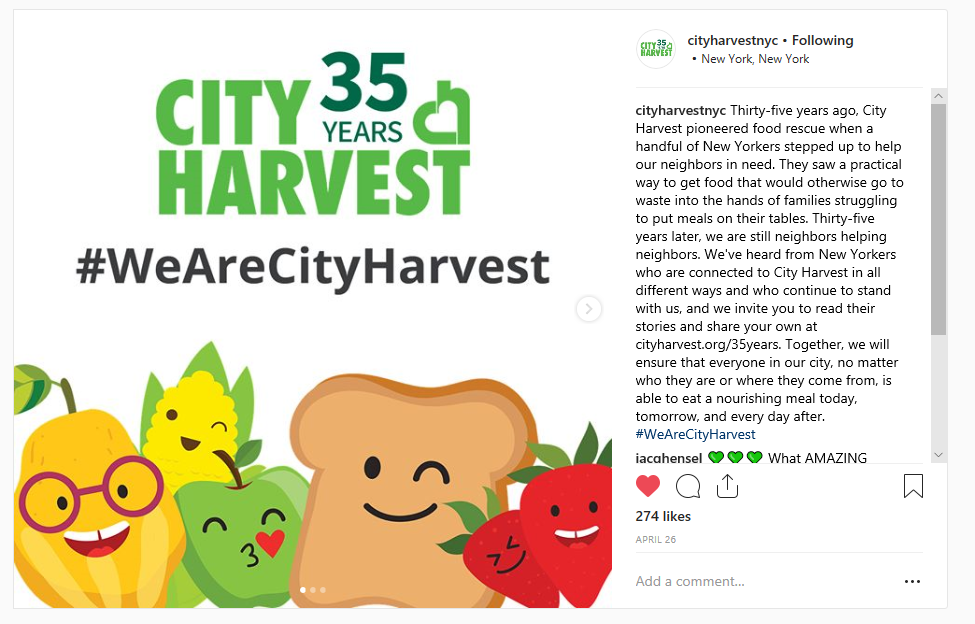 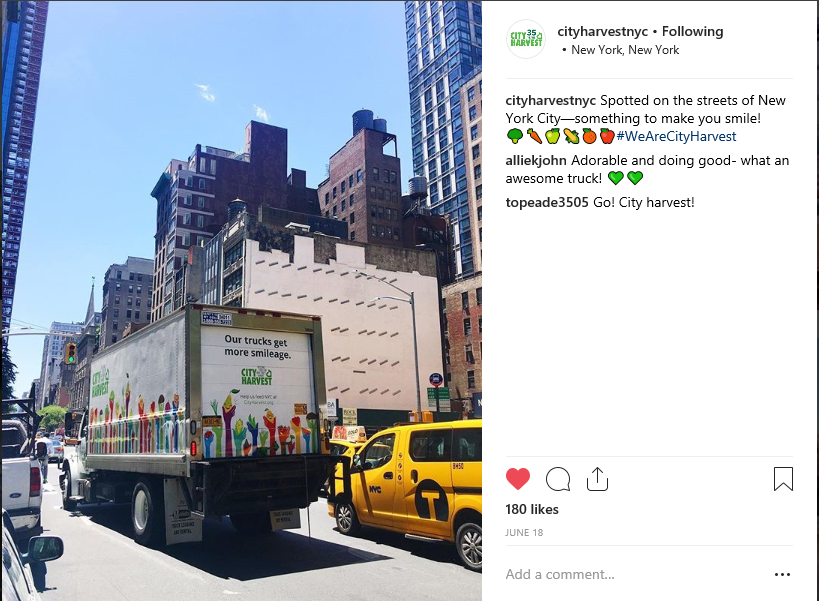 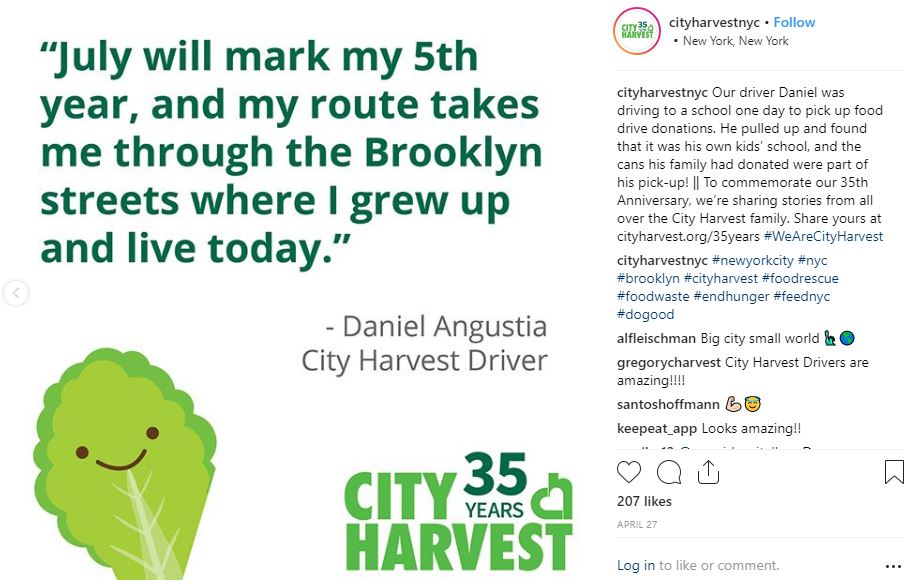 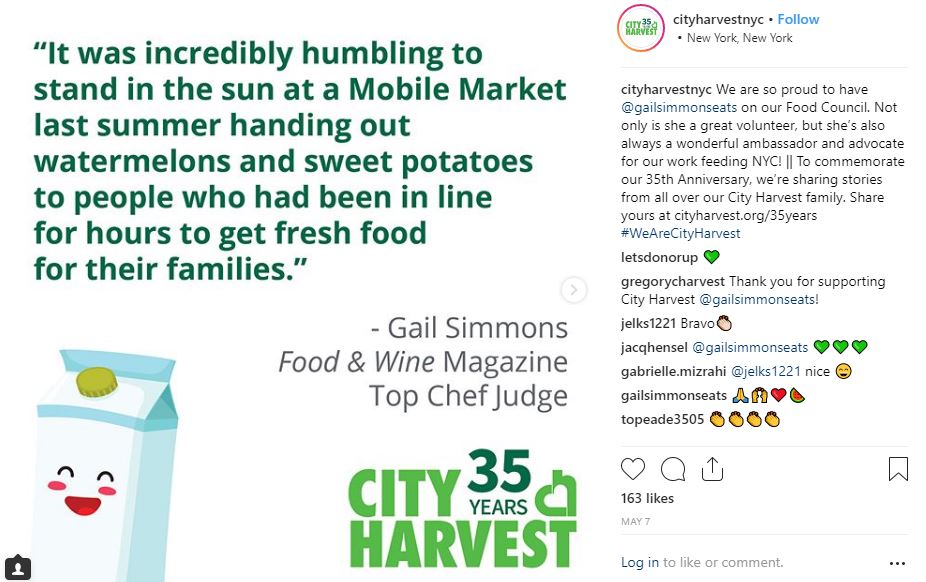 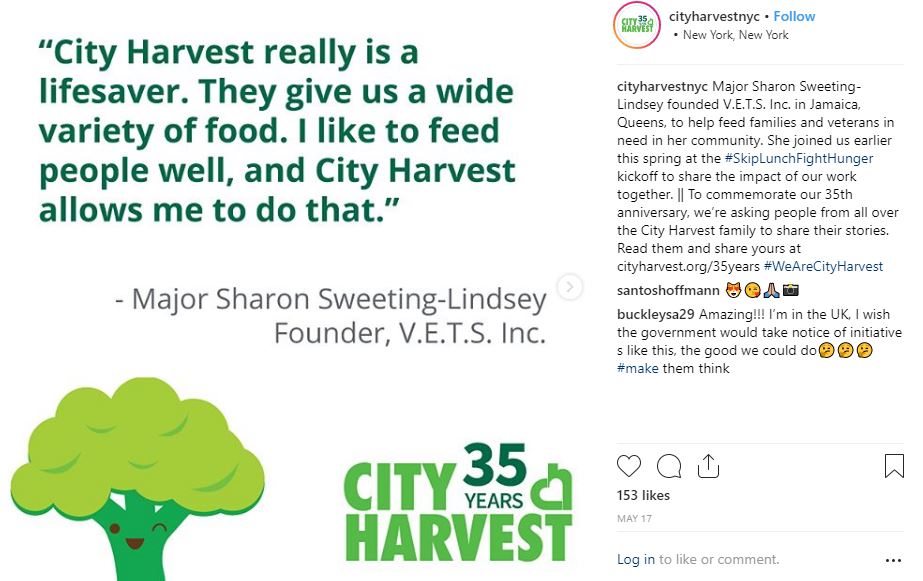 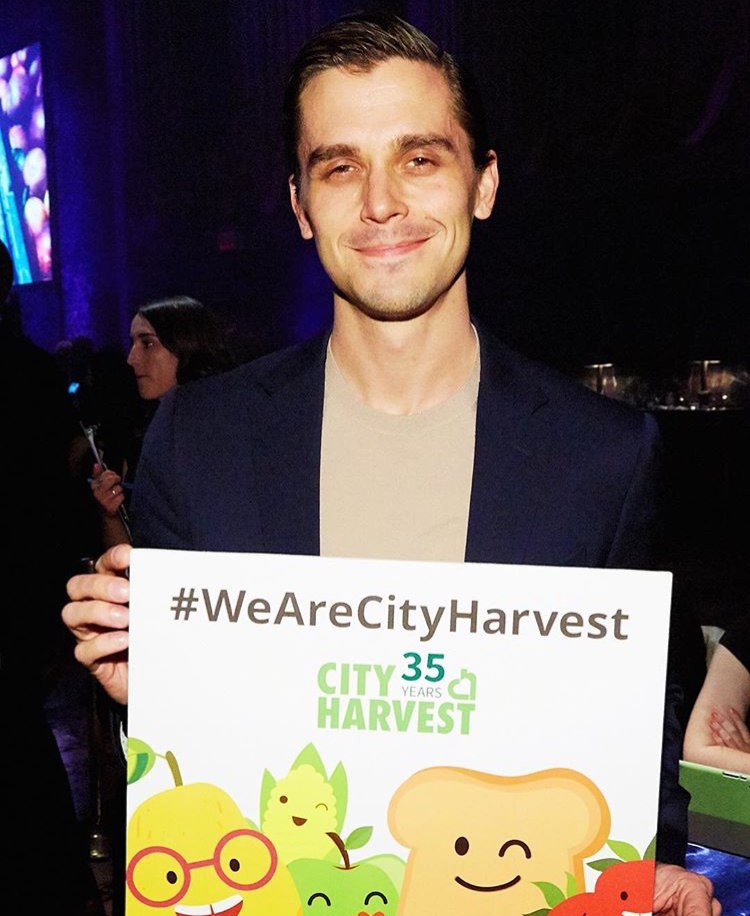