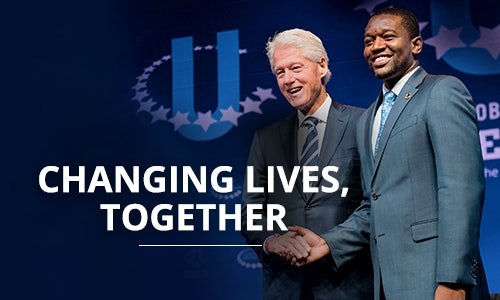 Issuing an annual report is an important practice for nonprofit organizations to transparently communicate with donors, supporters, and others interested in their work. For the Clinton Foundation, it was an opportunity to help reintroduce itself after sustaining an unprecedented barrage of false, political attacks from the 2016 election cycle that continue to this day.

The video ad and campaign respond to the false claim that the Clinton Foundation shut down after the election. Through this campaign we were able to show the vibrancy and strong impact our work had in 2017. For the first time ever, we launched a video ad alongside our annual report, landing page, and social graphics. We deliberately created this video in-house by using recycled material, at little to no cost. We then utilized President Clinton and Chelsea Clinton's social media reach along with our partners and surrogates to help this organic campaign extend its reach.

The new positioning showcased the Foundation's three core areas of impact: Creating Economic Opportunity, Improving Public Health, and Inspiring Civic Engagement & Service. The Foundation compiled and shared stories of impact – including dynamic video and photos featuring President Clinton and Chelsea Clinton in the field, beneficiary stories and earned media – from across its diverse range of programs, partners, and beneficiaries that would be included in its report that covered 2017.

In consideration of these factors as well as the current media and marketing landscape, the Foundation worked with SJI Associates to create and execute a digital- and mobile-first report and affiliated campaign to maximize their digital reach. SJI developed a cohesive visual design and creative strategy to unify the Foundation's central messaging, values, impact, and President Clinton's words, into a new tagline and digital campaign.

For the first time ever, we launched a video ad alongside our annual report, landing page, and social graphics. We deliberately created this video by using recycled material, at little to no cost. We then utilized President Clinton and Chelsea Clinton's social media reach along with our partners and surrogates to help this organic campaign extend its reach.

One key message presented a central theme: "Everyone deserves a chance to succeed, everyone has a responsibility to act, and we all do better when we work together." "Together" applies in many ways: how the Foundation works together with partners and supporters across the country and around the world to improve lives and make a difference. The Clinton Foundation is "Changing Lives, Together."

This central tagline was an anchor for presenting the three core issue areas – as well as the depth and breadth of the work – to broader audiences. The report focused not only on data, but on the stories of real people who benefit directly from the Foundation's work, and others who partner with the Foundation to bring programs to life. It also featured inspiring quotes and photos of President Clinton and Chelsea Clinton in the field visiting Foundation partners, projects, and programs.

Through this campaign, our goal was to reach a large audience with our 30-second video ad using only organic social media promotion. To help achieve this goal, President Bill Clinton launched the 2017 Impact Report on May 24, 2018 by posting the video ad across his social media channels with a personal message. We quickly followed with amplification across all of the Foundation's channels, including Facebook, Twitter, Instagram, and LinkedIn. We also encouraged our partners, staff, and supporters to share the posts. Over the course of the campaign, we generated 172,000 organic video views across President Clinton and the Foundation's social media channels.

To supplement the video ad, we also aimed to generate significant engagement (likes, shares, comments) on a series of social media graphics which featured key elements pulled from the 2017 Impact Report, including: statistics about the impact of our work, quotes from our principals, and other engaging storytelling content such as videos about our partners and those impacted by our work. Over the course of the campaign, we generated more than 1.7 million impressions and nearly 40,000 engagements through strictly organic promotion.

Through our email engagement program, we also aimed to drive campaign awareness to the report. Through three targeted emails, we reached more than 166,000 people with information and messaging about the 2017 Impact Report.

Video for Changing Lives, Together 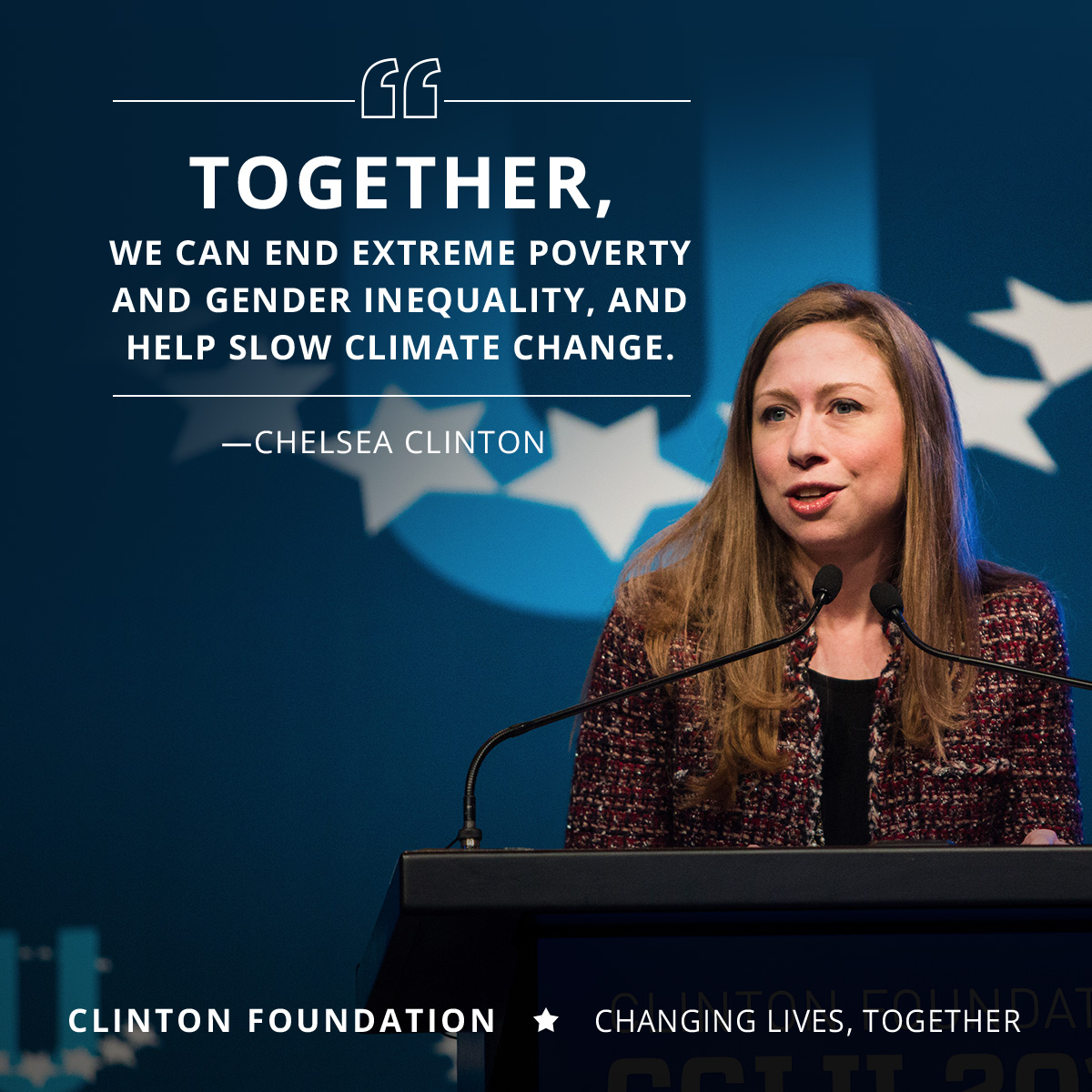 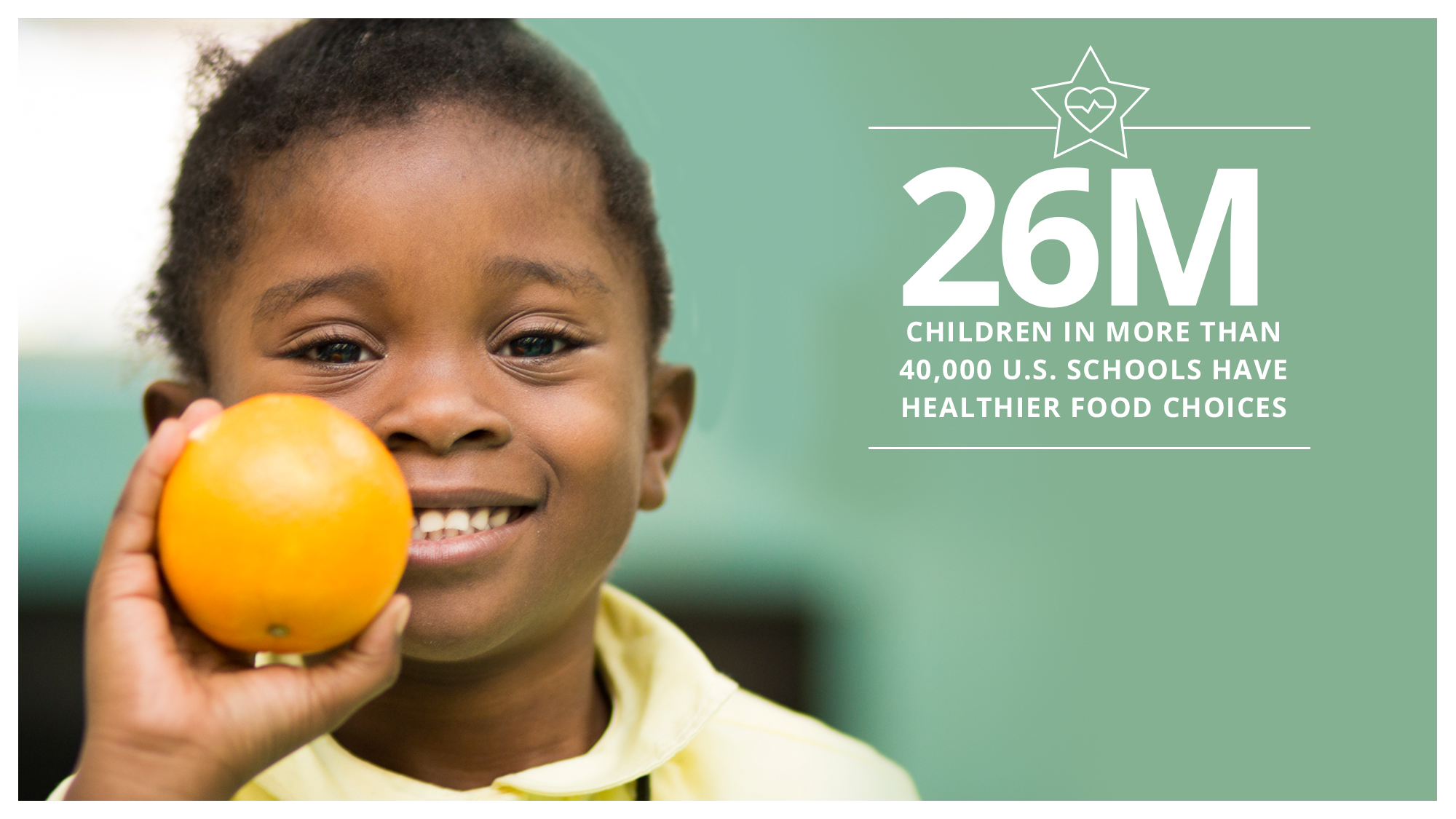 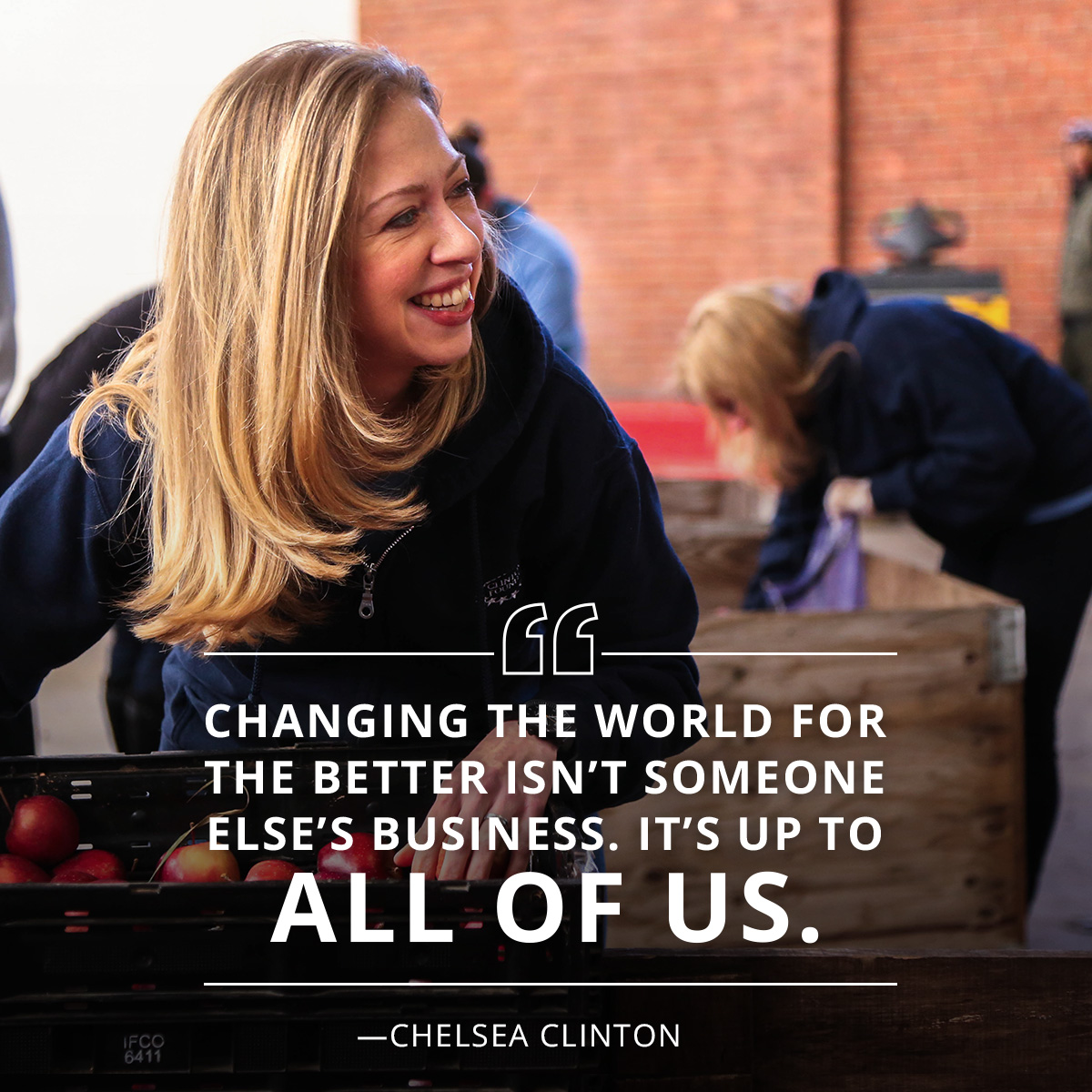 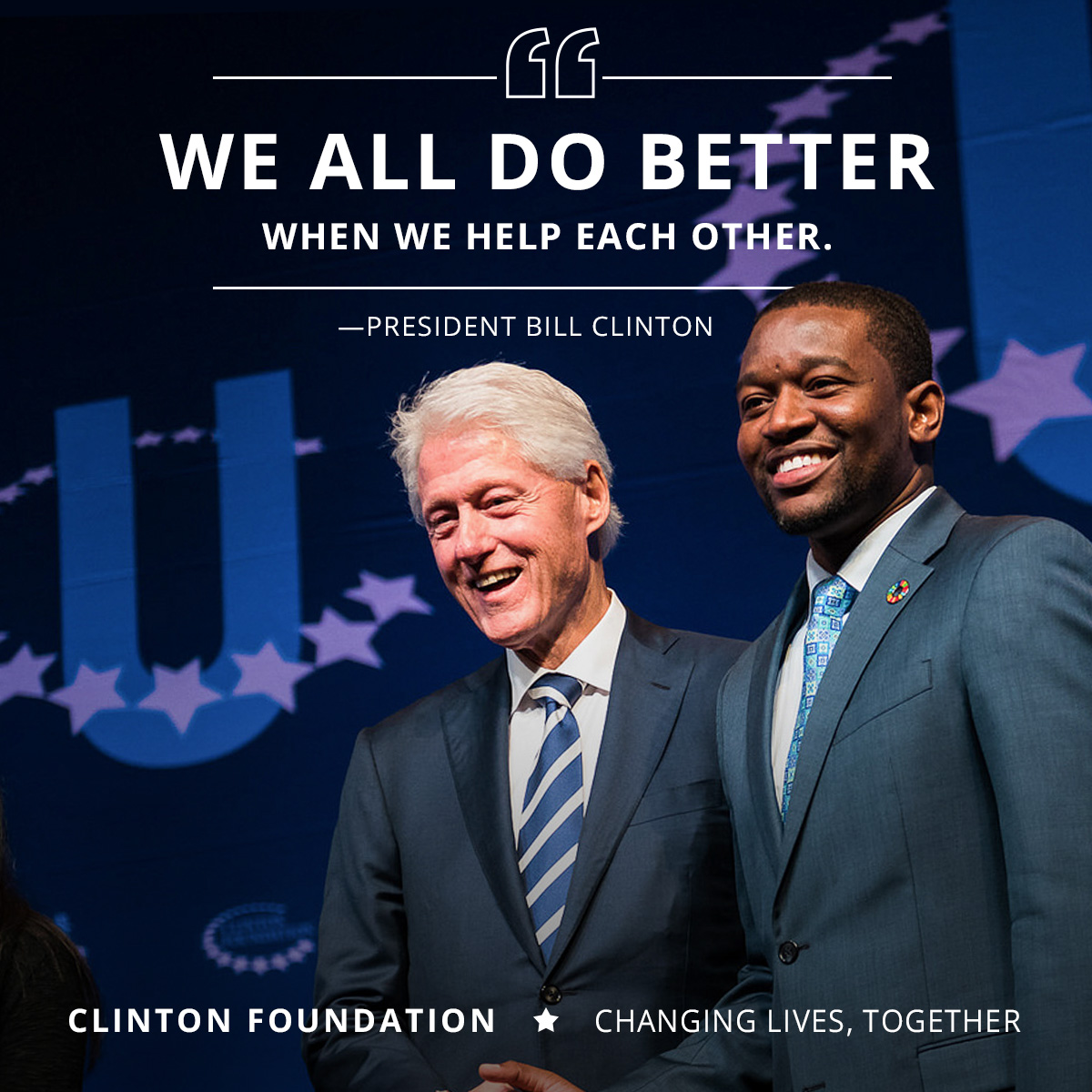 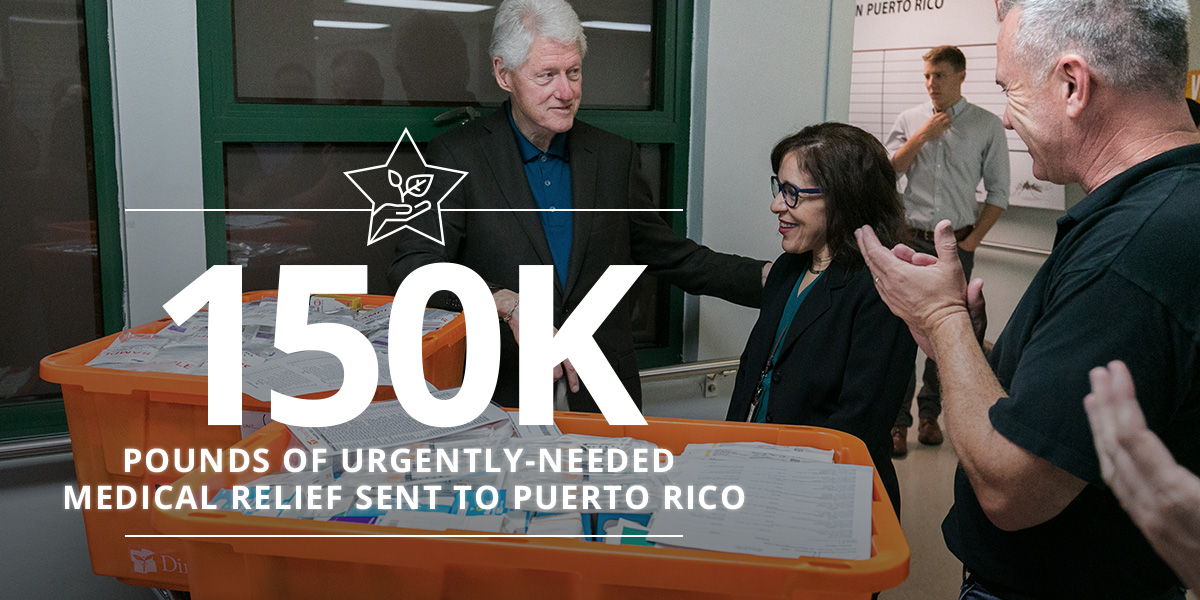 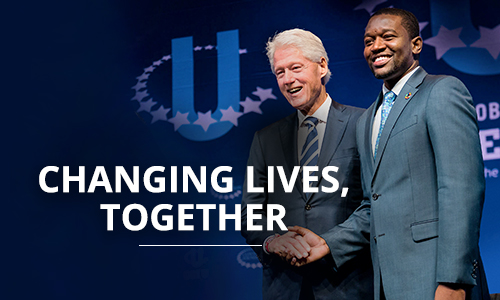