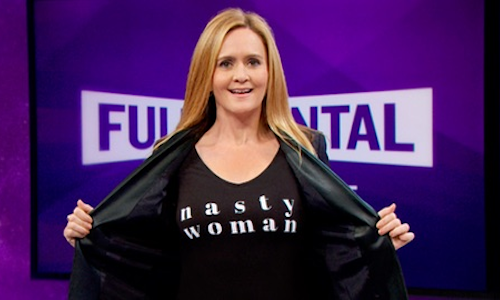 The Nasty Woman T-shirt began as a spontaneous social reaction to that infamous debate comment on Oct 19th. Sam Bee embraced this trending T-shirt as part of an extended segment on her program a few days later. Full Frontal used Facebook and Twitter to recruit fellow Nasty Women to help raise money for Planned Parenthood. In partnership with Omaze, we created a Nasty Woman t-shirt for fans to purchase with all net proceeds going to the cause. Throughout the campaign, celebrities and fans posted photos of their shirts to encourage their friends to support Planned Parenthood.

Full Frontal encourages our fans to get involved in causes we care about too. In addition to the Nasty Woman campaign with all net proceeds going to Planned Parenthood, promotion around the Women's March benefited DistributingDignity.org, and Full Frontal's record-breaking Not The White House Correspondents Dinner in April benefitted The Committee to Protect Journalists.

The Women's March: On-the-Ground in Washington:

In April, Full Frontal's support for social causes took on the growing assaults on journalism, by creating and hosting Not the White House Correspondents' Dinner: A party to celebrate the free press, while we still have one. This event raised more than $200,000 to support worldwide efforts by The Committee to Protect Journalists.

In Summer 2017, Samantha Bee challenged the campaign on-air and embraced the seemingly ridiculous goal of raising $1,000,000 for Planned Parenthood. With the campaign coming to an end, we incentivized our fans to purchase a shirt by offering a Full Frontal swag bag including one of Samantha Bee's blazers to the Nasty Woman whose purchase helped us cross the $1M donation mark. On July 11th, Hillary Clinton (the original Nasty Woman) joined the effort, endorsed and tweeted a picture of her Nasty Woman t-shirt to her +18 Million followers. Two days later, Samantha Bee announced that Full Frontal had raised more than $1 Million for Planned Parenthood.

Full Frontal's fans take action. The Nasty Woman campaign in support of Planned Parenthood has raised more than $1 Million to date, with donations coming from Nasty Women (and men) in more than 100 countries.

The Women's March ranks as the most talked about day in Full Frontal's social media history since the show premiered, with total social impressions exceeding 7.8M. The day of the March, @FullFrontalSamB and @iamsambee were mentioned 31.4K times, which tracks 13X ahead of the daily average since the series premiere. Women's March related content generated 18-77% more engagements than the average post published across Facebook, Twitter & Instagram throughout 2017 to date. 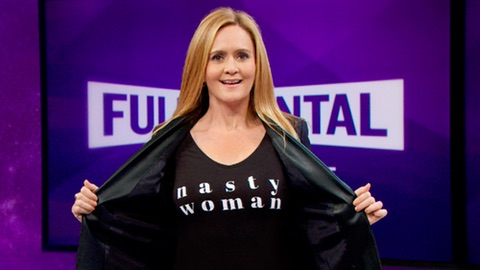