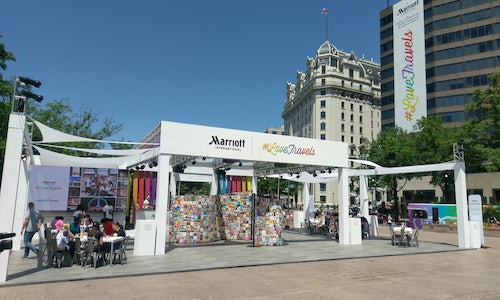 Marriott International believes in making all people feel that they are truly embraced and comfortable while supporting the communities in which we do business. However, many LGBTQ youth do not feel comfortable or embraced in their own homes. According to the True Colors Fund, nearly 4 in 10 American youths experiencing homelessness identify as lesbian, gay, bisexual, transgender or queer, yet LGBTQ youth make up less than 7% of the general youth population. With this year's DC Capital Pride activation Marriott International's #LoveTravels campaign sought to bring awareness to the issue of homelessness in the LGBTQ community, particularly in our hometown of Washington, D.C. and to demonstrate the Marriott International proudly stands with the LGBTQ community.

On June 8th and 9th, 2017, right before the annual Capital Pride parade, Marriott International invited people from all over to join them in Freedom Plaza, right in the heart of Downtown D.C. to create their own unique painting, doodle, or hand-written expression of love in support of homeless LGBTQ youth to be added to the powerful #LoveTravels Mosaic. Marriott also make a public declaration of support with large scale building wraps on two of their most notable properties in DC, stating that "Marriott International Proudly Stands with the LGBTQ Community".

For each additional piece of art received for the #LoveTravels Mosaic, Marriott International made a contribution to Casa Ruby, the only bilingual multicultural LGBTQ organization providing lifesaving services and safe shelter to many of the most vulnerable transgender residents of Washington D.C. Additionally, this year Marriott announced the Marriott International True Colors Fellowship. The True Innovation Fellowship, underwritten by Marriott International, provides one young person the opportunity to participate in the development of technology solutions that address homelessness among LGBTQ youth.

In addition to our philanthropic partners, Marriott partnered this year with a variety of notable social influencers and celebrities in the LGBTQ community including: Tituss Burgess, Shannon Beveridge, Raymond Braun, Amber's Closet, Judy and Denis Shepard, and Jacob Tobia. These partners helped to draw visitors to Freedom Plaza with a variety of targeted social media posts and public relations efforts.

Marriott worked with Vice and Here Media to create both social and video content to draw visitors to Freedom Plaza. Here Media's diverse portfolio includes the largest LGBTQ brands in the world. By partnering with Here Media, Marriott was able to spread our message and story of support for LGBTQ Homeless youth across some of the most trusted media brands in the LGBTQ community, including OUT, Pride, and Advocate. Efforts with Here Media focused more strictly on digital content, with long form blog articles and social video published to.

The partnership with Vice media took a less traditional route with the integration of the Vice Bus. Vice put out an open call across their Vice social platforms announcing that they would be in DC with Marriott International and inviting followers to join them on the Vice Bus.The bus activation centered on a live conversation around of variety of topics that impact the LGBTQ community. Mosaic visitors and passersby were welcomed into the engaging, love-filled space to discuss relevant issues and share their experiences. All interviews were taped for future social efforts.

This was the only public brand activation of its kind during Capital Pride. The public location, enormous scale, and strong environment of welcoming communicated to all passing by that Marriott welcomes all.

During the two day exhibit of the #LoveTravels Mosaic, Marriott International received an additional 800 pieces of art to be added to the mosaic.

Marriott International and #LoveTravels earned over 230MM media impressions, with placements in publications such as People Online, The Washington Post, and HuffPost as well as interview segments on NBC4 Washington evening and morning and Fox 5 DC.

Here Media and Vice both performed above benchmark, with about 10MM collective social and digital impressions. The Vice media campaign is still ongoing. 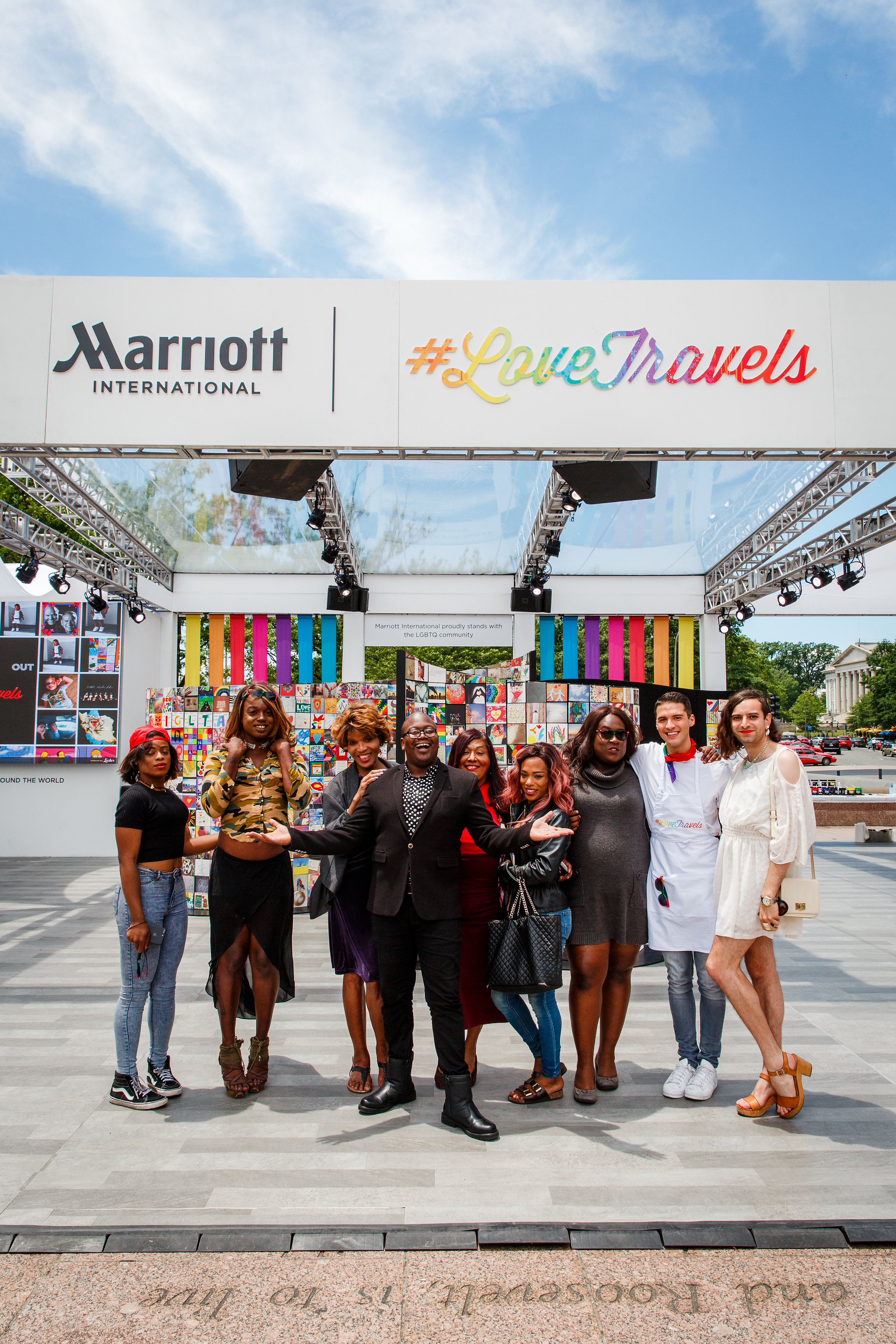 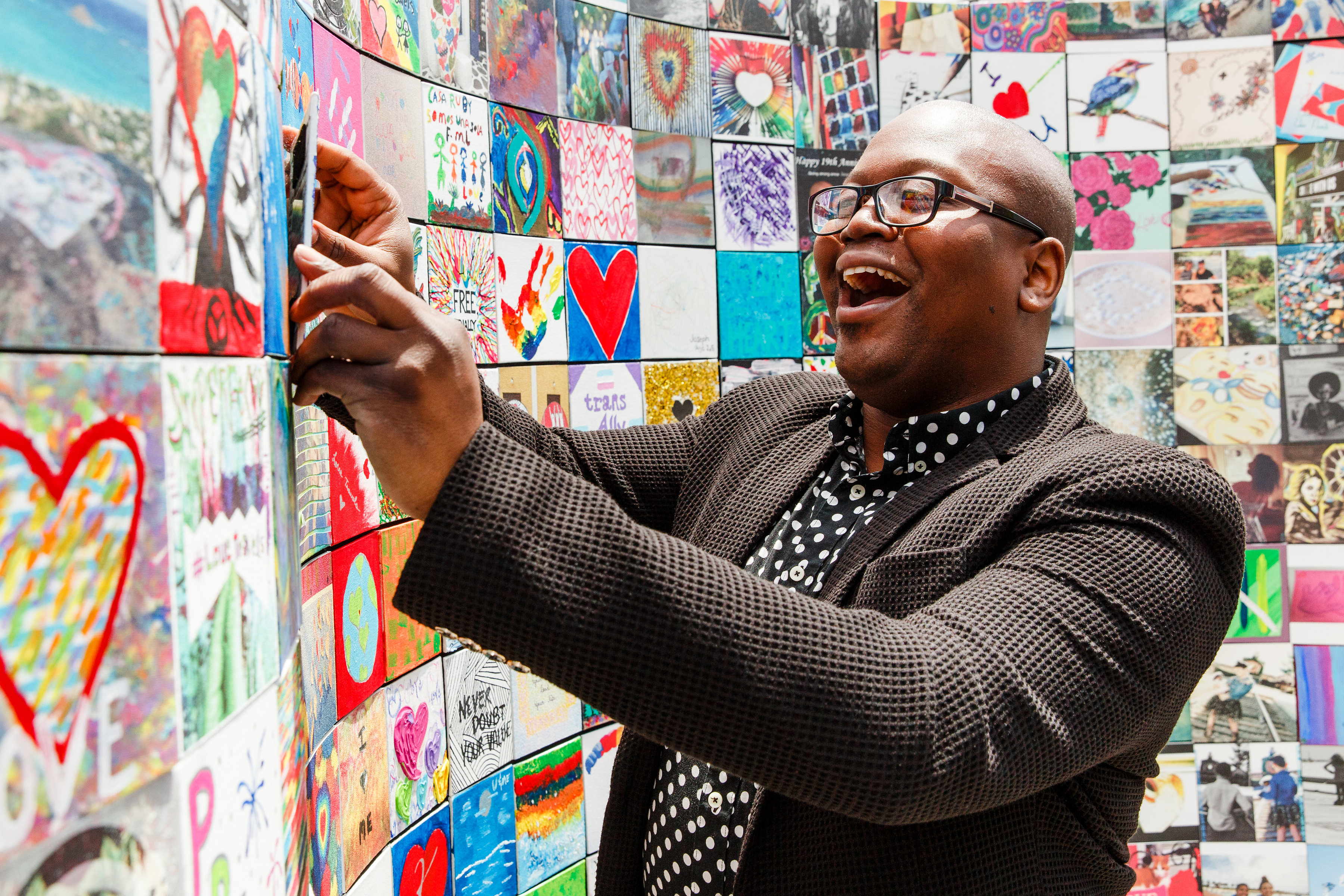 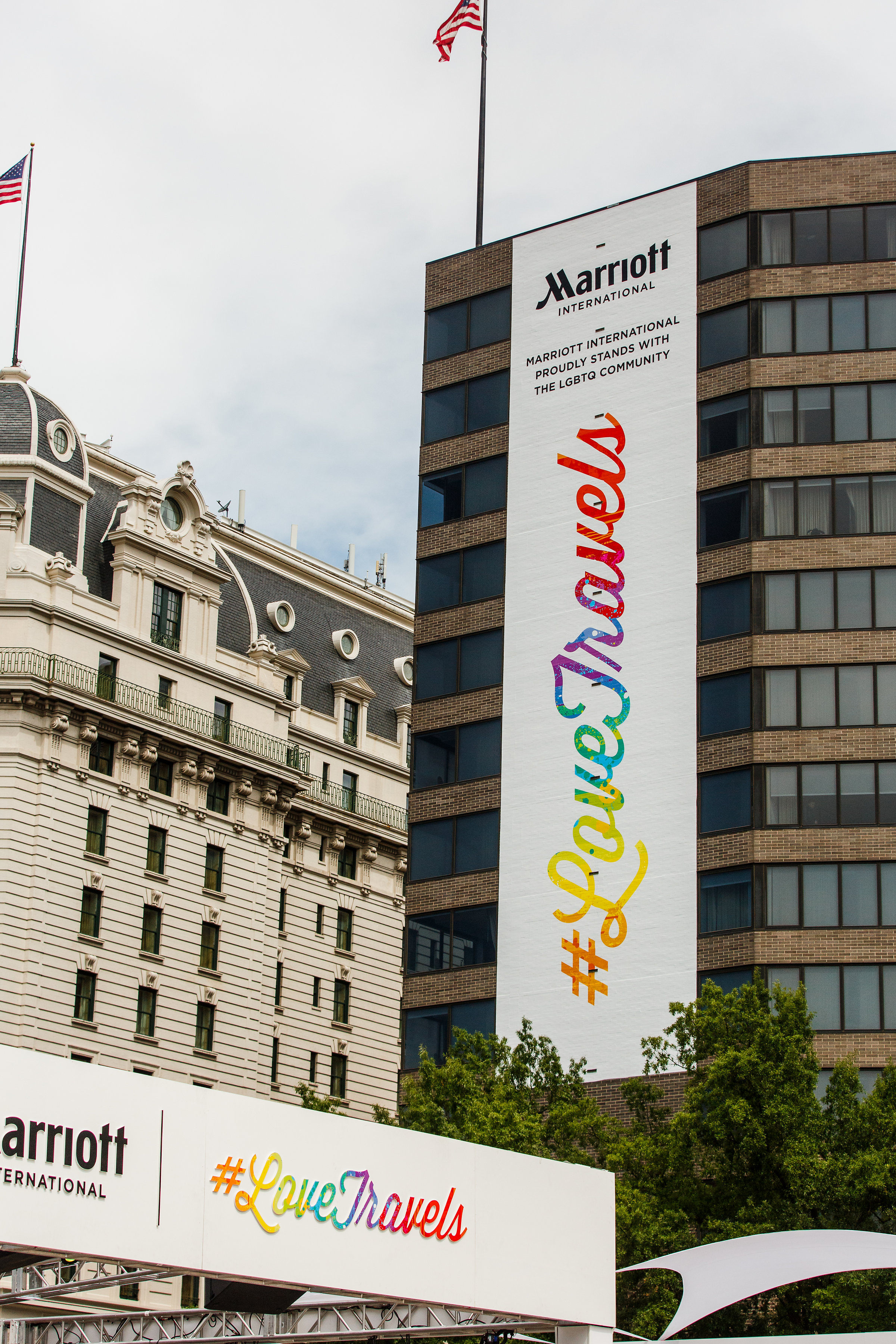 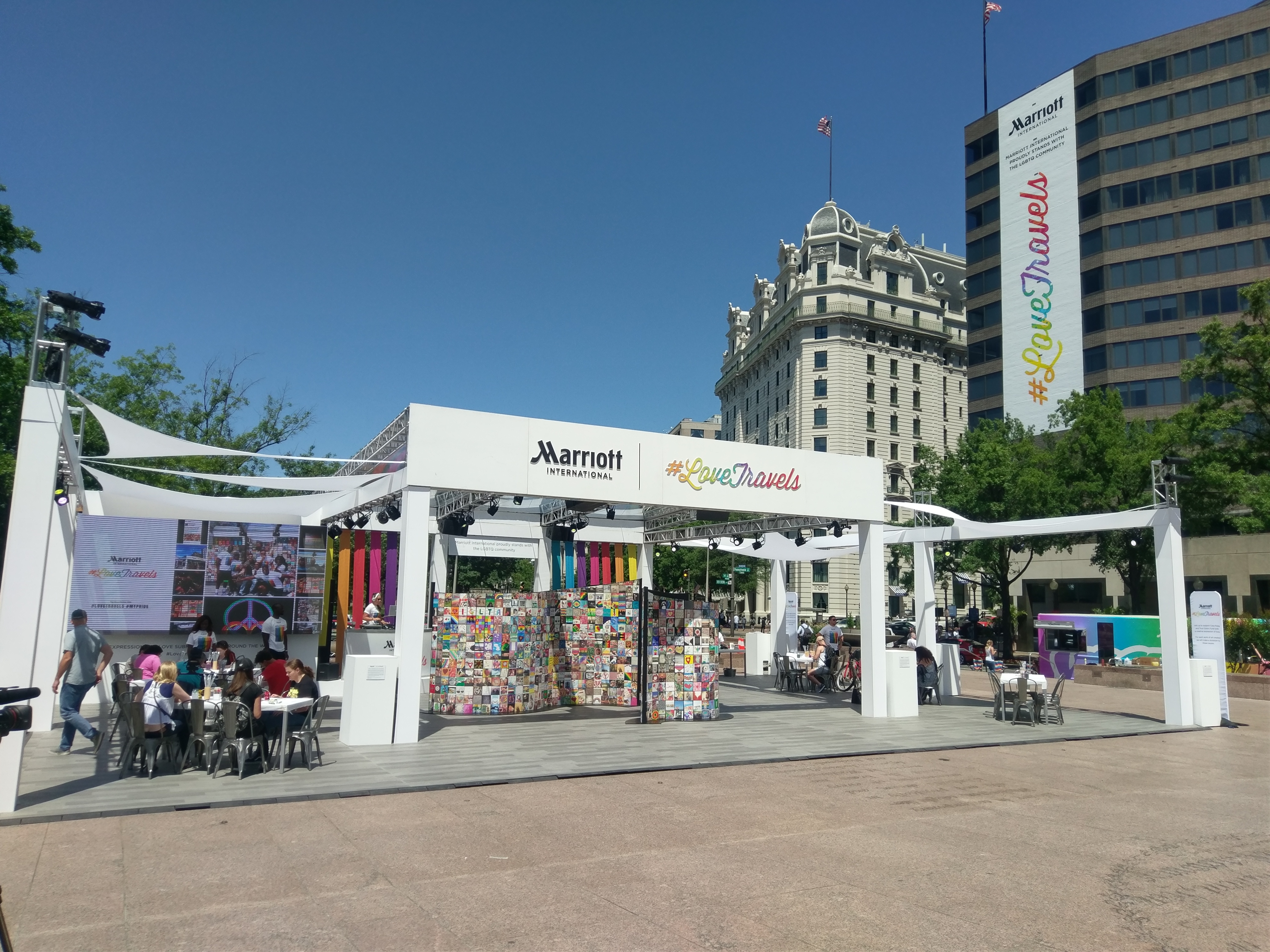 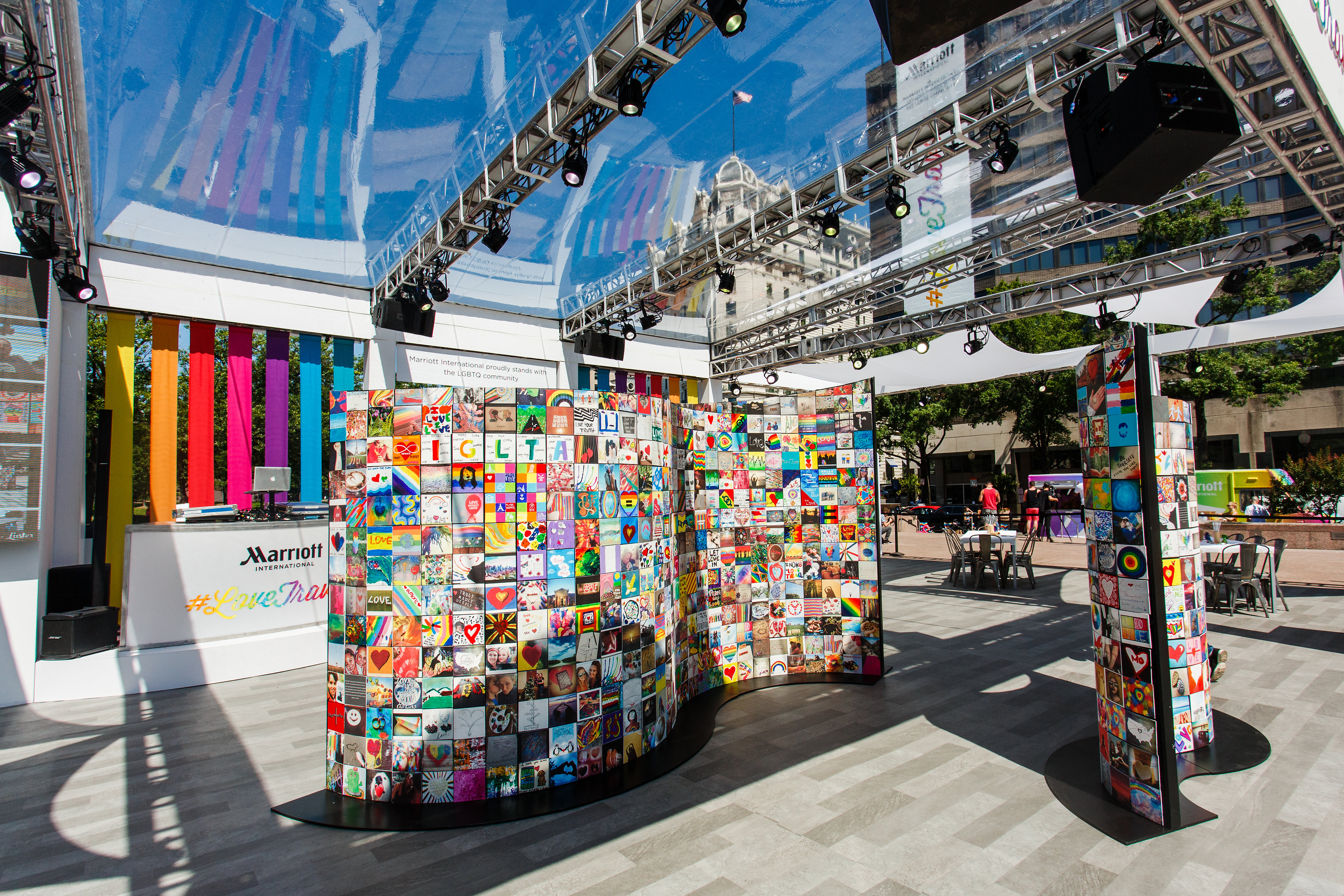