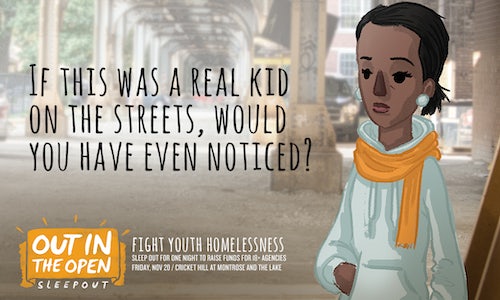 Out In the Open Sleepout

Challenged by misconceptions and apathy, advocates struggle to raise awareness and funds to support these teens – 40% of whom identify as LGBTQ, often seeking shelter after being put out by their own families.

Facing multimillion-dollar cuts and a looming Chicago winter, area shelters and services needed our help more than ever.

Our objective was to help the public experience what homeless teens go through, while simultaneously raising money for the non-profits that provide them with essential lifelines.

Our strategy: bring the issue of youth homelessness Out in the Open.

By leveraging an earned-centric approach with heavy emphasis on social, we created disarming portraits and stories of real homeless teens as provocative illustrations – poking holes in people's preconceptions and reminding us that these are just kids.

This campaign was supported online via social media, video portraits and a campaign website. Our animated profiles told the uplifting stories of these real Chicago teens thriving in the face of homelessness and discrimination. Our team was touched by their struggles with domestic violence, LGTBQ identity and more. To capture their stories of hope and strength in the face of all odds, we handcrafted these films entirely in house. As their real faces are revealed, viewers are reminded of the truth behind each story and the vital role they can play in helping others rise above homelessness.

Users were driven to the campaign website, which featured "Out in the Open Outfitters," a subversion of the typical online shopping experience where users could "purchase" virtual products representing the goods needed by homeless teens: toiletries, food, transit passes and more. The virtual purchases were actually very real donations to our non-profit partners.

The campaign culminated in the Out in the Open Sleep Out – a "Dusk 'til Dawn" rally at one of Chicago's prominent public parks, where participants spent the night sleeping outside to draw attention and raise money for the thousands of Chicago youths who find themselves looking for shelter on a regular basis.

Supported by our social and digital efforts, the Out in the Open Sleep Out exceeded all expectations, with 725 campers braving a snowy November night to sleep outside to raise awareness and funds for youth homelessness.

The campaign secured 20 on-air media features, with additional coverage in online outlets including DNAInfo and Chicagoist. Combined coverage totalled 1.5 million impressions, and ensured youth homelessness was top-of-mind for Chicago residents in advance of the holidays.

The Out in the Open website received over $44,000 in donations, which benefited 19 youth homelessness agencies, including AIDS Foundation of Chicago, Chicago House, the Youth Empowerment Performance Project and Thresholds.

Video for Out In the Open Sleepout 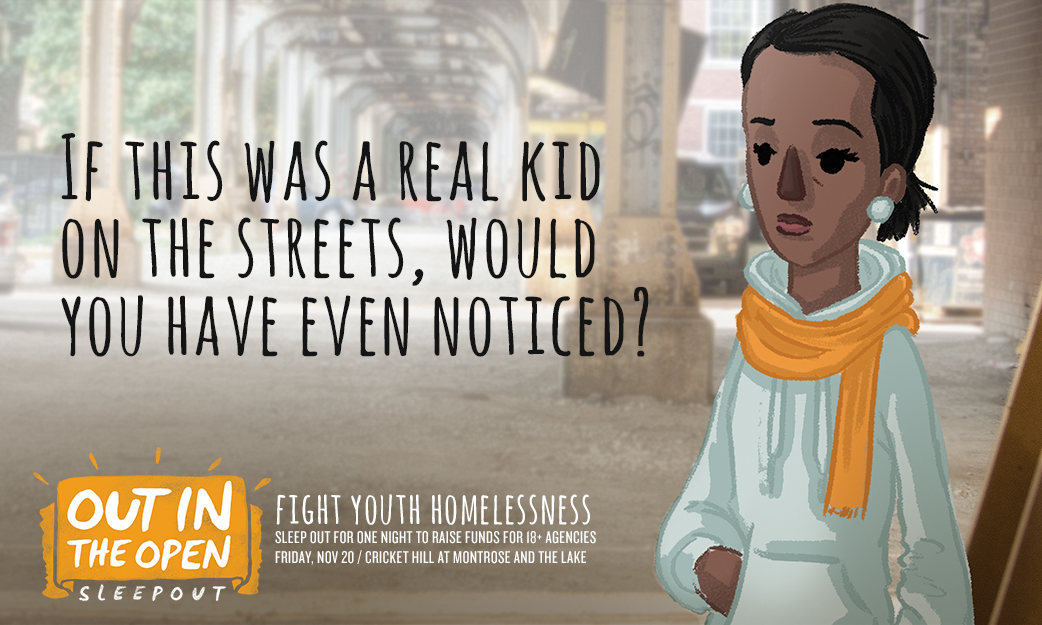