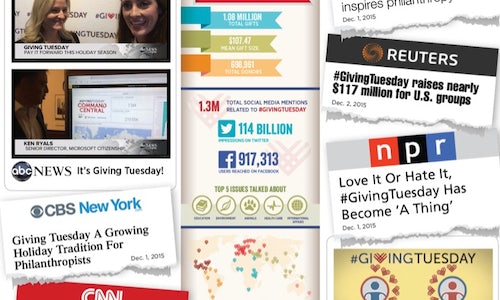 #GivingTuesday: The Day the World Gives Back

On Thanksgiving we give thanks. On Black Friday we get deals. On Cyber Monday we get online. And on #GivingTuesday we give back. In response to the consumer-centric holiday shopping season, the 92nd Street Y (92Y), a nonprofit cultural and community center in New York City, launched #GivingTuesday in 2012 as a one-day event to kick off the holiday giving season on the Tuesday after Thanksgiving. In 2015, that day was December 1. #GivingTuesday's purpose, then and now: to build on the collective power of a unique blend of partners—charities, families, businesses, individuals—to transform how people give. Each year, Havas PR's creative work to boost #GivingTuesday messaging has exponentiated as more people and organizations join the cause. In 2015, we served as its lead agency in the U.S. The ask from our client:

Build awareness through significant media placements that encourage partnerships and drive donations from corporations and communities.

Position 92Y in top-tier media as the innovator behind this movement and a thought-leader reimagining community for the 21st century.

Secure feature stories in major national newspapers and magazines, coverage on broadcast network news and radio, plus a major media partnership that would yield multichannel, multiplatform activations, native and commercial promotions and activity of talent.

Make #GivingTuesday the "Super Bowl of Philanthropy"—a day, event and movement that permeates the media and popular culture as a "must-do."

As #GivingTuesday's agency partner and with the aforementioned goals in mind, we activated around three core strategies:

1. Make partnering easy: Provide partners with the tools they need to join in the movement.

Provided individual attention and assistance to partners on a need basis to support their cause and streamline their participation process.

2. Educate the community: Help people easily identify ways that they can participate locally, nationally or internationally.

Assisted with the development of a PSA.

3. Saturate the media on a national and local level by promoting #GivingTuesday and its leaders, as well as participating partners of all sizes.

Utilized leaders as spokespeople to reinforce 92Y's position as a community influencer and its evolution into a global change agent.

Leveraged celebrity-founded organizations and/or spokespeople to amplify coverage and awareness.

Created an engaging infographic that brought the success of #GivingTuesday to life.

Our approach to U.S. media relations stretched over three phases—from June to August, September to November, and December.

In phase one we conducted long-lead outreach that was rich with philanthropic storytelling, connected with every major broadcast affiliate and numerous contacts to uncover a media partnership (which we secured with MSNBC), and created or contributed to the creation of many of the materials (fact sheet, logos, partner toolkit, etc.) and messaging that would be critical in the months to come.

In phase three—one month out—media contacts we'd been in conversation with for months began to formulate their stories, and we packaged interesting angles around retail and tech campaigns taking place nationally and notable civic work planned on the local level. A week prior to #GivingTuesday, we organized a solid staffing plan, and all Havas staff members on the #GivingTuesday account worked through Thanksgiving weekend to ensure that all incoming requests were handled within one hour. On #GivingTuesday itself, the Havas PR team was all hands on deck, manning media requests from command central at 92Y and the Havas offices, and securing interviews with key media.

In 2015, 698,961 total donors contributed to #GivingTuesday, and participation and charitable giving increased by leaps and bounds; $19 million in 2013 became $45.68 million in 2014, which grew into $116.7 million in 2015. Additionally, the media coverage we earned solidified #GivingTuesday's standing as a major holiday. USA Today cited how the movement has grown into a worldwide effort with celebrity supporters and year-over-year growth; NPR likened it to Black Friday, Cyber Monday and Small Biz Saturday; and Reuters highlighted how it has made thinking of others a priority on this day.

More highlights: President Obama included mention of #GivingTuesday in his weekly address, and the Bill and Melinda Gates Foundation became involved and helped to shape the #MyGivingStory contest. The Smithsonian's National Museum of American History even opened a "Giving in America" exhibit to celebrate philanthropy.

In the first week of December alone, Havas PR secured nearly 432 placements versus 122 placements generated in 2014. Including all print, online and broadcast mentions, we were responsible for earning more than 1.5 billion impressions. Coverage appeared in outlets such as Baltimore Sun, CBS, CNBC, CNN.com, Food Network Magazine, Fortune.com, Fox.com, TheHill.com, HuffPost, InStyle, Mashable, NBC.com, Parade, Reuters, Rutgers Magazine, Self, Time.com and Women's Wear Daily. Plus, we coordinated segments with the producers of the "CBS Evening News with Scott Pelley" and MSNBC's "The Last Word with Lawrence O'Donnell."

We had spread the word and inspired a diverse national community. #AllGood.

Video for #GivingTuesday: The Day the World Gives Back 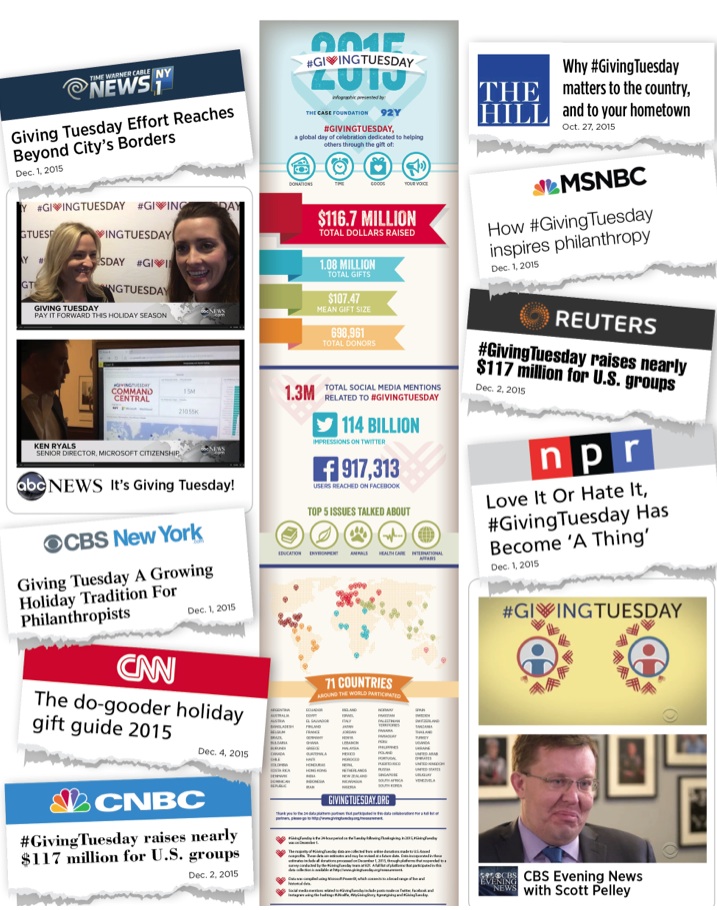