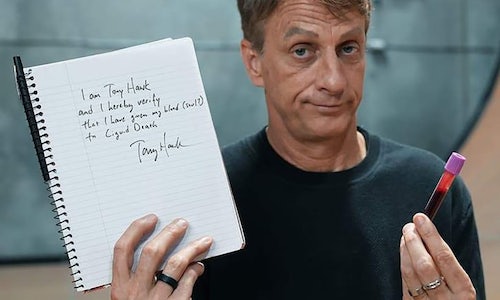 Our client Liquid Death asked us to help them announce their partnerships with some celebrity brand ambassadors. And, of course, they wanted to do it in a way that only Liquid Death could. Our objective was to exceed the client’s expectations and make this a fun, memorable stunt that would get people talking and wanting to be part of a fun program involving two influencer brands.

What does it take to be a Liquid Death brand ambassador? Just fearlessness—and the surrender of your immortal soul. The canned water brand sought a new ambassador who’s just as fearless as it is, and pro skater Tony Hawk seemed like a good fit. And since he didn’t read the fine print on his contract, his blood is mixed into the paint of 100 limited-edition Tony Hawk Blood Boards.

Taking a page from the KISS marketing playbook, the company took advantage of that loophole and collected some of Hawk’s bodily fluid and mixed it into the paint on 100 limited-edition skateboards. The $500 Tony Hawk Blood Boards sold on Liquid Death’s site in under 20 minutes, and many resold later on eBay for more than $3,000.

In a making-of video, Hawk talks about how some of the profits will go toward killing plastic pollution and building skateparks in underserved communities. But the party didn’t stop there. Things were taken to the next level when pop star Lil Nas X tweeted about the boards with his now-famous phrase, “Nah, he tweakin.”

Our integrated, multi-component, pop-culture-infused campaign got everyone’s blood pumping. Liquid Death sold out the 100 boards at its site in 20 minutes and many resold later on eBay for more than $3,000. Every aspect of the program was captured for social media, and so many new memes flooded social media that it nearly broke Instagram. The video and the celebrity blood feud resulted in more than 190,000 social posts, mentions in 240 stories and 885 radio/TV broadcasts, 15.5 billion PR impressions, and 1.6 trillion (with a capital T) social impressions.

It’s possible to throw tons of money into a brand and buy your way to positive results, such as increased consumer awareness. However, we feel it’s more fun, memorable, and effective—not to mention responsible—to engage your audience to play along and help build buzz. Liquid Death and Tony Hawk are both brands that people are passionate about. Pairing them for Tony Hawk Blood Boards proved that their combined worth is even more valuable than the sum of their parts.

Video for Tony Hawk Blood Board 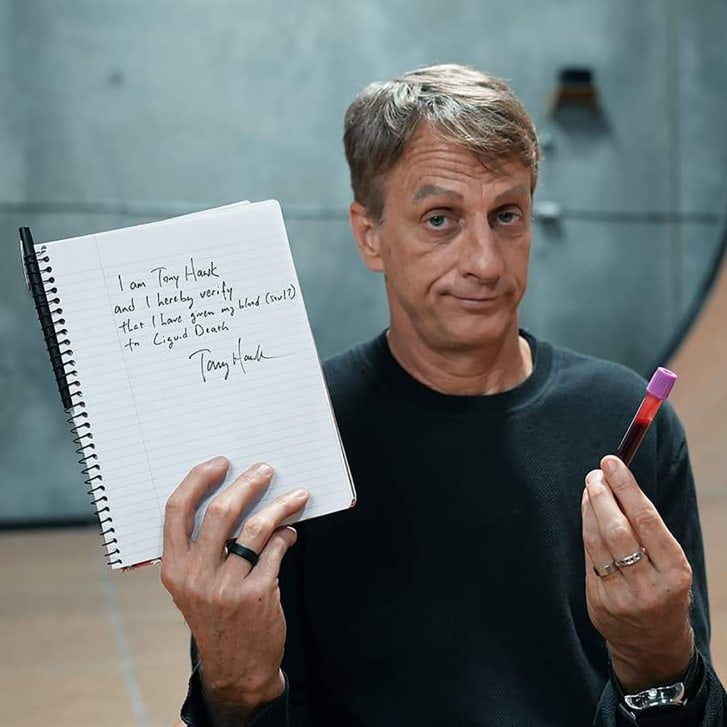