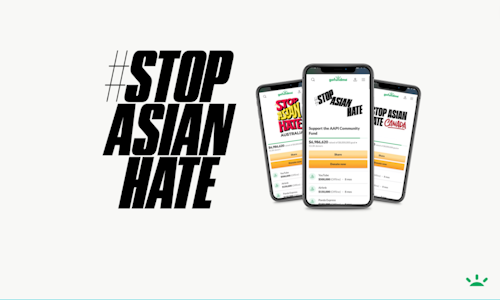 In early 2021, there was a shocking rise in violence directed against Asian Americans. Following these events, GoFundMe saw the opportunity to use our voice and platform to make a difference for those who were being affected. So we built a multi-channel fundraising campaign rooted in viral social sharing. Our mission: to create a unified home where people around the world could come together to condemn the surge in hostility & violence, donate to organizations focused on creating lasting social change for the AAPI community, and easily share "how to help" across their social channels.

To kick off this initiative, the GoFundMe team outreached to several influencers in the AAPI space—a fashion designer, a filmmaker, and several more well-respected leaders. We wanted to hear their stories, their struggles, and their vision for how GoFundMe could help make a difference. We wanted our strategy to be a collaborative union that felt authentic, impactful, and trustworthy to the entire Asian American community. The AAPI Community Relief Fund was born on that call.

Prior to launch, GoFundMe identified & coordinated with dozens of Asian American celebrities who would help amplify the campaign, our hashtag (#StopAsianHate), and drive traffic to the fundraising landing page. On March 1, 2021, we went live and dozens of these influencers posted our creative, our message, and our official fundraising hub to their social channels.

To support organic resharing, the GoFundMe team added a "social toolkit" to the AAPI landing page—filled with social-sized graphics that users could easily download and upload to their own social channels. Dozens more influential celebrities and thousands of everyday people began spreading these branded graphics and our call to action. Within a few hours, #StopAsianHate and our AAPI Community Relief Fund were trending across Twitter with no paid media or ad promotion.

Through a coordinated social, comms, and marketing effort over the next few months, we continued to create content that would drive awareness for the Fund even further. We partnered with Eugene Lee Yang (of The Try Guys on Buzzfeed) to host an in-depth conversation on Anti-Asian hate and racism on Youtube. We worked alongside Bao Nguyen to produce our own intimate film narrated by Asian American celebrities focused on the history of AAPI violence and discrimination in America. We created branded #StopAsianHate gifs that could be reshared on users’ Instagram Stories and on Snapchat to make sharing more engaging. We teamed up with Victo Ngai to celebrate Asian Heritage Month by commissioning 60 hand-painted pieces of art to be displayed across the Bay Area. We repurposed individual moments of violence and discrimination against the community to drive more traffic to verified fundraisers supporting victims and survivors. No matter the medium, every piece of content had a clear call to action that linked to the AAPI Community Relief Fund.

Over the course of 8 weeks from March 1 - April 30, 2021, GoFundMe's social channels gained more than 40K followers. On Twitter, engagement increased by more than 420%. On Instagram, our profile visits increased by 210%.

The original US AAPI Community Relief Fund was started with a goal of $500,000. Within just a few short weeks, nearly 2 million people visited our #StopAsianHate landing page. To date, it’s raised over $7 million.

Due to the overwhelming success stateside, we turned this campaign international—creating identical AAPI Community Funds in the UK (spearheaded by Gemma Chan), Canada, and Australia that could benefit local nonprofits and fundraisers in those markets. We ran the same playbook and worked with dozens more AAPI influencers. With support from across the globe, we created an international movement to spread love, stop hate, and make a lasting impact. 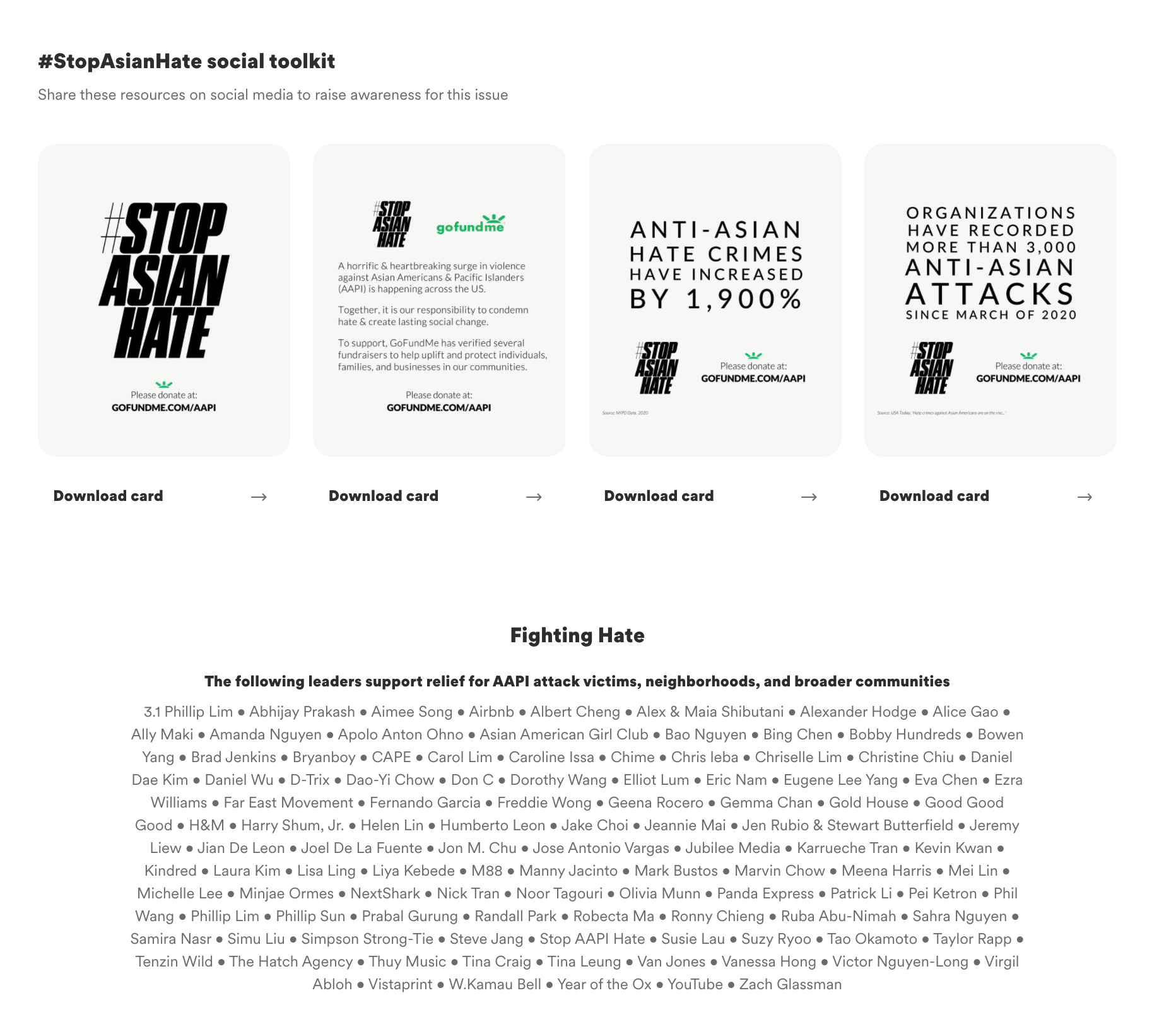 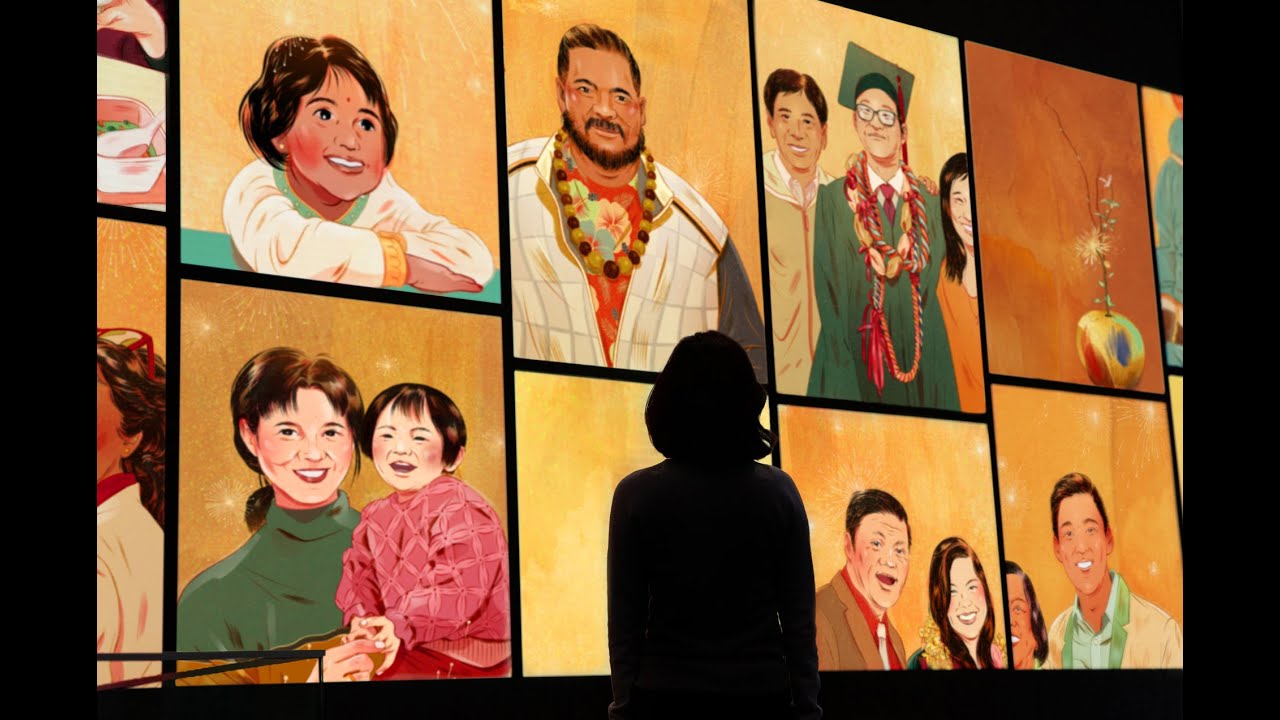 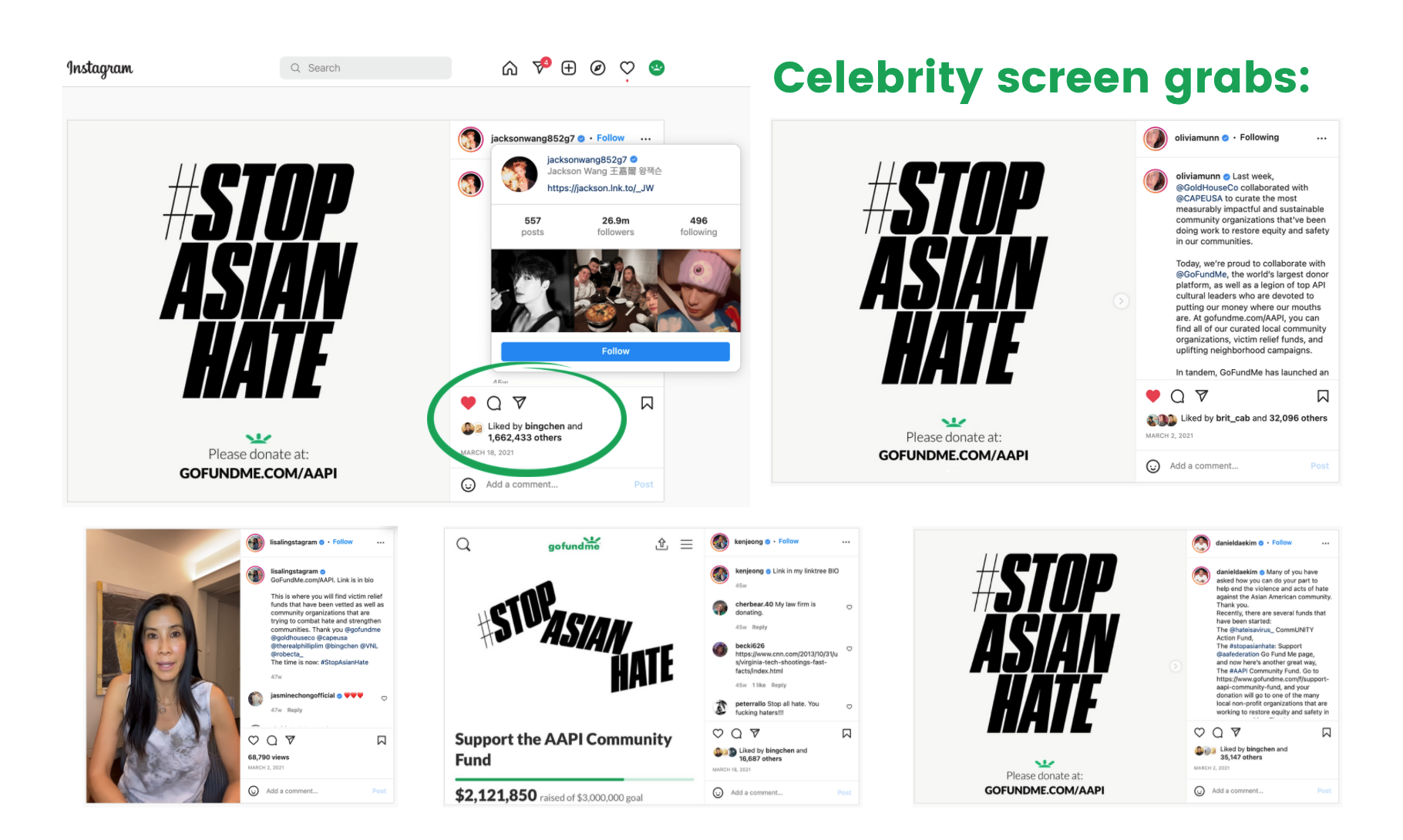 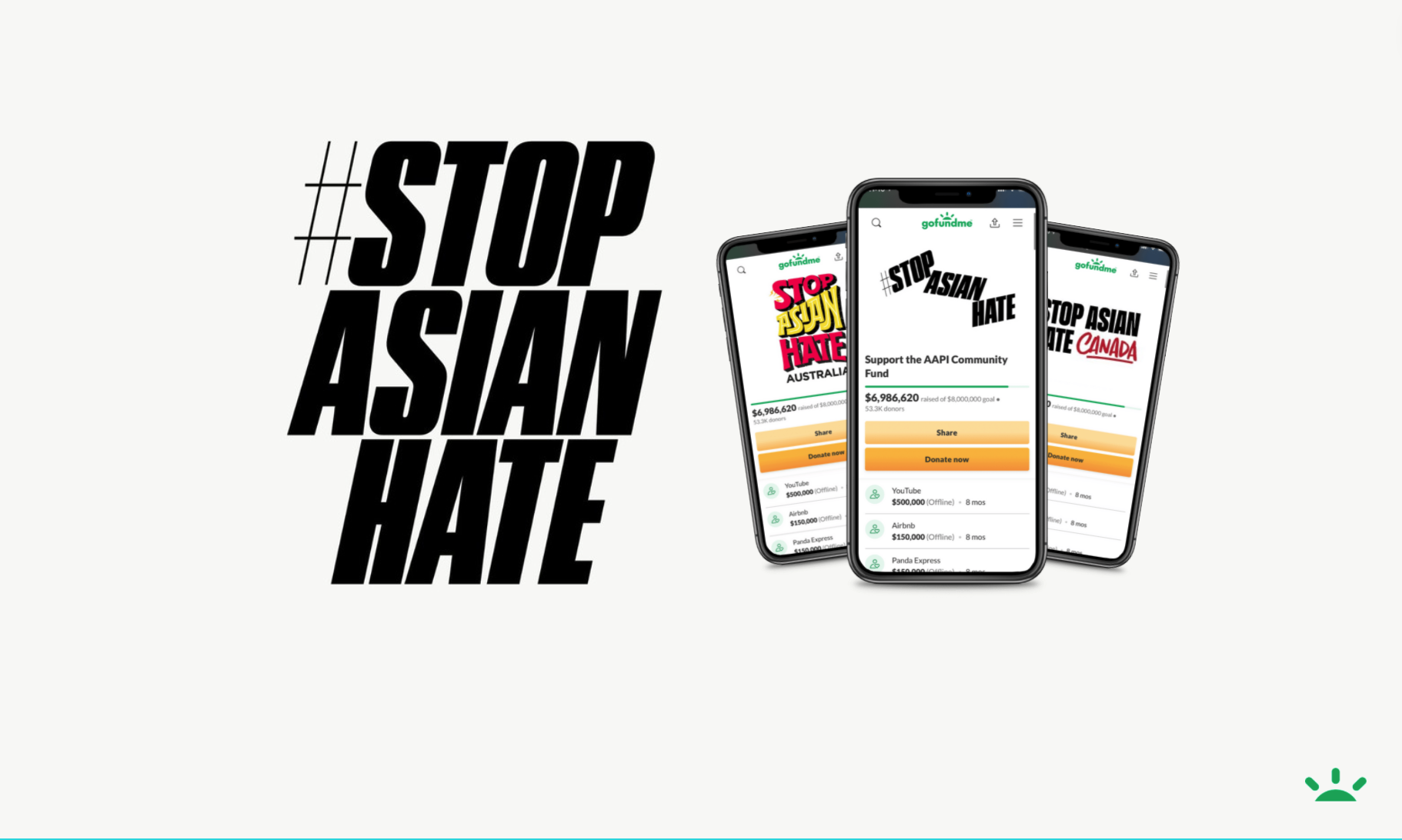 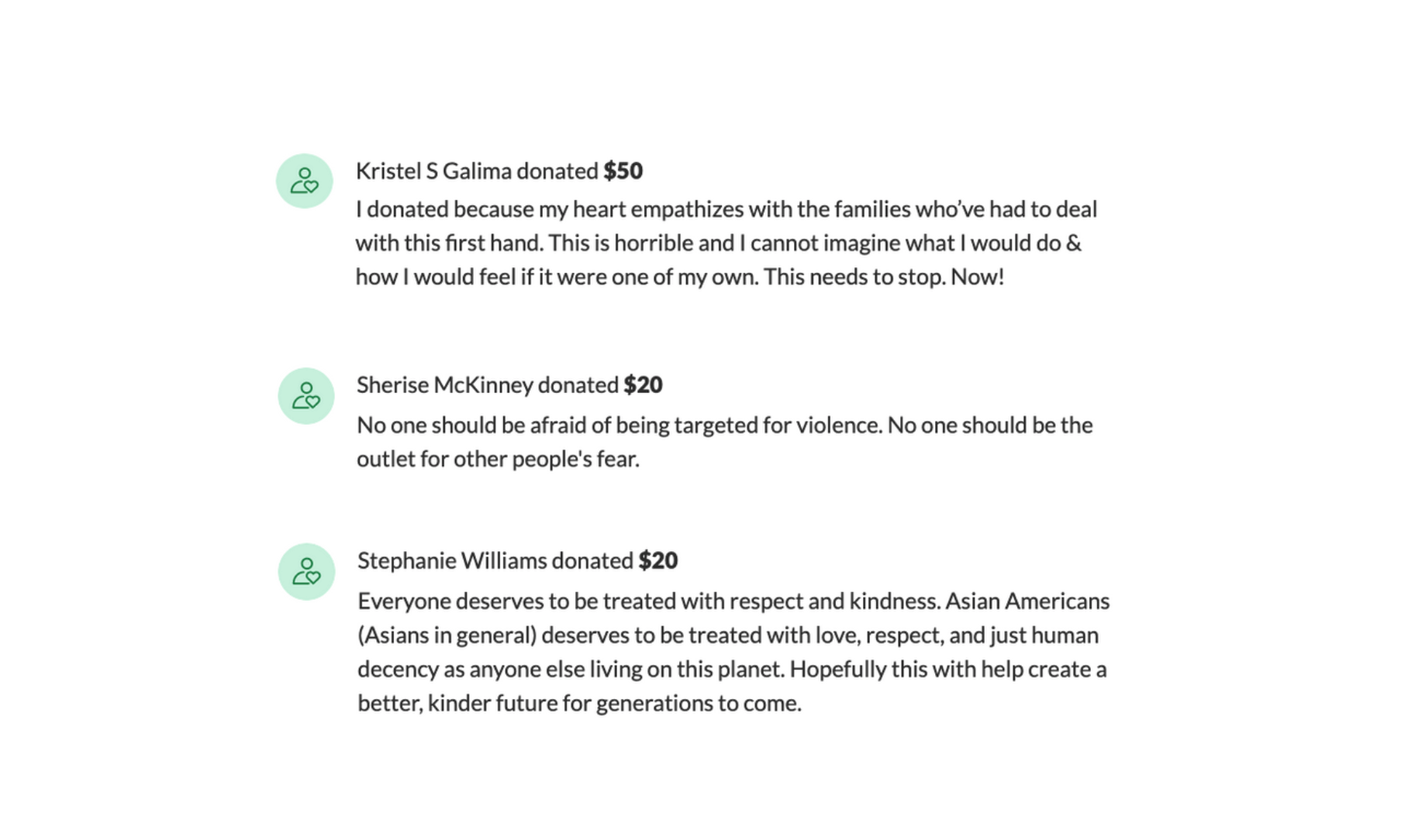