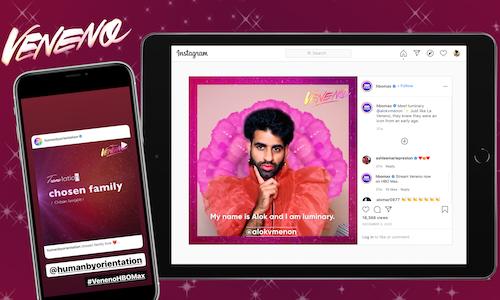 Veneno - Educating Through An Icon

Based on the memoir by Valeria Vegas “Not A Whore, Not A Saint: The Memories of La Veneno,” the show brings the most beloved transgender icon of the 90s, Cristina Ortiz (La Veneno) to 2020. The HBO Max series follows Valeria, a young journalism student who discovers she has more in common with La Veneno than she thought.

The goal was to create an impactful cultural moment around gender identity for the trans and LGBTQ+ communities, to celebrate the life and story of La Veneno – while sparking meaningful dialogue and connection on behalf of the new series telling her story. An inclusive creative experience would be designed and optimized to generate social media impressions and engagements – to demonstrate community connection to this celebration and the show at its core.

Increased visibility for the trans community through the work would create relevant, timely cultural impact. We could also strengthen brand ties to and within the LGBTQ+ community by highlighting characters in the series, their lived experiences and their relationships with each other.

Social media is culture’s arena for both diverse voices and ascending icons. In harnessing social channels to expand the audience for Veneno on HBO Max, our campaign created awareness around one of the greatest trans icons in the world: La Veneno herself. And in paying homage to the legend inspiring the show, the creative surfaced and humanized today’s transgender and non-binary experiences.

We crafted strategic partnerships to produce a content series featuring prominent, impactful members of the trans community in the LGBTQ+ space – designed to break the echo chamber of owned media properties and extend reach to like-minded and targeted audiences. As the core of the message, testimonial-style social vignettes and shareable content translated the microaggressions and affirmations the trans community hears and sees everyday.

We recognized that this campaign could not only be about telling these vital stories; the collaborative effort took concrete steps towards normalizing the actual, breathing bodies and presentations of the individuals who actively live these stories. What’s so rarely shown on screen is how vast a tapestry of varying visibilities and intersectional experiences transfolx have — there is no one-size fits all. Some pass, some do not. And some, by virtue of myriad factors, never will or even want to—nor should they have to. And that, we felt, deserved some visibility of its own.

In a reflection of what La Veneno had already accomplished for gender identity and equality progress, we partnered with a trio of trans influencers of color – with an eye towards non-binary or gender-nonconforming talent in particular – to co-create a brave space for sharing. At once disruptive and wholly authentic to themselves the content felt as natural and everyday as it felt bold. We enlisted actor/model Indya Moore, writer/performance artist Alok Vaid Menon, model/activist Laith Ashley as well as dancer Leiomy Maldonado to bring our campaign to life. In the content, HBO Max asked these role models to provide present-day advice for their younger selves inspired by La Veneno and Valeria’s relationship. The advice was designed for the younger trangender community while simultaneously delivering tangible community truths for the masses.

The launch of La Veneno on HBO Max offered a timely opportunity to explore the life of a trans icon, as well as to create a campaign around gender diversity which educated followers through the stories and experiences of modern trans champions.  The co-creation of the educational, entertaining digital campaign yielded content reflecting three kinds of cultural capital:

The campaign ultimately expressed present-day guidance for young people in the process of self-identifying.

The results reflect a conversation sparked in the LGBTQ+ community and beyond, garnering mass attention and celebrity engagement while supporting tune-in for the show.

From Janelle Monae's comment on Indya Moore's Human By Orientation Peacock Moment to Kevin McHale's custom peacock GIF and beyond, the content awakened discussion between icons to unlock measurable results. 126 pieces of content drove 85,601 social engagements and 3,378,710 impressions to date.

Video for Veneno - Educating Through An Icon 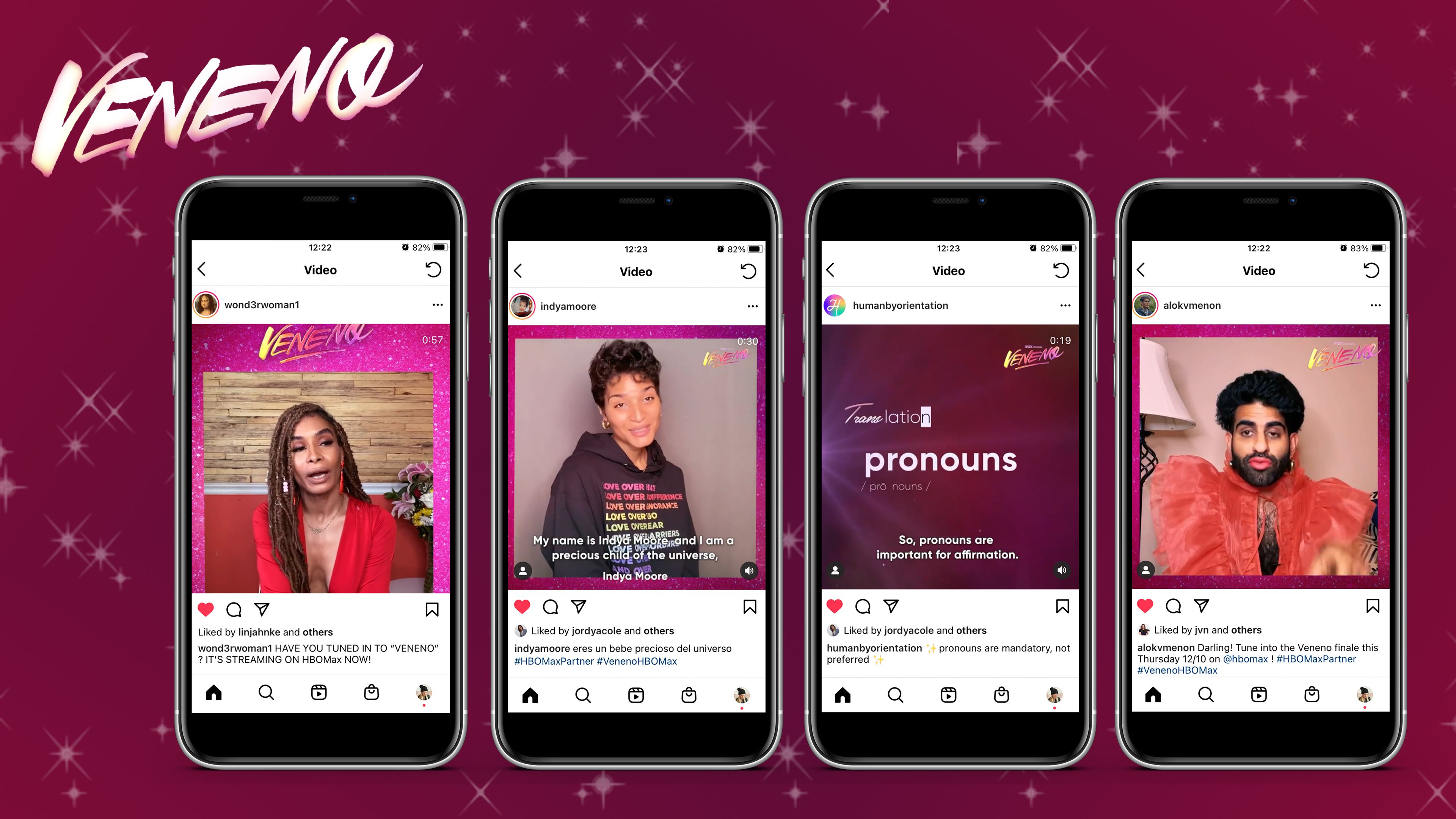 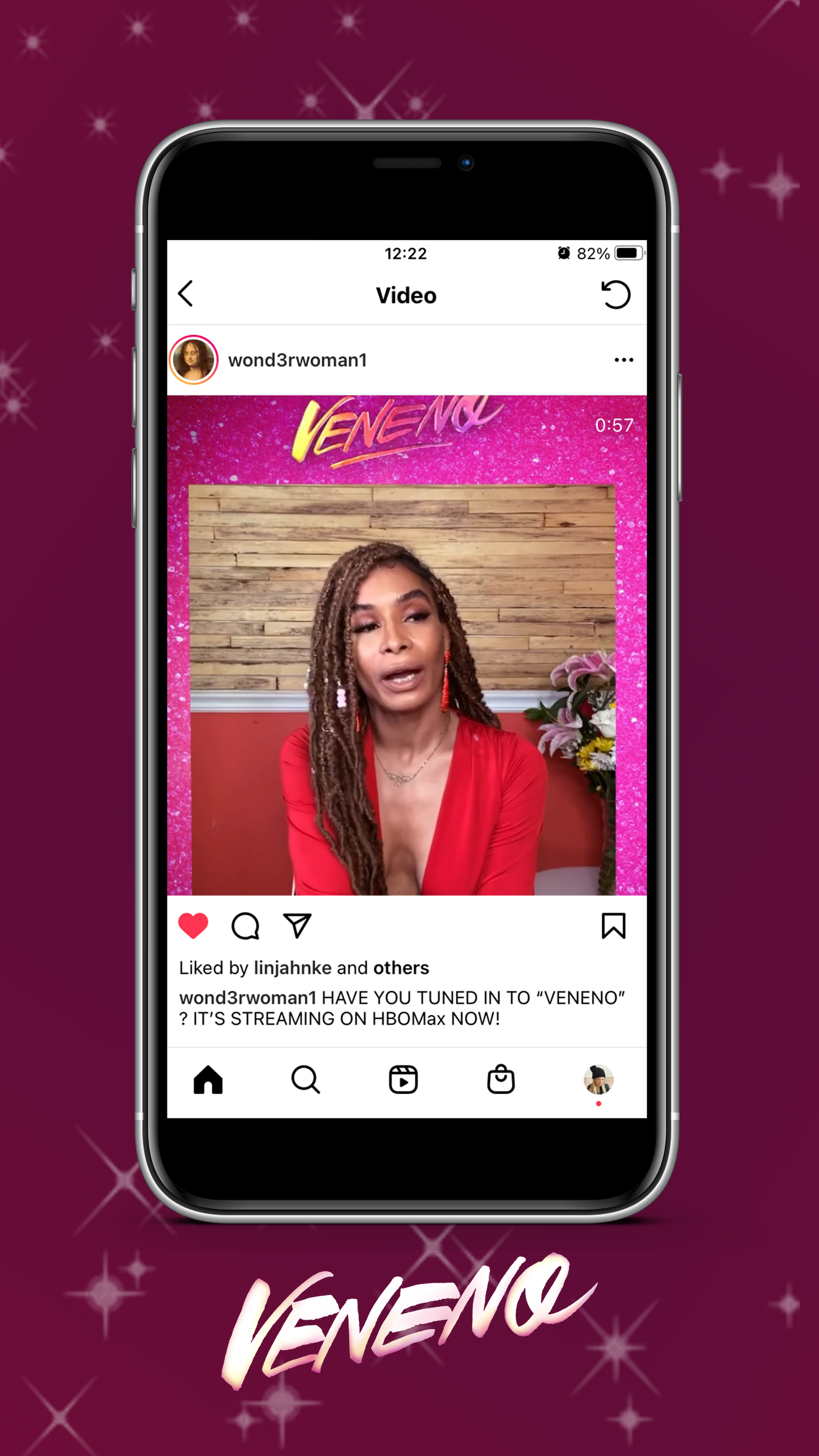 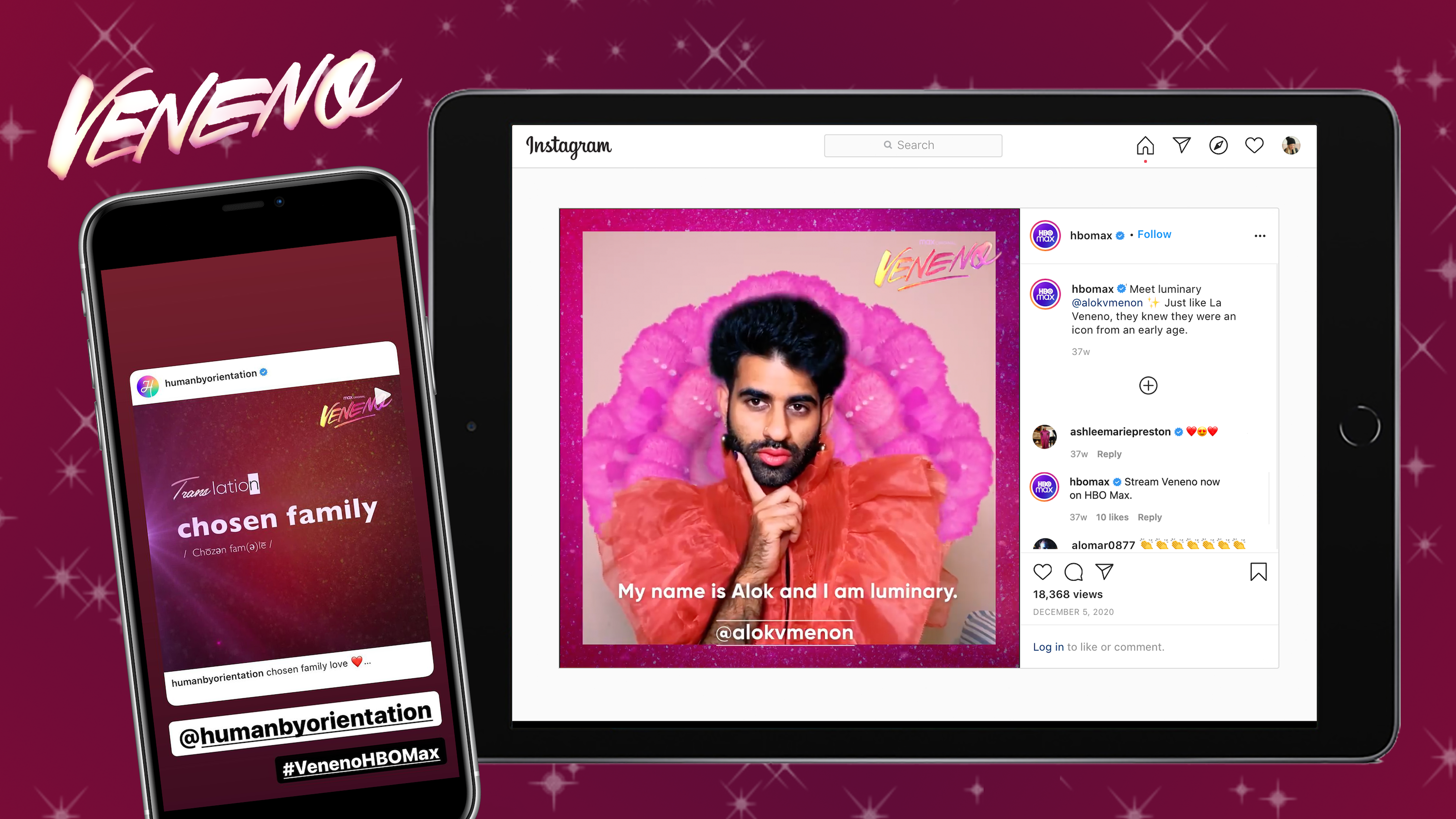 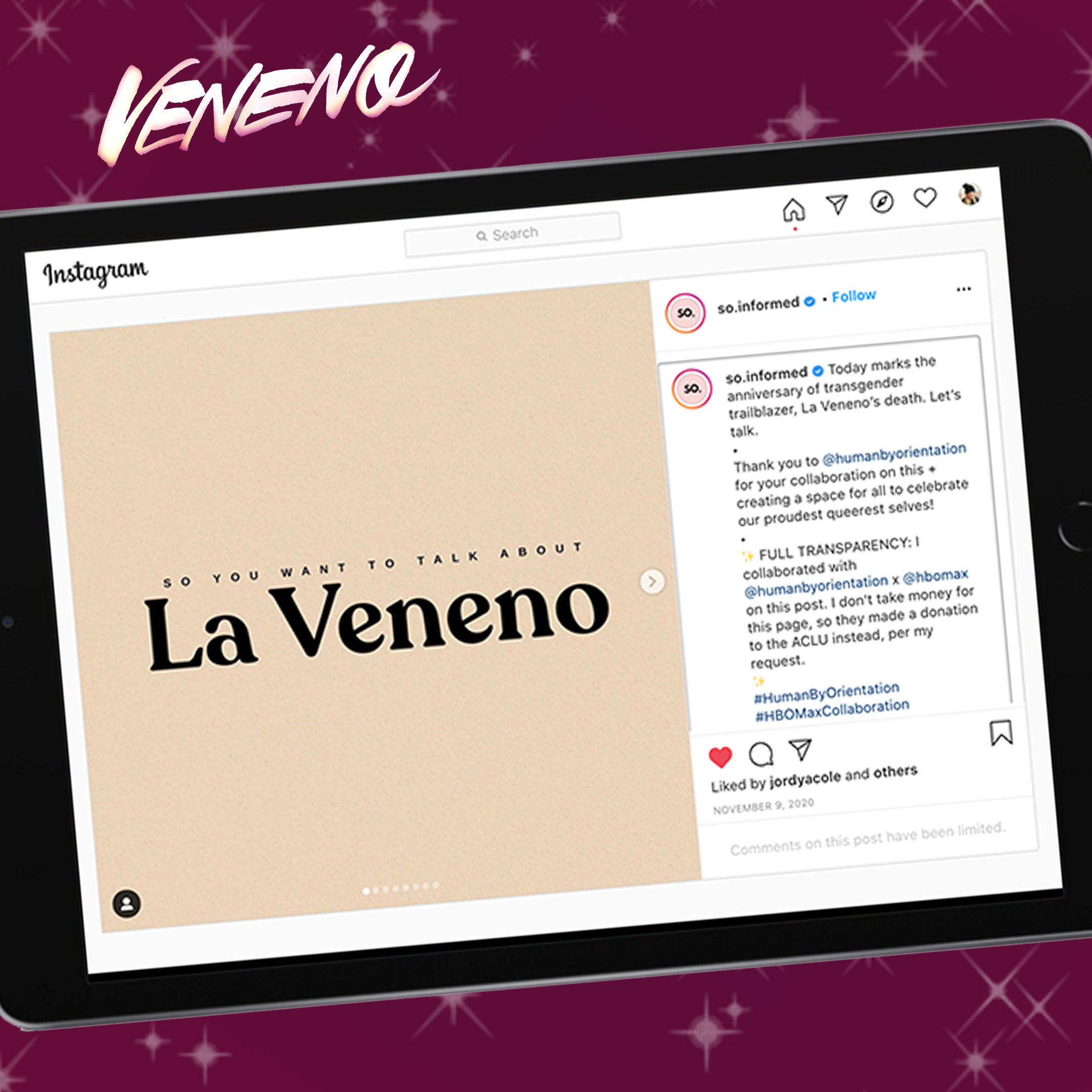 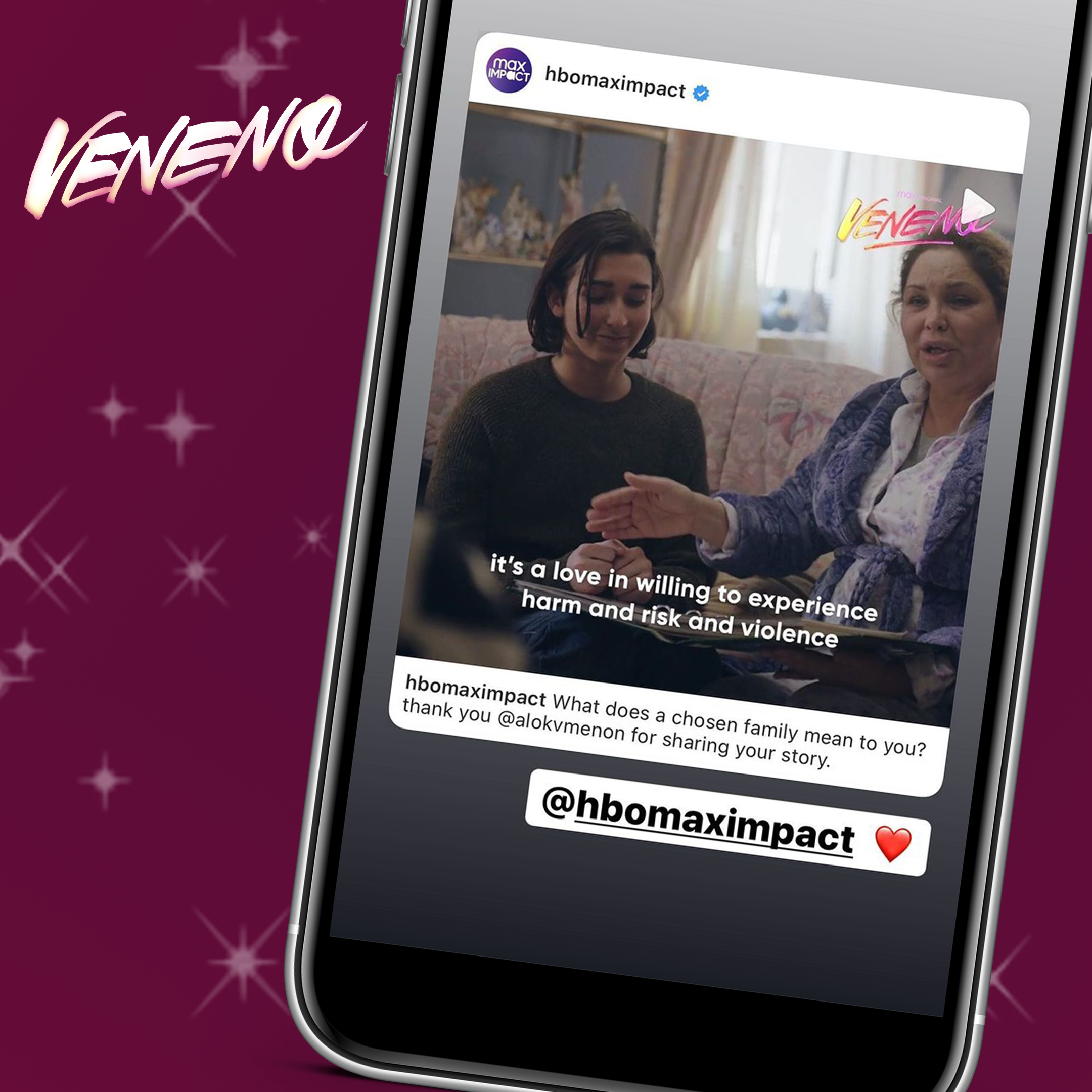 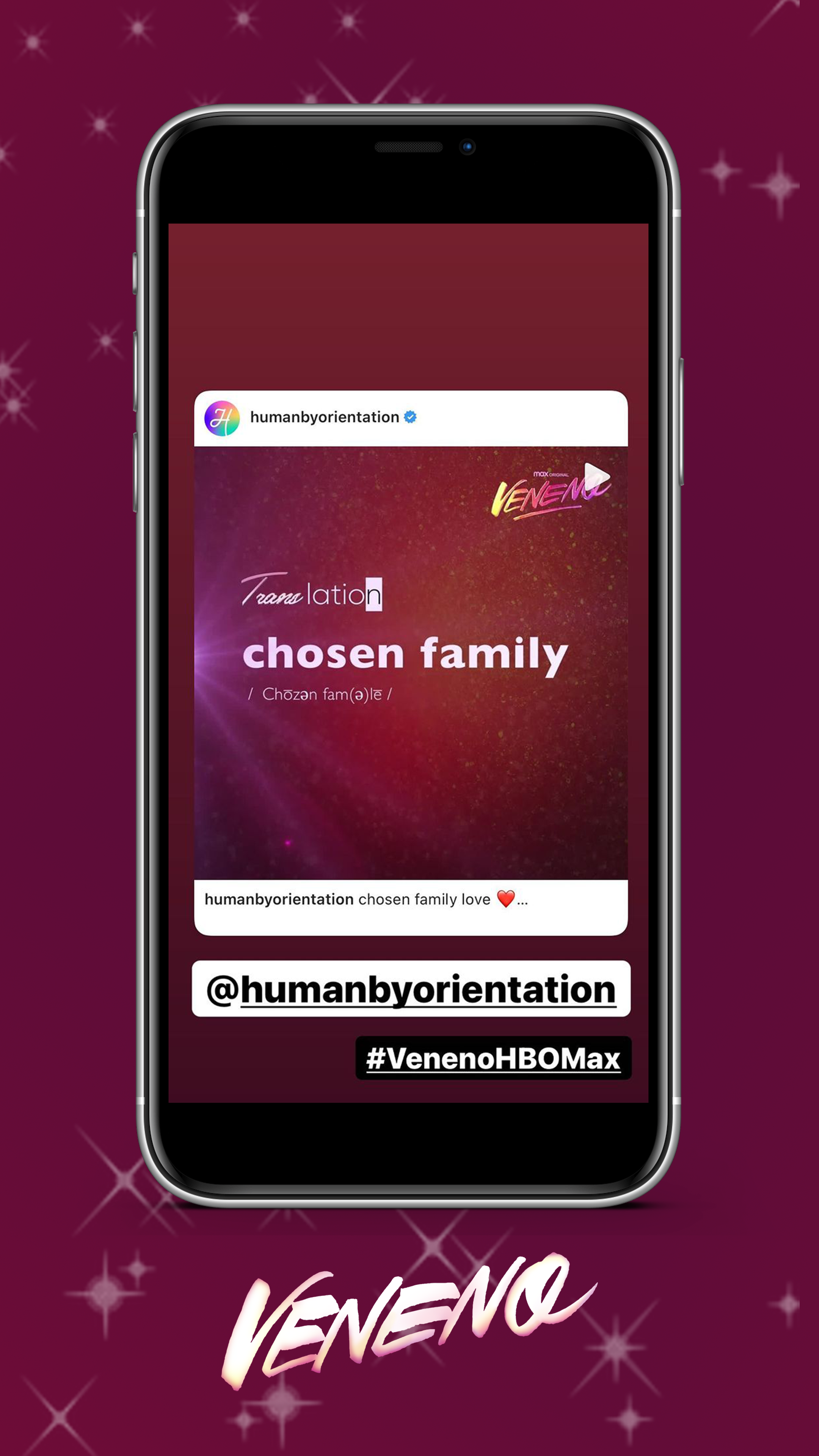