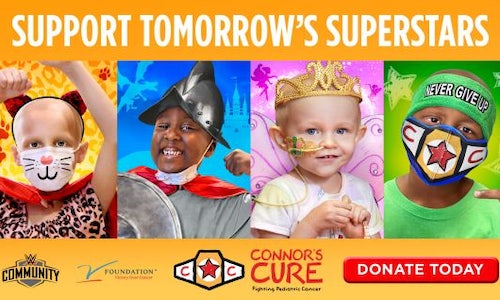 By rallying the entire WWE Universe, WWE is helping to provide resources, strength and hope to those battling critical and life-threatening illnesses. During Pediatric Cancer Awareness Month in September 2020, longstanding partners The V Foundation for Cancer Research, a top-rated cancer research charity, and WWE announced their campaign to raise money for pediatric cancer research through Connor’s Cure.

The “Support Tomorrow’s Superstars” campaign featured pediatric patients dressed as their favorite WWE Superstars or dressed in their own WWE Superstar personas, including Lance “The Tumornator,” “Superman” Jimmy, “Krazy Kelsey” “Princess Hannah,” “Lillian The Feline Fighter” and “Tristian The Titan.” WWE partnered with Ryan Seacrest Studios and the following hospitals to produce photo and video content from inside the hospitals for PSAs and digital creative:

WWE also hosted the Connor’s Cure Superstar Challenge. WWE employees, family, friends and the WWE Universe participated by walking or running any distance at any time and any place to raise funds for pediatric cancer research. The fundraiser raised $15K with 12 teams and 88 participants.

- Dick Vitale and the V Foundation announced $1.8M in grants being awarded to fund pediatric cancer research. Of the $1.8M, WWE/Connor’s Cure and Dick Vitale provided $900K each 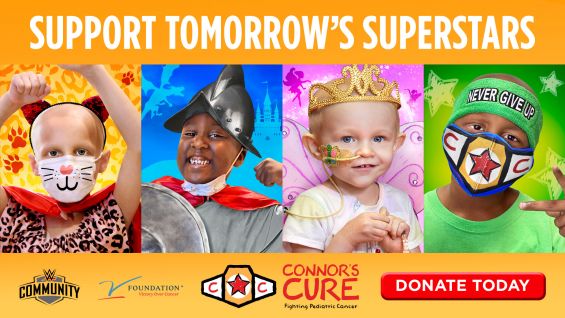