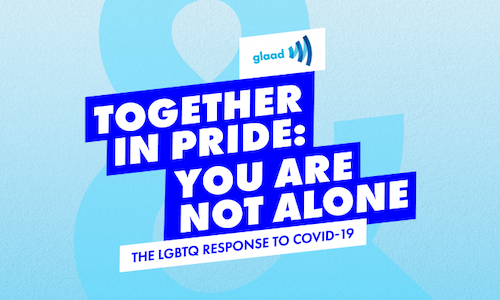 GLAAD's "Together in Pride: You are Not Alone"

GLAAD, the world’s largest lesbian, gay, bisexual, transgender, and queer (LGBTQ) media advocacy organization, operates to accelerate acceptance for the LGBTQ community through advocacy and activism. At the beginning of the COVID-19 pandemic, GLAAD recognized the unique and disproportionate challenges facing LGBTQ people during this unprecedented crisis. From the closure of LGBTQ safe spaces like community centers and bars, to many LGBTQ youth being forced to isolate in homes that are not affirming, to the heightened vulnerability of LGBTQ people to COVID-19, the impact of the pandemic on LGBTQ people has been far-reaching. On April 26, GLAAD responded by hosting a digital event called “Together in Pride: You are Not Alone,” which highlighted the LGBTQ response to COVID-19 and raised money for CenterLink and local LGBTQ centers affected by COVID-19. During the pandemic, LGBTQ community centers are still providing critical services such as medical care, shelter for homeless LGBTQ youth, mental health counseling, and more. As a result of the pandemic, LGBTQ community centers became financially vulnerable and were at risk of having to shrink their services, meaning two million LGBTQ people who use the centers each year could go without care and community. The goal of this event was to raise necessary funds to ensure that LGBTQ community centers could continue to provide critical services to LGBTQ people. The event also aimed to send necessary messages of support, solidarity, and community to LGBTQ people across the world, as well as the heroes on the frontlines battling this pandemic.

To make “Together in Pride: You are Not Alone” a success, GLAAD utilized its various networks of partners, talent, and media to ensure that the event reached the widest audience and raised the greatest amount of funds possible. To start, GLAAD brought in actor and producer Erich Bergen to direct the event and served as an Executive Producer with GLAAD staff. GLAAD worked to specifically center the voices and stories of LGBTQ frontline workers during the event, including the executive directors of local LGBTQ centers who are offering direct services to LGBTQ people in need, as well Dr. Darien Sutton, a gay doctor in New York who is on the front lines of COVID-19. Also, as a leading LGBTQ organization, GLAAD made it a priority to spotlight several other key LGBTQ issues through the event, including what’s at stake in the upcoming election and the importance of eliminating stigma facing people living with HIV.

GLAAD’s Communications team also worked to ensure that messages from the evening were spread far and wide through mainstream media. Prior to the event, GLAAD secured official media partnerships with over 15 mainstream media outlets, including Bustle, Entertainment Weekly, Los Angeles Blade, LGBTQ Nation, Logo, Metro Weekly, NBC Out, People, Pride Media (Advocate, Out, Pride.com, PLUS), Queerty, The Randy Report, them, Thomson Reuters Foundation (Openly), Washington Blade, and Windy City Times. These outlets helped to share GLAAD’s “Together in Pride: You are Not Alone” livestream across their social channels, sending messages of acceptance and affirmation to the LGBTQ community.

“Together in Pride: You are Not Alone” was a massive success, raising over $230,000 for the LGBTQ community centers that are members of CenterLink. Since so many LGBTQ people, especially LGBTQ youth, depend on support from local community centers around the country, this event was pivotal in bringing our community together to ensure that all LGBTQ organizations can continue their life-saving work and ensure that LGBTQ people are not left behind.

On April 26, over 500,000 people tuned in for parts of the original broadcast, which streamed on YouTube, Facebook, and clips on GLAAD’s Twitter in real time. Messages of love, acceptance, and support sent throughout the evening garnered over 1.1 billion media impressions with exposure in more than 100 media outlets across broadcast, print, digital, and social, including major headlines in USA Today, Deadline, The Hollywood Reporter, Reuters, Entertainment Weekly, E! Online, Billboard, and so many more. With messages of support from stars including Billy Porter, Barbra Streisand, Lillu Singh, Billy Porter, Billy Eicner, Mayor Pete & Chasten Buttigieg, Rosie O’Donnell, Wilson Cruz, Adam Lambert, Dan Levy, Tyler Oakley, Bebe Rexha, Brian Michael Smith, Jonathan Van Ness, and so many others, GLAAD was able to show LGBTQ people, and especially LGBTQ youth, that during this unprecedented crisis, there are so many people, both LGBTQ and allies, who are working to ensure that no LGBTQ person is left behind.

Video for GLAAD's "Together in Pride: You are Not Alone" 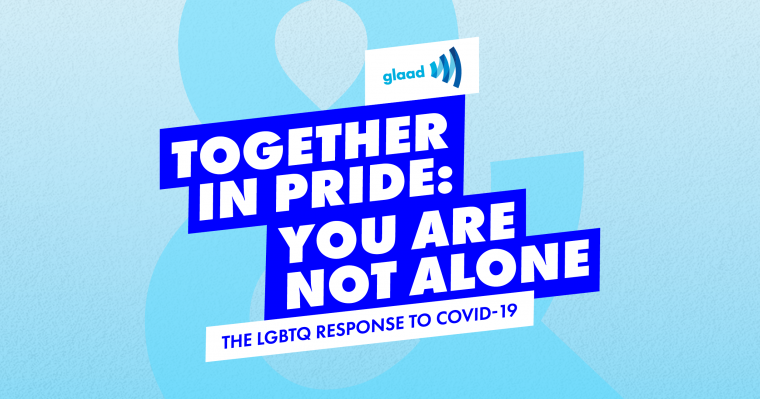 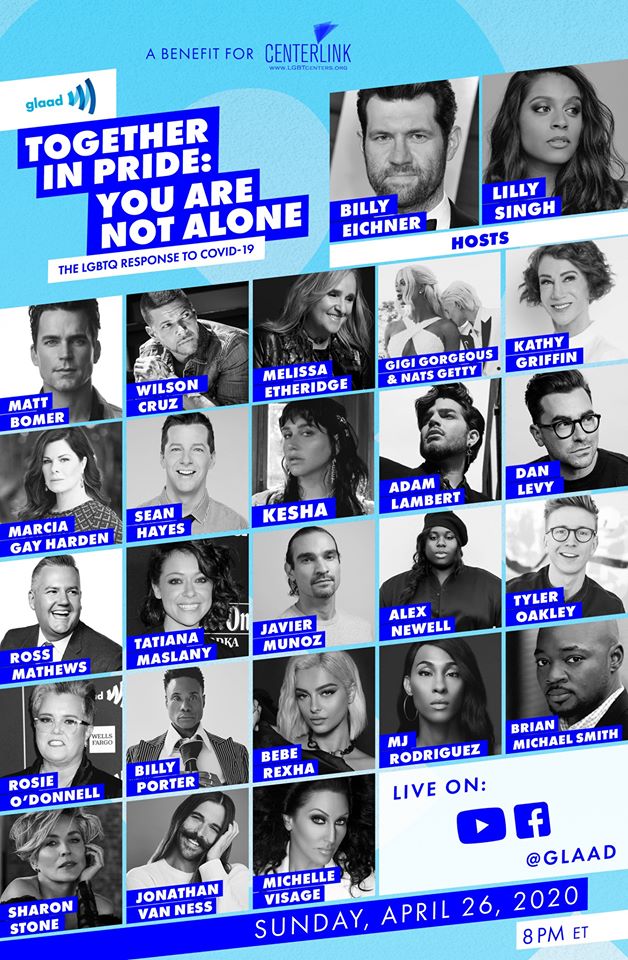