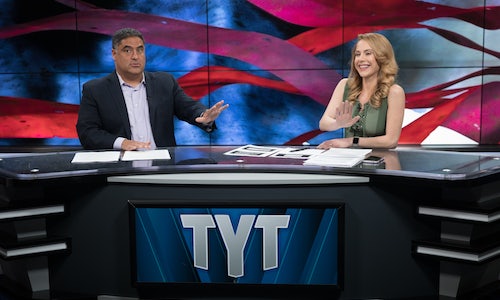 "Now, The Young Turks...is one of the largest and oldest online news shows, netting subscriber numbers that would be the envy of broadcast networks," wrote Roger Yu for USA Today.

The Young Turks is the flagship show of TYT and is the largest online news show in the world hosted by Cenk Uygur, Ana Kasparian, and John Iadarola. The Young Turks speaks truth to power in their daily live coverage of news and politics and prides itself in delivering the news, “To pursue truth, drive social change, and become a digital campfire around the world.”

The Young Turks covers the issues that everyday Americans care about, constantly challenging the status quo, holding the government accountable, and empowering individuals with the tools they need to make a difference. Their storytelling is elevated by the support of an engaged audience called the, 'TYT Army.' During the live daily news show, hosts also spend time responding to comments by the audience using the hashtag #tytlive on Twitter, on YouTube SuperChat, and member comments.

In 2019, The Young Turks positioned itself as a necessary campaign stop ahead of the start of the Democratic Presidential Primary race. The show expanded to three hours with a new segment called, 'The Conversation.' The third hour typically features interviews, debates, and panel discussions with thought-leaders, politicians from the left and right, media personalities, policy makers, and influencers.

The Young Turks has over 4.6 million subscribers on YouTube and growing! It is also part of a network that is 3.5 times more engaging than the average video on YouTube, beating Fox News, CNN Politics, ABC, and MSNBC.