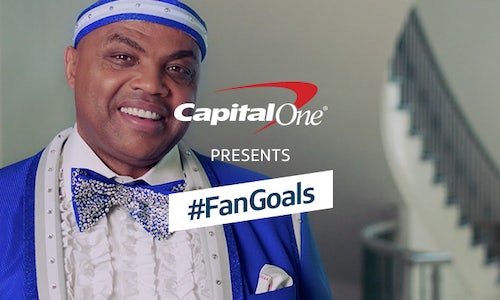 Awareness campaign focused on making Capital One the most famous brand by share of voice during the tournament.

To be the king of the court, Capital One needed to be relevant and effective during March Madness, embracing fans’ #FanGoals. To do so, Capital One created buzzworthy content that authentically resonated with upmarket basketball fans, leveraging custom social assets on owned channels starring some of the biggest names in culture: Samuel L. Jackson, Spike Lee, and Charles Barkley. We suited up our MVPs, and created a campaign designed specifically for the most important people in the game…the fans. Everywhere they looked – Facebook, Twitter, Snapchat, Giphy, Instagram – Capital One was there capturing fans’ attention in fresh ways. From being one of the first brands in the world to use the Facebook AR ad unit, to giving fans an exclusive 360º tour of the Final Fourgasbord stadium, to an IRL giveaway of the Chuxedo seen in the campaign, Capital One was here for the madness.

Capital One delivered on the main goal of increasing share of voice by over 130% YoY. The brand owned the conversation, experiencing a 34% increase in one-to-one engagements and ad recall was up across primary social channels, Facebook/Instagram (+4%), Twitter (+6%) and Snapchat (+5%). The campaign not only got fans talking about the brand, the brand inserted themselves into fans social feeds everywhere, achieving 162.7MM impressions – 12% higher than the goal. So, while Virginia may have taken home the trophy, we like to think that Capital One was the true champion.