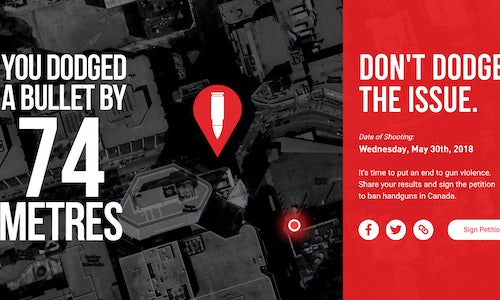 The Coalition for Gun Control was founded in the wake of the Montreal Massacre in 1989, one of the deadliest mass shootings in Canadian history. The Coalition was formed to support strategies to reduce gun death, injury and crime, and make Canada safer.

Despite the Coalition’s work, Canada has experienced a staggering rise in gun violence and shooting deaths in the last five years. The rate of gun-related crime has increased by 42% since 2013, and in 2018, the Toronto area experienced a record-breaking number of shooting homicides.

The reality is that, while the never-ending headlines generate concern among the citizens of Toronto, they have the unfortunate effect of normalizing gun violence. The Coalition wanted to ensure Torontonians weren’t becoming complacent in the face of an issue that seems to have no easy solution.

The all-too-common headlines about yet another shooting death are horrific. Yet, at the same time, as the headlines generate concern and even fear among Torontonians, they have two surprising and unintended consequences.

First, they start to make those incidents feel increasingly normal. What used to be a rare occurrence now feels commonplace and, as a result, there’s a risk that gun deaths will start to lose their impact.

Second, in a large city, the chance of any one individual being personally affected is low, which makes the impact feel a bit distant. People read a headline or hear a news report and feel shocked, but unless an incident happens close to home, it feels a bit removed from their own lives. But that response is false comfort, because the truth is that all of us have been too close to gun violence.

The insight: Gun violence is a lot closer to you than you realize.

Dodgethebullet.ca is a web and mobile app that transforms public-domain data into a compelling and highly personalized user experience that vividly demonstrates just how close Torontonians are to major gun violence.

To make the issue of gun violence leap from the theoretical to the personal, we created an experience that requires viewers to take one simple action: Type their home address into the search bar. That search immediately pulls the information from the Public Safety Data Portal and instantly calculates the distance to the nearest incident of gun violence. The user then sees a message that says, for example, “You dodged a bullet by 152 metres.”

By clicking on links to social media platforms, visitors to the site can share a satellite image of the city and its neighbourhoods, along with the prompt: Find out how close you were to a shooting. Automated post copy that users can build on in their social posts portrays the CTA ,“I dodged a bullet, but I won’t dodge the issue.”, followed by a link to the Dodge the Bullet experience.

The basis of our CTA was inspired by the goal of turning a well-known phrase used by Canadians every day into a tangible action of signing an e-petition to ban the civilian ownership of handguns and military assault weapons.

Users are further directed to triggerchange.ca where they are encouraged to message their Member of Parliament to call for a national ban on the civilian ownership of handguns and military assault weapons

The action at the core of dodgethebullet.ca is powerful because it’s universal: basic search. That tool provides all citizens with the ability to immediately understand how close guns are to their lives. Dodgethebullet.ca makes an issue that seems distant feel much, much closer to home.

Even though the website has only recently launched, it’s been picked up by CTV NEWS and there are already conversations about its potential to go far beyond the city that inspired it.

As Wendy Cukier, president of the Coalition for Gun Control, said, “There’s huge potential for Dodge the Bullet to be picked up by other communities outside of Canada as well. Many, many places around the world have the same problem we have.”

Video for Dodge the Bullet 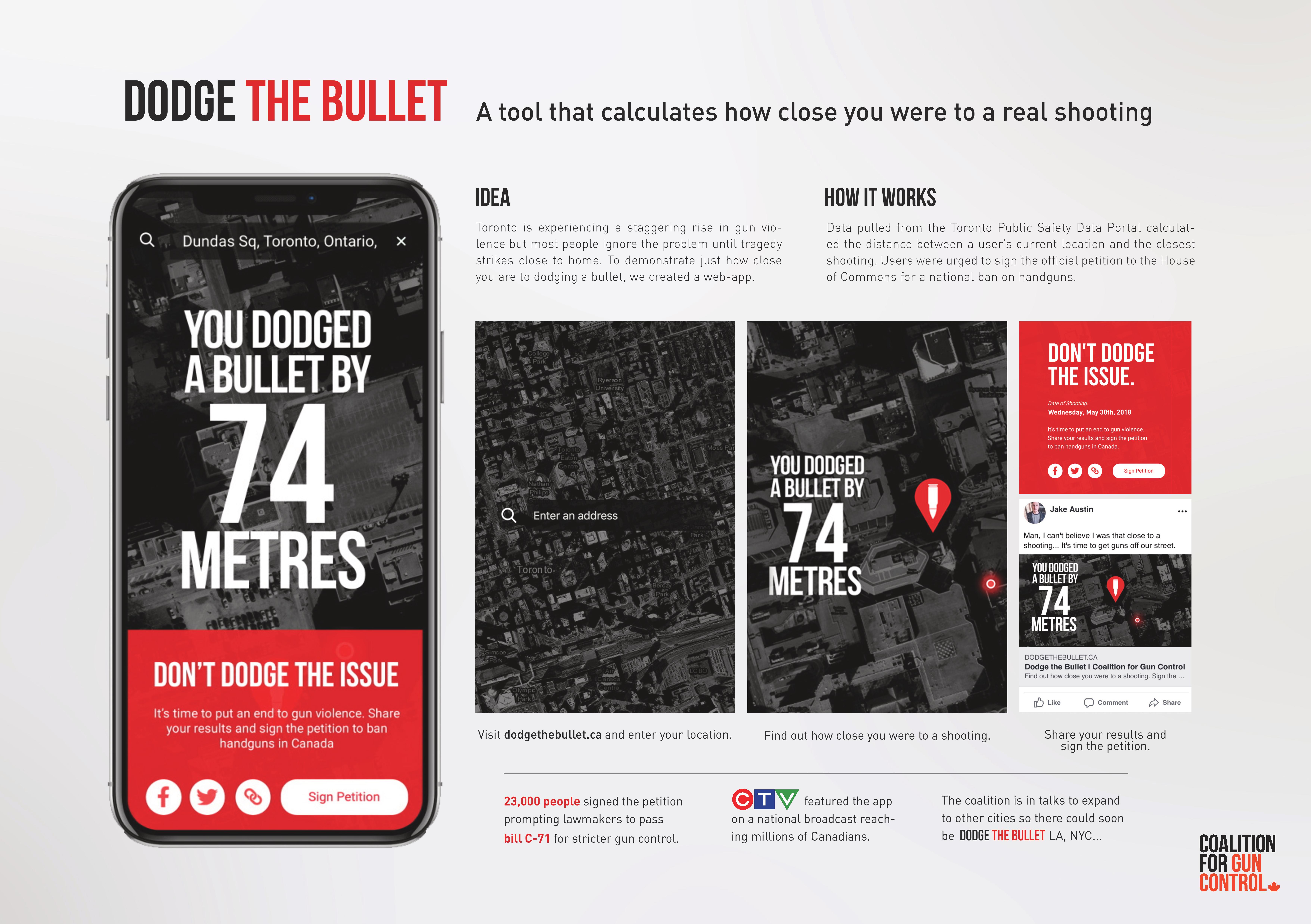 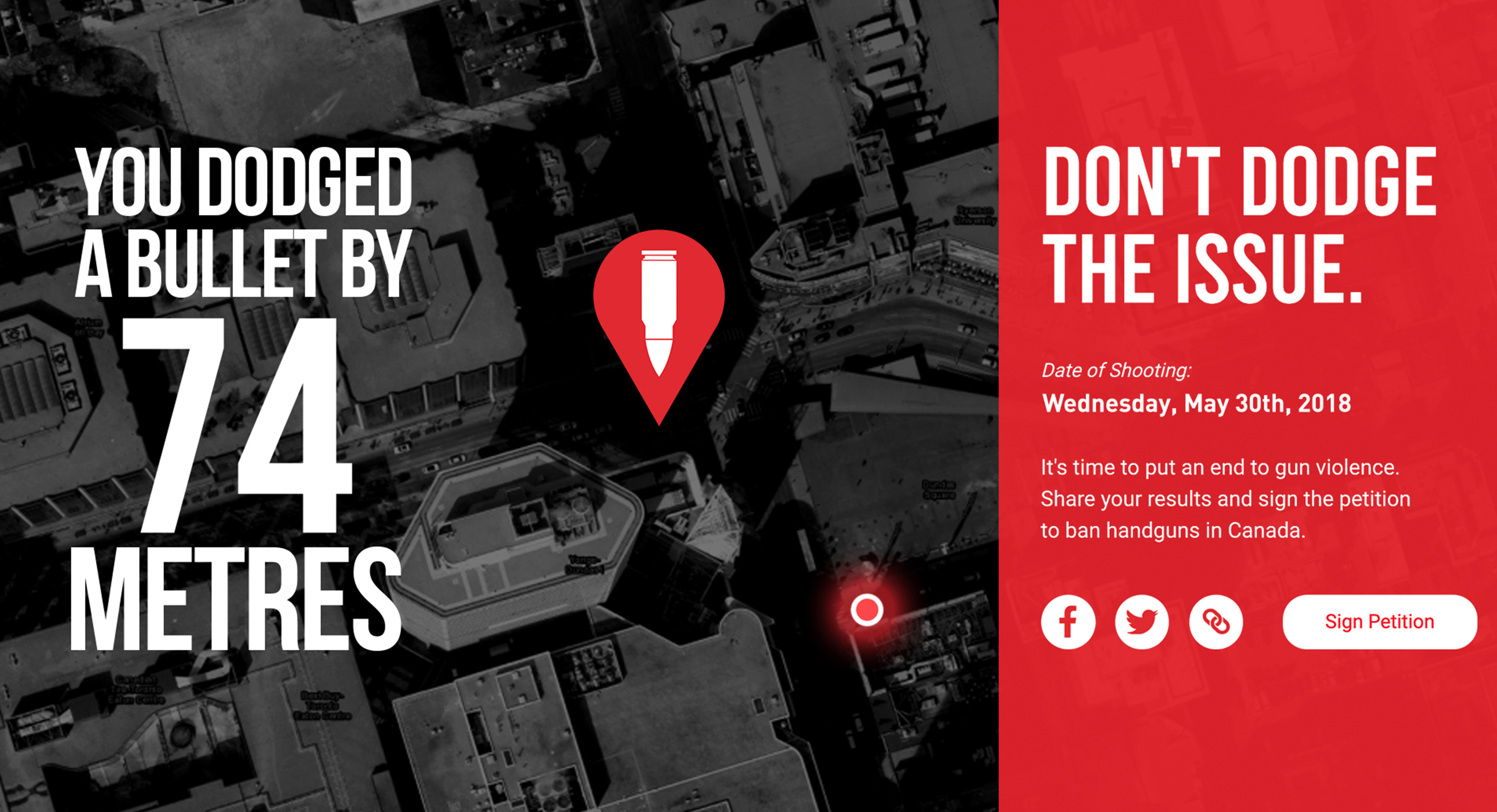