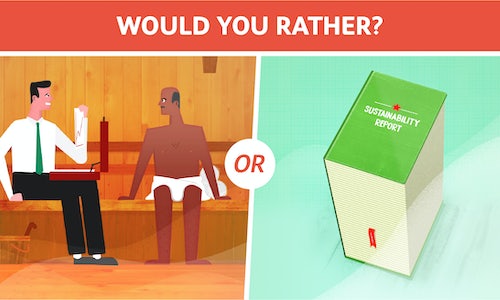 "YOU'RE NOT GONNA READ THIS..." by HEINEKEN USA

Each year, countless companies and organizations release their annual corporate responsibility reports. These reports are not just an exercise in transparency for shareholders, they're a company's public testament to sustainability, diversity, employee health and safety, supply chain, and community engagement. They're a one-stop-shop for what matters to an organization, and are used to showcase successes, admit shortcomings, and prescribe a vision for the company's future.

Corporate responsibility reports are important. Unfortunately, they're also very long, dense and technical, limiting their efficacy as a public communication tool. How is your average consumer supposed to genuinely understand a company's impact on the world when they must read 150 pages to get the point?

HEINEKEN USA set out to create a new way for Americans to engage with and understand their 2016 Annual Report – a blend of their annual performance and sustainability reports. HEINEKEN USA's objective was to communicate the company's sustainability performance in an extraordinary way – the HEINEKEN way – authentic, clear, enjoyable and noteworthy.

With this in mind, HEINEKEN USA set out to create a new way for Americans to engage with and understand their 2016 Annual Report – a blend of their annual performance and sustainability reports. HEINEKEN USA's objective was to communicate the company's sustainability performance in an extraordinary way – the HEINEKEN way – authentic, clear, enjoyable and noteworthy.

Using humor and digital savviness, HEINEKEN USA created a social media activation strategy that leveraged GIFs to make their sustainability report relatable and interesting, targeting audiences 21+ who are interested in sustainability or green initiatives. The campaign, called "You're not gonna read this…," leveraged an interactive site and branded Facebook and Instagram pages.

The campaign involved a smart, funny social-savvy digital activation that engaged social media users, leveraging GIFs to educate and raise awareness about HEINEKEN's sustainability and responsibility programs. Through a mix of intriguing/comical choices and fun creative, HEINEKEN USA encouraged users to click through to the "You're not gonna read this…" site.

The report was launched on an interactive website, "You're not gonna read this…," which also served as the hub for the campaign. This is where visitors were presented with 'Would you rather' scenarios in the form of GIFs. Features on the campaign hub page allow visitors to download the sustainability report and visit the campaign's Instagram and Facebook sites.

The "Would you rather?" choices pit hilarious, unlikely situations up against reading the HEINEKEN 2016 Sustainability Report. The choices were positioned in a way that encouraged the reader to pick the humorous option. However, if instead they chose to read the report, they were immediately directed to a PDF version of the report.

As an example of the user experience, one choice read: "Would you rather always have an orange spray tan…or…read the HEINEKEN 2016 Sustainability Report?"

The button for "always have an orange spray tan" read, "At least I'll glow at night." If the user chose this, a text message-like thread would appear that showed multiple messages reading, "Brave. But at least there are better ways to get picked up. That's why in 2016 we gave out over 100,000 safe rides home across the country. Racing legend Sir Jackie Steward put it best: When you Drive, Never Drink. Wanna learn more, or are you too busy posing as a parking cone?" The user was then presented with another option: learn more about responsible drinking efforts, or get another "Would you rather?" option.

The campaign carefully leveraged pop culture and prevalent methods of digital communication to reach key audiences. By using GIFs, an engaging platform that allowed users to generate their own unique experiences, and genuinely funny content, HEINEKEN USA sought to and succeeded in relaying their sustainability report's content to people who otherwise would not have seen it.

A closer look at their results indicated that, while consumers engaged with the GIFs, their sustainability report received 2,232 clicks which resulted in $0.72 cost per true engagement (CPC). CPC is calculated by non-bouncing website visitors plus animation, completions, divided by total spend. Comparatively speaking, HEINEKEN USA's most recent sustainability report campaign is the second-best performing CSR campaign only to the Heineken +Pool in NYC campaign ($0.34 CPC).

The session duration ranged significantly, demonstrating that some people engaged in a very involved way with the content while others inevitably dropped quickly. Session duration for viewers averaged at 0:28 seconds, which is long enough to be served several different choices and view several sustainability facts and accomplishments. The total number of animation 3-second views was as high as 370,861 views, which was long enough to see one key sustainability fact. The content theme that performed best was HEINEKEN USA's Responsible Consumption category, a key priority for the business. 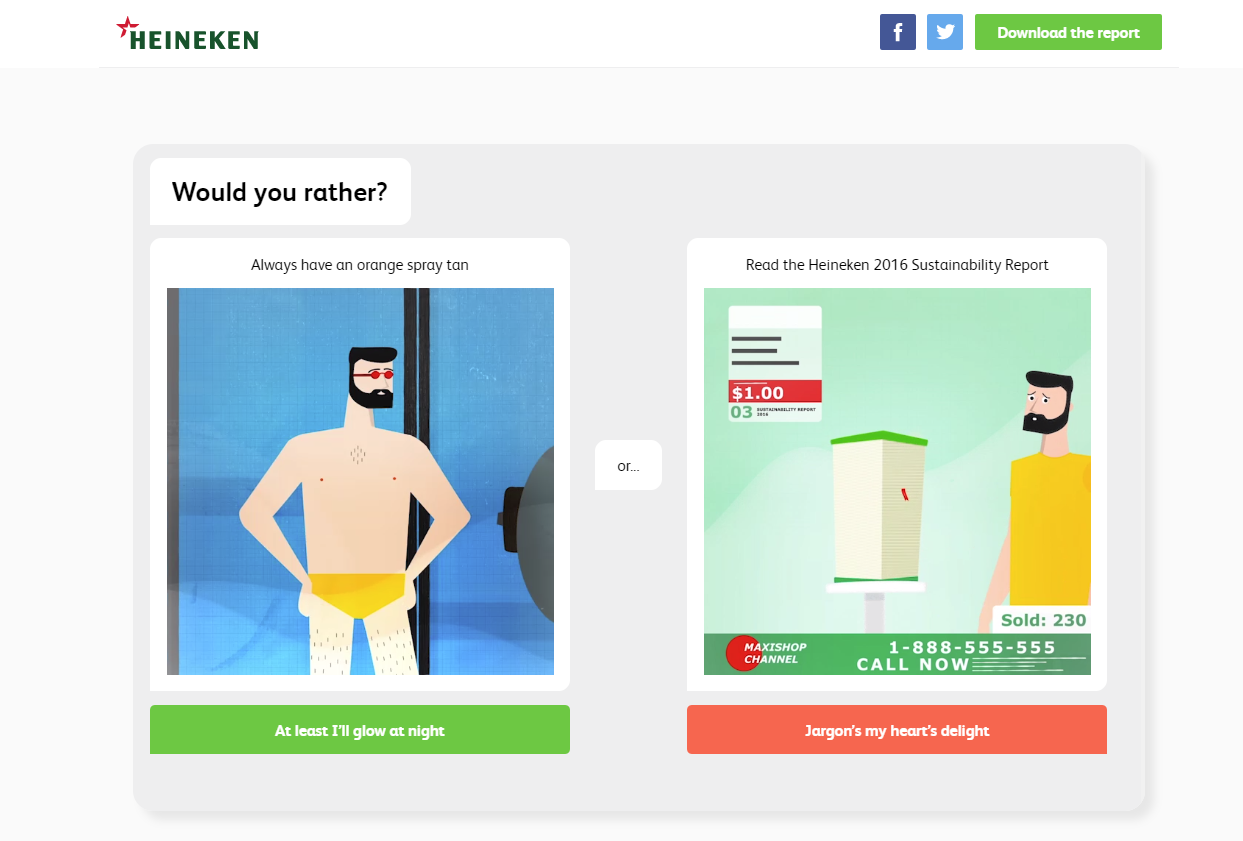 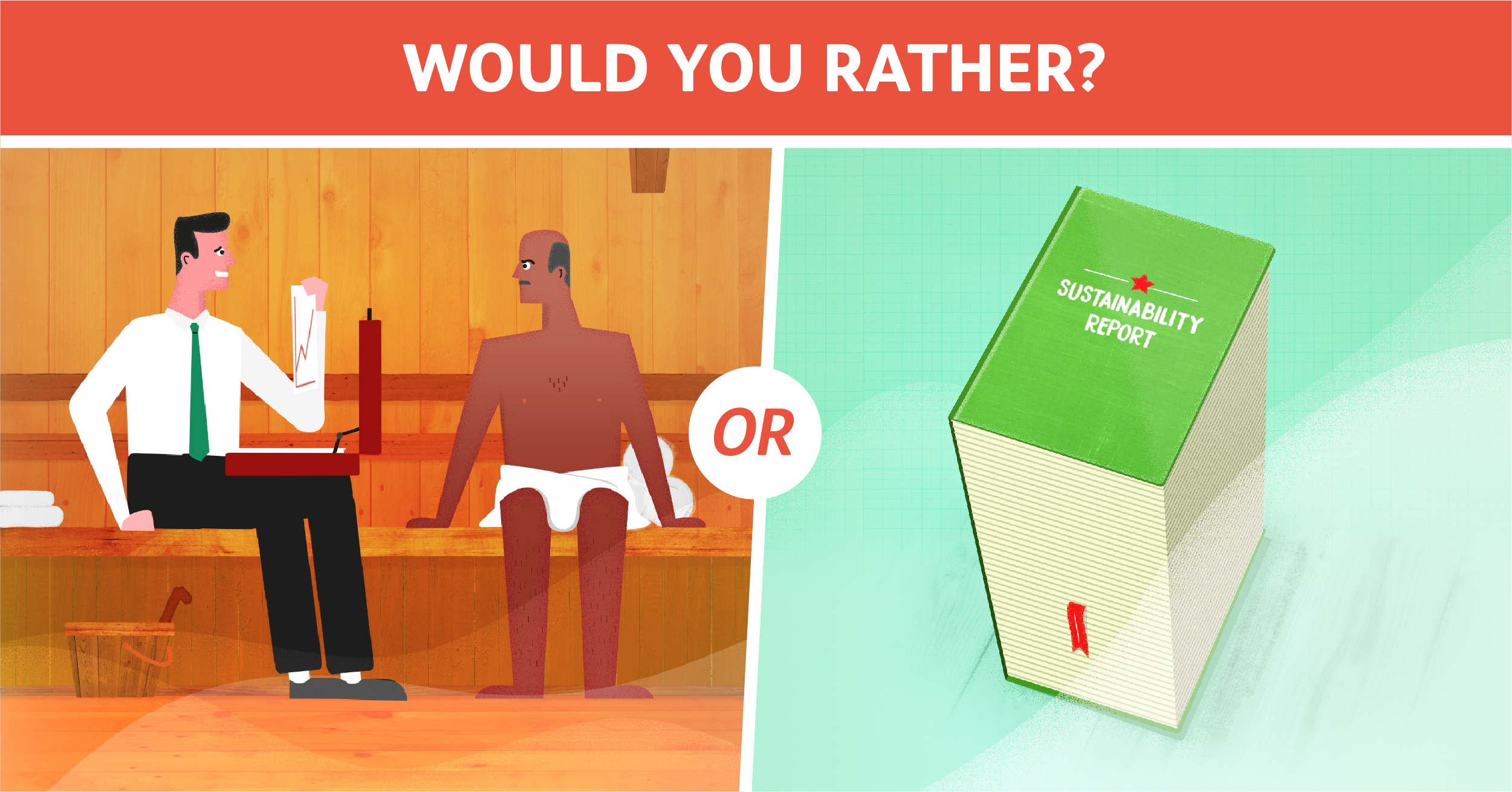 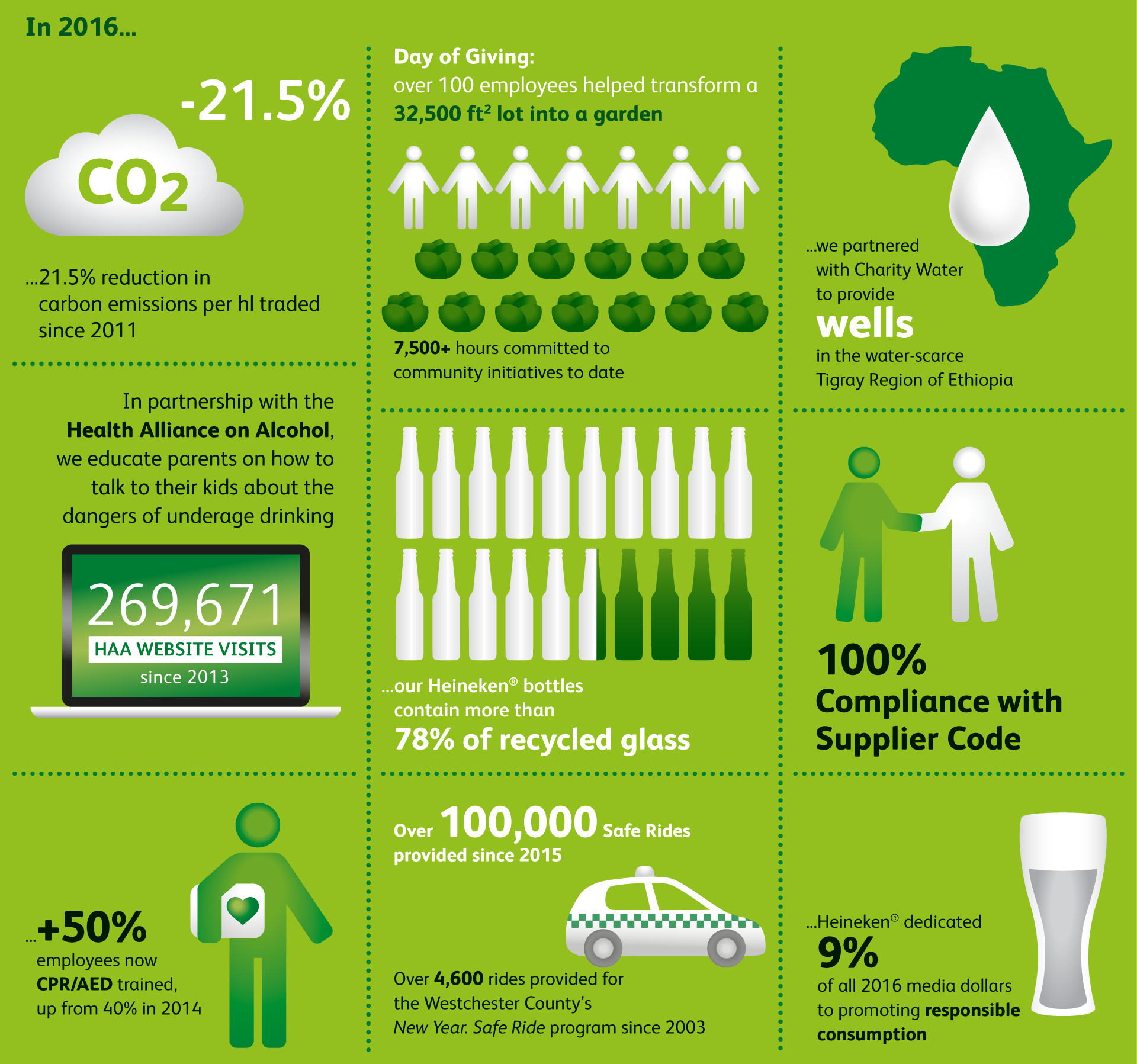 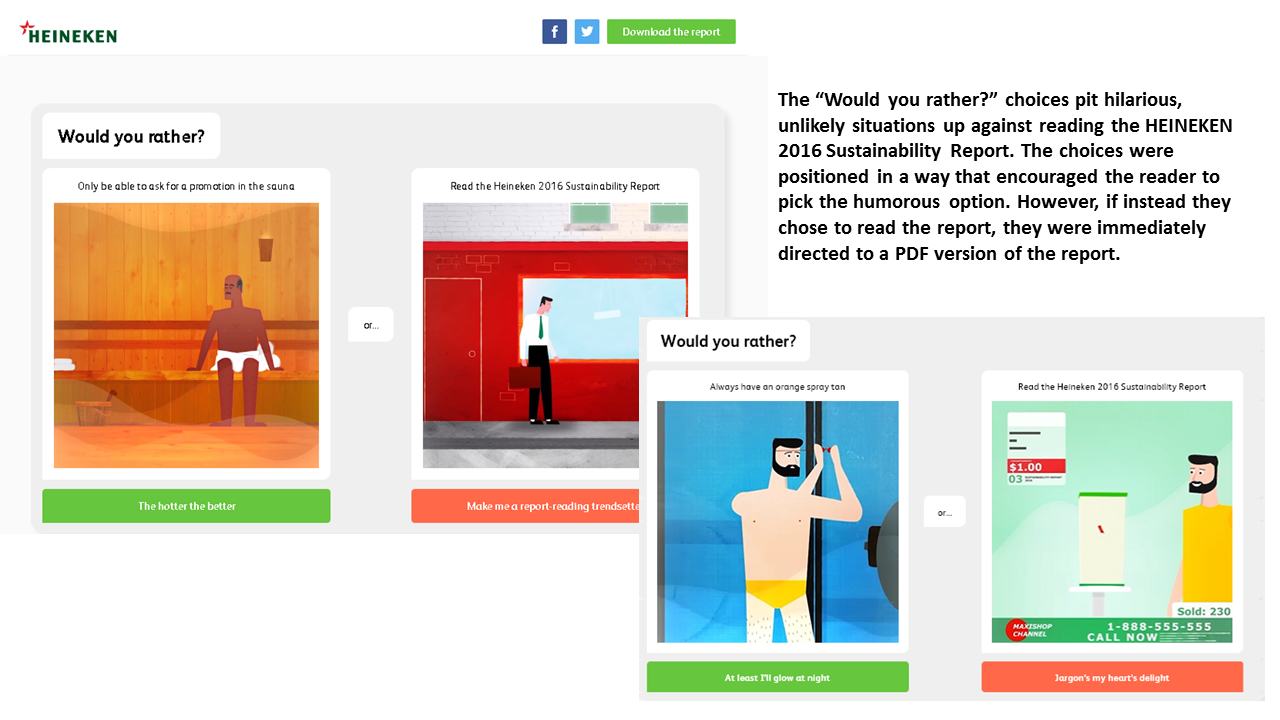 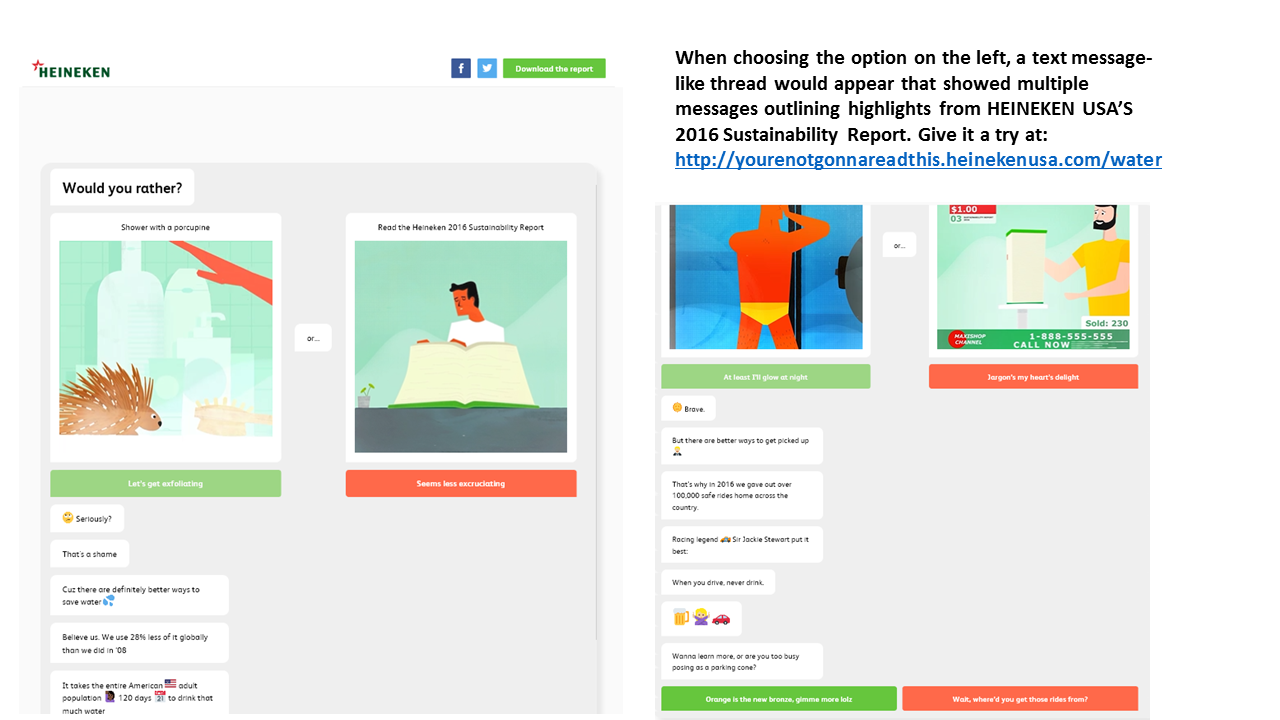