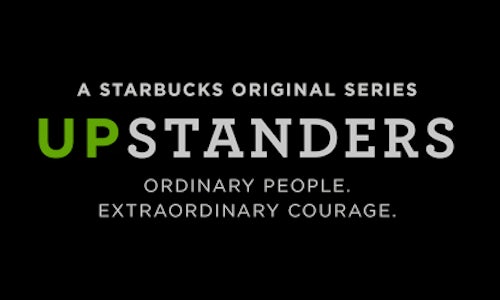 Upworthy believes in the power of a well-told story to change minds and change the world. Not only have we pioneered social-purpose media, but we've been able to use our ability to tell powerful, empathetic stories, combined with a data-driven approach, to build the largest concentrated audience of educated, affluent millennials who give a damn. We know the difference between videos that gets 10,000 views and 10 million — and the difference between getting lost in the noise and getting people to react and engage.

In an era of unprecedented political division, Upworthy has become an expert in amplifying bold actions for tolerance, understanding, and love made by everyday citizens. That's why Starbucks kicked off its Upstanders campaign with Upworthy as its exclusive launch partner in 2016 and worked with us again in 2017; they knew we could deliver the kind of impact their important work deserved. And as the preeminent media partner in helping brands communicate with values-driven millennial consumers, Upworthy was the premier choice in optimizing the content for Facebook so it would be seen by millions of people in today's social-first media environment.

The 11-part series, which focused on inspiring stories of ordinary people making extraordinary changes in their communities, had one simple goal: elevate the national conversation about sensitive topics like the opioid crisis, race, refugees in America, and poverty, to shine a light on the bigger American story, where ordinary people put aside differences to come together. And it was up to Upworthy to deliver.

Starbucks has long taken pride in their role as a good corporate citizen. Rather than producing videos that talked about espressos and lattes, the company created the Upstanders campaign to highlight everyday people who exemplify their core values. A woman who formed a lifelong friendship with the teenager who shot her after he called to apologize. The community organizer who opened a center for gay teens in conservative Utah. And the former Navy SEAL who started a nonprofit to help vets find healing through surfing. These are the people and stories that embody the core values that Starbucks and Upworthy live by every day.

Starbucks' original Upstanders content was compelling, but it was presented in a traditional documentary format — not conducive to an environment like Facebook, where videos only have three seconds to grab a person's attention and prove to them it's worth their time to watch and engage. Through Upworthy's experience combining powerful storytelling and data, we've become experts in producing content that not only is seen millions of times but also leaves a lasting, meaningful impression on its audience. We have become the masters of optimization.

For the campaign, Starbucks identified compelling people to profile, and Upworthy turned these good stories into great videos millions of people would watch. We reworked each narrative frame and structure, using a data-driven proprietary testing and analysis method to take Starbucks' content and optimize it for maximum social performance. We re-edited the videos, tested, and edited again based on real audience performance. Then we natively uploaded each video to Facebook, accessing our audience of 11 million on the platform directly and complementing each with corresponding articles on a dedicated landing page just for Starbucks. Those posts were tested and optimized too and then pushed out to the world.

At its core, the Upstanders campaign is built around a fundamental shift in the way consumers are interacting with brands. More than ever before, brands are being asked not only to offer compelling products, like great coffee, but also to get off the sidelines and show consumers what they value. The Upstanders campaign did just that.

Working together, Starbucks and Upworthy turned compelling stories into true viral successes. While most branded content won't reach millions of viewers organically, Starbucks found that the re-edit and optimization videos resulted in a 98% lift in brand association and 121% lift in brand recall. The campaign saw a total of 26,094,581 video views and 500K pageviews; 4.7x better than Upworthy's standard editorial and 7.8x better than our average for sponsored video. In fact, the top performing article has been trending on our site for almost a month, with the video generating 13.7 million views on its own — a major feat for branded content. The video was even featured on BrandTale as the Best Branded Video of the Week. And not only did Starbucks and Upworthy attract a massive audience through the videos, they did so while amplifying the national conversation around important topics in a way that brought people together, instead of driving them further apart, with the campaign generating more than 777K comments, reactions, and shares on social media.

Video for The Upstanders Campaign