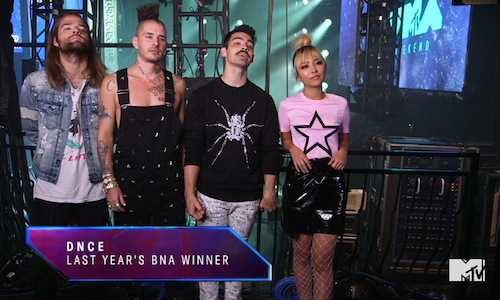 MTV'S Video Music Awards are consistently one of the biggest nights of pop-culture and music with Taco Bell as a longstanding, presenting partner of the Best New Artist Award category that includes multiplatform voting promotion and a pre-VMA concert event. Building upon our six-year partnership success, our objective was to champion Taco Bell's ownership of this category by strengthening and solidifying their continued support of emerging artists.

Each year all eyes are on the Best New Artist category. The category serves as a credible platform that not only supports artists, but keeps our fans on the pulse of emerging music. The Best New Artist award is coveted among artists as past winners remain on the Billboard Hot 100 list 18x longer than before winning. The category and exposure of the Video Music Awards and Taco Bell's support is key to skyrocketing emerging artists to success.

This year we created a mutli-platform strategy, showcasing Taco Bell's continued support of both the Video Music Awards and emerging artist initiatives on MTV. The strategy included multi-platform voting capabilities as well as a pre-VMA concert. With a focus on representing the impact of Taco Bell's support of emerging artists, we looked to highlight a through line of their year-over-year partnership by tapping 2016 winner, DNCE. Together, Taco Bell and MTV created a bridge strategy highlighting DNCE's evolution from winning the award in 2016 to becoming a 2017 VMA coveted main-show performer and all successes in between.

As the key component to our overall campaign, we tapped DNCE to headline VMA Weekend's Best New Artist Night presented by Taco Bell. The concert line-up also included Noah Cyrus – one of this year's 2017 Best New Artist nominees – plus the inclusion of two Taco Bell Feed the Beat artists, Sammi Sanchez and Bebe Rexha. The line-up created a synergy between the VMAs and Taco Bell as Feed the Beat is their own emerging artist platform. Additionally, Taco Bell branding was integrated throughout the night as fans interacted with Taco Bell products and giveaways. This concert served as the perfect platform to capture content and showcase Taco Bell's true ownership of the Best New Artist category and their support of emerging artists through the eyes of DNCE.

Tapping into the concert and DNCE's Best New Artist legacy, the custom promo featured clips of DNCE's performance at the concert as well as showcased the band's progress. DNCE discussed winning the award last year and their excitement about performing at the pre-concert event and main show this year, all thanks to Taco Bell's support of emerging artists. True to Best New Artist and echoing Taco Bell's messaging, DNCE celebrated emerging artists by giving advice to their fellow musicians. Due to Taco Bell and MTV's support, DNCE and future Best New Artists were given a platform to reach for the stars or maybe, the VMA stage!

For maximum impact, we strategically aired the cobranded :30 spot during the live show, continuing the DNCE Best New Artist storyline into the main show with an extended :60 version housed on mtv.com. An Ad Effectiveness & Sponsorship Integration Study* found that 67% of the participants surveyed were aware of DNCE's win from 2016 and most viewers recognized Taco Bell's continued support of new artists. The study also showed that 81% recalled seeing the DNCE promo and 78% enjoyed watching this promo. The study also showed that 80% believe that Taco Bell sponsoring the VMAs and Best New Artist for multiple years helps them stand out from other sponsors, 78% think more highly of Taco Bell for their ongoing support of emerging artists, and 77% appreciate Taco Bell for sponsoring content that helps them discover new music.

By exhibiting DNCE's journey from winning the award in 2016 to performing at the pre-concert event and 2017 awards show, MTV created a custom cobranded spot that reinforced Taco Bell's continued commitment to artist discovery, influenced our viewers to think more highly of Taco bell, and helped Taco Bell stand out from other sponsors. 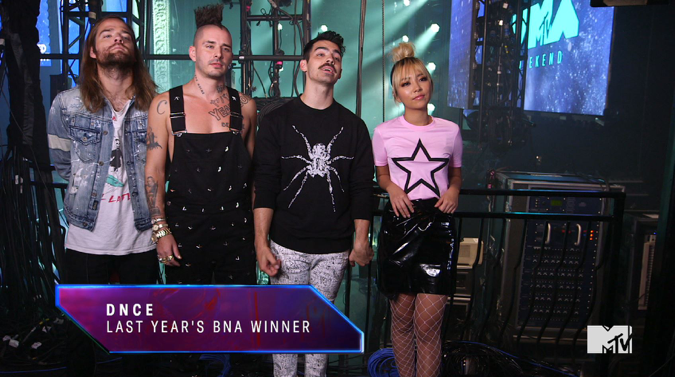