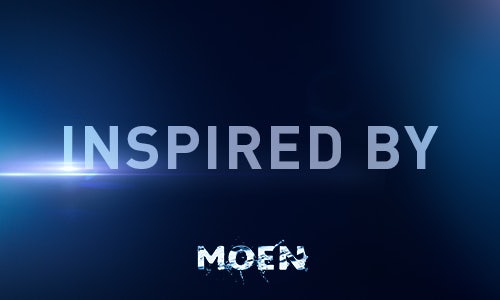 Innovation is in Moen's blood. It's been true since 1937, when their founder, Al Moen, invented the single-handle faucet (and effectively, warm water). It's still true today –it's imperative when more than 1.53 trillion gallons of water flow through your product every year. Our goal was to make today's consumer familiar with Moen's role in revolutionizing the way water is delivered into the home. To reach them at each touch point of the consumer journey, and achieve brand differentiation in a category like plumbing, where everyone looks and acts the same.

As part of an integrated campaign, "Inspired By", Moen put their innovations front and center in order to reclaim the mantle as a leader in innovation – and further differentiate themselves in the mind of the consumer.

The Moen social media feed formerly consisted of imagery that formed a "wallpaper" of in-situation product shots. This was also true in context of their competition. So at launch, each touch point transformed into an interactive platform encouraging users to rediscover Moen.

On Instagram, the @Moeninc feed transformed into an innovation gallery – consisting of both curated and original content. The product innovations received a makeover through highly stylized conceptual photography and video. Moen created audience engagement on the channel by encouraging users to submit imagery with the hashtag, #InspiredByYou. This was based on a monthly prompt released via Instagram Stories.

At the peak of the campaign, Moen launched the "Inspired by Adventure" sweepstakes on Instagram. In exchange for following the @moeninc feed, users were submitted for a chance to win a trip to one of three locations inspired by a Moen innovation: observe the Northern Lights at Banff National Park for Magnetix, zip-line excursion in Costa Rica for Power Boost and white water rafting through the Grand Canyon for Power Clean.

Moen continued to push the opportunities for consumers to interact with their innovations across the social landscape by showing up in unexpected places. During the popularity of the Solar Eclipse, Moen joined the conversation by creating a real-time content piece promoting the new Matte Black design innovation – and tapping into a cultural event that resonated with our consumer.

Taking advantage of Pinterest's new-to-market auto play video, Moen optimized the highly arresting imagery of the campaign for the Pinterest feed, with text overlays highlighting each innovation to users we knew were researching and shopping in the category. The result was astounding, with a video completion rate 184% higher than the industry benchmark of 5.8%.

If a user wanted to learn more, they were directed to the "Inspired by Innovation" campaign hub on Moen.com. Here, one could uncover the full story around the inspirations that led to Moen's revolutionary technology – and discover more around the product itself. The campaign hub led more than 54 thousand new users to learn more. For those that did not visit the website, Moen met them with additional opportunities for engagement. They created mini-experiences within Facebook using the Facebook Canvas ad – which saw an average watch time of 20 seconds.

Video for Inspired By 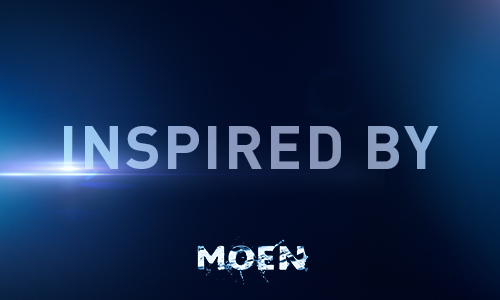