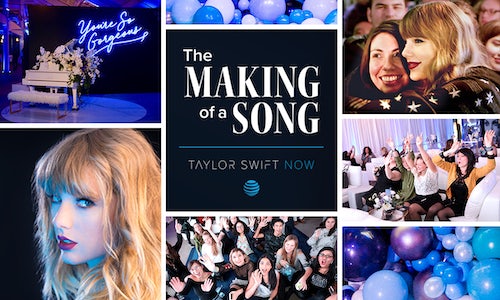 AT&T Presents Taylor Swift NOW: The Making of a Song

Taylor Swift NOW (TSN) is a video catalog on DIRECTV, DIRECTV NOW, and U-verse and is the ultimate video destination for every Taylor Swift fan. The Video On Demand content is organized into themed chapters, and showcases videos, concert performances, behind-the-scenes footage and more from the Taylor Swift archives. It's all hand-curated by Taylor and gives fans a unique glimpse into her career and life.

Our specific business objectives for the partnership include:

AT&T provided Taylor Swift fans a first-ever, intimate look at the creative process behind her latest studio album, reputation, with the release of the revolutionary multi-part series, The Making of a Song. The series was shot by Taylor herself and chronicles her journey through writing and recording songs for reputation.

Prior to launch, we created the visual look and feel of the entire series, drawing elements from the TSN style guide we developed for social media. This included the logo (used across social and OOH), key art, TSN platform art featured on the channel, and intro and end cards for each episode.

We developed a content rollout plan that aligned with the November 10th release of reputation, which kicked off with video teasers from the The Making of a Song, first shared by Taylor herself. In the first week, supporting events in New York City further amplified the launch and that excitement from those moments carried across the country to a follow-up event in Los Angeles.

The week in NYC included a takeover of Times Square with additional OOH, making a huge splash across the city as fan excitement skyrocketed after the long-awaited release of reputation.

AT&T hosted an exclusive invite-only for 200+ fans to celebrate the release of reputation and those in attendance were treated to a special preview of an episode from The Making of a Song. Taylor surprised fans with an appearance at this event, gave a heartfelt speech, and did a meet and greet with fans where they were able to take photos with her. Fans enjoyed photo ops, gourmet food and treats, drinks, and more.

AT&T hosted week-long reputation Pop Ups in NYC and LA in Nov. and Dec. to celebrate the release of Taylor Swift's latest album and the premiere of The Making of a Song series on TSN. Each Pop Up provided fans with the ultimate Swiftie experience that included multiple photo ops with set pieces from her latest music videos ("Look What You Made Me Do" + "...Ready For It?"), the chance to snag exclusive reputation merch, and more. The second Pop Up in LA included all of the photo ops (throne & several outfits from "Look What You Made Me Do") and merch available at the NYC Pop Up plus a few additional props from "...Ready For It?" and an additional gif booth with the bird cage from "Look What You Made Me Do".

To drive sales, both Pop Ups also included a DIRECTV NOW Lounge where there were couches, cookies, and drinks for fans to relax in while surrounded by TVs showcasing the Taylor Swift NOW content. Brand Ambassadors were positioned here to demo the product on iPads and sell subs to prospective customers.

With an episode dropping every Tuesday through November and December, we launched new social content weekly that highlighted new songs and moments featured in the series to drive consistent tune-in and keep fans coming back every week. We supplied additional social creative for Taylor Swift and Taylor Nation, her fan community social accounts, for their own posts to further amplify awareness and tune-in. 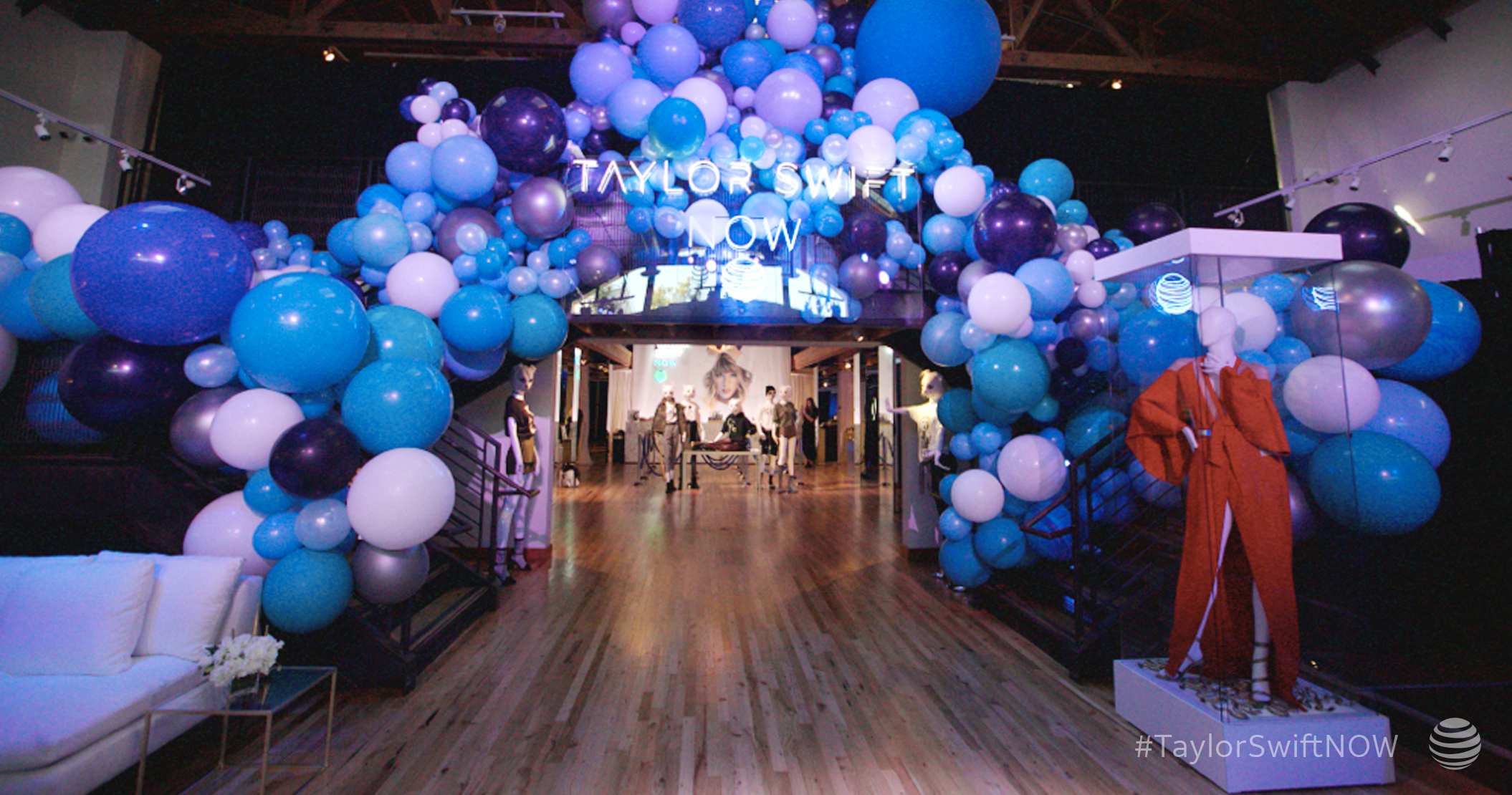 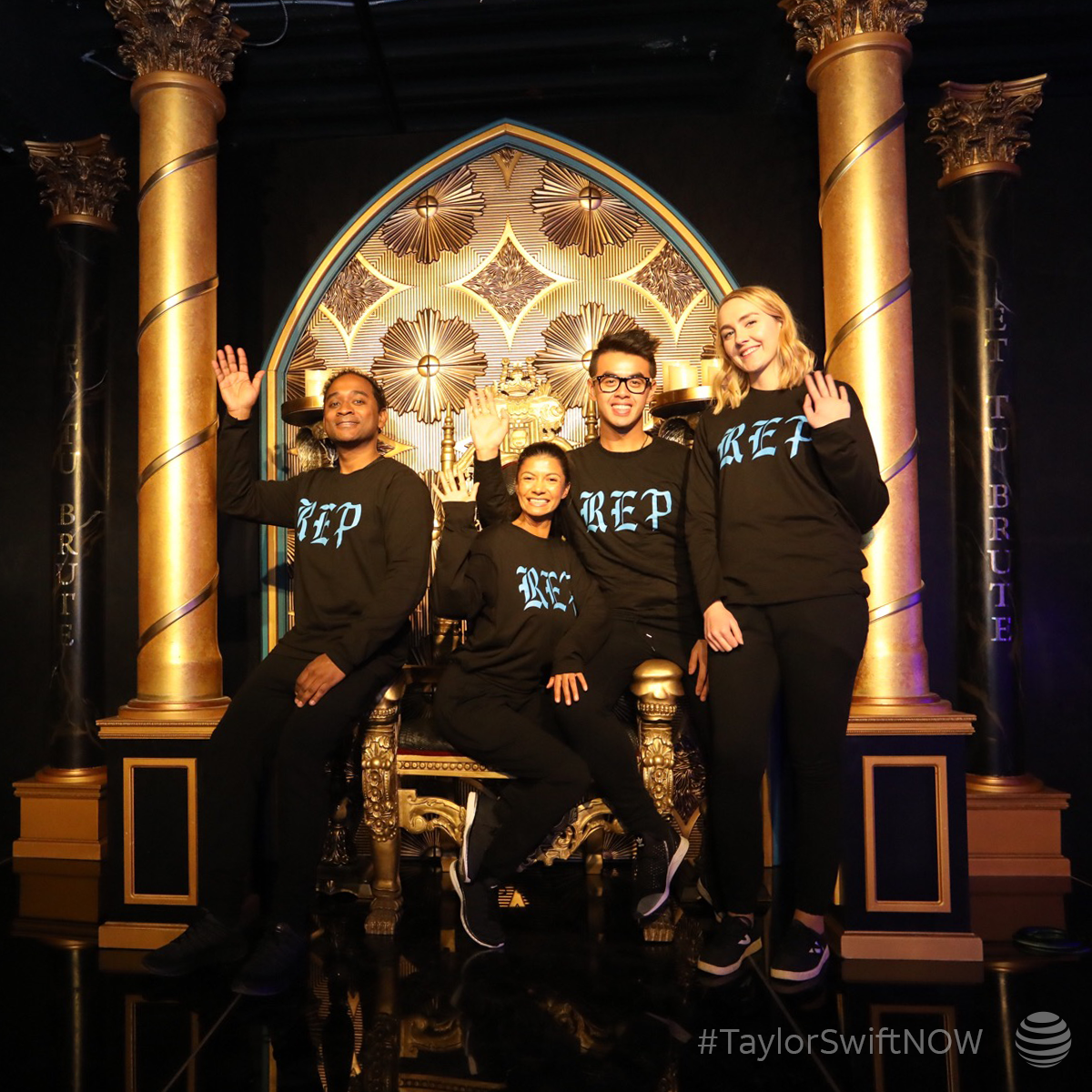 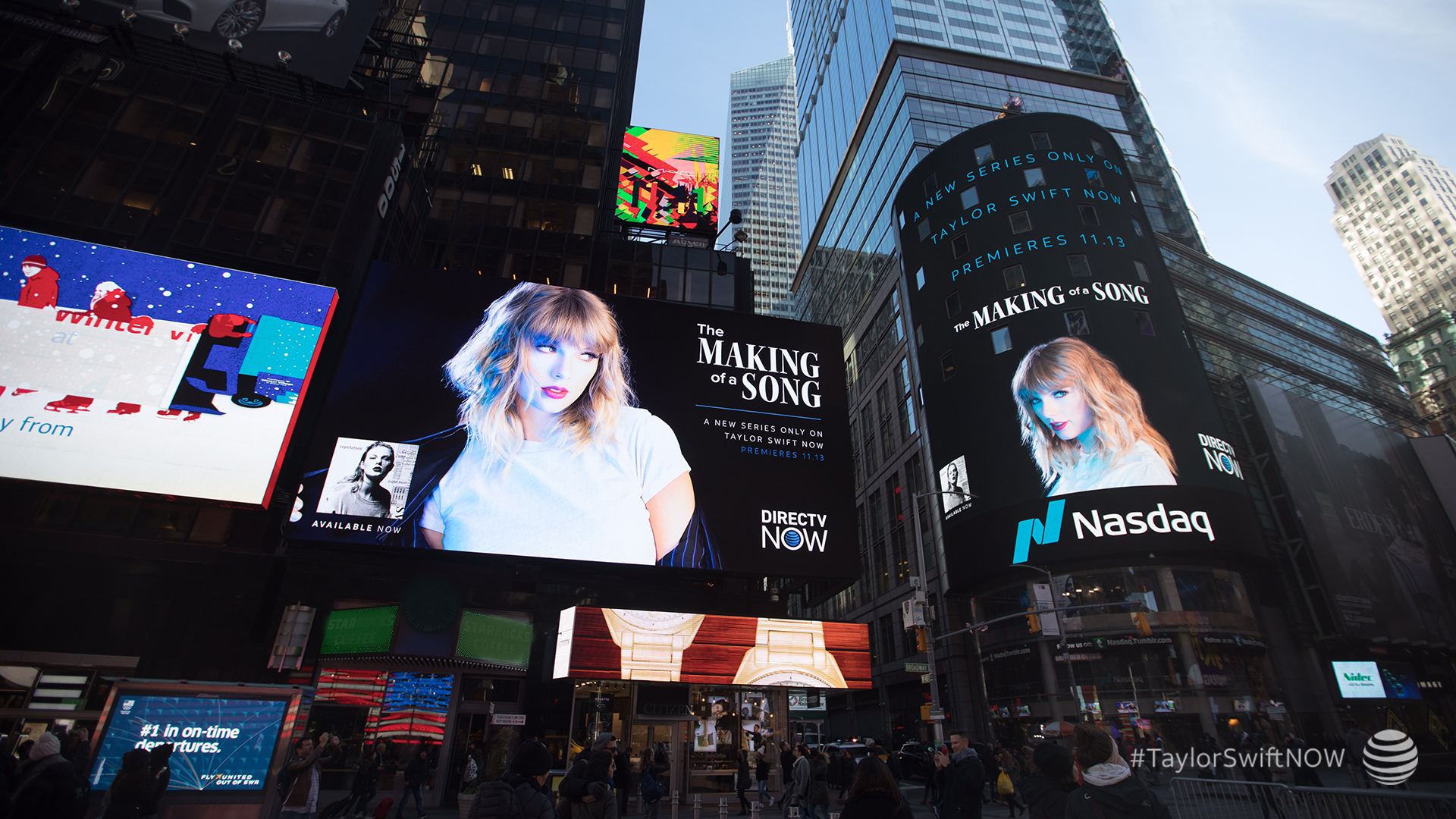 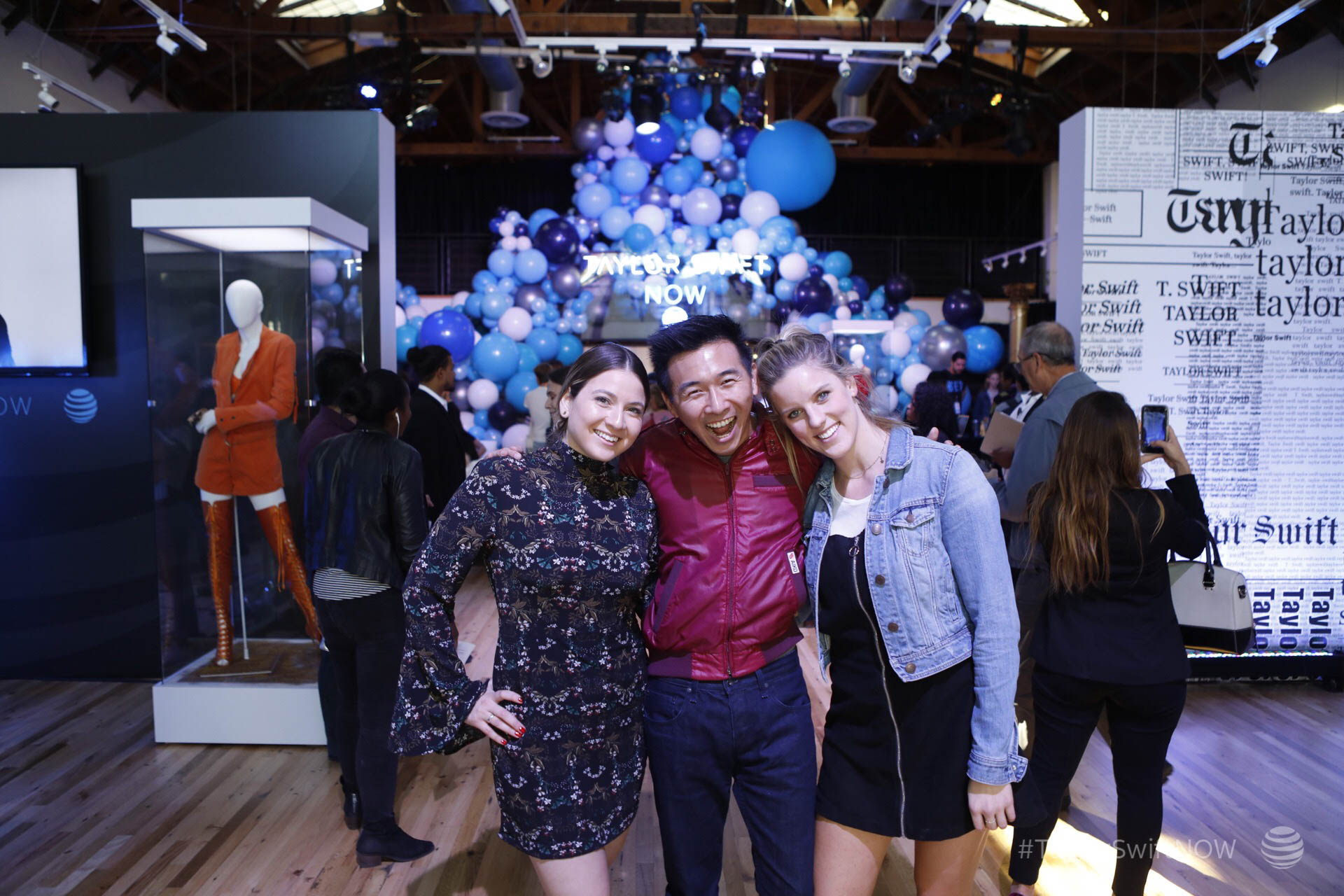 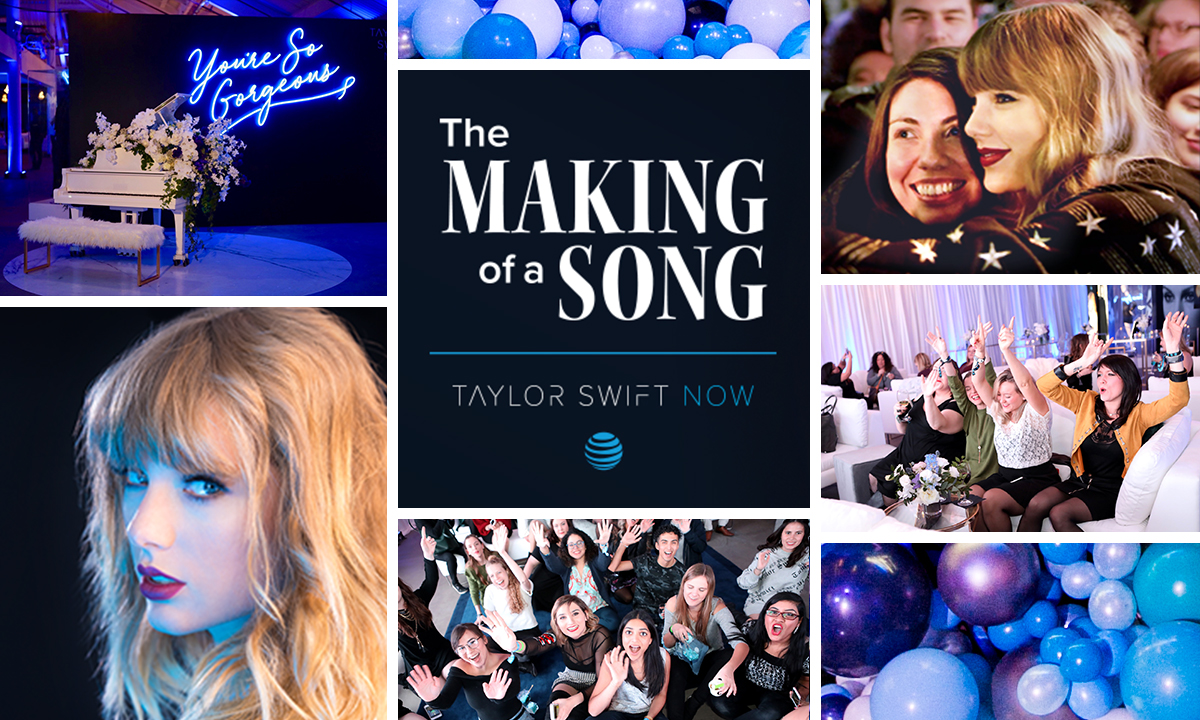