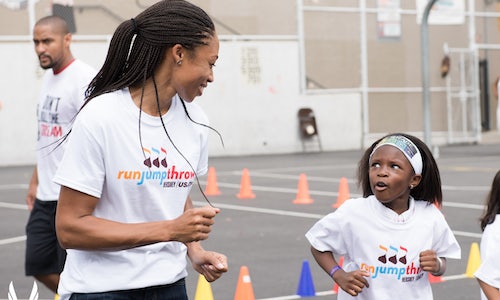 RunJumpThrow is a free, hands-on learning program created by USA Track & Field (USATF) and The Hershey Company. The program was developed to get all kids, ages 7-12, excited about physical activity by introducing them to basic running, jumping and throwing skills through track & field. The program's objective is to offer an opportunity for children to learn new skills, make friends and have a lot of fun running, jumping and throwing with teachers, coaches and parents. With a special focus on reaching under-served children, RJT encourages kids to get excited about track and field, or to apply those skills to other sports.

In 2016, USATF and Hershey incorporated members of U.S. Olympic Team into their programing, fresh off their gold medal performances at the 2016 Summer Olympic Games. In doing so, there was a unique relationship cultivated between America top's track & field talent and the potential runners, jumpers and throwers of the future. Participating athletes included: Allyson Felix, Jenny Simpson, Daliliah Muhammad, Kristi Castlin, Michelle Carter, Jeff Henderson, Will Claye, Arianna Washington and Emma Coburn. With medals in hand, the athletes surprised elementary students by demonstrating activities and encouraging kids while they performed the drills.

In an effort to further reach diverse communities and often under-represented youth, USATF has partnered with the YWCA USA and Sigma Gamma Rho Sorority Inc. YWCA USA, with their stated goals of enhancing the lives of young girls of color. YWCA offers the RJT curriculum to their membership as a way to maintain an active lifestyle. As a historically Black sorority, Sigma Gamma Rho, uses the RJT curriculum as a way to further engage the youth in primarily African American communities.