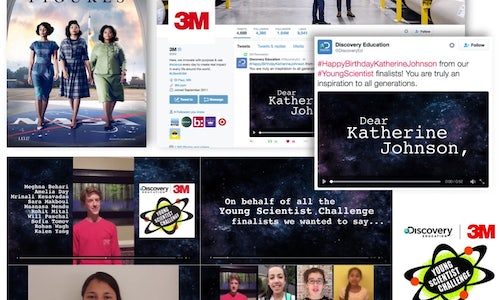 At 3M, we apply science in collaborative ways to improve lives daily. Over the past decade, the company has been a fierce proponent of STEM education through programs that nurture and develop the next generation of scientists. These young scientists will go on to create tomorrow's discoveries that will improve lives.

Each year 3M partners with interactive classroom resource Discovery Education to hold the Discovery Education 3M Young Scientist Challenge (YSC). The competition engages students during a critical juncture in their educational development when many lose interest in STEM subjects. The challenge invites students to create an innovation that solves an everyday problem. And they do! A recent contestant created electricity from water currents. Ten finalists are then mentored by 3M scientists to bring their innovations to life, compete for the title of "America's Top Young Scientist," and win $25,000.

Since STEM education is so important to 3M and our community, we constantly search for opportunities to promote this great cause for future generations. When the trailer was released for the upcoming movie "Hidden Figures" in August 2016, our ears perked up! The film is about a group of African-American female scientists in the racially charged 1960s who had been central to NASA's early Project Mercury and Apollo 11 space endeavours. We knew as the buzz was quickly rising that we had to showcase 3M's commitment to STEM education via the Young Scientist Challenge, but we had to act fast.

We dug in and made our own discovery. One of the three featured women in the story – mathematical supernova Katherine Johnson (played by Taraji P. Henson) – would be turning age 98 in just three days and yet no one was boosting on this rocket amid conversation about the movie. Not even the movie's own promotional machine was talking about Ms. Johnson's birthday just yet.

Just like 3M, Ms. Johnson has also been a powerful advocate for STEM education throughout her life. It was essential that our acknowledgment of her birthday didn't feel forced or branded in order for the video to gain traction.

The nexus of the movie trailer launch and the birthday of one of its living legends offered a rocket-sized opportunity to connect America's future mathematicians, scientists and teachers with Ms. Johnson as "the girl who loved to count."

Working with our long-standing YSC partners at Discovery Education, we reached out to YSC finalists and asked them to quickly videotape a fun and heartfelt message wishing Ms. Johnson a "Happy Birthday" and a short message about the inspiration of her personal story. One student even played the tune "Happy Birthday" on his violin, providing the soundtrack for the video. With limited time, we focused on simplicity of message and production.

Within 24 hours, we received everyone's videos and edited together the final cut that was ready for launch.

On the day of Katherine Johnson's birthday, #HappyBirthdayKatherineJohnson became one of the top trending topics, especially among the NASA/scientific community. When we posted our video on Twitter, we used this trending hashtag to broadly reach STEM influencers who actively follow and participate in the YSC and other STEM education initiatives.

Discovery Education first posted the video on its Twitter and Facebook accounts in the morning, reaching nearly 680K followers and fans — many of whom are STEM teachers and students. 3M's social accounts then shared it to all of their millions of followers. Without any paid promotion, Hidden Figures' social channels and one of the film's stars, Octavia Spencer, also picked up on our tweet and reposted the video greeting as they recognized Ms. Johnson's birthday too.

The campaign achieved more than 162 engagements, 40.5K impressions and a potential reach of nearly 2.2 million on Twitter.

The video received noteworthy retweets by:

Since Ms. Johnson's birthday, Hidden Figures has gone on to become one of the most successful films of the past year. Not only did the film bring Ms. Johnson's amazing "hidden" story to life, but it has since made over $120 million at the box office, won the top prize of Outstanding Performance by a Cast in a Motion Picture at the Screen Actors Guild Awards, and received three Academy Award nominations, including Best Motion Picture of the Year. An incredible achievement not just for the film, but also for the STEM community.

As for Ms. Johnson's reaction? At 98, she can be forgiven for not following all the social traffic, but we're sure she got the message that generations of students are tuned in to her remarkable story as a STEM trailblazer.

We salute you, Ms. Johnson. Thanks for all the trails that you have blazed for generations to come. Happy Birthday! 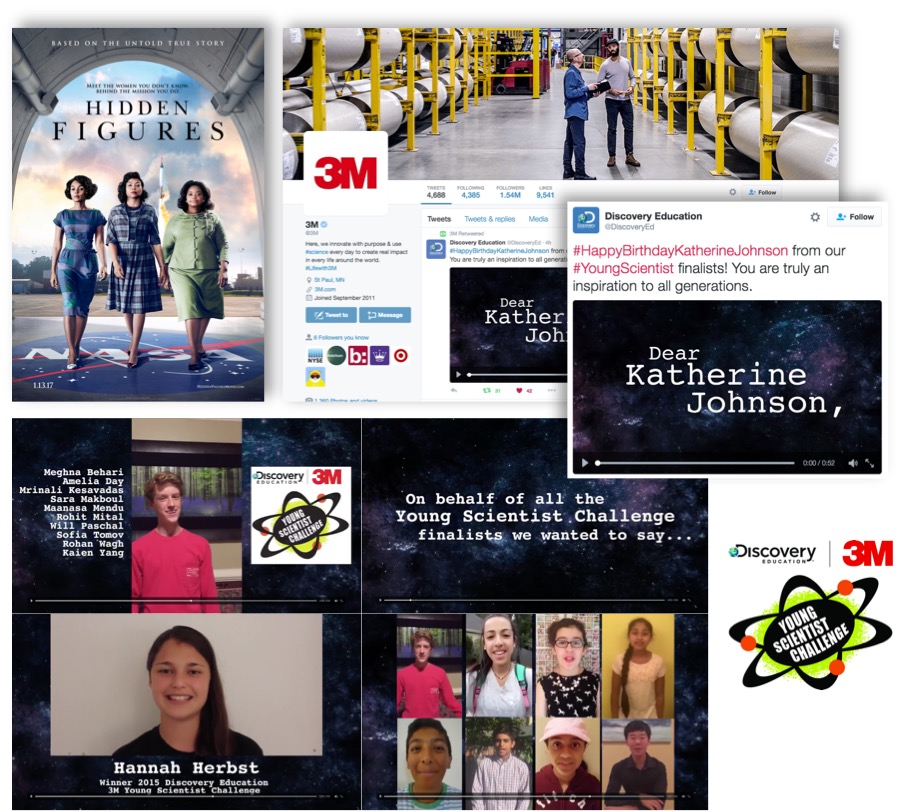