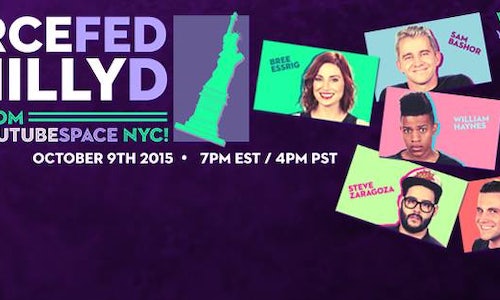 SourceFed Live was a first of its kind - an online late night variety live show that broadcasted from the Los Angeles and New York YouTube Space. Our primary objective was to engage super fans watching on YouTube and in a studio audience. Essentially #SourceFedLive is a custom variety show with segments including: musical performances, sketches, pre-recorded shorts, Q&A, live versions of other SourceFed shows, and audience participation.

The team behind SourceFed Live had two main challenges. The first was the physical and technical implementation of a multi part live stream. This included coordination between the YouTube space staff and a handful of producers to seamlessly broadcast a six camera live stream with pre-recorded videos mixed in. In addition, the social team used influencer marketing to promote both the live stream and an in studio audience opportunity for fans. This influencer strategy included custom in-video promos, a ticket contest and fan interaction through Twitter, Snapchat and Facebook.