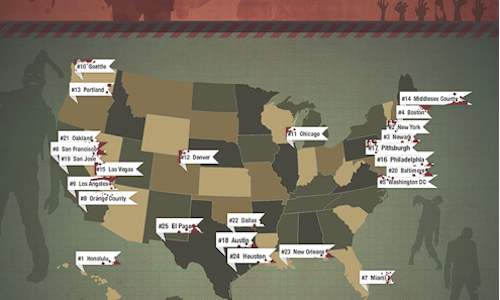 Trulia’s 25 Most Appetizing Cities for Zombies

Real estate is a highly seasonal business, and as a result sites like Trulia, Zillow and Redfin are constantly jockeying to "own" various holidays in order to be top of mind with home shoppers. Zillow has typically owned the period surrounding Halloween due to its successful annual ranking of the best cities for trick or treaters. In October 2013, for instance, Zillow achieved a whopping 75% share of voice, compared to 17% for Trulia. Heading into October 2014, Trulia was determined to prevent a similar result.

Following the record-breaking premiere of AMC's The Walking Dead, Trulia leveraged local maps data and supplementary third-party congestion data to identify the Top 25 Most Appetizing Cities for Zombies based on hospital density (easy access to food), congestion (food with no place to go), hardware stores (defenseless food) and Walk Score (overall walker-friendliness). The graphic and associated data was pitched to a wide variety of media & influencer verticals spanning general news, entertainment and lifestyle and was posted to Trulia's social media and blog channels.

With the introduction of entertainment hits like The Walking Dead and World War Z, America's interest in zombie culture has soared over the past few years. Trulia joined this highly topical conversation in a compelling way that was not only ownable to the brand (leveraging data directly from their site with supplementary third-party reports), but also took on a different perspective – that of an actual zombie vs. humans. The content was highly relevant, easily sharable and rooted in Trulia data to generate widespread media coverage and awareness for the brand. 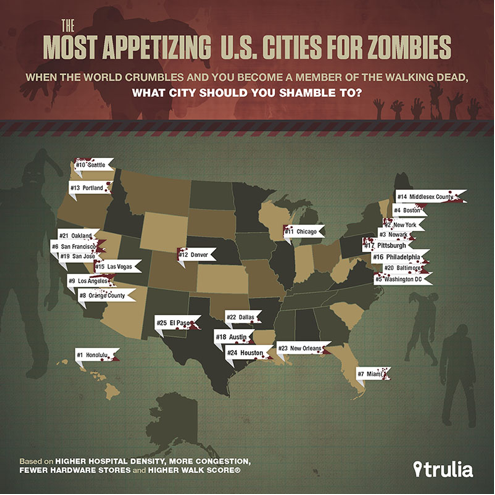