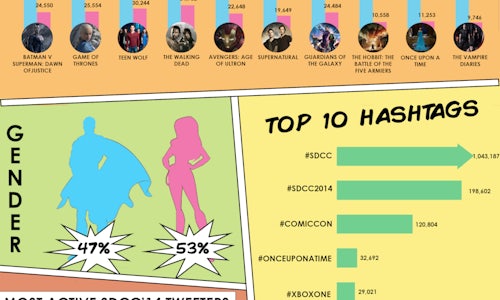 We monitored the biggest Film and TV fan convention in Hollywood.

Using Global English social buzz data, we recorded the number of mentions each title received at SDCC2014 and reported which titles stole the headlines at the show.

Our aim was simple; tell the world what film fans were really talking about at San Diego Comic Con.

Monitoring Twitter, News sources, blogs and forums, we analysed the social conversation for the events occurring on a day by day basis, before listing the Top 10 drivers across Buzz and Intent-To-View.

We looked at the gender split in conversation, revealing that, thanks to the debut of Wonder Woman; females drove discussion across the convention. We also revealed the top 10 most popular hashtags.

On top of all of this, we broke down mentions of shows and films into a studio Share of Voice chart, revealing that Warner Bros dominated studio conversation.

Throughout SDCC2014 we ran daily updates exclusively on Variety, reporting on some of the biggest news stories in the film and TV industry in the process.

Following the release of our round up piece, we gained global coverage across several markets, including the US, UK, France, Netherlands and Belgium.

Our data was quoted hundreds of times by some of the most influential publications in the entertainment world, such as Variety, Yahoo, Screen Daily and AlloCine, generating tens of thousands of engagements and stirring up heated debates amongst film fans globally.

Through this infographic, we were also able to build global awareness of Way To Blue as an insight- led communications agency.

We took the biggest Film and TV fan convention in Hollywood, millions of social mentions and revealed the story in a clear and simple infographic, letting audiences know the facts without confusing the data