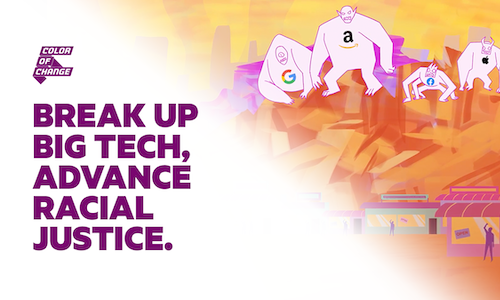 The latest developments around Big Tech and its unfettered influence on our communities nationwide make it clear how urgent it is to pass antitrust reform. Given that fact, Color Of Change’s objective through #BreakUpBigTech is to bring attention to how Big Tech companies use their monopoly power to disproportionately harm Black consumers, workers, and small business owners.

Each business wing of the tech industry -- whether it be in regards to search, apps, ads, ecommerce -- is monopolized by one or two dominant companies. Monopolies put economic justice at risk, especially for Black and Brown communities who have long dealt with the realities of monopolies and anti-competitive businesses.

Tech firms like Facebook, Google, and Amazon get bigger and bigger every year. They buy smaller businesses and push others out of the market, which can lead to fewer jobs in our communities. Monopoly power is why we still see misinformation and voter suppression messages on platforms like Facebook and YouTube, and in January 2021, we saw how quickly online speech turned into an attempted white nationalist coup. Through the #BreakUpBigTech campaign, Color Of Change aims to bring awareness to these issues, and underscore that without government reform or competition, we’ll continue to see white nationalist violence organized on these platforms.

A primary goal of this campaign focuses on urging Congress to vote for the historic antitrust package that signals the first steps to rein in Big Tech bills and for President Biden to sign them into law.

As the nation’s largest online racial justice organization, Color Of Change consistently champions the rights and representation of Black people across the country, using a nuanced, multi-pronged approach that includes tackling an unregulated technology industry, and demanding accountability from corporations.

Using an “inside-outside” strategy — an advocacy tactic where one arm of the organization works directly with institutions and decision-makers while another helps everyday people take action and demand justice, applying external pressure — Color Of Change differentiates itself from other progressive groups. Color Of Change also works to get a seat at the table, meaning that running parallel to the external campaigns are internal conversations with the industry decision-makers, elected officials, and policymakers across the board.

This strategy has been showcased throughout its #BreakUpBigTech campaign where COC has led the charge against Big Tech's by advocating for antitrust policies to advance racial justice through its codification. An example of this includes the launch of COC’s Black Tech Agenda, which sets an affirmative vision for how to create tech policy with a racial justice framework. Endorsed and cosigned by Sen. Cory Booker, Sen. Elizabeth Warren, Rep. Robin Kelly, and Rep. Pramila Jayapal, the agenda is designed to help distinguish between real solutions that will advance racial equity and fake solutions proposed by Big Tech.

Additionally, through strategic partnerships like COC’s collaboration with the Aspen Institute, the organization has been able to successfully roadmap progress towards racial equity in the tech industry. In addition to these efforts, COC has worked to increase transparency and understanding throughout these institutions whilst rebuilding trust amongst the people who utilize these platforms in their day to day lives, as evidenced through the organization’s progress with companies like Airbnb, Facebook, Google, and more. COC President Rashad Robinson has also testified for a congressional hearing on "Holding Big Tech Accountable: Targeted Reforms to Tech's Legal Immunity," where he warned of Big Tech's adverse effects on lives and the negative effects of misinformation being spread.

Color Of Change leveraged their seven-million members by calling on them to sign and support a petition that called on Congress to pass antitrust bills and President Biden sign them into law. Color Of Change also leveraged their social media platforms, which consists of over 1M followers, by bringing attention to the petition and narrating how big tech companies will continue to erode the Black community's economic gains if these bills are not passed. Over the course of the campaign, Color Of Change utilized the media to bring attention to this issue by landing placements in Tech Policy Press, Protocol and The Plug, amplifying the harmful consequences Black communities will face if the bills are not passed.

Leveraging its seven-million member base, the organization has successfully pushed for holistic industry reform in the halls of corporations and government alike.

As part of the organization’s #BreakUpBigTech campaign, Color Of Change rallied Congressional leadership in the House of Representatives to bring the antitrust bills to the floor for votes and to treat antitrust reform and tech regulation legislation as core racial justice issues.

COC also successfully pushed Twitter and Facebook to de-platform former President Donald Trump for his repeated efforts to spread election misinformation, and its harm to marginalized communities and the health of our democracy.

In the past year, Color of Change has also partnered with Aspen Institute's Commission on Information Disorder to help government, private industry, and civil society address and reduce the ongoing disinformation crisis. The collaboration culminated in an in-depth investigation and report to better define the causes and challenges of information disorder and offer a viable framework for action that must be adopted before the 2022 and 2024 elections. The Commission on Information Disorder Final Report effectively offers a roadmap to support those that impose greater accountability on bad actors, check Big Tech’s overreaching influence, and to tackle the looming crisis of information disorder today. 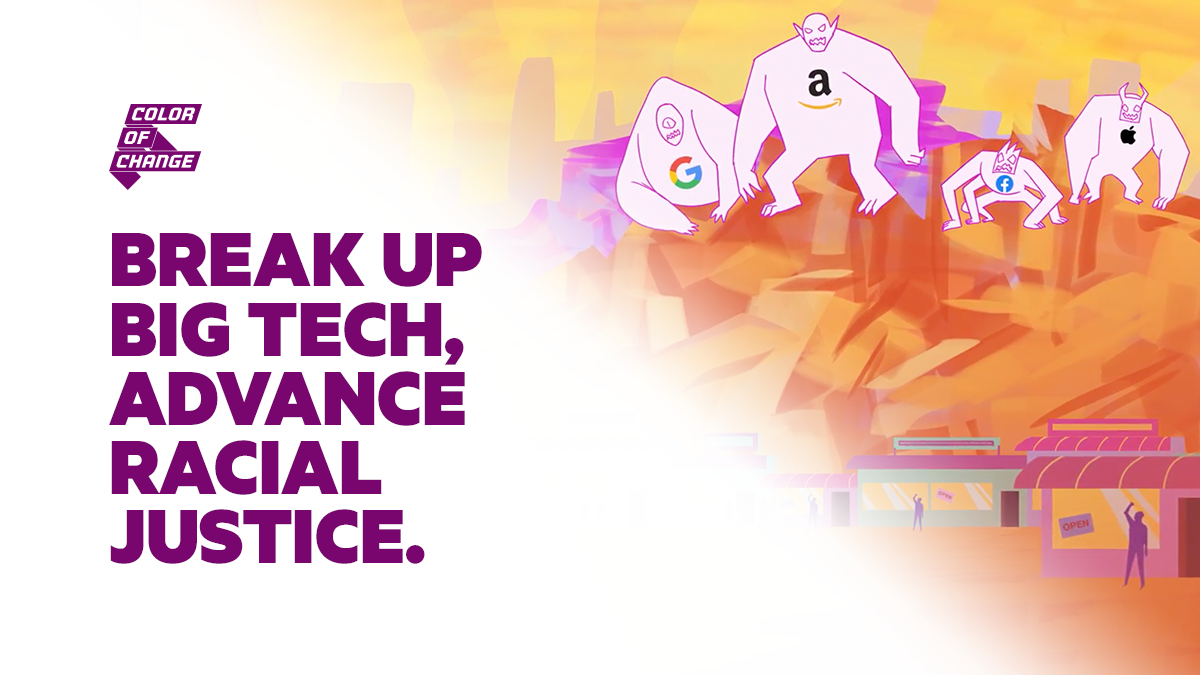 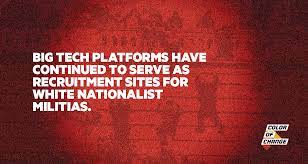