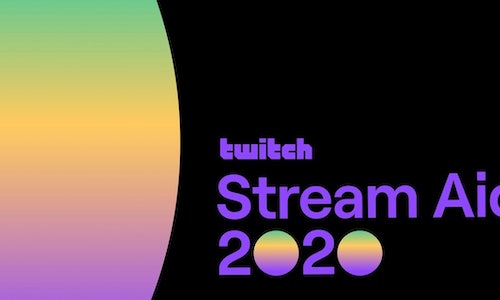 COVID-19 separated us all—from each other, sports, concerts, movie theatres, and what we knew as normal. Twitch was already known as a place that brings people together online, forming communities and interpersonal bonds. Since its inception, Twitch’s live streaming and live chat features have created an interactive, real-time community environment as close as possible to real-life, in-person connections. Acknowledging this, the Twitch team decided to create a fundraising event that would bring feel-good moments for the greater good.

Twitch Stream Aid was born of the desire to raise money for a worthy cause while also bringing entertainment back into people’s lives. The goal was to foster community and spur change, uniting people with the personalities they love —athletes, musicians, actors—all in the name of charity.

The name Twitch Stream Aid itself, a callback to Live Aid, promised community and positive change for all those affected by a global crisis while finding fun and togetherness in the name of providing relief for those on the front lines.

Twitch Stream Aid kicked off on Saturday, March 28, live from Twitch’s own channel, and ran from 9am to 9pm PT. The event combined gaming, musical performances, celebrity appearances, and spotlights of everyday Twitch streamers getting in on the fun.

Additionally, any streamer who used the hashtag #TwitchStreamAid could be found and featured on the broadcast, which was a thrilling opportunity for budding creators everywhere.

Throughout the twelve-hour stream, Twitch ran a donation page for the COVID-19 Solidarity Response Fund for WHO, which was powered by the United Nations Foundation. Any tuned-in streamer could create a “supporting campaign” on this page to drive donations to their own streams and leverage their own followings to garner support.

Additionally, the stream provided a unique opportunity for viewers to chat directly with their favorite celebrities, creating a sense of community unique to Twitch. Charlie Puth became “totally enamored” with Twitch Chat, saying it “brightened his day” to feel fans singing along to his virtual concert.

The event also kicked off a full week of charitable live-streams on Twitch, raising more money for good causes and attracting new viewers and growing the community.

Twitch raised more than $2.77M for the COVID-19 Solidarity Response Fund for WHO, as well as awareness for COVID-19 relief.

Less concretely, Stream Aid introduced to the world an entirely new way to fundraise. Twitch was one of the first to pull together a digital benefit event so quickly after social distancing began, and the only one to feature 12 full hours of dual streaming content with artists for mainstream, as well as a channel devoted completely to gaming.

Twitch Stream Aid was unique to all other benefit events—even those that did include live performances—because it was the only one to provide interaction with fans and their favorite celebrities at a vital time when the world longed for human connection.

So early into the effects of social distancing, Twitch Stream Aid not only raised money to benefit the relief efforts—and supplied creators and viewers with a distraction from quarantine—but it filled a vital need for connection and introduced a whole world of artists, creators, and viewers to the power of live-streaming and the Twitch community.