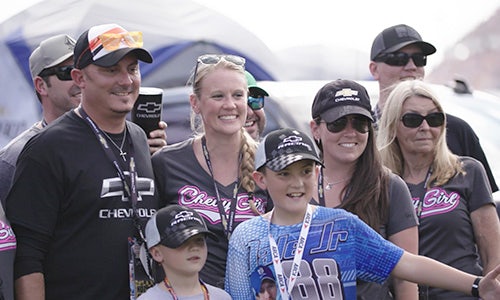 Chevrolet’s role was to work with the American Cancer Society (ACS) to identify a recipient and create a short film of their journey to share as a way to help others struggling with cancer. This film, Hotel Silverado, would recognize a member of the ACS’s “Relay For Life” program in order to spread awareness about the need for cancer patients and their families to build strong support systems.

The short film of the recipient’s journey would be published by the ACS and shared by Chevrolet and their high-visibility partners.

Ultimately, NASCAR fan Joey Miller, an aspiring songwriter, musician and Chevy owner was chosen to be that person. Joey’s story was unique and powerful; he had hoped to go to Nashville and pursue a career there. But he selflessly gave up his dream when his father was diagnosed with leukemia to stay. Joey stayed in Florida to take care of his family in their time of need, including his mother who was herself battling breast cancer. He kept his musical hopes alive by performing locally in the Port Orange, Florida area. Meanwhile, Joey became an avid team captain for A Family Affair at “Relay For Life”, a fundraiser that brings communities together to remember loved ones lost, honor survivors of all cancers and raise money to make a global impact on cancer.

Chevrolet, in partnership with the American Cancer Society, wanted to give a worthy recipient who was a current Chevy owner and their family a once-in-a-lifetime experience: camping trackside at NASCAR’s
world-famous Daytona 500 in a brand, new Chevy Silverado. This would allow the recipient to see the race in as up-close-and-personal a way as possible.

For the big reveal, Joey’s family gathered at a restaurant where he was performing to celebrate the birthday of his late father Steve. This was the perfect opportunity to present the invitation to Joey from Chevrolet to attend the Daytona 500. Joey was only told that a rep from the ACS would be attending the performance to thank him for his efforts on behalf of the Team “A Family Affair” organization.

Prior to Joey’s performance, we interviewed his family and the representative from The ACS who attended in recognition of his father, about his musical career and his work with Team “A Family Affair.” Joey had no idea of what was to come but his excitement grew by the minute when Chevrolet Trucks Director of Marketing Sandor Piszar drove up in a new Silverado and stepped up on stage.

Our crew then captured Joey’s reactions as Sandor told him how his story had inspired everyone at Chevy and he then invited Joey to be Chevy’s VIP guest at the upcoming Daytona 500 race, viewing the race from the infield in a specially tricked out “Hotel Silverado.” We captured additional interview footage with Joey after the invitation that helped elaborate his story and amplify his reaction to the surprise.

On Race Day, crews filmed Joey’s excitement and the joy of the family while experiencing an intimate view of the race.  It was arranged for Joey to meet his favorite NASCAR drivers, Dale Earnhardt Jr., Bubba Wallace and NASCAR legend Richard Petty in the infield, and even take a lap of the track in a new Silverado.

The Hotel Silverado video would go on to receive over 250K views. During the race weekend and into the next week, Chevrolet’s partners: The American Cancer Society, Daytona International Speedway, country music star Luke Bryan and the drivers posted about Joey’s experience 24 times to their social channels. 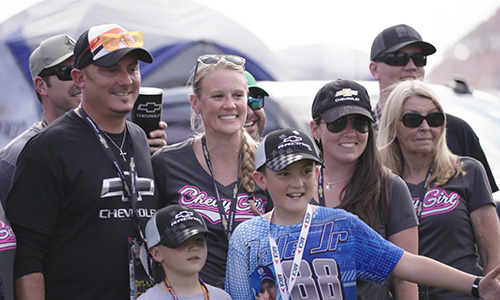