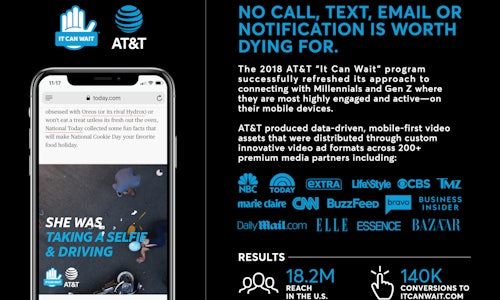 AT&T It Can Wait

In 2010, AT&T launched the “It Can Wait” program, educating distracted drivers that no call, text, email, or notification is worth dying for. Over the years, AT&T has turned ‘It Can Wait’ into a social movement through its award-winning ad campaigns and activations. The campaign to end distracted driving has achieved tremendous success, inspiring over 36 million Americans to take the pledge. But the work is not done.

In 2018, AT&T was looking to reach Gen Z, Millennials and adults 35-54 where they are most highly engaged and active—on their mobile devices to:

Research suggests that marketers must tell a story in 2 seconds and reach the denouement within 4-5, or they risk losing about half their audience. Making an emotional connection with the Millennial and Gen Z audiences on their personal mobile devices demanded more than simply repurposing TV and digital assets and AT&T wasn’t afraid to innovate with a mobile-first approach.

AT&T produced 2 formats of mobile-first video: vertically, how the majority of mobile video is consumed, and in 1:1 aspect ratio, optimized for Instagram. Producers used black tape on the camera lens to ensure the scenes were properly captured for the square frame.

Too often, creative is built in a silo. But what happens when mobile, video, data, and creative are considered strategically as a unit? Understanding the potential that data-driven creative could deliver, AT&T employed a true test-and-learn campaign.

Two video series, totaling 140 different cuts, were produced, allowing AT&T to optimize the user experience. Series 1 utilized a mix of :06, :10 and :15 assets in square, horizontal, and vertical formats with variations of text overlays, audio, and animations. These assets ran during the first 2-month campaign flight.

Media-side analytics were dissected in real-time to understand the audience, their video preferences, and viewing habits including average view times and completion rates. Providing this true feedback loop, Series 1 in-flight performance informed the production of Series 2’s creative concepts, which ran during the campaign’s next flight. Each storyline featured a cast representative of different races, ages, genders, and socioeconomic backgrounds.

To amplify the ‘It Can Wait’ messaging, AT&T partnered with Kargo for its unique access to media, effective targeting, and creative technology.

With the user experience at the forefront, AT&T distributed its creative through an immersive, edge-to-edge, auto-play video ad unit. Viewability was a prioritized metric, so the unit was fully responsive: the video started only after the player came into view. If the unit passed out of view, the video paused, but then restarted where it left off when scrolled back into view. The unit utilized user-initiated audio for optimal user experience.

Metrics from the first flight demonstrated that a :06 second video with an actor in view from the introductory frame performed best. Applying these learnings to the second flight, including incorporating more text overlays and new introductory scenes utilizing drone technology, resulted in a 22% increase in performance.

Series 1 creative ran from July-August and the optimized, data-driven Series 2 videos ran from September-October. Over the duration of the campaign, the ‘It Can Wait’ messaging was distributed across 200+ premium media partners including CBS, NBC, Life&Style, ExtraTV, TMZ!, and Today and syndicated across social channels for maximum reach.

Reached over 18.2M people in the US
Drove 13.3% lift in awareness from users who were exposed to the campaign
Delivered 45% average video completion rate (benchmark: 25-30%)
Achieved 5.21 seconds average in-view time (benchmark: 3-4 seconds)

Resulting in 140K conversions to the “It Can Wait” website where audiences were prompted to take the pledge to stop driving distracted. 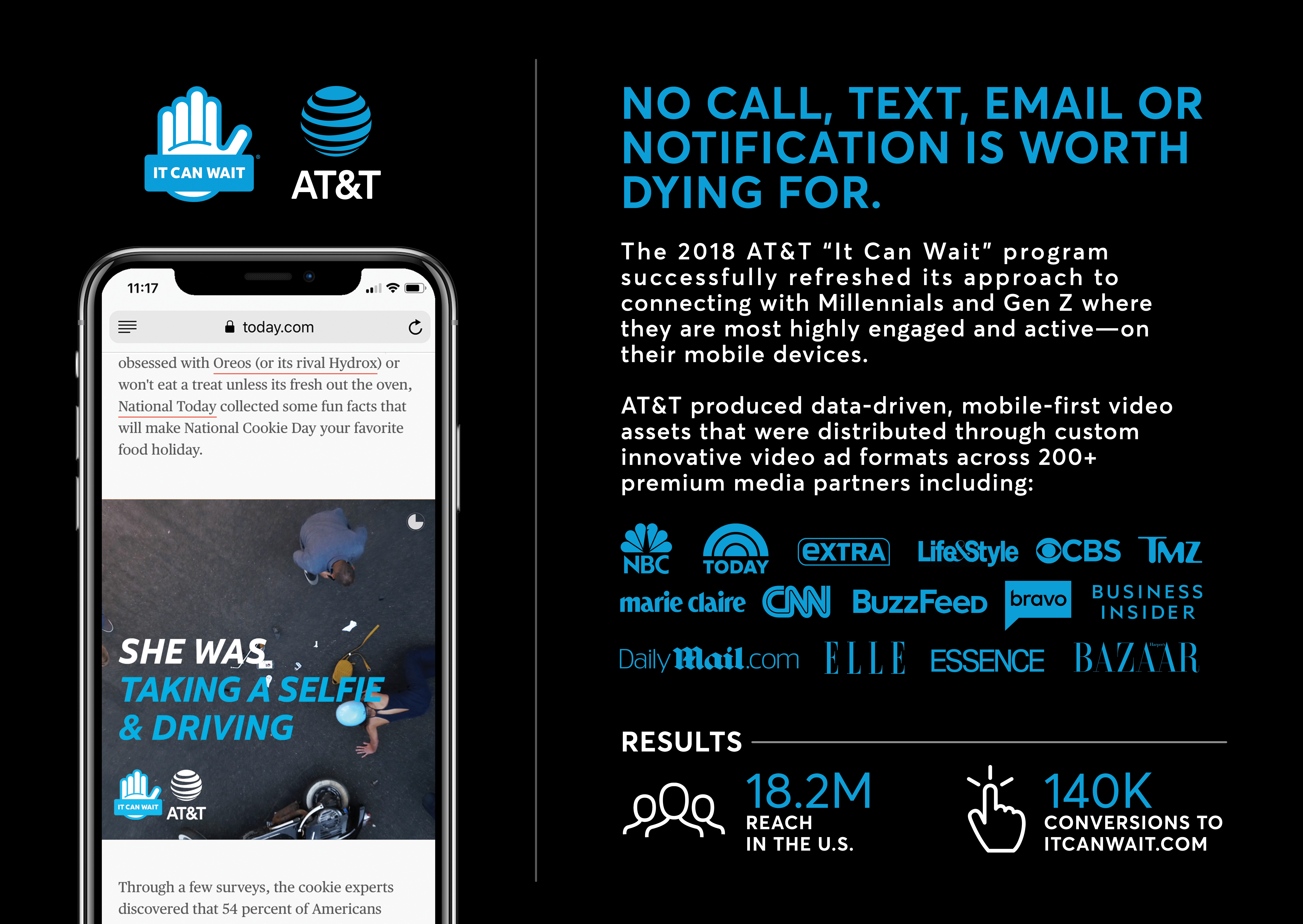