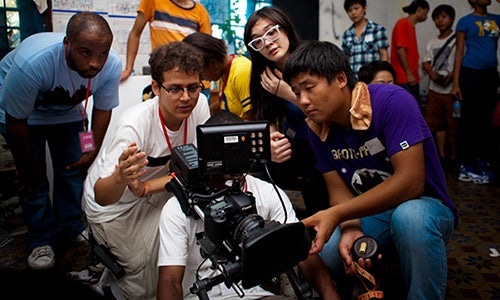 Since 2014, 21CF has formed and grown a substantial philanthropic partnership with Ghetto Film School, a nonprofit organization that teaches filmmaking to young people from traditionally underserved neighborhoods in New York and Los Angeles.

Initially founded in 2000 in the South Bronx, Ghetto Film School gives teens the chance to express their creativity in unique and imaginative ways, while imparting critical skills like improvisation, problem-solving, and teamwork. Its Fellows Program is a free, 30-month college level immersion course in cinematic storytelling and production training, providing students a thorough education on all facets of moviemaking.

The partnership with 21CF was born out of the company's commitment to support the next generation of storytellers, as well as its ongoing work to create a pipeline into Hollywood of new, diverse voices behind the camera.

21CF's overarching objective for the partnership is to leverage its resources as a global media conglomerate to significantly enhance the quality of the filmmaking education available to GFS students and deepen the pipeline of new talent into the industry. Subsidiary goals are as follows:

1. Empower young people from underserved communities with the tools and experience necessary to tell their own unique stories

4. Celebrate the students' artistic achievements and showcase their work

5. Ultimately increase the talent pool of filmmakers with diverse voices available for work in the entertainment industry.

21CF began its philanthropic relationship with GFS in 2009 as a more traditional financial backer on the sidelines, supporting existing programs that enabled diverse teenagers in New York to make short films during summer break. However, as the partnership developed, 21CF leadership realized that the two organizations' shared commitment to telling stories and developing storytellers meant that 21CF had far more to offer GFS and its students than just financial funding. Additionally, 21CF wanted to expand the program to the heart of the industry: Los Angeles. The company thus expanded its support in 2014 by becoming the founding sponsor of a new GFS campus in Los Angeles and committed to open its own doors to the students in unprecedented and innovative ways.

When crafting the overall strategy for its partnership with GFS, 21CF sought to look beyond the traditional donor/recipient relationship and instead develop meaningful new ways to enrich the organization's educational programming, empower these communities with new tools, and make a lasting difference in the lives of young people. The guiding principle for the partnership is as follows: the more access to 21CF equipment, resources, and personnel the students have, the more they will grow as storytellers and the more prepared they will be to enter the media and entertainment industry.

With this in mind, 21CF now covers 100% of GFS' core operating costs and has taken a direct role in enhancing the student's training, celebrating their achievements, and preparing them for future employment. Efforts to do so include:

* Inviting students to exclusive screenings of forthcoming Fox films, as well as panel discussions with cast members, writers, and directors

* Partnering with GFS's Industry 101 course to teach students to produce promotional videos for forthcoming shows on FOX, FX Networks, and other channels

Throughout the program, students also undergo college application advising and test prep support, as well as connections to paid internships and job offers at top media and creative companies.

21CF continues to look for new and dynamic ways to use its resources to enrich students' education, engage their imaginations, and prepare them for their future careers.

GFS currently reaches 1000+ young people in New York and LA every year through its fellows, high school and pre-professional programs. By the time they graduate, students have created their own short films, worked with cutting-edge filmmaking technology, developed projects for real-world clients, and learned directly from some of the industry's leading visionaries. GFS participants speak openly about the value of these experiences not just in preparing them for careers in creative fields, but also in finding their own voices.

In addition to funding GFS' operations, 21CF continues to utilize its resources to enhance the students' education. Dozens of executives and colleagues have worked together with GFS students on various projects, and the company has hosted every GFS class on the Fox lot over the last four years. GFS LA students have also been mentored by marketing teams for a Industry 101 course every year since the location opened.

21CF and GFS also work to connect graduates to paid positions in the industry. After graduation, alumni enter the organization's young professionals network, The Roster, and are connected to 21CF recruiters, giving a direct line into the industry and an opportunity to put their skills to use.

The partnership with 21CF enabled GFS to positively impact new communities, providing a pipeline for diverse, creative voices to enter the industry and giving many more young people a pathway to success. 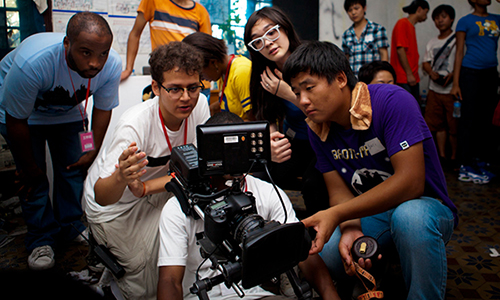