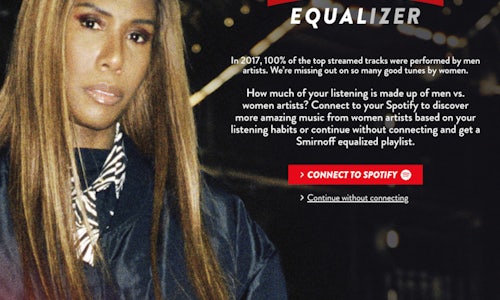 As a global brand, Smirnoff is challenged to remain relevant and equitable on a global scale. As a result, the brand takes on global initiatives that align to its core purpose of inclusivity – the belief that Smirnoff can use the power of good times to make the world more inclusive.

Often, at the heart of good times is music, which is why Smirnoff, over its long history, has celebrated the music industry. But in 2016, Smirnoff realized that the music industry itself wasn't very inclusive. In fact, in the last six years, less than 10% of artists nominated for Grammys were women. This led to Smirnoff's goal of equalizing headliners at music festivals around the world by 2020. Globally, gender bias and inequality are increasingly being exposed through progressive movements, such as #MeToo. Yet, despite this progress, Smirnoff and Spotify discovered that ten out of ten top streamed tracks on Spotify were from men artists. While people began waking up to gender disparity in music, our listening habits didn't reflect the change we want to see. While success for this initiative is in sight, in 2018, Smirnoff asked itself how it could do more to support inclusivity in music.

This is the story of how Smirnoff, an activist brand in music, and Spotify, the world's largest music platform, came together to transform peoples' listening habits at scale by increasing the number of women artists they listen to.

Our strategy sought to create a platform that would create personalized engagement, offer solutions, and ultimately lead to more discovery, exposure, and opportunity for great women artists.

In collaboration with Spotify, a partner with a shared passion for improving gender parity in music, we launched a music platform built for progression, the Smirnoff Equalizer. With a dynamic API at its core, The Equalizer was able to analyze a Spotify user's listening habits against 90% of Spotify's catalogue in-real time and deliver personalized recommendation to empower change and create conversation.

After users connected their Spotify accounts, the Equalizer:

1. Presented them with their individual music streaming habits highlighting the percentage breakdown of men vs. women artists they listened to, showing how equal, or unequal, their listening habits were.

2. Empowered them to make change by providing a solution – a personalized 'equalized' playlist of men and women artists, based on their listening habits, and a 'slider' that allowed them to add even more women artists to their playlist.

3. Encouraged sharing of their results and playlist with friends through social media.

On International Women's Day, Homepage Takeovers were launched across Spotify to secure a strong share of voice and take advantage of the conversation around gender equality. To drive additional reach, we launched supporting off-platform activations across our key markets through social media including Facebook and Instagram, as well as in-market publishers including Elle, Shazam, Vevo and Nine Honey.

Going beyond digital media, we partnered with Global Radio and Live Nation to further gender parity in festival line ups across Europe.

Surprised by their listening habits, people shared their results and the world took notice. Press also took note as the Equalizer secured placements in Billboard, Forbes, Pitchfork, Yahoo and The Independent.

Through the Equalizer, Smirnoff helped people move one step closer to achieving gender parity through music by increasing the number of opportunities for women artists to be heard. This may seem like a small step, but music is at the heart of many cultural moments and inspires so many, therefore equality in this field of music stands to have ripple effects in many others.

Created +2.7 million opportunities for women artists to be discovered

+60% connected their Spotify account to analyze their listening habits

+604,000 people driven to the Equalizer experience

Smirnoff strengthen its role in inclusivity:

And in brand results: 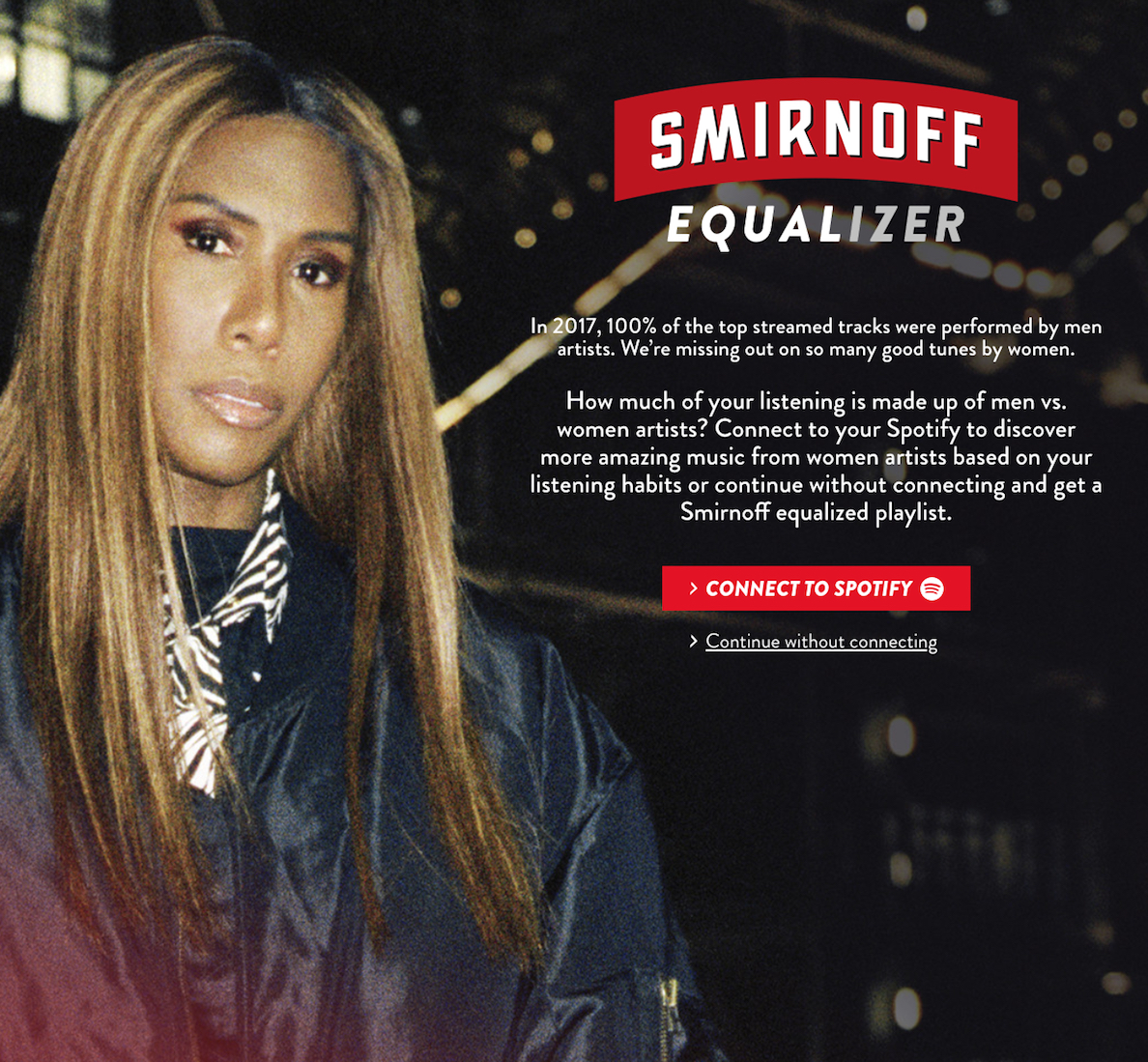 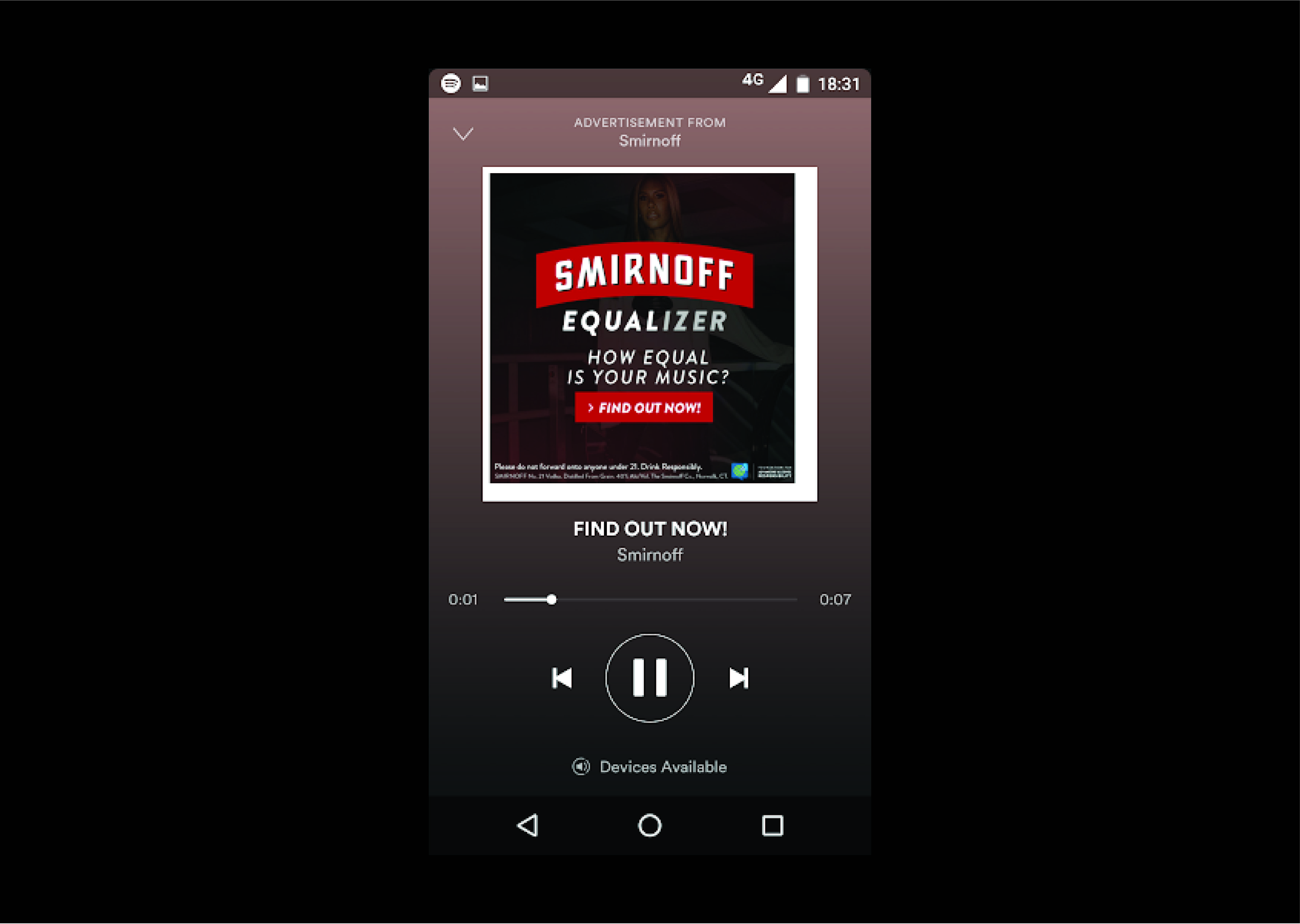 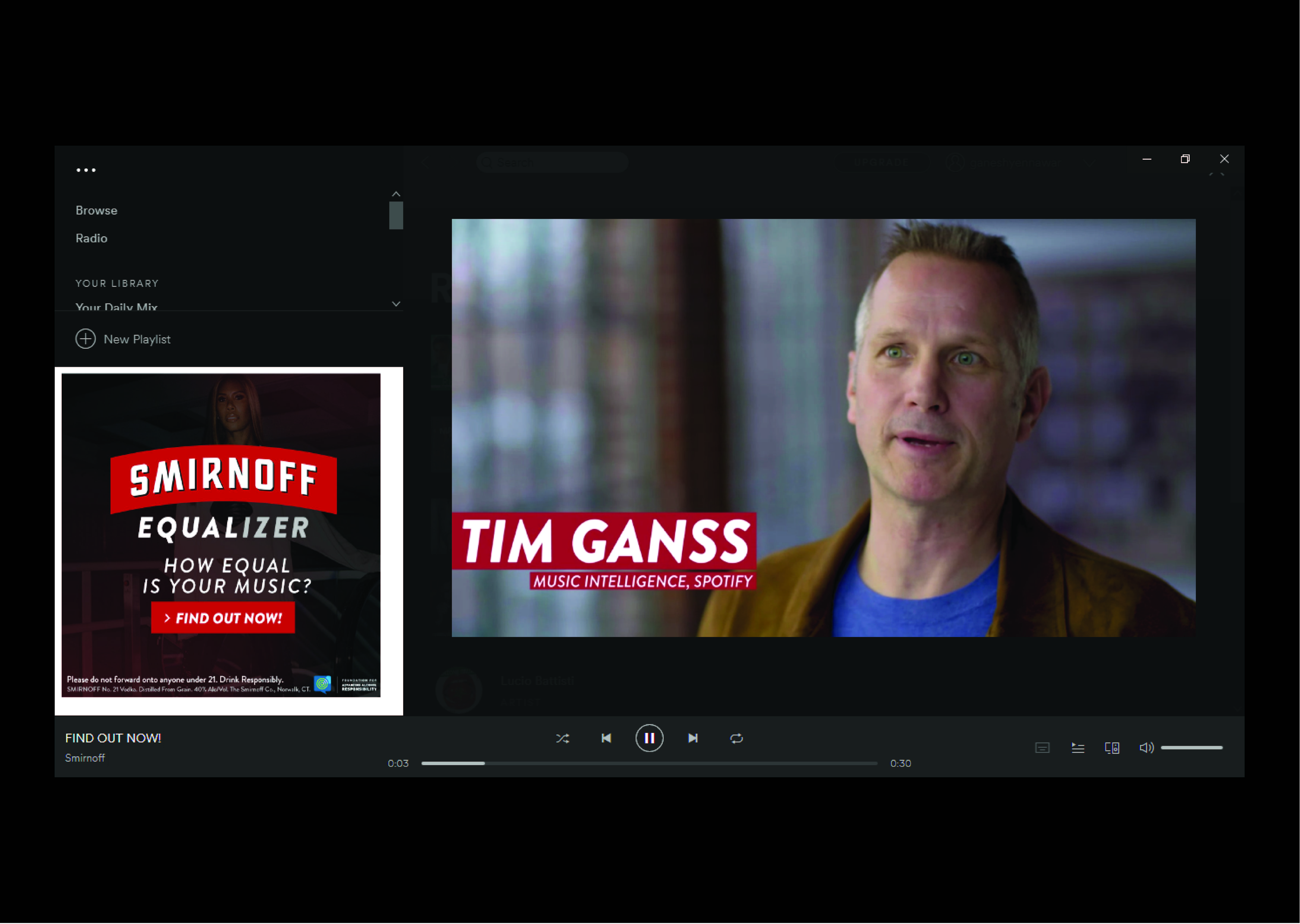 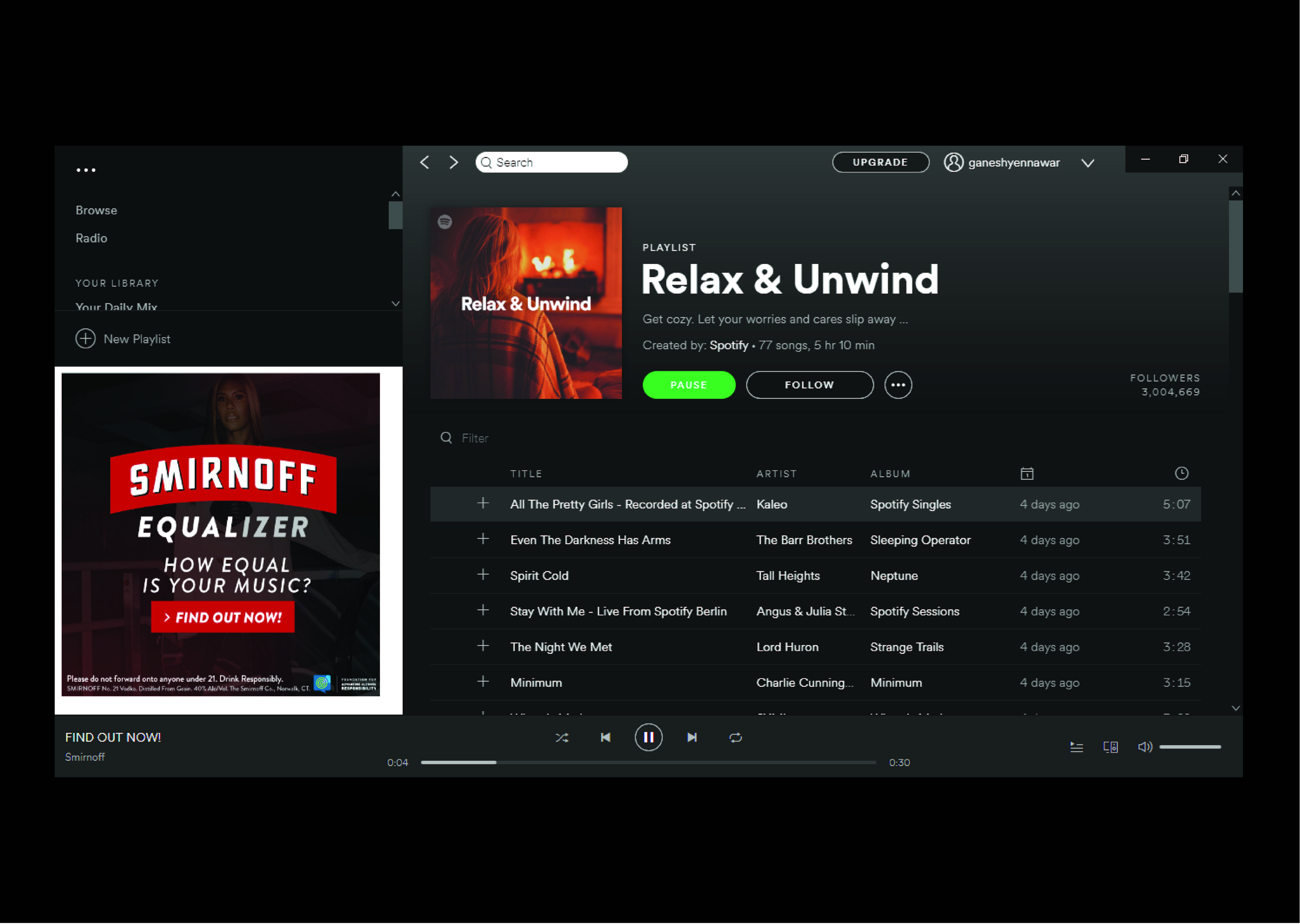 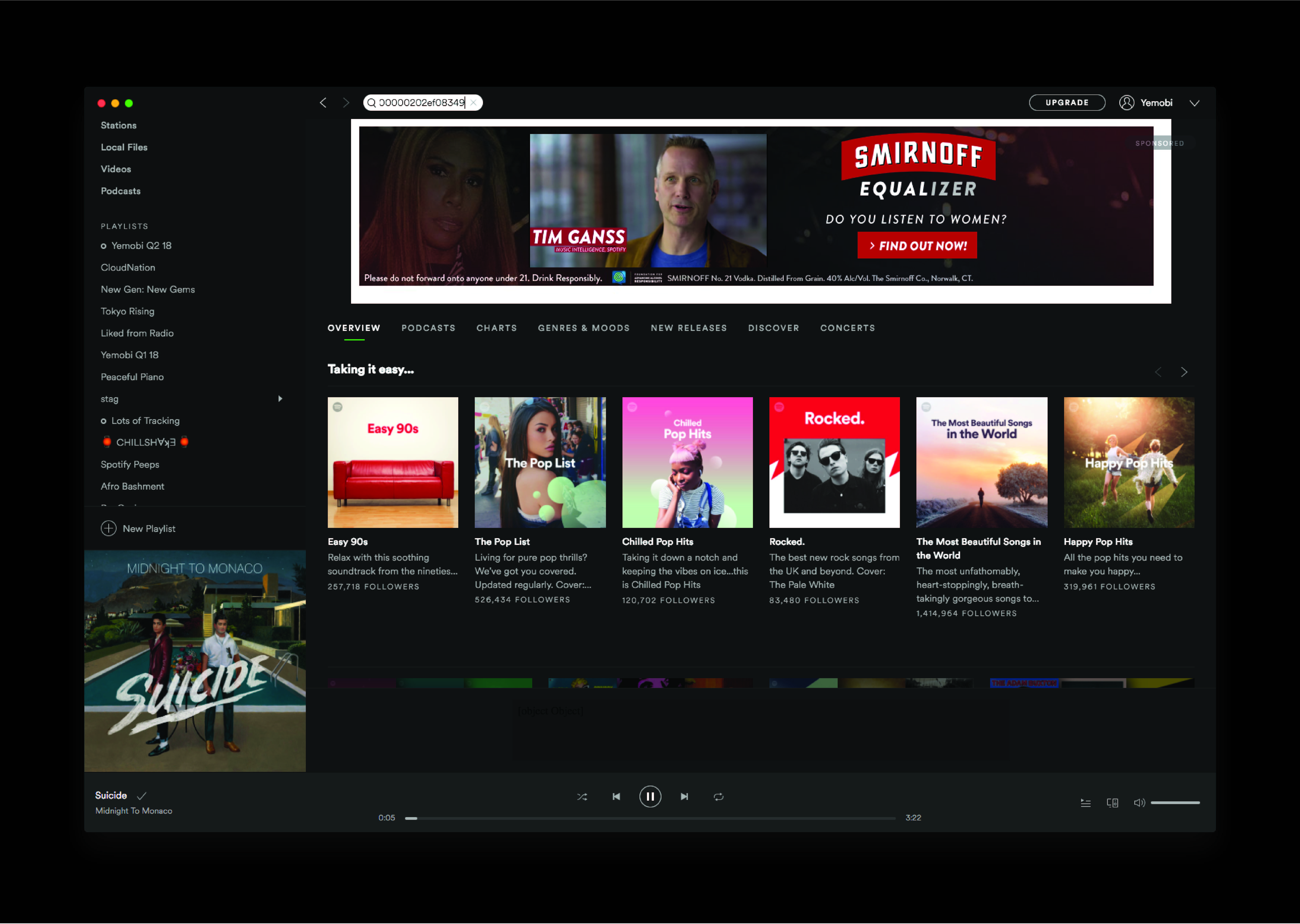