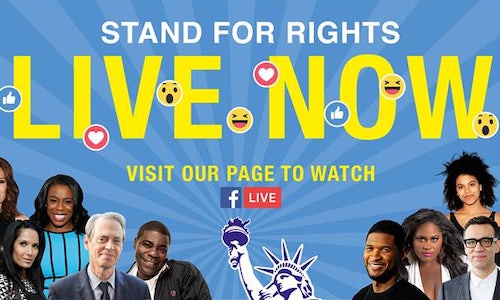 On March 31st some of entertainment's biggest names got together for "Stand for Rights: A Benefit for the ACLU", a modern-day telethon, streamed on Facebook Live.

With more than 2 million members, activists, and supporters, the ACLU is a nationwide organization that fights tirelessly to protect and safeguard everyone's rights. It was founded to ensure the promise of the Bill of Rights, and to expand its reach to people historically denied its protections.

The main goal of the evening was to grow awareness about the ACLU's work and raise the necessary funds to support their ongoing work in the courts, in Congress and state legislatures, and in the streets to protect the civil rights and liberties that truly make America great.

Using the power and reach of Facebook, we activated a global audience to come together and drive more awareness around the importance of protecting civil liberties and used live streaming technology to create immediate impact.

For almost 100 years, the ACLU has worked to defend and preserve the individual rights and liberties guaranteed by the Constitution and laws of the United States.

From establishing new privacy protections for our digital age, fighting for equality for the LGBT community, stopping police violence, ending mass incarceration, and preserving the right to vote or the right to have an abortion, the ACLU truly fights the toughest civil liberties cases and there's never been a more important time for freedom-loving people to support it.

This unique live fundraising event has not only allowed a new way to reach fans and supporters, but also open a dialogue around the key issues the ACLU fights every day.

Utilizing Live Studio's Scheduling Too, the ACLU was able to set a 'reminder' prior to the stream, so that Facebook users could opt-in to be notified when the stream started. The scheduling tool also enabled audiences to begin donating before the stream– generating over $52,341 before even going live - fueling dynamic social buzz around the event.

Several of Live Studio's real time interactive graphics and features were incorporated into the streams to drive audience engagement and social reach. In addition, each stream included a unique integration of Facebook's Donate button giving viewers the opportunity to donate to the ACLU without ever leaving the Facebook Live broadcast.

The evening raised over $500,000 with $250,000 donated directly through Facebook Live streams. The 4 hour telethon also reached over 2 millions views and generated thousands of comments, shares and likes.

Video for Stand For Rights A Facebook Live Special 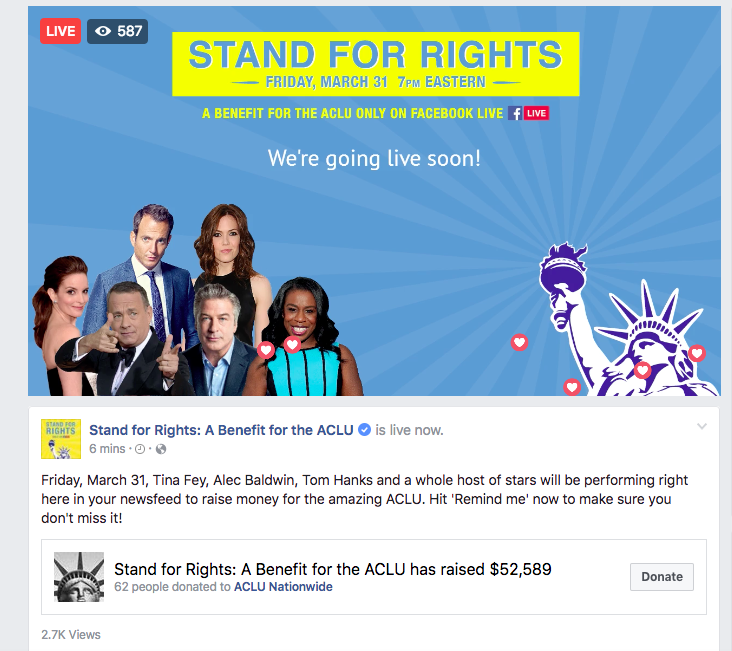 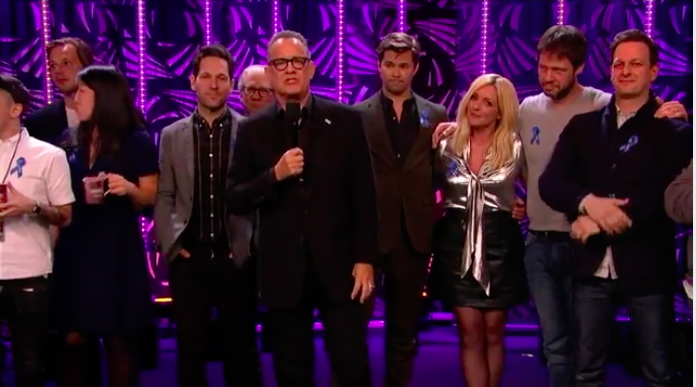