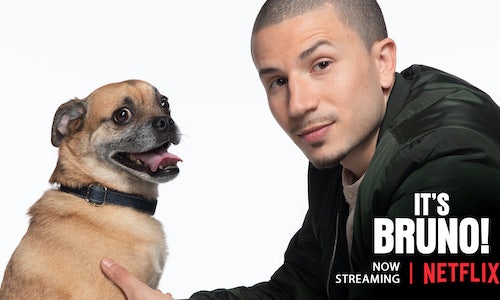 It's Bruno! - From Rescue to Bone-a-fide Star

Bruno, a puggle (pug and beagle mix), is a rescue from Brooklyn, New York adopted by Solvan “Slick” Naim. Slick, an up-and-coming director, was teaching his new puppy how to “sit” and “lay down,” and Bruno learned it in less than 3 minutes! After that, Slick knew Bruno, with his expressive face, was meant to be in front of the camera. Slick got to writing It’s Bruno!, a comedy series about the misadventures of Malcolm (played by Slick), a man living in New York, and his most treasured companion, a puggle named Bruno (played obviously by Bruno). Stage 13 picked up the series and partnered with Netflix to produce and distribute the short-form series.

There was no doubt that the adorable Bruno needed his own Instagram page, not only to document his journey from being a rescue pup to starring in his own Netflix show, but to connect with fans of It’s Bruno! in his own voice. The Bruno Instagram page offered audiences a look at the life of the new Netflix star from his humble beginnings of running around New York with his besties Angie and Bella, Slick’s other rescues that also appear in the show, to behind-the-scenes look of the show and its following success. The objective was to have Bruno be an Instagram influencer and use his influence to spread the word to watch It's Bruno! on Netflix.

While there are hundreds, if not thousands, of cute dog/pet Instagram pages, Bruno is the only one that can say he has his own Netflix show, allowing his page to offer content and perspective from a very unique view. From #PuggleStruggles to stardom, fans got to know the ins-and-outs of their new favorite TV pet and interact with him. Whether Bruno was just chilling with Slick reading new scripts or being featured at events like a Pup-Up Gallery or advocating for rescue shelters, fans were always invited.

The Bruno IG page launched a few weeks prior to the official announcement of show, where Bruno was simply a cute dog that moved from Brooklyn to Los Angeles with his human to pursue his acting dream (like most moving to L.A.), seeding his humble beginnings. Upon getting situated and auditioning, the news broke that Bruno will star in his own Netflix series. From there, the narrative of the page shifted to include filming and behind-the-scenes look from set in addition to his daily life of barking away the mailperson and the occasional meme. The Bruno page didn’t strictly focus on just Bruno and often featured other dogs from the show including Angie and Bella, as well as Slick and other co-stars to help introduce the world of It's Bruno!

When It's Bruno! finally launched on Netflix, driving thousands of new followers, the strategy was to maintain a steady cadence of content, but ramp up the fan engagement, including with more dog-influencers, to establish Bruno's newfound popularity. To celebrate the launch of the show, It's Bruno! GIPHY stickers were created for everyone to use for their Instagram Stories.

One of the most memorable scenes from the show is when Bruno is competing with another dog as to who could “sit” and “down” better, which grew to become a challenge online, organically, with people recording their dogs doing the same "sit" and "down" prompts. Capitalizing on the moment, Bruno named the challenge the #ItsBrunoChallenge and asked people to partake and tag @itsbrunoshow so he could share and react. Hundreds of pet owners posted Instagram videos/Stories featuring their pets (dogs, cats, and even bunnies!) doing the challenge (and any other additional command for added flair), to great success or hilarious failure, which the Bruno gladly engaged with.

Bruno's stardom extended offline as well as he was booked public appearances for meet-and-greets. From being the guest of honor at the DOGust Event at PetSpace LA celebrating all rescues/adopted pets with uknown birthdays; a panelist interviewed by the influencer Crusoe the Dachshund at Pet Con; a guest speaker at the Best Friends Super Adoption Event; and having his own 2-month long Pup-Up Gallery from Healthy Spot featuring BTS photography, Netflix box art, art from the actual show, and a photo opportunity with a stand-in Bruno on a built out stoop in front of a New York brownstone backdrop. Bruno got the red carpet treatment.

The It's Bruno! Pup-Up Gallery was a big success. Fans with their dogs lined up early for both meet-and-greets with the line extending out the door. The Bruno gallery was one of the most successful galleries in Healthy Spot history driving 34% more foot traffic to the stores than the previous top gallery to the point Healthy Spot kept the gallery up for an additional month. The gallery also raised the profile of Bruno's Instagram through more influencer exposure growing the following by 14% and engagement by 19% over a month period. We believe the influencer/celebrity engagement/relationship building from the gallery also helped garner It's Bruno! an Emmy-nomination.

Video for It's Bruno! - From Rescue to Bone-a-fide Star 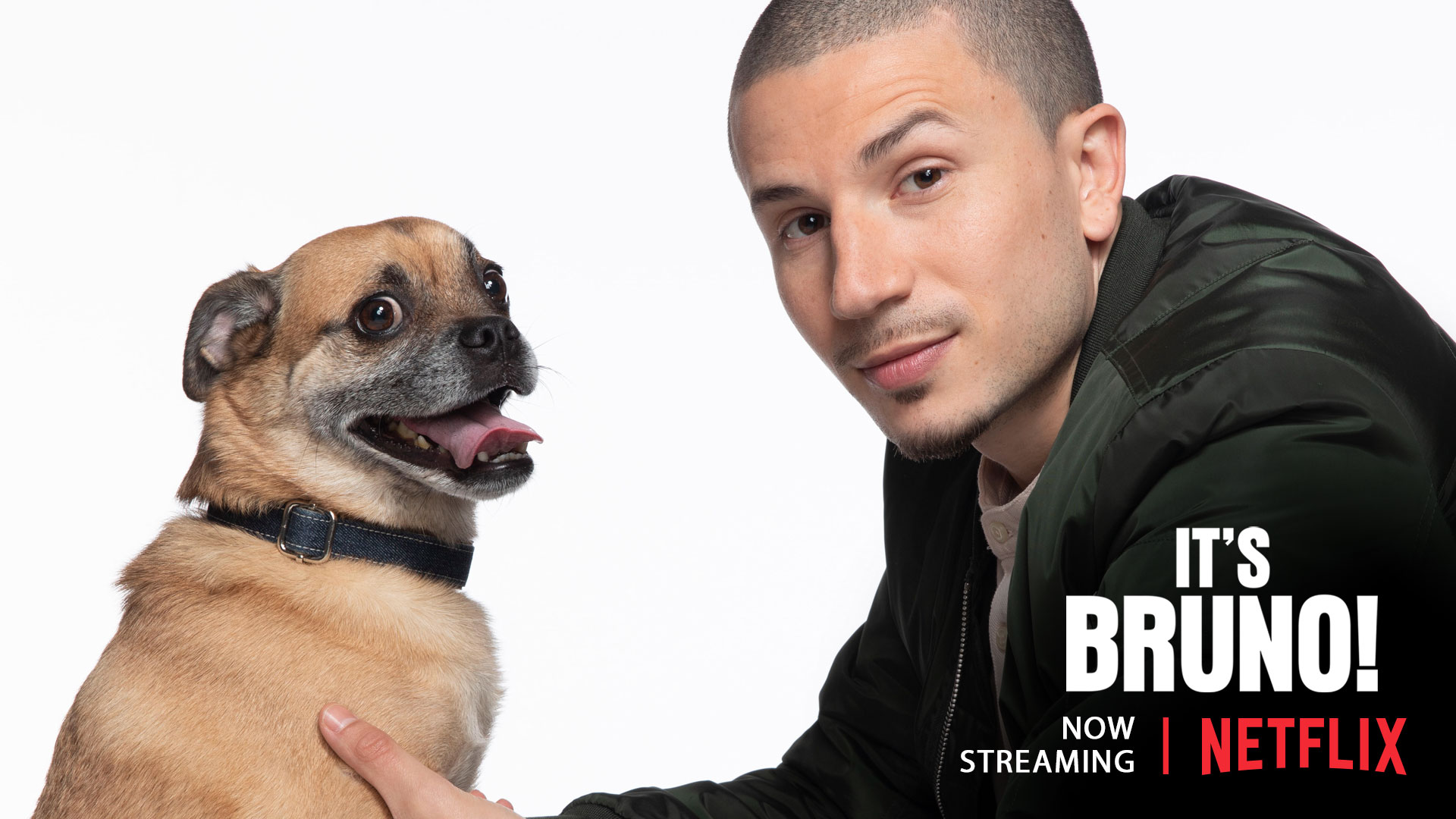 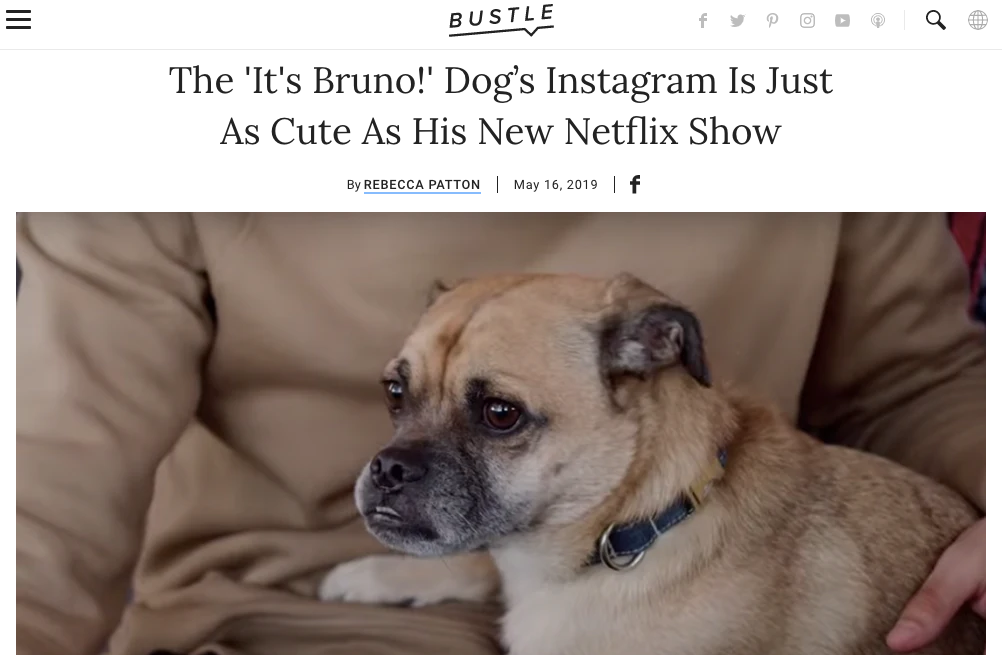 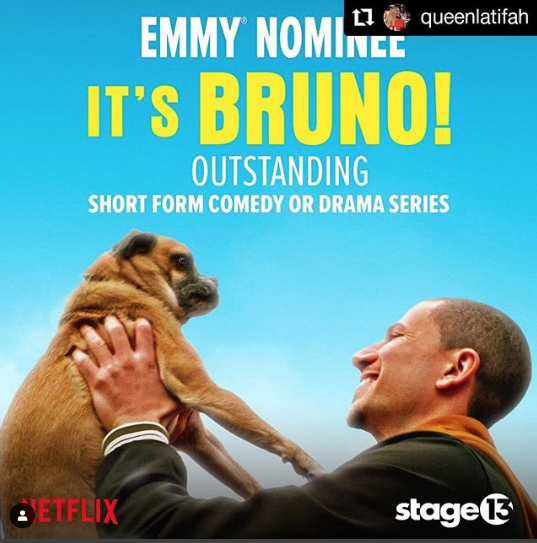 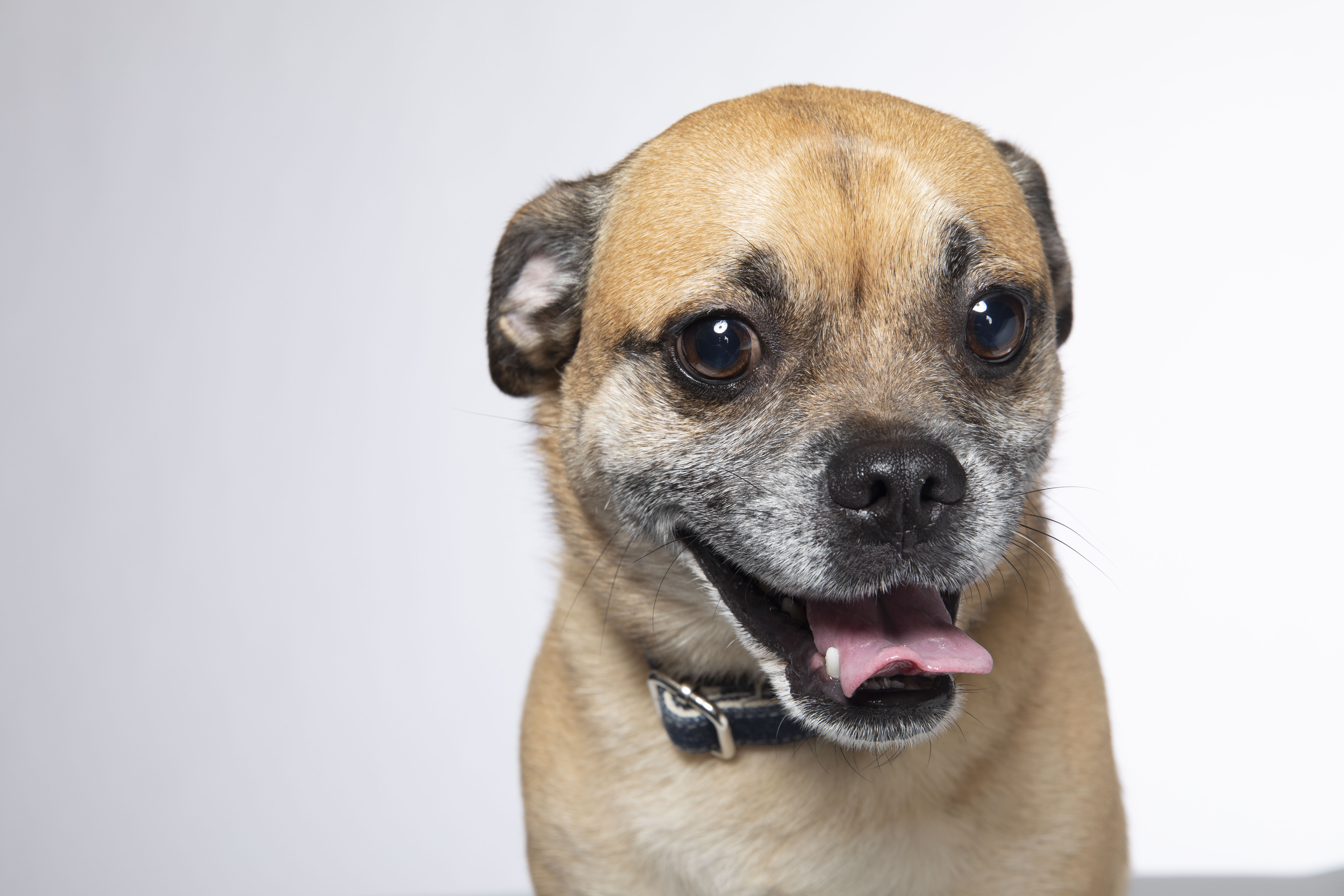 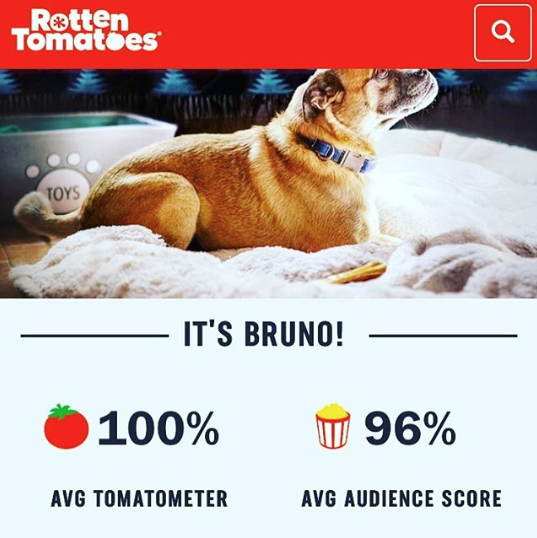 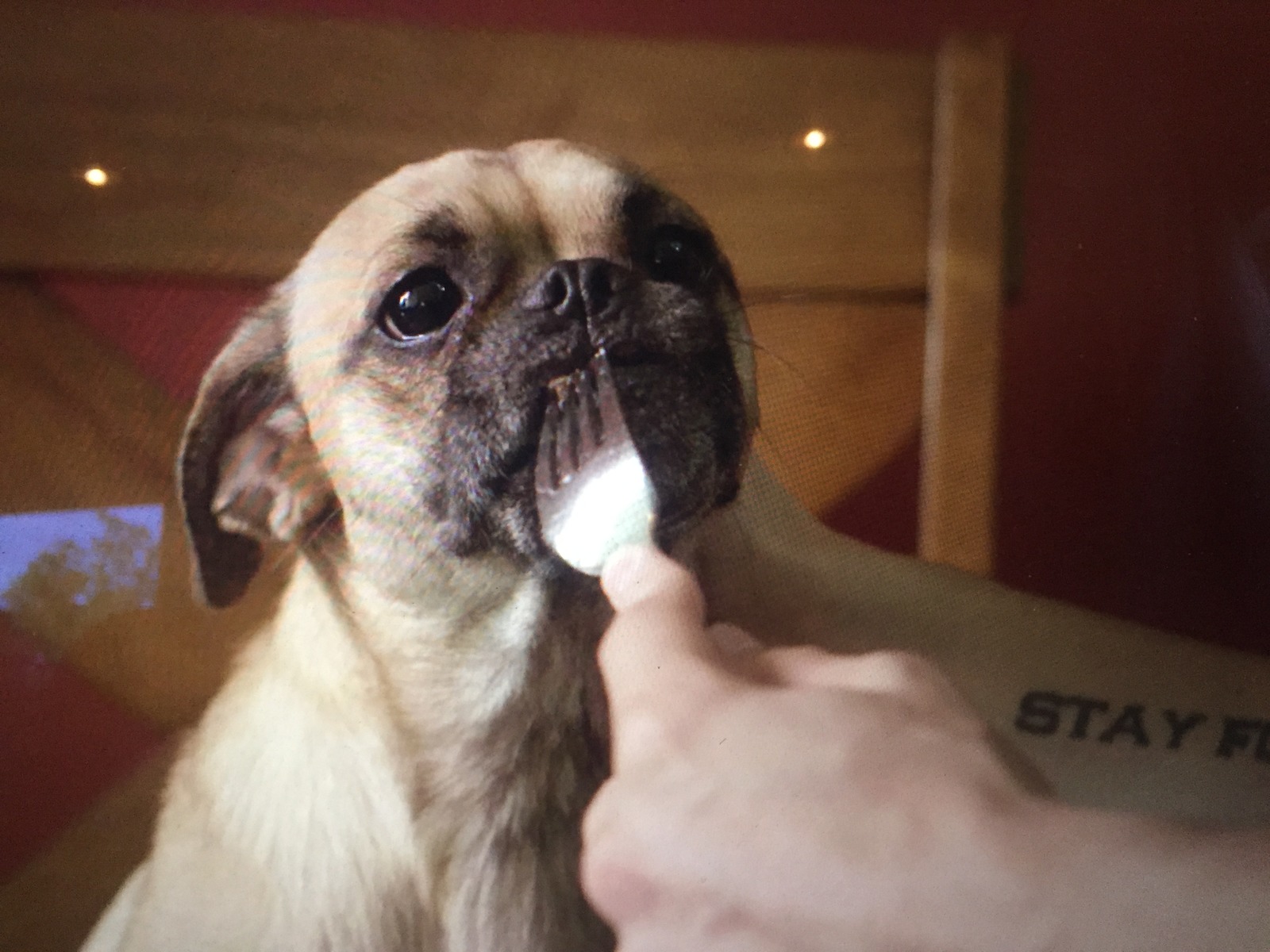 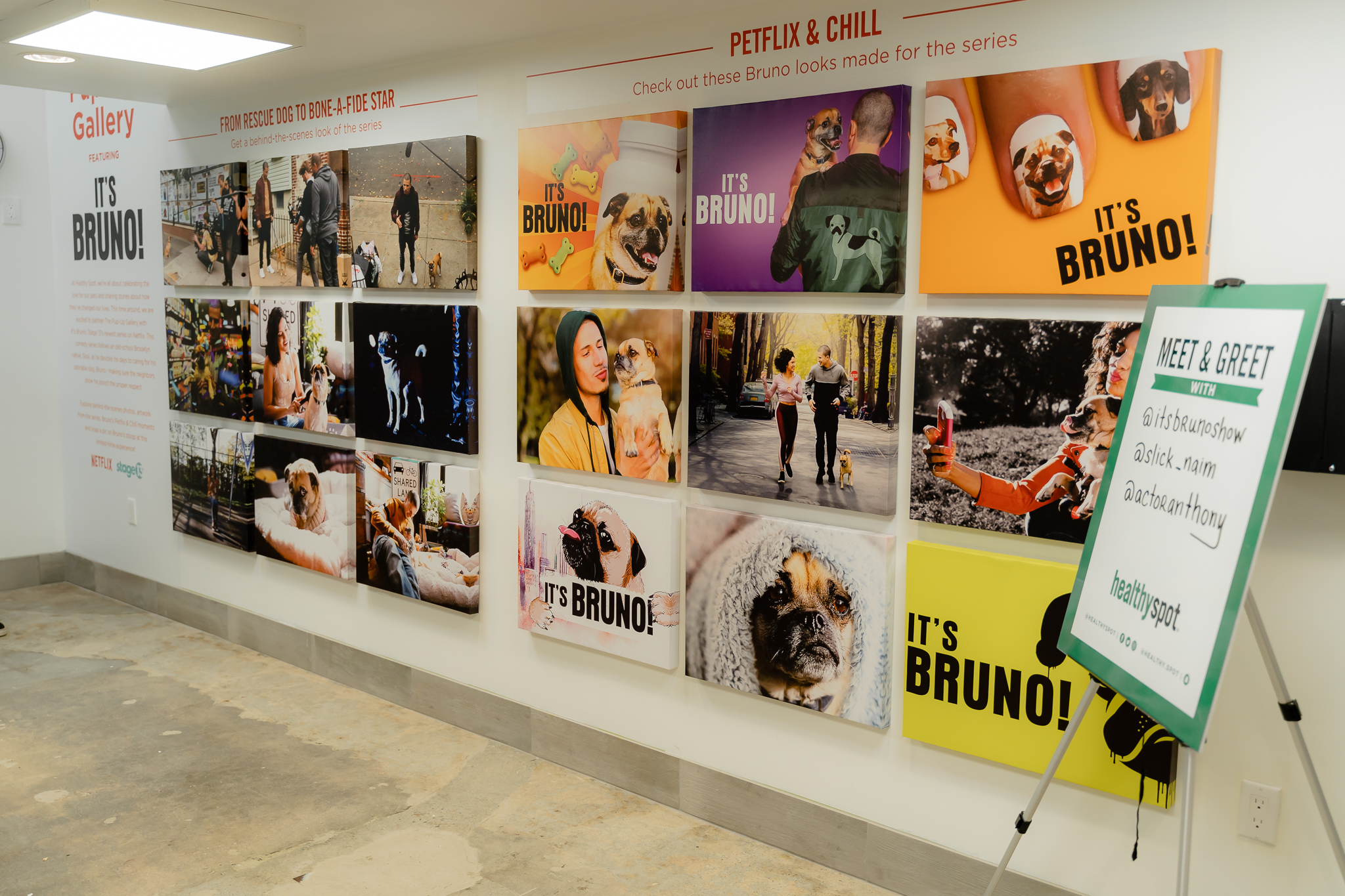 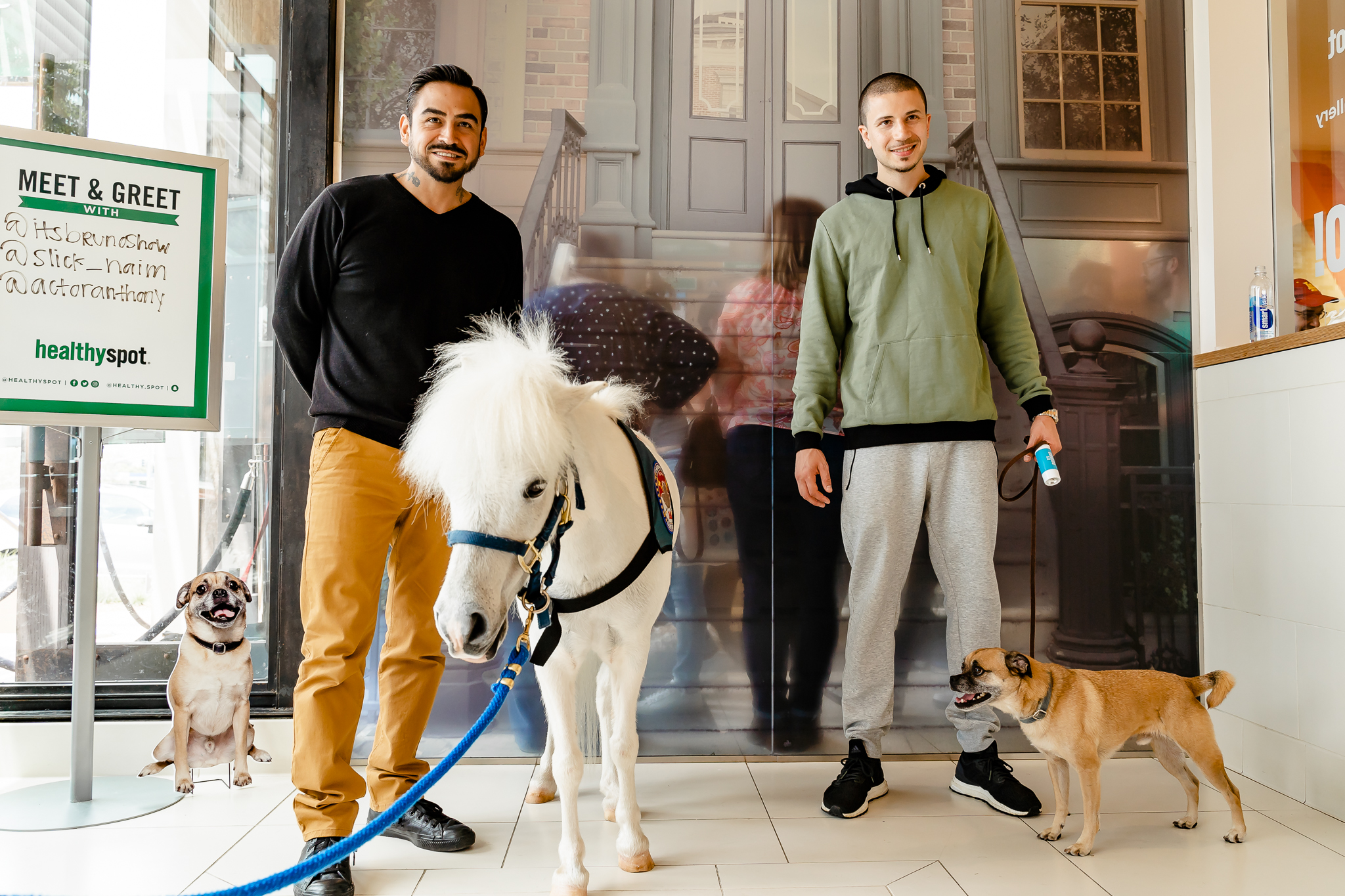 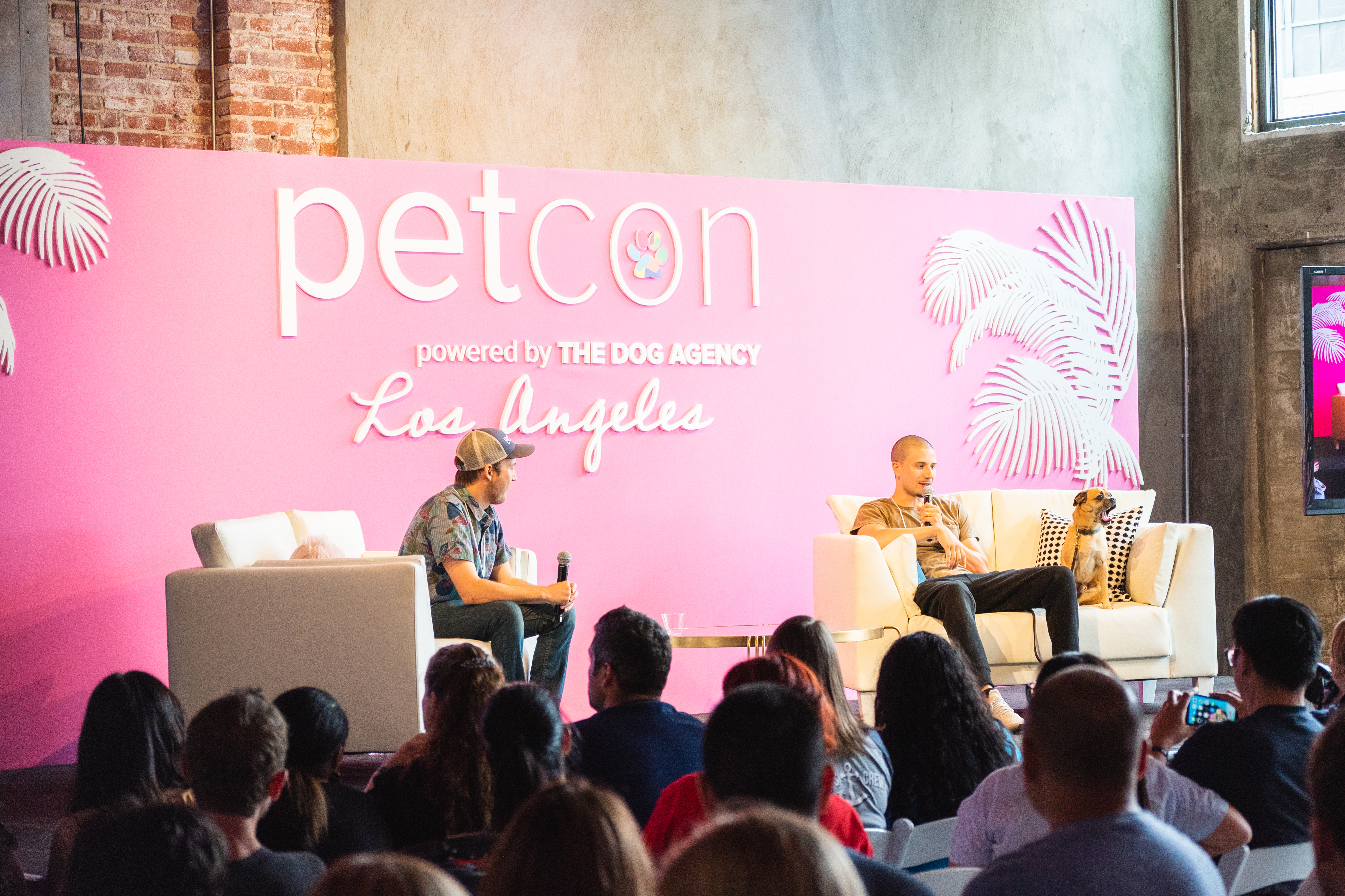 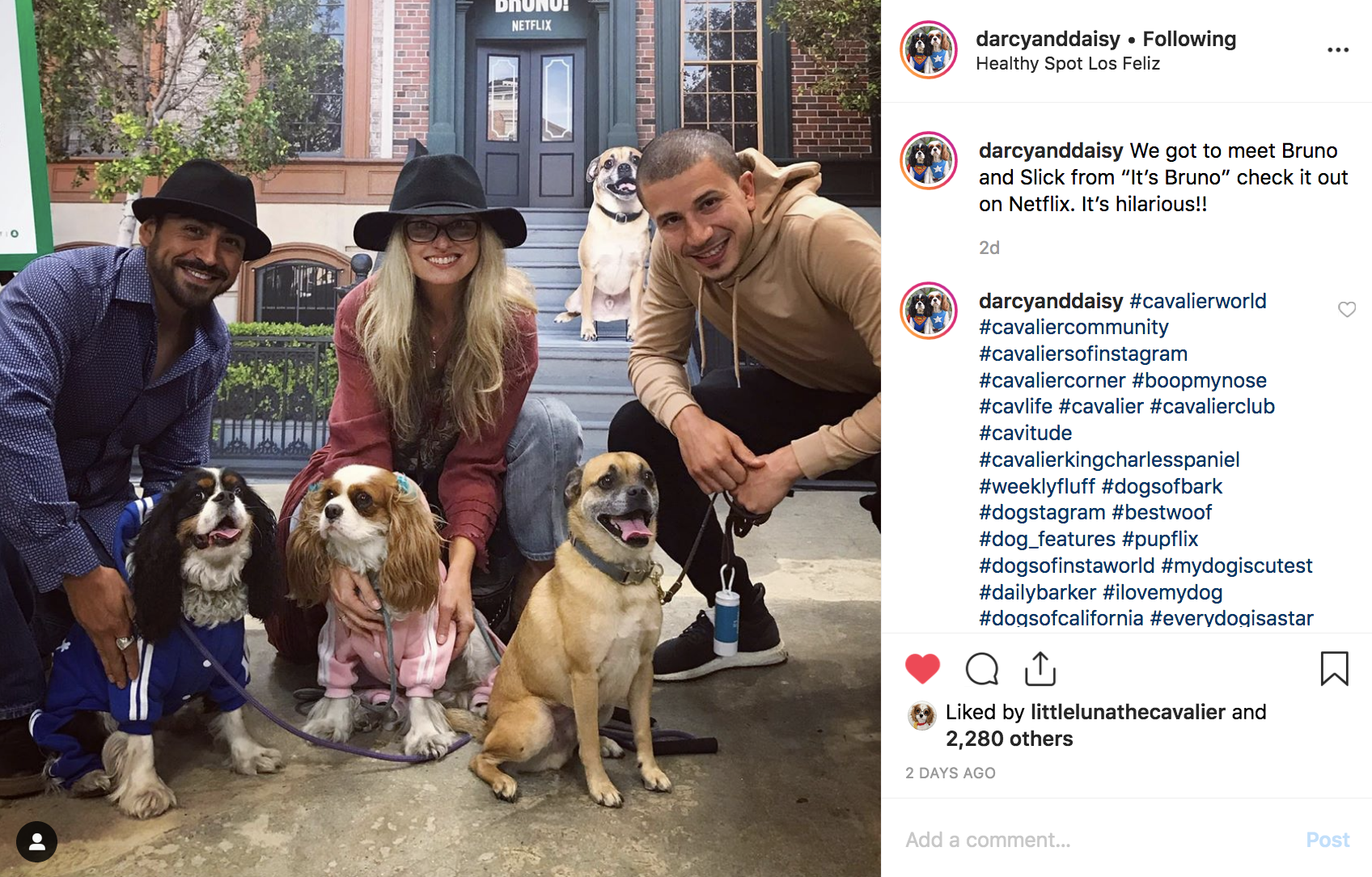