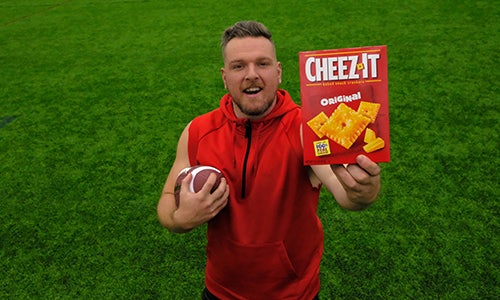 To help make Cheez-It Crackers an essential part of consumers’ together time, the brand sought to enhance moments together during college football season with the cheesy crunchy satisfaction of Cheez-It.

More than any other sport, football fans indulge in food the most while watching the game. To demonstrate how the cheesy crunchy satisfaction of Cheez-It enhances the college football social experience, we targeted the Entertainer, as defined by:

In 2018, its first year as the title sponsor and official snack of college football, Cheez-It set the standard for media attention and social conversation with an interception-fueled game between TCU and Cal. After being named a “game to be celebrated for the ages,” Cheez-It and Weber Shandwick set out to make the 2019 Cheez-It Bowl even bigger as the most absurdly social event in all of college football and the first cheese-infused bowl game in history.

To achieve this, our objectives were:

With 35 games during bowl season, it is challenging to stand out. Cheez-It and Weber Shandwick curated a program to fuel cultural breakthrough during the crowded bowl season to ensure the Cheez-It Bowl stood out as the most absurdly social event in all of college football and the first cheese-infused bowl game in history. We employed the following tactics to help maximize exposure, drive social chatter on Twitter – a priority channel for our target - and make the 2019 Cheez-It Bowl unforgettable:

Weber Shandwick recruited Pat McAfee to serve as the Cheez-It Bowl’s newly minted Master of Cheez.  Since his retirement from the NFL, the former punter has turned viral social moments into a cult following. McAfee makes headlines for his inside stories on current players and the humor he brings to the dry world of football commentary. At the start of the program, McAfee had a social following 9x greater than ESPN’s Monday Night Football commentators combined. The partnership delivered a direct, authentic tie to our campaign’s storyline and helped gain awareness for the program at scale.

Leveraging his popularity and 2M+ Twitter followers, we created numerous videos, optimized for the channel, that tapped into Pat’s lively personality and highlighted all the Cheez-infused moments fans could expect from this year’s Cheez-It Bowl. In the month leading up to the game, Pat rallied college football fans by dropping sneak peeks via a Twitter content series and participated in a media day to drive earned coverage. Posts highlighted Pat’s excitement for his role in this year’s game, shared details about a fan contest to join him field side, what viewers could expect at this year’s game and Pat’s POV on the 2019 college football season. Pat’s big personality and experience speaking to media made the interviews standout.

To drive additional engagement, college football fans were offered the opportunity to attend 2019 Cheez-It Bowl and join the Master of Cheez in a two-story Cheez-It “box” for an unmatched game experience filled with cheesy, crunchy satisfaction. For a chance to attend, fans were simply asked to share their passion for Cheez-It using photo or video on Twitter with the hashtag #CheezPickMePatEntry. The contest drove user generated content, social chatter and the winners brought their A-Game, with a custom Air Cheez One, Cheez-It episode of cribs and giant bathtub full of Cheez-It crackers.

Finally, fans watching from home were able to get in on the action by sharing their game celebrations – during any punt, play or score – using the hashtag #ScoreCheezItEntry on Twitter for a chance to win a year’s supply of Cheez-It.

Altogether, the Cheez-It Bowl campaign exceeded expectations on every level: 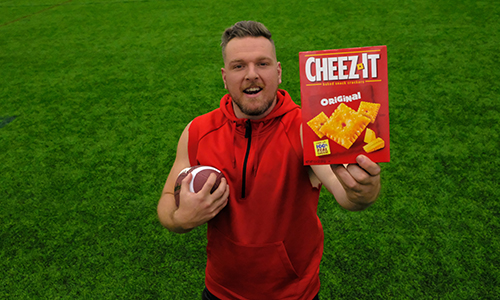