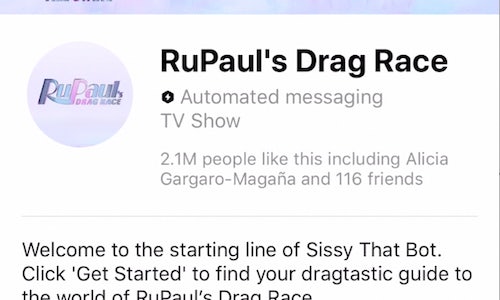 To commemorate the 10th season of RuPaul's Drag Race, we launched a Facebook messenger chatbot to give the 2M+ Facebook fans the opportunity to be served Drag Race realness wherever they are. The BOT, affectionately referred to as SISSY THAT BOT, is essentially a Drag-O-Pedia, loaded with all of the information you would ever want to know about Drag Race and more. Most of the Drag Race fandom is highly engaged so we wanted to create an experience that could also work for the newer audience we've started gaining since the show moved from Logo to VH1.

We worked with the BOT platform to create a chatbot structure that would be intuitive to Drag Race fans of all kinds and leave fans GAGGING for more. The BOT can answer everything from Who was the guest judge on Season 3 Episode 2? to When was the original premiere date of the series? We've also hidden Easter Eggs for the fans to find custom messages from the Queens, playing off some of the most iconic moments in Drag Race herstory. To support the launch, we leveraged the RuPaul's Drag Race social accounts to help spread the word to fans. The BOT is a great way to keep fans engaged throughout the off-season as well by launching games, horoscopes and more each month. Year round the fans get slayed with all the charisma, uniqueness, nerve and talent the BOT has to offer.

Since its launch, the BOT has sent over 1.3M messages and had almost 90K unique users. During Season 10, the BOT saw over 22 messages per user which was higher than seen across similar BOTs (next highest is 15). We also saw about 20% of the users click through to watch content on VH1.com, helping to drive video views on our owned & operated.