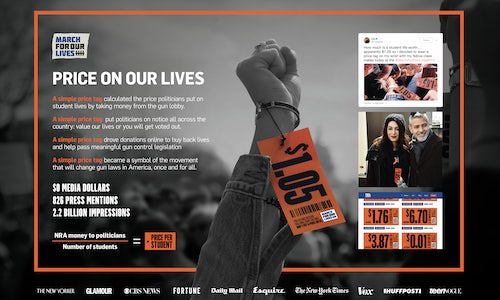 Price on Our Lives

Winner in Social Movement, On a Shoestring

We created a wearable $1.05 price tag to symbolize the price politicians put on student lives by accepting money from the NRA gun lobby, and show how they value money more than student lives. The price on the tags is calculated by dividing the total amount received from the NRA by the total number of students. These downloadable price tags were distributed on social media via student activists like Emma Gonzalez (1.5M followers) and David Hogg (782.4k followers). Student activists also wore the price tags for interviews and spoke about them at the gun control march in Washington D.C. The price tags not only called out politicians who take money from the NRA, they became central to the sustained message of gun reform in America as well as an online fundraising tool for the movement.

The price tags were launched on social media to mobilize the student activists' millions of followers and encourage them to download, print and share. Price tags were also worn and prominently displayed by speakers and celebrities at March For Our Lives events, in order for the symbol to become iconic and drive press and awareness of the price tag message and March For Our Lives, so that American politicians and the NRA heard loud and clear that valuing gun money over lives would no longer be tolerated—in the form of 826 press mentions generating 2.2 Billion media impressions. With this coverage of the $1.05 price tags, we had a donation page ready to turn the price of lives in states across the country into an online donation tool for the movement. Moving forward, the price tag idea is being used to rally gun control activists at campaign events and demonstrations in each individual state, by calculating the price of student lives for every politician that accepts money from the NRA and those politicians to be held accountable in every corner of the country.

Originating on a few viral social media posts by student activists, the orange price tags made their way into the sea of millions of people at March For Our Lives events across the country and on stage during activist speeches and celebrity performances in Washington D.C. Some of the biggest names wearing the price tags that day were George and Amal Clooney as well as Steven Spielberg and Kate Capshaw. The media took notice. The price tags were featured on segments aired on CNN and Good Morning America, with reporters asking politicians for comment, and on relevant sites like Vox, Slate, Huffington Post, and Teen Vogue. Overall, there were 826 press mentions with headlines explaining the price tags and issuing a warning to politicians who accept NRA money, generating over 2.2 Billion media impressions. Price tags were then created for other states where NRA-backed politicians hold office, which we used online as a fundraising tool for people to "buy back" politicians, state by state.

The USA gun lobby, The National Rifle Association (NRA), gives millions of dollars to politicians so they don't pass meaningful gun control legislation, even as communities continue to be torn apart by mass shootings and society debates the same, tired talking points. And even though the majority of Americans support gun control, these NRA-backed politicians continue to do nothing. But after the latest mass shooting at a high school in Parkland, Florida, the survivors spoke up to demand change. They organized the March For Our Lives rally which attracted millions and started a movement. And for the first time, the backlash felt less like a routine, but a foundation for real progress. Building off the success of the March, they created the March For Our Lives (MFOL) organization and action fund to continue to push politicians to pass gun control. We were tasked with creating a symbol for the movement—one powerful enough to shift the imbalance of power away from greedy gun manufacturers, the influential gun lobby, and cash-aided politicians, and back to the citizens of the United States who deserve to live without fear.

We wanted every American voter to understand the price elected officials put on lives by accepting campaign donations from the NRA. The social media posts spread the price tags far and wide, and coverage in the media helped the message reach the masses—divided by a hyper-partisan, stale gun debate. With March For Our Lives organizers making their way across the country, the price tags have became the de facto symbol and communication tool for the message of gun reform at marches, demonstrations and campaign events in states where the NRA spends money. Since the march in Washington and around the United States in response to the shooting in Parkland, Florida, the message of the price tags has helped pass stricter gun control legislation—including background checks, minimum age of purchases, and the ban of high-capacity guns—in 26 states and counting. Beyond actual legislation, the messaging will continued to be used in campaign platforms as the country gears up for midterm elections in November.

Video for Price on Our Lives 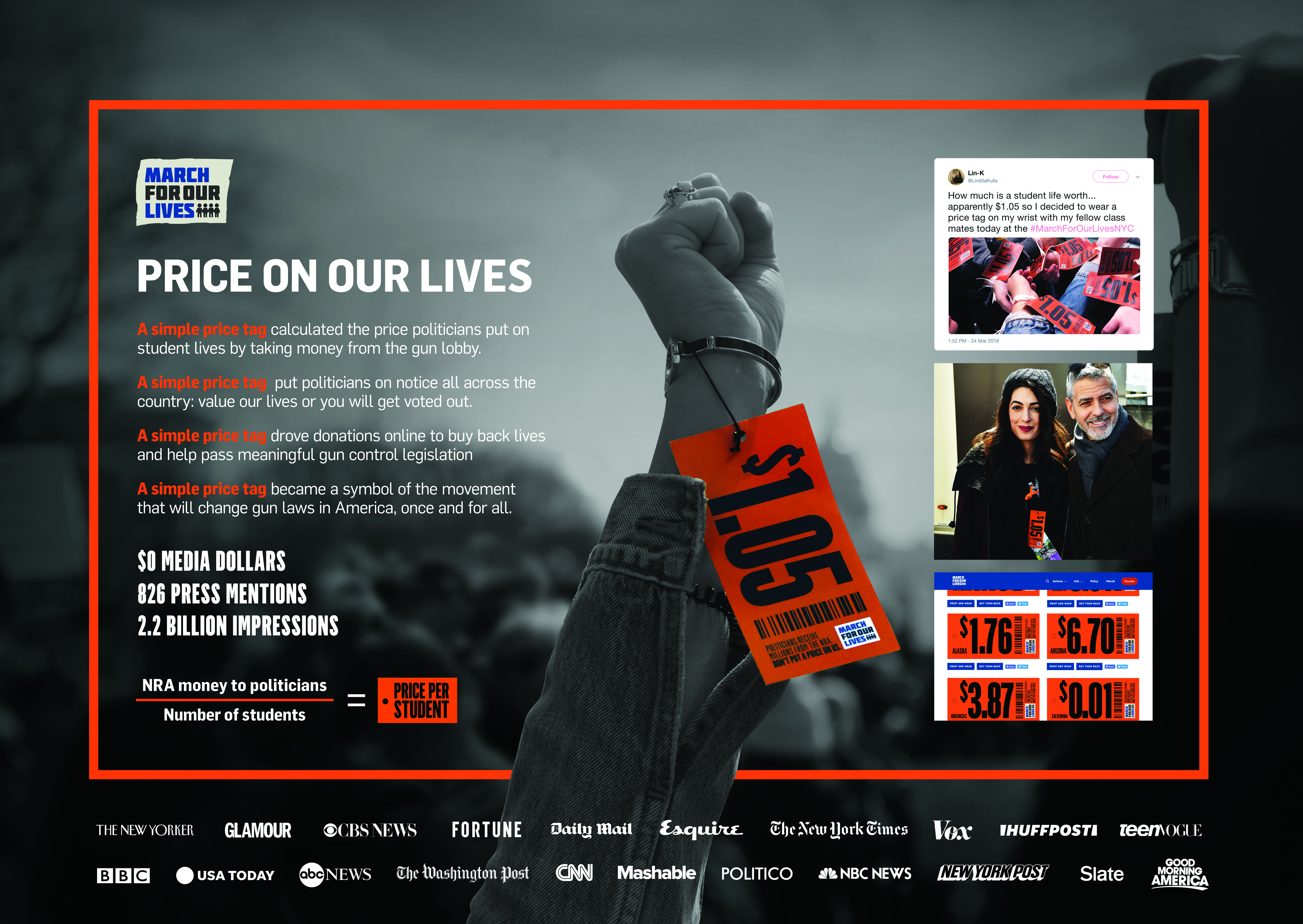