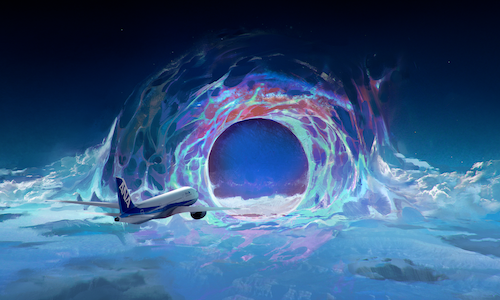 Seat 14C is, at its core, an earnest exploration of our possible future through science fiction storytelling. The objective is simple; to crowdsource an optimistic and exciting future for mankind. How will technology and culture interact in the year 2037? How has emerging (or not-yet-invented) technology altered society for the better?

Technology is becoming exponential. What once took 10 years to develop may now take half that or less. In 20 years, these imagined future states could be reality, so we asked those who will live to see the changes to imagine them.

Science-fiction has always been a source of inspiration for innovators, inventors and technologists. So, who better to envision the future of mankind than science-fiction storytellers? We commissioned 31 members of our Science Fiction Advisory Council – an assembly of 78 of the world's top sci-fi authors and creatives – to write stories from the future, told through the passengers on a fictional, time-traveling flight from Tokyo to San Francisco: ANA Flight 008.

Not only are they some of the best storytellers out there, but many of these authors come from hard science backgrounds. They hold masters degrees and doctorates in fields like physics, chemistry, space, and robotics; they have the knowledge to back their forward-thinking ideas.

It's common for science-fiction works to deal in dystopian futures. Our challenge was to envision a future that goes against that grain. Taking the position of techno-optimism offers an alternative perspective in line with our belief that exponential technology will make long-term positive impact on humanity. We used storytelling to convey these potential changes through a more digestible medium. Change can be intimidating, especially today when developments happen with increasing rapidity. When experiencing technological change in a story, one has an easier time getting in touch with the positives that technology could bring.

Imagining the future we hope to create can be overwhelming, as it begs many questions about how to arrive there. To balance this, we used time travel to transport the passengers unwittingly into the future. This quick jump sets the imagination forward to where we want to be, effectively skipping the how do we get there? By considering the ideal future first, we can set lofty goals and birth audacious ideas. Then, we go back and ask, "How can we accomplish this?" After careful deliberation, we decided 2037 is distant enough to allow for amazing tech advancements, but near enough that people can conceivably imagine it in their lifetimes.

Armed with 30 original short stories (each paired with original artwork), we built an interactive website designed around the seat map of ANA Flight 008. An animated intro video helps tell the story of Flight 008's mysterious time travel as it lands at SFO in 2037. Clicking on a seat presents that passenger's story as they disembark and discover a world changed by technology and innovation. One seat was reserved for the crowd: Seat 14C, highlighted gold on the seat map, invited storytellers from all over the world to write their own visions of 2037 for a chance to win a $10,000 prize package, including a trip for two to Tokyo.

At launch on June 28, 2017, we published 22 stories. To maintain engagement, we planned the incremental release of the remaining works over the course of 8 weeks. Adding a new story each week kept regular visitors coming back, and drew new readers and writers to the site until the closing date of our public contest on August 25.

The launch of Seat 14C was met with excitement from top media outlets such as WIRED, IFL Science, Futurism, Ars Technica, Geekwire, and more. Writers around the world expressed their excitement for Seat 14C on social media, and storytelling communities promoted the opportunity to their writers as well. To-date, our site has experienced well over 300,000 page views, and garnered 127,165,212 impressions on social media.

We asked writers from all over the world to imagine their vision of the future, encouraging them to be innovative and bold in telling the story of the future. We received over 1,300 submissions from writers in 74 different countries.

The stories we received are told from a variety of perspective, suggest novel new technologies, and demonstrate the potential for future social-cultural shifts. These concepts contribute to a compelling and inspiring vision of what's to come for humanity. 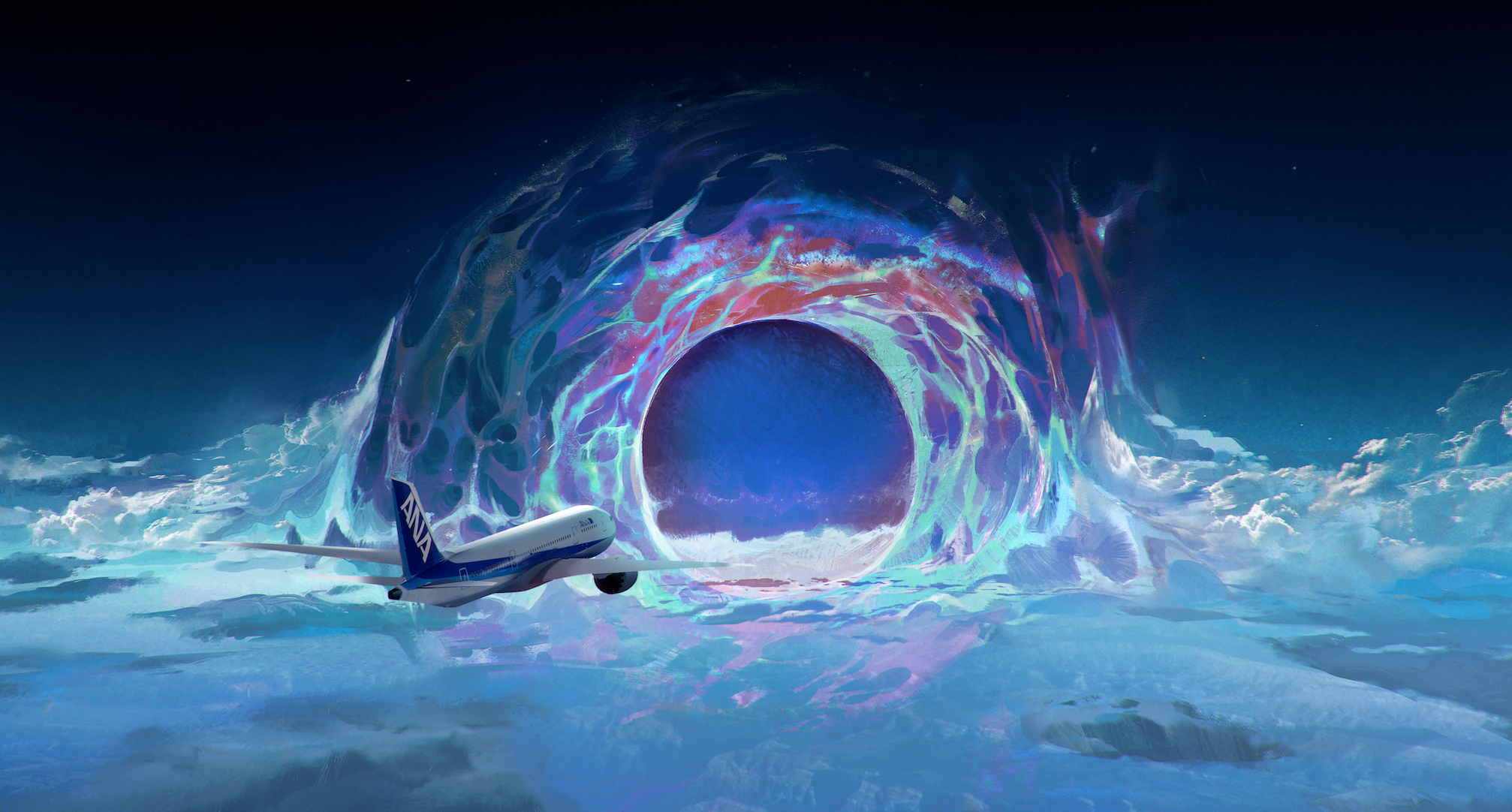 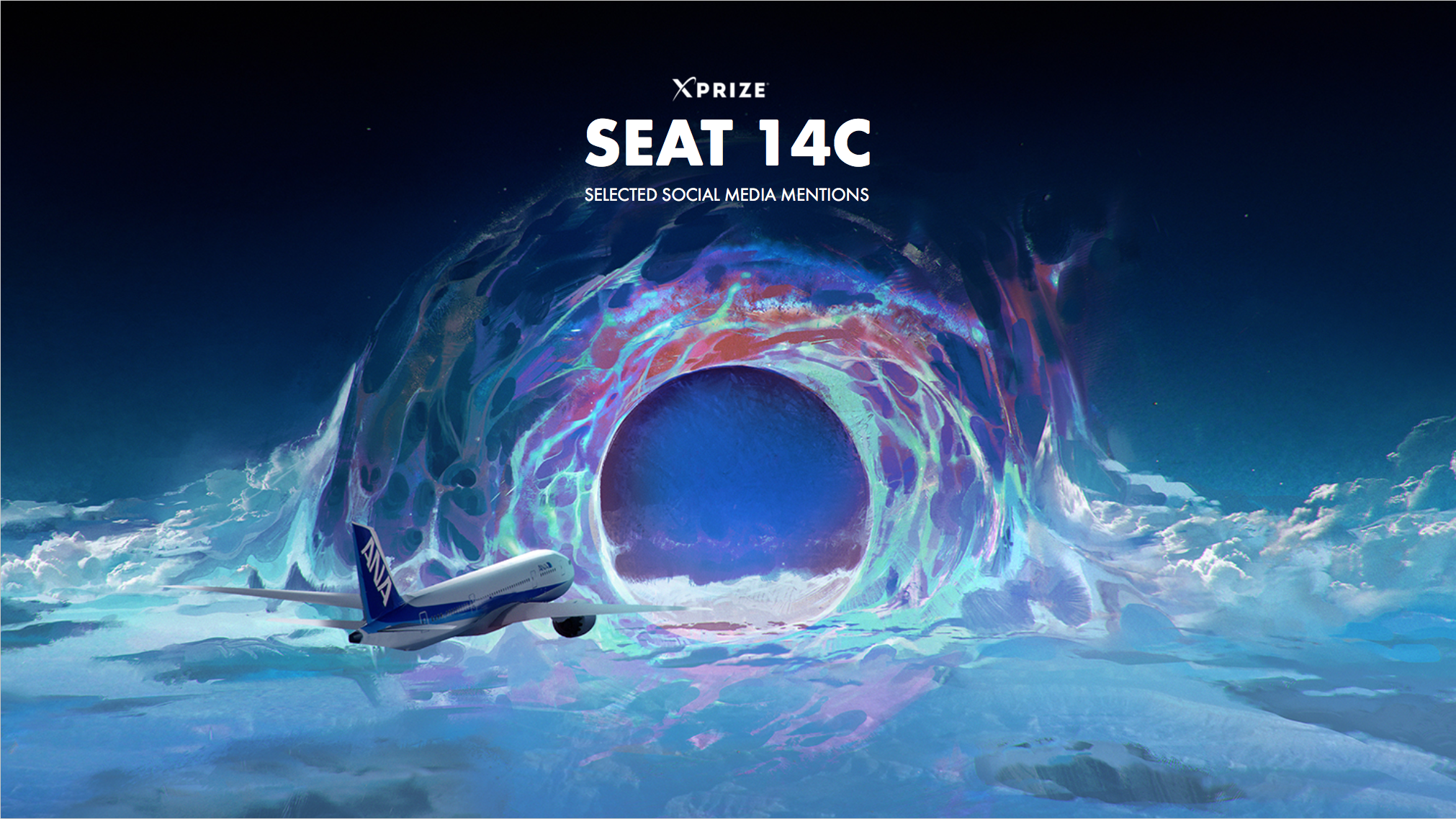 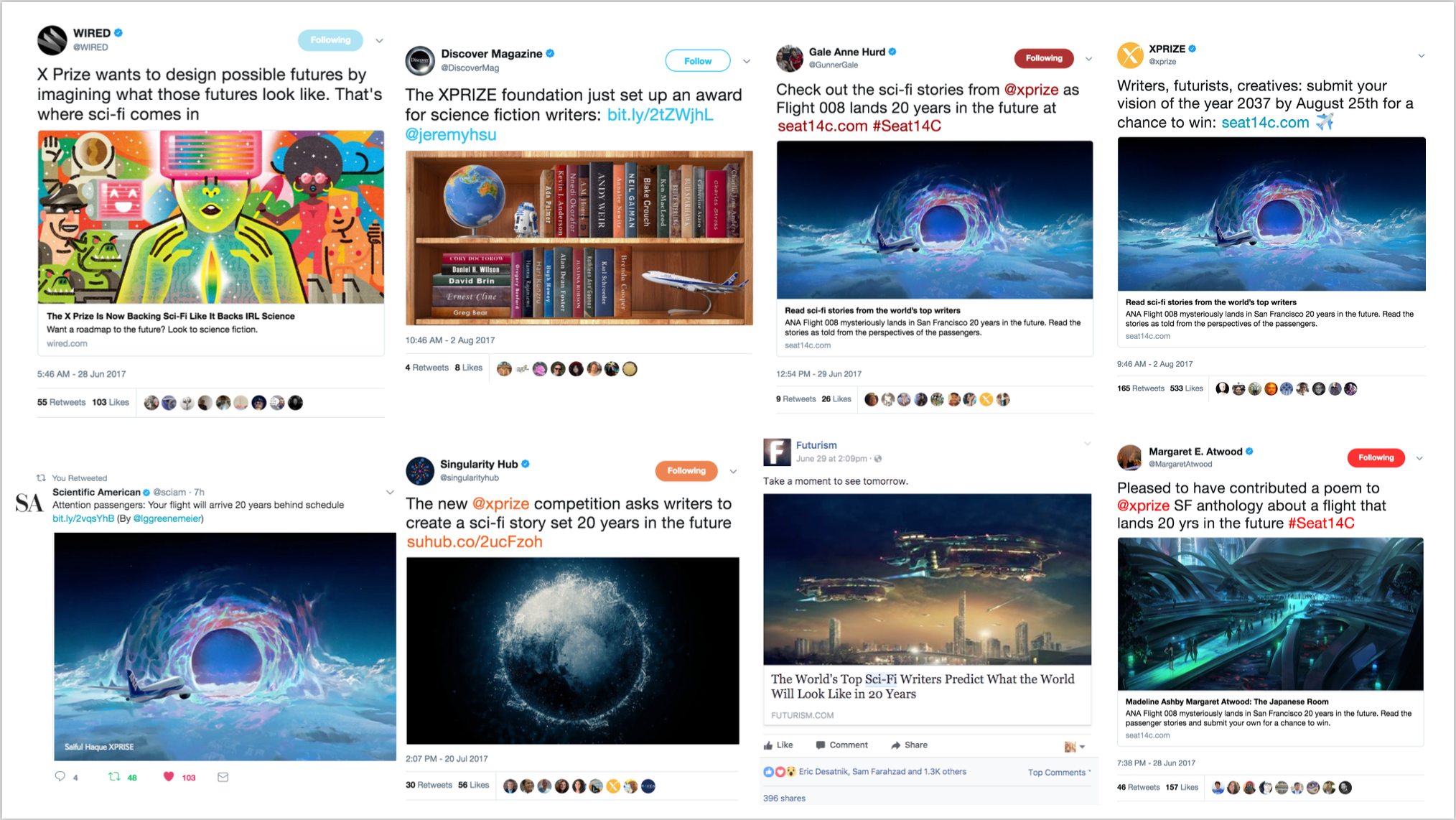 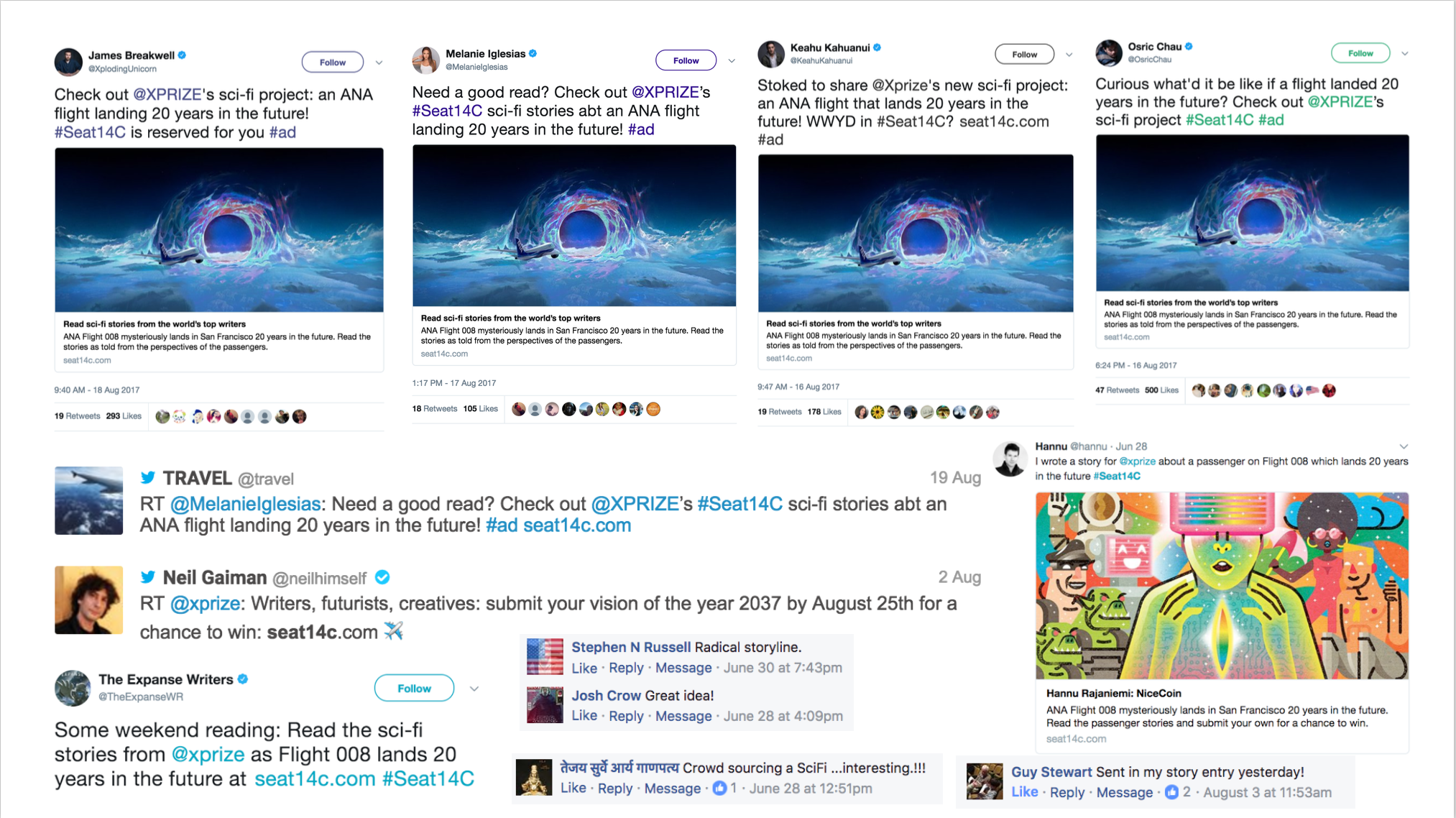 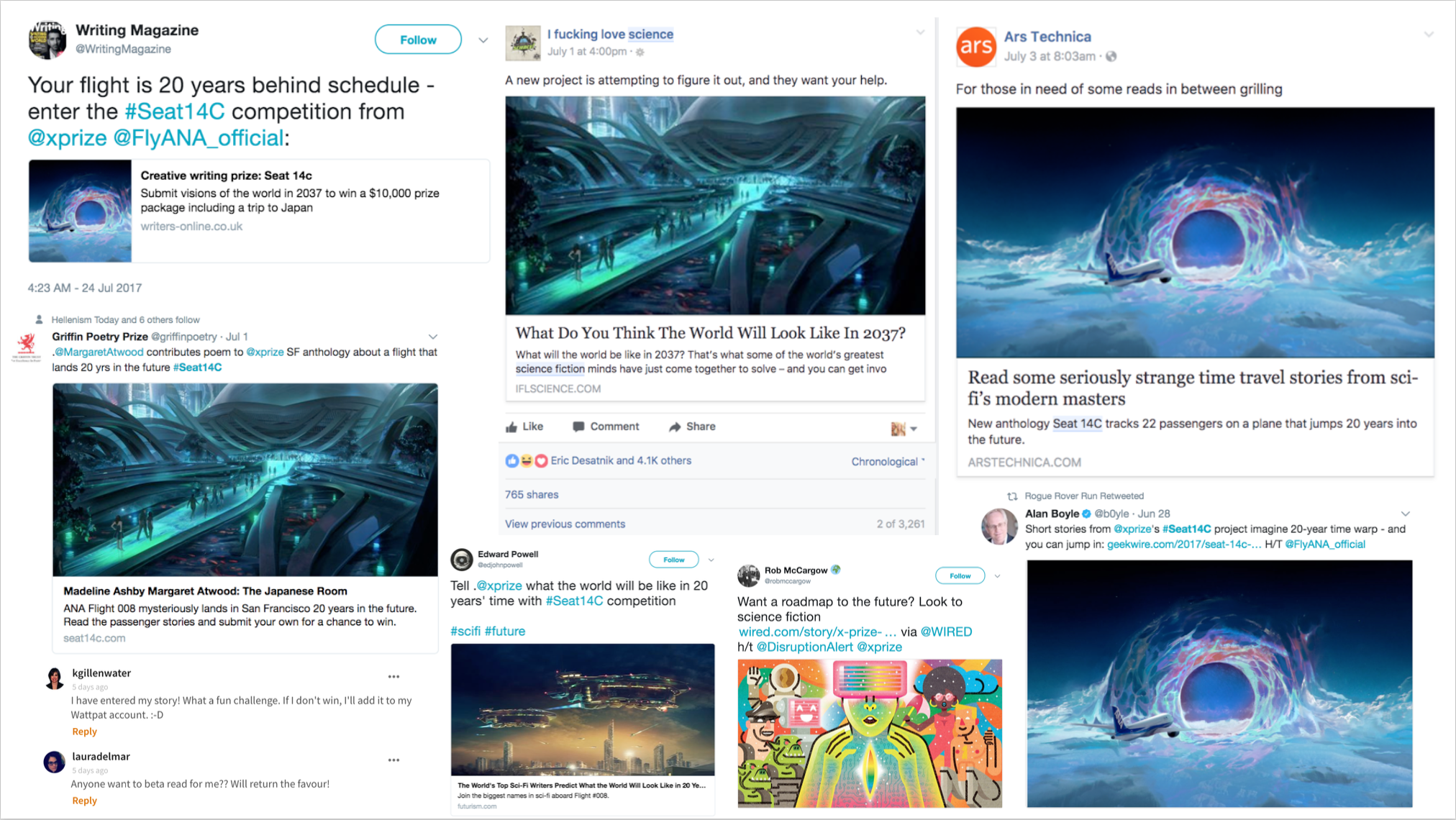 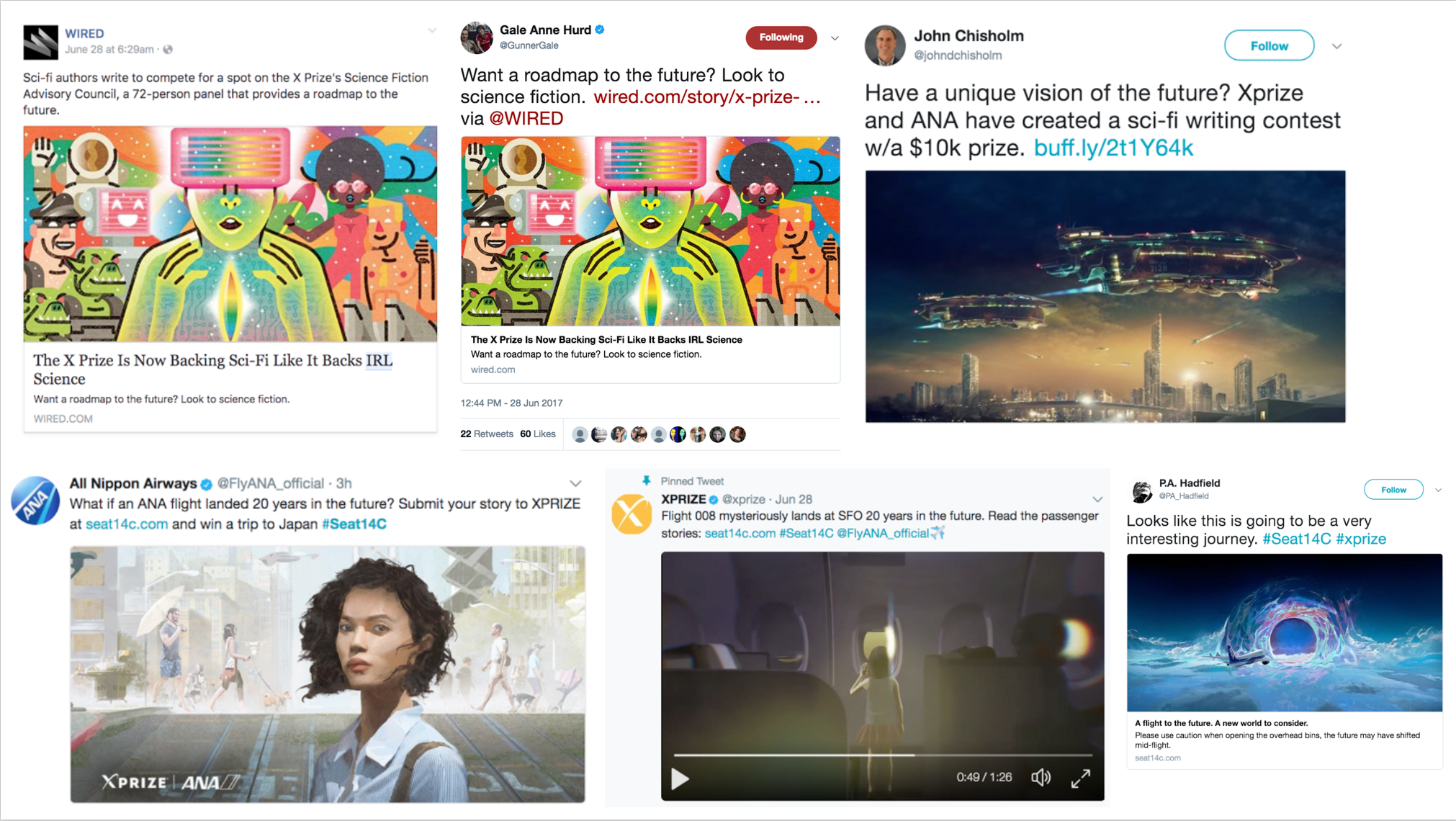