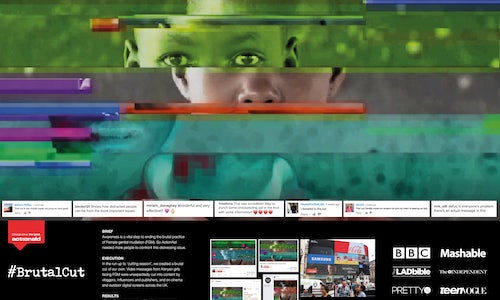 Gold Distinction in Pro Bono, On a Shoestring

Three million girls in Africa aged 4-12 are at risk of female genital mutilation (FGM) each year.

This brutal tradition can cause severe bleeding, infertility and even death, and can have devastating psychological and social consequences. After FGM, girls are often taken out of school and forced into early marriage.

International charity ActionAid is working in 10 African countries to end the practice. It campaigns, supports and educates to help communities say no to FGM. While awareness of FGM is increasing, there is low awareness of the horrifying effects it can have on girls' lives.

ActionAid believes awareness is the first step to ending it. So the objective was to generate conversation and greater understanding among the UK population, with a target reach of 400,000. This would give ActionAid a credible voice for fundraising around the issue, and help to end FGM, for good.

With an extremely modest budget (under £20k), we needed a disruptive idea that would generate conversation: one that was bold enough to break free of channels and become news and social currency.

The local shorthand in Kenya – referring to FGM as "the cut" – inspired the idea.

The message would come without explanation or warning. Just like the FGM cut, its use would be sudden, unforgiving, and brutal.

#BrutalCut was kicked off through social influencers, but it was an idea that could live on any channel and enable anyone to join in by making the cut to their own content in solidarity for the cause, sparking conversation and further social sharing.

We initially focused the campaign on millennial communities online. This is the generation that can help end FGM –an audience of active sharers who can spread the issue to a wide audience.

While FGM is not a subject this audience readily confronts, they do spend plenty of time watching social videos and vlogger content. So to get the ball rolling, we approached influential video creators and publishers to edit the #BrutalCut clip into their video content, without explanation to their fans.

We visited a school in Kenya to film the 10-second #BrutalCut video clip.

Then without warning on 28 July, the message interrupted vlogger videos, content from digital publishers, celebrity posts, cinema ads, festival screens and outdoor digital ads to deliver the message: "This cut might be irritating, but some cuts are life-destroying".

The video linked to brutalcut.org where visitors could use a web app to edit a brutal cut into their own selfies and share on social media. The website also features a short documentary explaining the broader context and why ActionAid is building safe centres for girls fleeing FGM in Kenya.

#BrutalCut also interrupted two screens at the Latitude festival in July, and cinema trailers at the London Rooftop Film Clubs. And at noon on launch day, 132 digital screens across the UK were cut, including London's iconic One Piccadilly, in the first-ever synchronised disruption of outdoor media.

The campaign inspired 24 celebrities and high-profile vloggers along with major online publishers such as LadBible and Pretty 52 to cut their social content, share the campaign video or post support.

Despite the minimal budget, what started life as a 10-second videoshared by social influencers exploded to become social and newscurrency, covered by the Independent, Teen Vogue, BBC AsianNetwork and Mashable.

The campaign recently helped ActionAid secure £250,000 in funding from players of People's Postcode Lottery to build community safe centres to protect Kenyan girls. This funding was recently raised up to £2.6 million. This unprecedented level of funding has enabled ActionAid to build a community safe centre to protect Kenyan girls from FGM - as well as support other anti-violence initiatives for women and girls around the world. 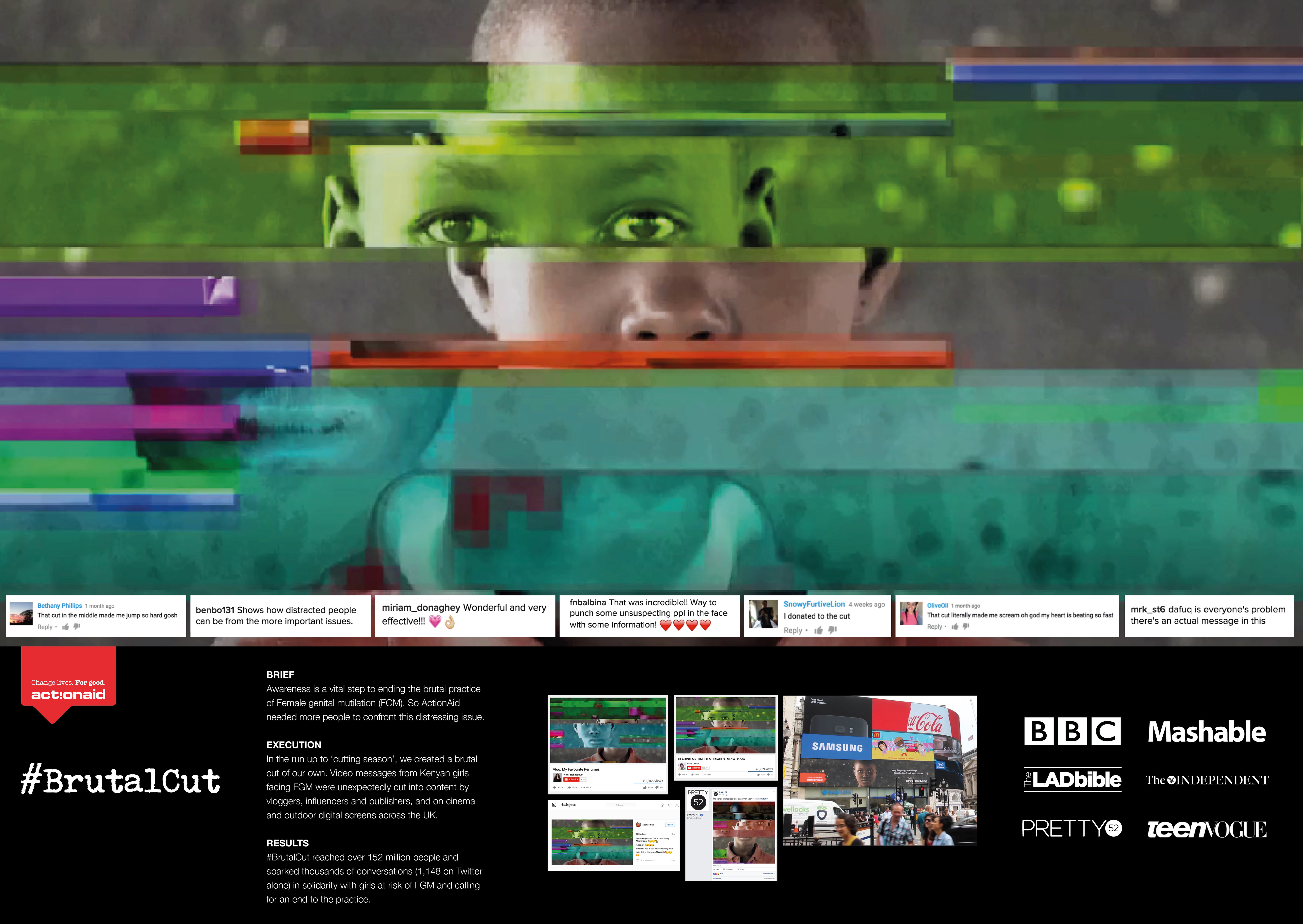