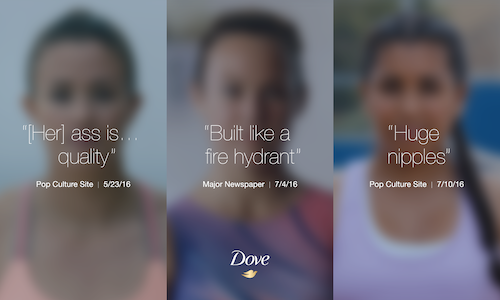 “Hot blonde.” “Huge nipples.” “Her ass is quality.”
Somehow it’s become acceptable for the media to judge women by their appearance instead of their accomplishments. And elite athletes are no exception. When women compete at the largest sporting events in the world, commentators from television, radio and print focus on how they look instead of what they can do.

This year Dove wanted to change the story for female athletes and women everywhere. But in a market saturated with empowerment messages, we knew we’d have to do more than speak up to break through.

So we decided to do something far more challenging and far more important – confront media sexism head on with direct, powerful action. We’d give everyone the power to take on media outlets that produce distracting, destructive and disgusting comments about female athletes. We’d do it when the whole world is watching, 24/7 in real-time. And we’d do it using the most damning content of all – the media’s own words.

“Dear Media, when you only see a female athlete’s looks, you don’t see her at all.”
Throughout the summer of 2016, that message appeared alongside raw, uncensored media quotes about female athletes on live digital billboards in New York, Los Angeles, and Toronto. As the quotes appear, images of female athletes disappear behind them. Our message to the media was clear: we see what you’re doing, it needs to change, and we’re doing something about it.

The media commentary was fed to the billboards by a content hub on Dove.com. The site hosted hundreds of sexist quotes about female athletes gathered in real-time – all day, everyday – by an AI system scanning TV, radio, and print publications around the world.

Every one of these quotes engaged users to take direct action. By clicking on a quote, users instantly Tweeted the comment directly back at the company that said it with the hashtag #MyBeautyMySay and a personal message that these judgments are not okay. Users also shared real-time data about which aspects of female athletes’ appearance were currently being discussed, including hair, clothing, age, body, and sex appeal.

On social media, we fueled the conversation with real-time updates of the most outrageous quotes and data. World champion gymnast Shawn Johnson used her authentic voice to show exactly what’s at stake for young athletes struggling to come to terms with media comments about their appearance. Together, we rallied a social media movement that reminded the media that our collective voice has real power and set the bar higher for how we talk about female athletes.

“Dear Media” not only anticipated the heated conversation about sexist coverage that summer, but led the way. Users shared 97% percent of the quotes we discovered, generating more than 40,000 Tweets and turning #MyBeautyMySay into a globally trending hashtag that reached an audience of more than 321 million. The campaign also gathered more than 1.2 billion earned media impressions. Even global influencer and feminist superstar Emma Watson Tweeted her love of the campaign.

In the summer of 2016, Dove turned the cozy relationship between advertisers and the media on its head, setting a new standard for how we talk about female athletes and showing the world that brands can create real change when they stop playing by the rules. 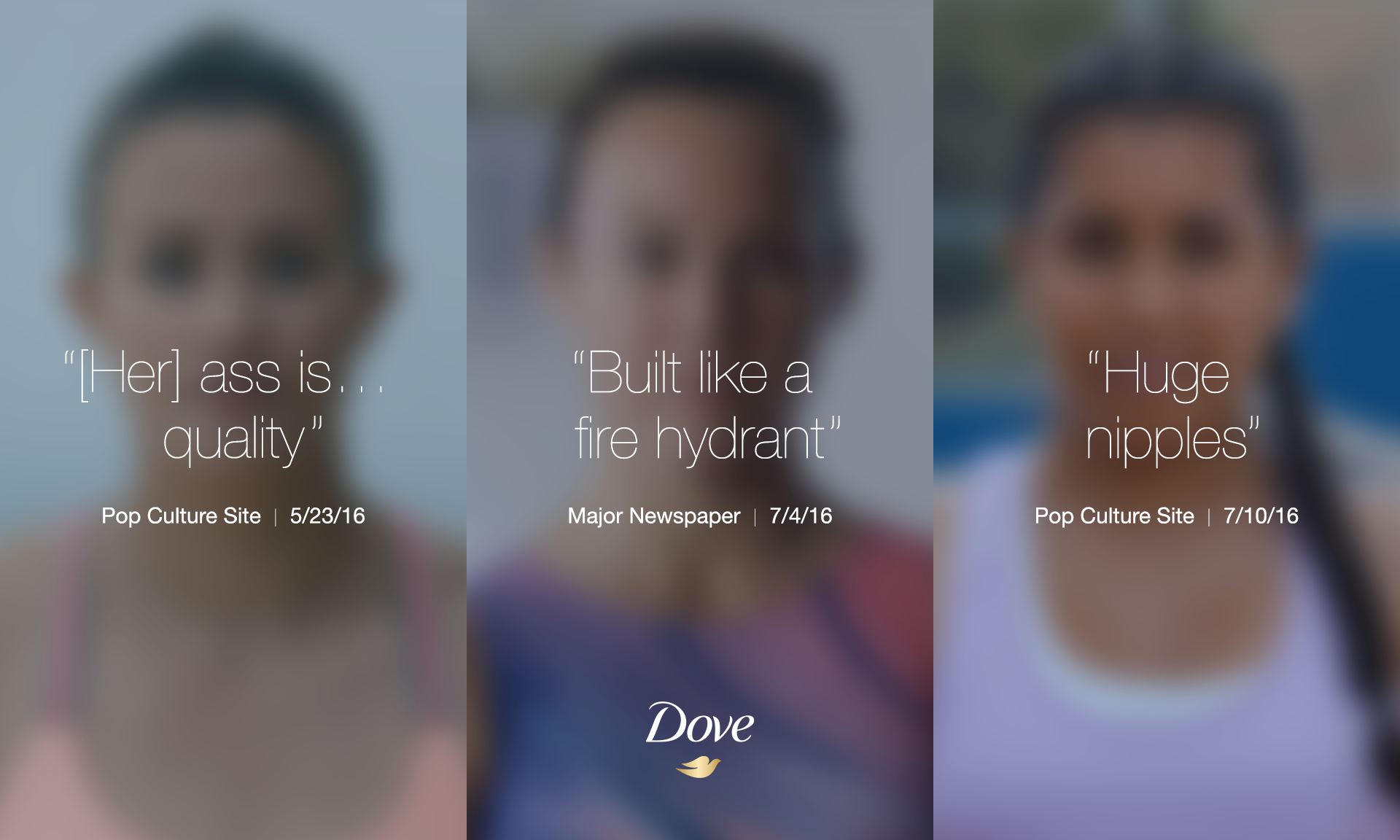 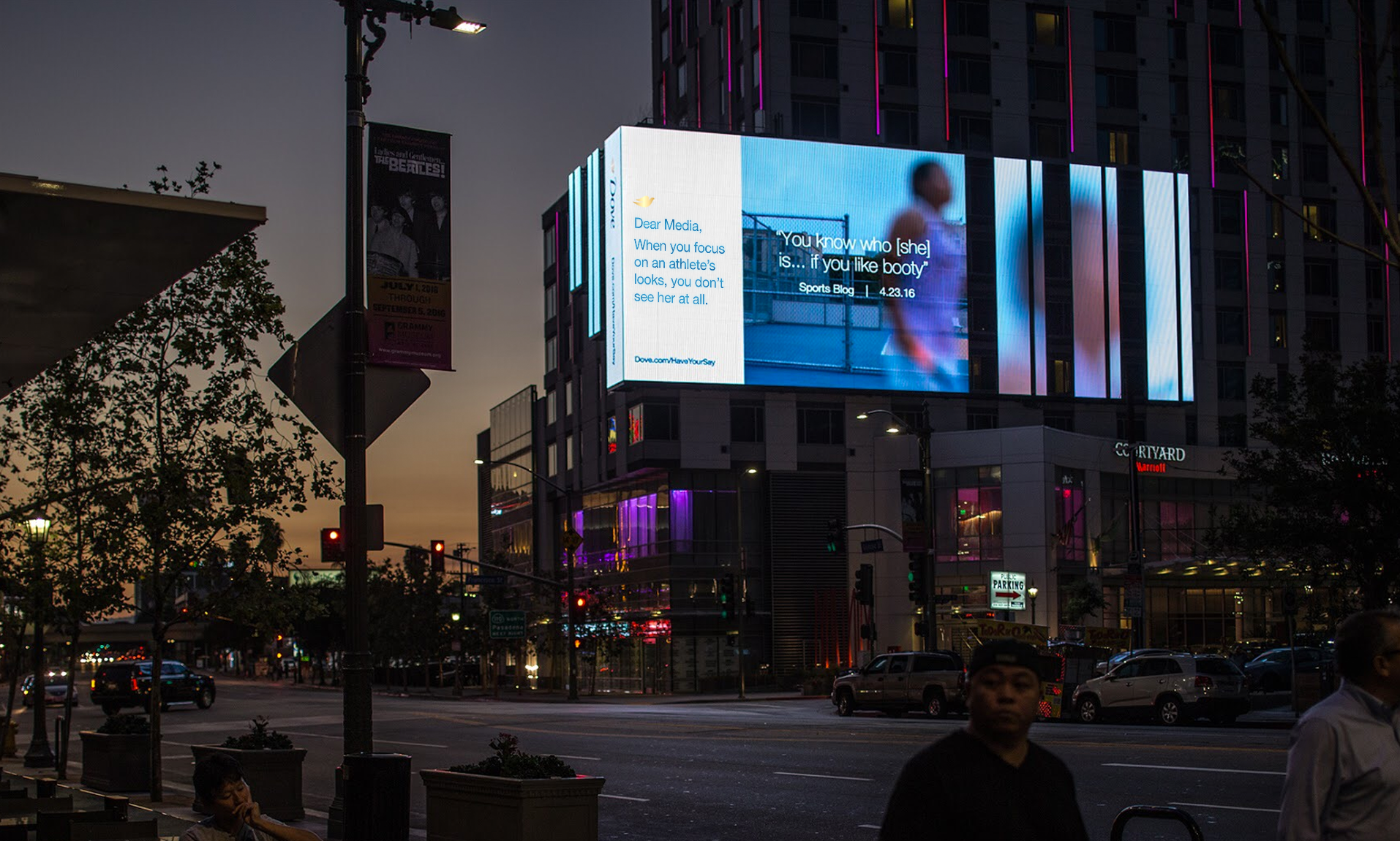 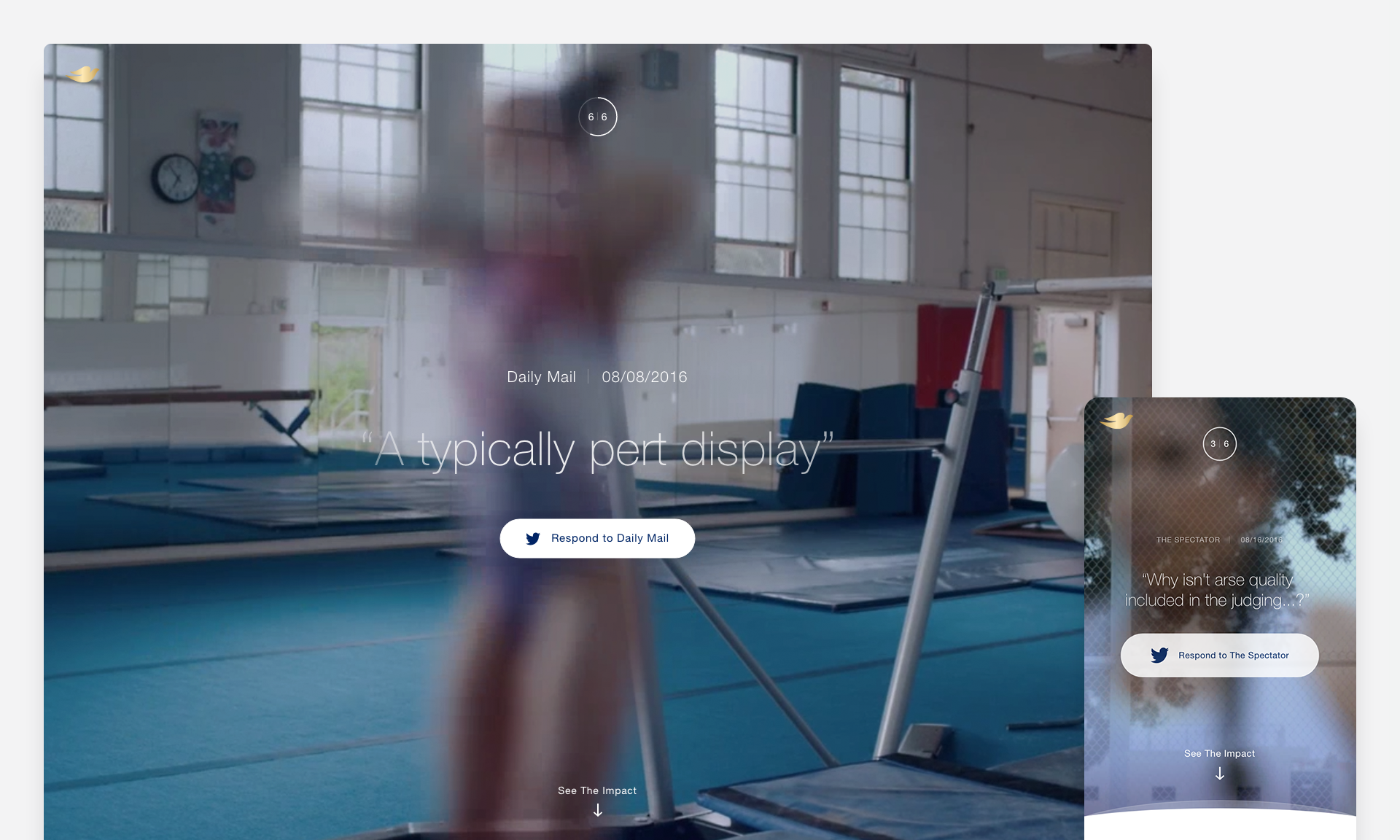 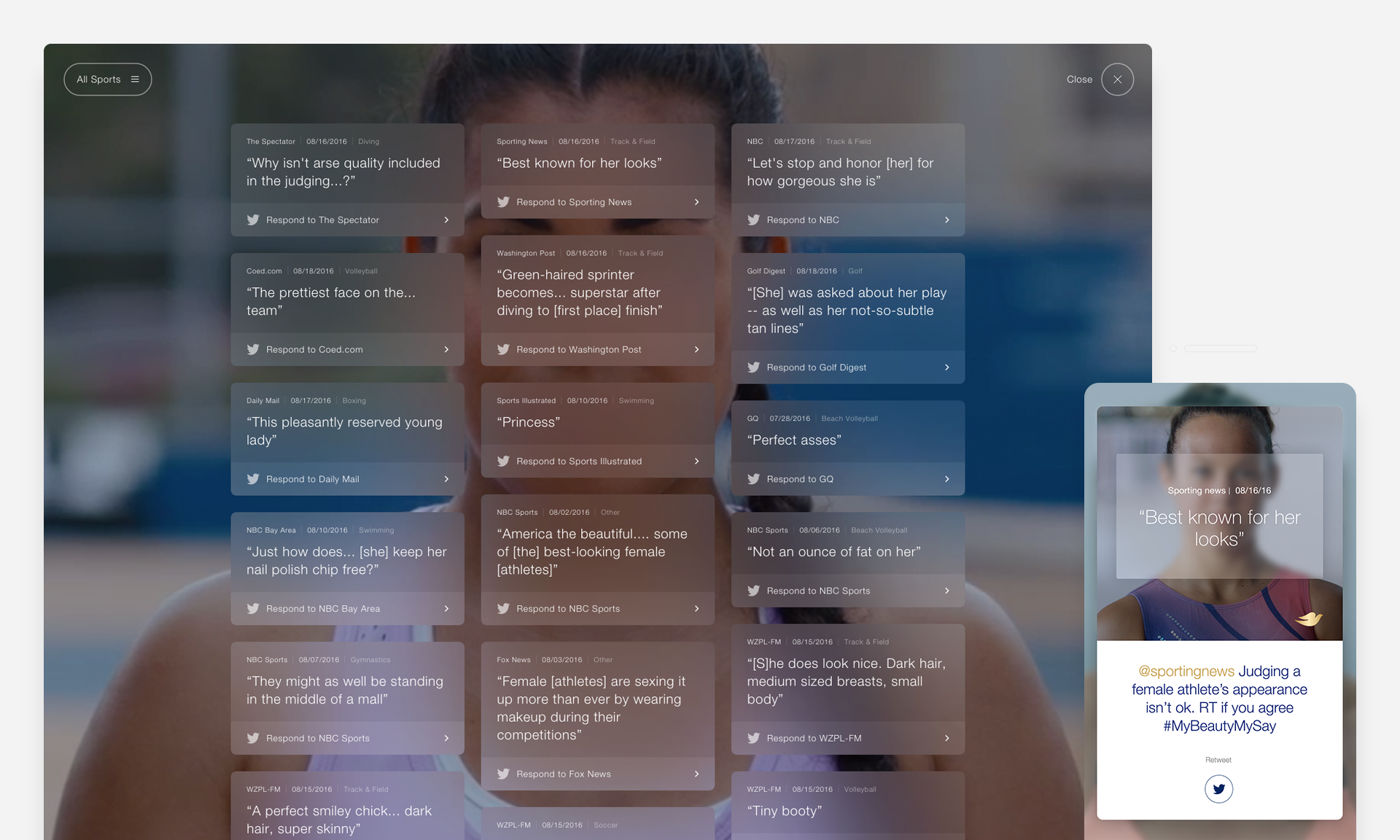 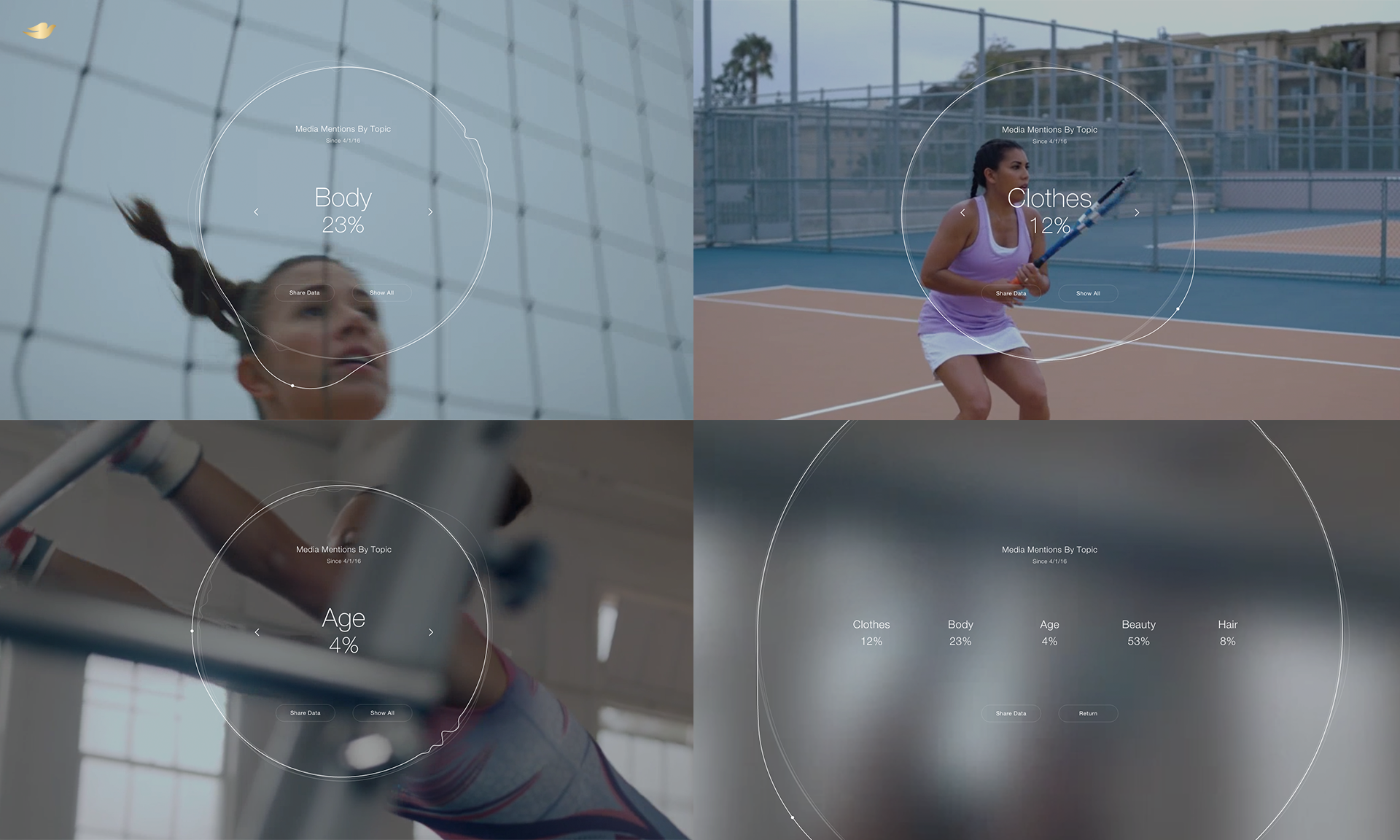