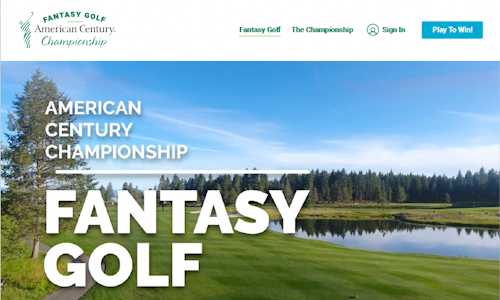 Finalist in Contest or Promotion, Integration with Live Television

American Century Investments is a global asset manager serving investors like you and me, financial advisors, and institutions.

Unlike many competitors, we are privately owned, and we enjoy the industry’s most unique ownership structure. Our controlling owner is the Stowers Institute for Medical Research, an organization established and endowed by our founder 25 years ago. Every year, over 40% of our profits support the diagnosis, treatment, and prevention of disease—over $1.7B to date. The Institute directly benefits from our success: Any initiative we pursue that positively impacts our brand is a win for the fight against diseases that affect so many, such as cancer.

For 23 years, we’ve been the title sponsor of the American Century Championship (ACC), a premier celebrity charity golf tournament. In the past, we’ve leveraged it to build advisor client relationships, and for philanthropic purposes. This year, given COVID-19, we decided against hosting clients just three months before event launch – forcing us to approach our biggest annual marketing investment totally differently.

The approach? Create a social-first idea to drive broad awareness, interest, and participation – beyond our clients to the national investor universe – in the tournament OFF the course.

We knew NBC—event owner and broadcaster—would do its part. But for our brand to gain more ground, we needed an activation beyond standard media coverage. One that would feed on itself to drive as much buzz as possible. We set out to beat YOY brand engagement goals by at least 20%.

In March 2021, we decided against hosting clients at the ACC; COVID-19 was too unpredictable. At that point, we were a year into a pandemic that put a drag on so many aspects of life. This star-studded tournament is the definition of an antidote.

The ACC is one of the most entertaining national sports events of the year. While serious about the purse and charitable donations, its unique energy strips golf of its stuffiness. Celebrities of all kinds compete in a sport for which almost none is famous. Some are quite good; others, not so much. But they all dance, sing, joke and laugh for 72 holes. It dawned on us: This is precisely the medicine Americans needed.

Everyone could watch the tournament, but what if we gave them a chance to participate? We challenged our internal teams to create a social-first idea to drive awareness, interest, and participation in the ACC off the course. Our mission was to help take their minds off the real world, if even for a few days.

Fantasy sports are all the rage. Once reserved for diehard sports enthusiasts, this pastime has made its way into the mainstream over the past few years, given its accessibility. We’ve all heard of Fantasy Baseball and Fantasy Football. It turns out, Fantasy Golf is a thing too, though it was still reserved for diehard golf fans.

But what about Fantasy Golf with names like Steph Curry, Tony Romo, Rob Riggle and Justin Timberlake? With a chance to win a free trip to next year’s live tournament to see celebrities up close and personal, and $10K to the charity of your choice? It doesn’t get more mainstream than that!

#ACCFantasyGolf was born. It was an activation anyone, golf enthusiast or not, could get excited about.

We quickly engaged an outside partner to design and built an interactive microsite to activate Fantasy Golf. We divided the 88 celebrity golfers into five ranked groups; fantasy players built teams choosing one golfer from each, quickly discovering the challenge almost as difficult as building an investment portfolio. That was our opportunity to promote our One Choice® Target Date Portfolios where professionals do the choosing!

Leveraging past tournament footage, we invited fans to the site through 10 social videos celebrating the event’s impressive roster—each one carrying a unique theme specific to the featured celebrities. We kept the buzz going throughout the tournament by shooting (and editing in real time!) 15 on-site interviews with celebrities playfully chastising fans who hadn’t picked them. These videos ran across our paid and organic channels, including Twitter, LinkedIn, Facebook, and Instagram. Over half of the celebrities voluntarily talked up #ACCFantasyGolf on their own social channels. Many of them also experienced the fun firsthand by participating in a celebrity-only Fantasy competition promoted on-site at the event.

Golf is a financial services cliché. But #ACCFantasyGolf turned golf on its head. Likewise, our Kansas City-based firm that directs over 40% of profits to medical research turns Wall Street on its head.

A phenomenal over 3,000 Fantasy teams were built in less than two weeks. But the real key to our success was the buzz the campaign generated. #ACCFantasyGolf contributed to the highest tournament rating since 2009 with 6.6M viewers, beating out Wimbledon and the PGA Tour that same weekend. And we’d thought our goal to increase engagement levels by 20% was aggressive, but we beat that goal handily! Engagement increased over 2020 with: 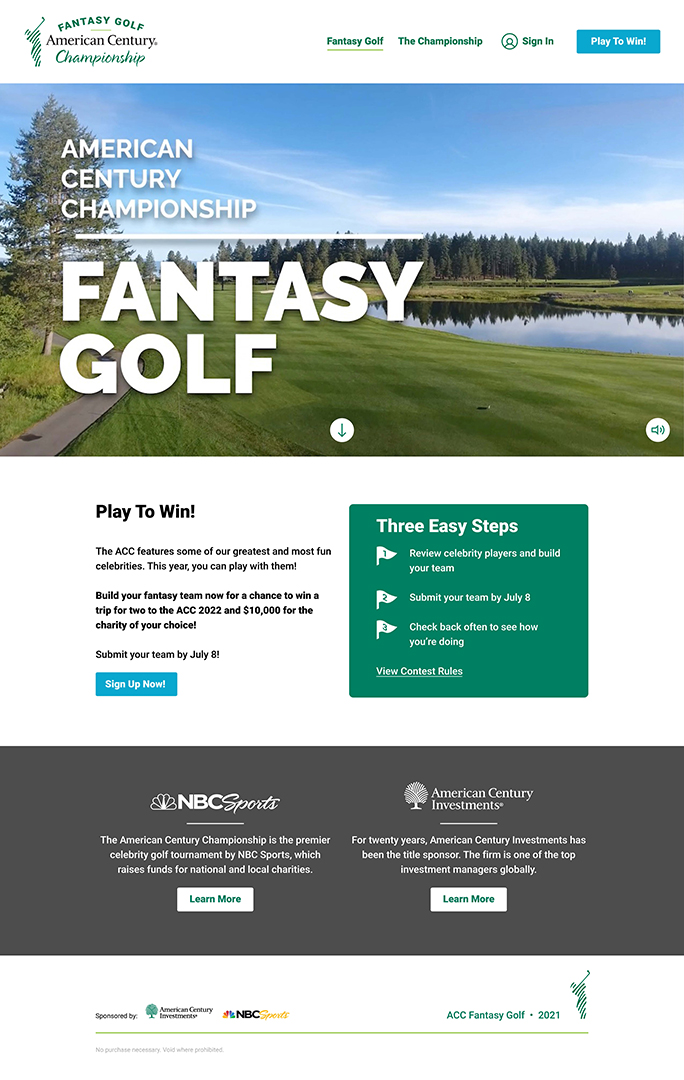 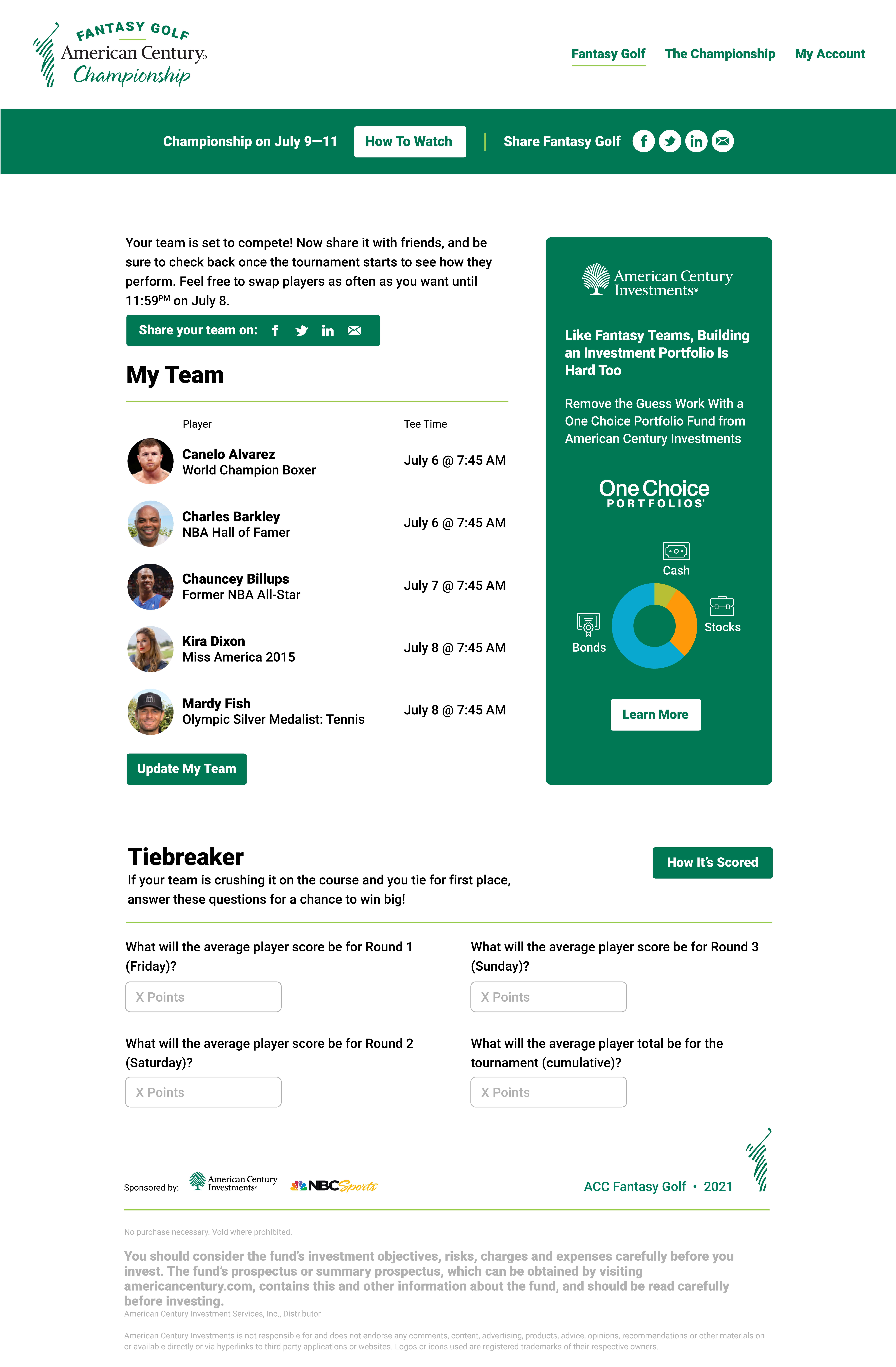 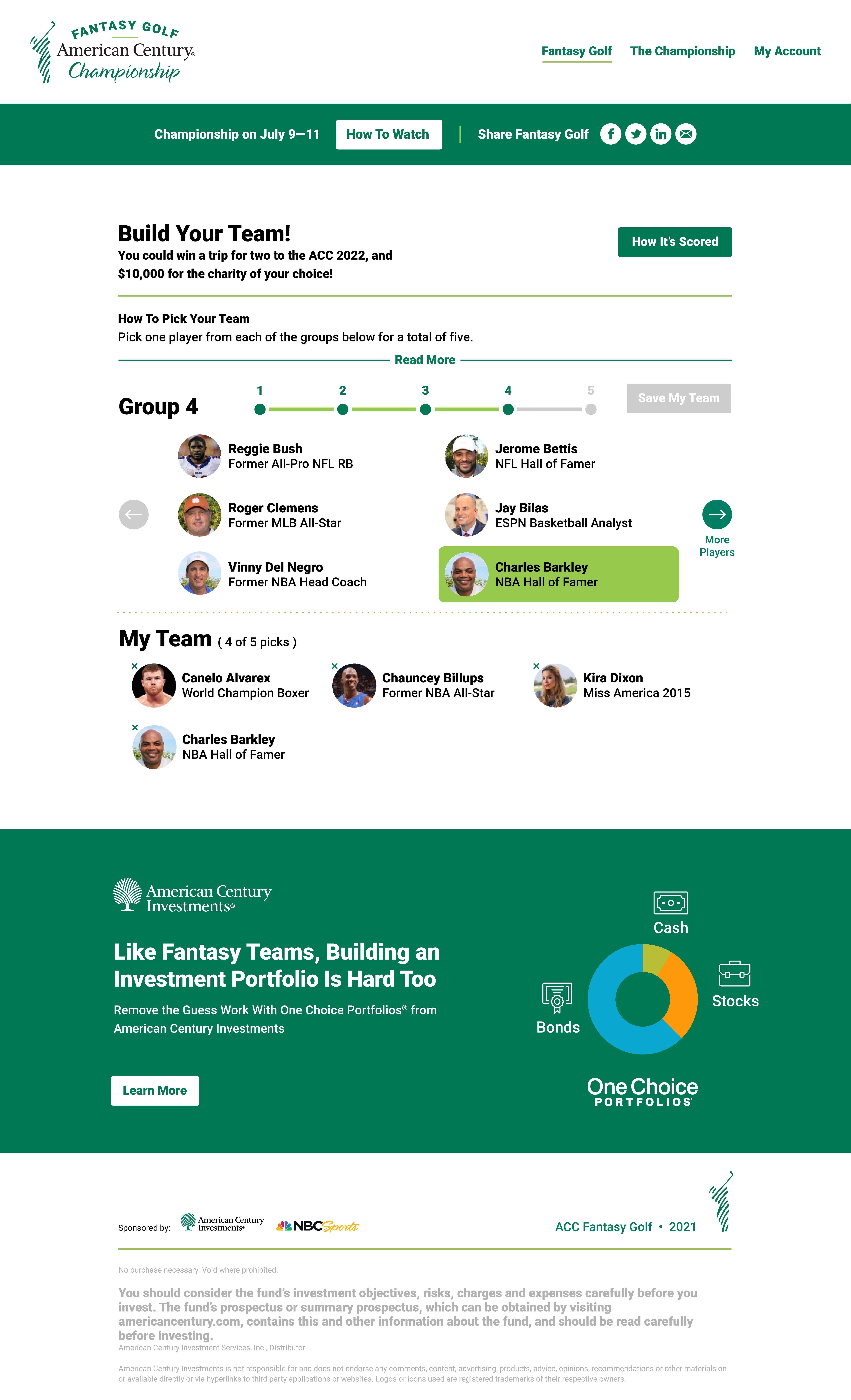 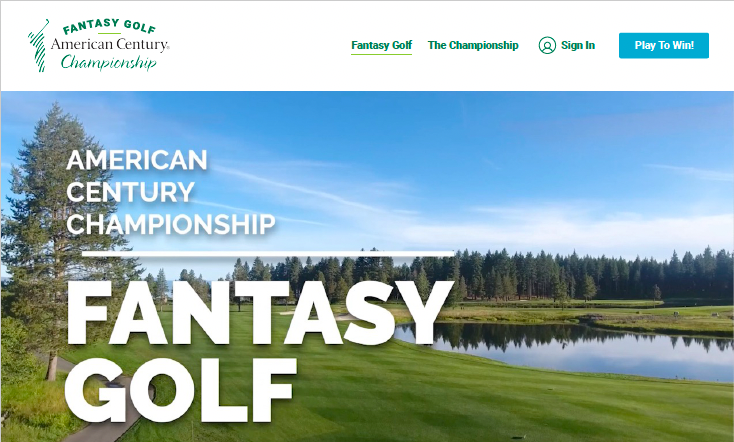 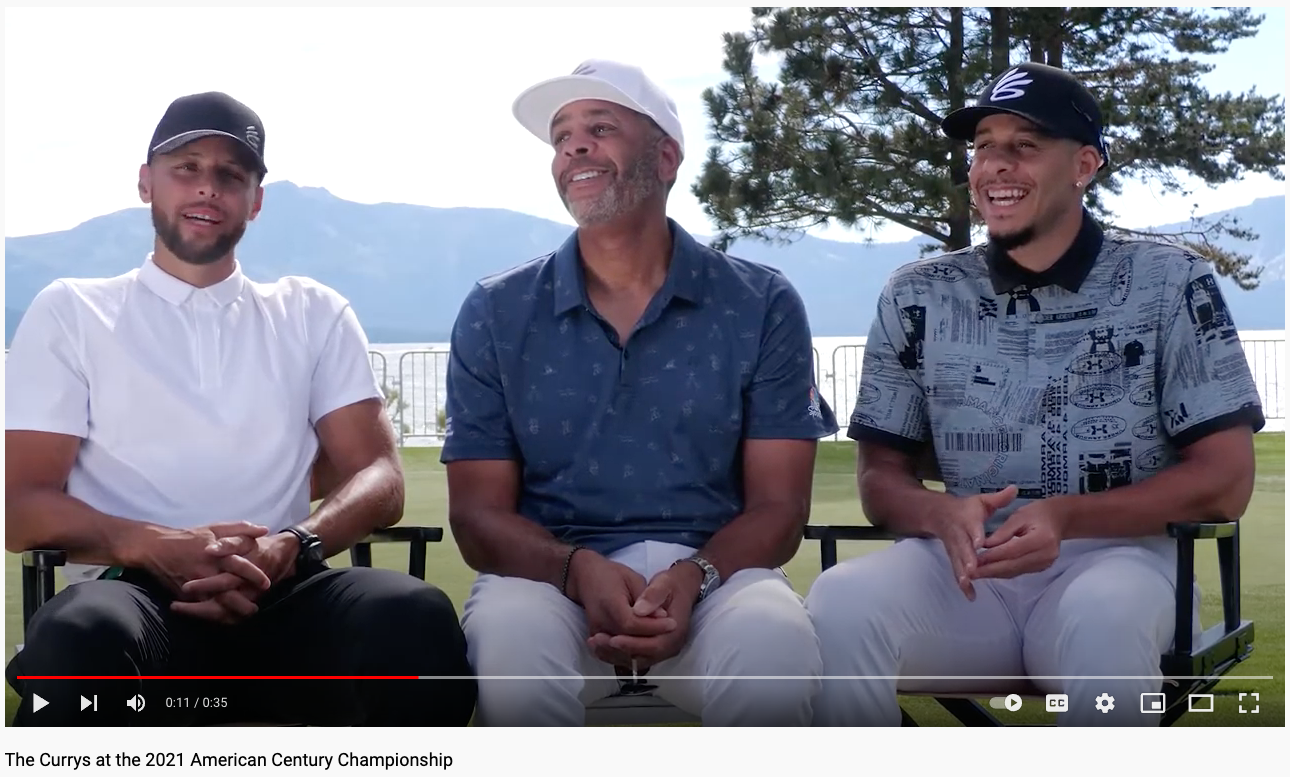 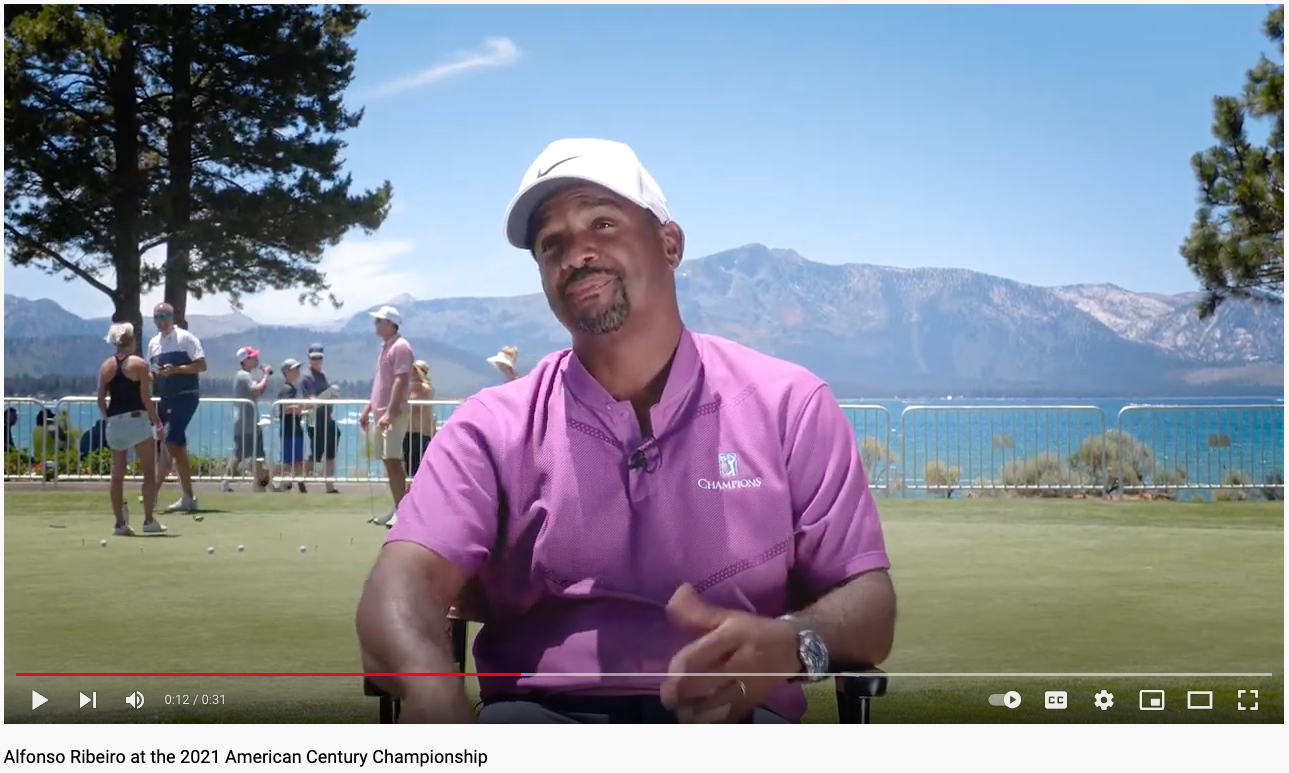 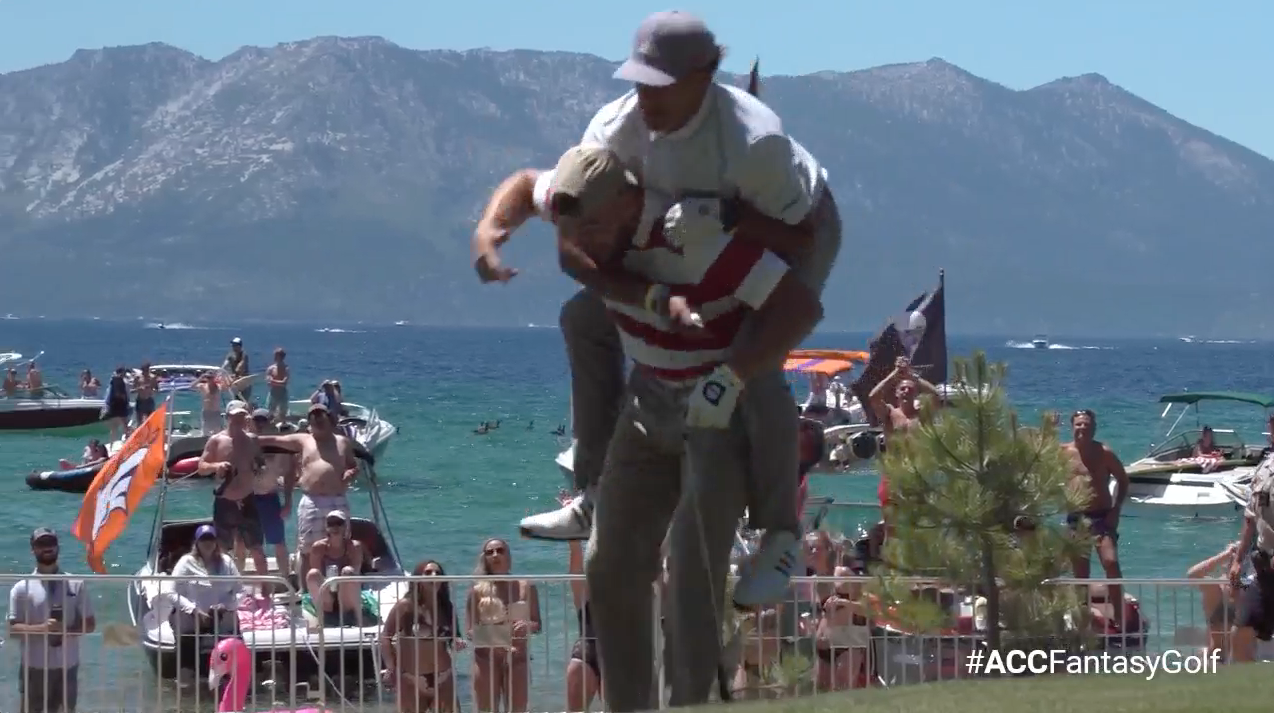 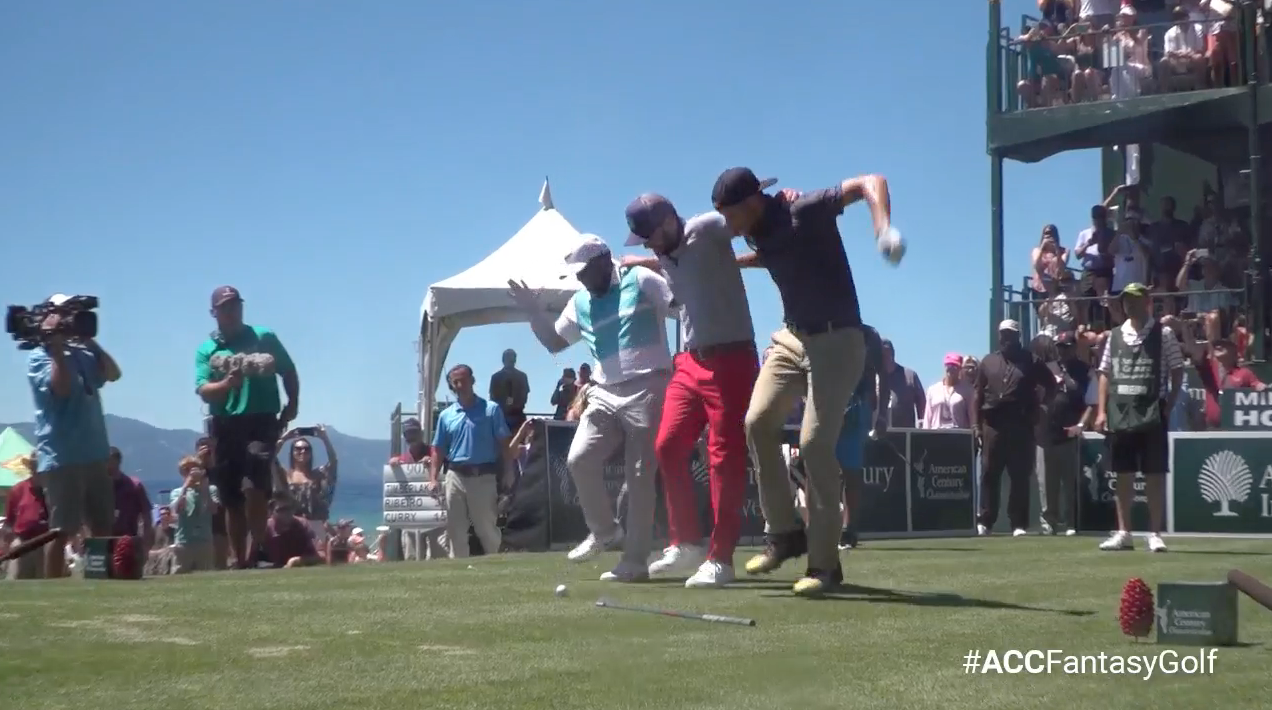