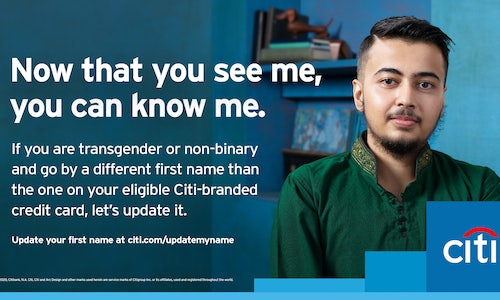 Now that you see me

What’s in a name? For some transgender and non-binary people, everything. According to the National Center for Transgender Equality, 68% of trans people don't have a single identity document that reflects their name. Why? Because if you’re trans or non-binary, legal name changes are difficult to say the least. Cost, court dates and discrimination are huge barriers.

In 2020, Citi partnered with Mastercard to become the first major bank to launch the True Name feature across the U.S. This functionality provided Citi’s trans and non-binary customers with the ability to use their self-identified chosen first name on eligible Branded credit cards and across customer service channels, including phone, online and mobile access points – without requiring a legal name change.

The primary communication objective of the campaign was to drive awareness of Citi’s new credit card functionality that empowers all trans and non-binary customers to update their first name on their eligible Branded credit cards and account profiles to match who they are. Additionally, the campaign aimed to build brand equity by positioning Citi as a steadfast champion of human rights and social progress.

Having a person’s self-identified chosen first name be accepted and recognized is a matter of true self-identity for transgender and non-binary people. It’s also one of access and safety. Beyond rolling out this new functionality on Citi's eligible Branded credit cards and accounts, the campaign’s aim was to raise awareness of the challenges faced by the trans community, embrace diversity and inclusion, and inspire trans allyship.

The campaign headline, “Now that you see me,” was born out of the insight that being yourself, and being acknowledged for it, is the beginning of everything; relationships, job opportunities, respect, equality and societal change.

In a society where 80% of Americans don’t believe they know a trans person, enabling the trans and non-binary community to be seen for who they truly are, is the beginning of everything. Becoming friends, being hired, pursuing dreams. Visibility is key to moving towards real inclusion.

This insight — that a name is a part of a person’s identity and impacts every area of their life — was central to the campaign promoting Citi's new offering, in which transgender and non-binary customers have the choice to update their account profiles and eligible Branded credit cards to match who they are across Citi’s customer service channels, including phone, online and mobile access points.

Having a person’s self-identified chosen first name be accepted and recognized is a matter of true self-identity for transgender and non-binary people. It’s also one of access and safety.

In November of 2020, Citi’s consumer campaign launched at the beginning of Transgender Awareness Week, unapologetically promoting visibility of the trans and non-binary community.

The 360-campaign encompassed print, broadcast, digital, an influencer partnership and out-of-home ads. Assets showcased photographs of a diverse group of trans and non-binary people with the bold headline "Now that you see me, you can meet the real me." A national broadcast spot launched on the Today Show, shot by cinematographer Bianca Cline and featuring actor Asha Doucet, both of whom are trans, in which a young Black trans man and his partner are in the process of finding a name that best reflects his true identity, before seeing the name come to life on an updated Citi card.

Trans and non-binary people were responsible for shaping the creative, both in front of and behind the camera. It was critical to care for representation and get it right, necessitating collaboration with Égalité, Publicis Groupe’s Business Resource Group (BRG) for LGBTQ+ professionals and their allies, along with consultation from GLAAD, one of the world’s largest lesbian, gay, bisexual, transgender and queer media advocacy organizations. The perspective and real-life stories offered by trans and non-binary colleagues was integral in shaping a compelling and authentic strategic approach, instrumental to the success of the campaign, and a step in the right direction in advocating for trans equality.

The campaign reflected Citi’s role as a committed ally to the trans and non-binary community, partnering with LGBTQ+ focused properties such as Pride Media and Buzzfeed’s LGBTQ+ vertical. Upon announcing the true name functionality, Citi received over 50 earned media articles from a variety of publications, including mainstream press, financial media and LGBTQ+ outlets. In the months since launch, total coverage has reached 146.2 million impressions and counting.

The campaign finished with strong awareness results with an overall lift of 10%, beating benchmarks by +7 ppt. The vast majority of users (73%) who were exposed to the Pride Media content program were able to tie positive associations back to Citi. High-profile sponsorships such as the Out100 Virtual Event positioned Citi as an authentic voice in the space, with 83% of respondents agreeing that the integration was impactful and appropriately executed.

Beyond the numbers, Citi was able to bring greater visibility to the transgender and non-binary community, driving conversation around the need for more inclusive messaging and representation in advertising.

Most importantly, over 5,000 customers have already updated their name on their Citi eligible Branded credit cards/accounts - sharing powerful responses, such as: “I wish that there was something like this when I began my transition. This will remove one of the many worries that we have all had when we were introducing our true selves to the world. I know that this caring gesture will mean a lot to all of us.”

Video for Now that you see me 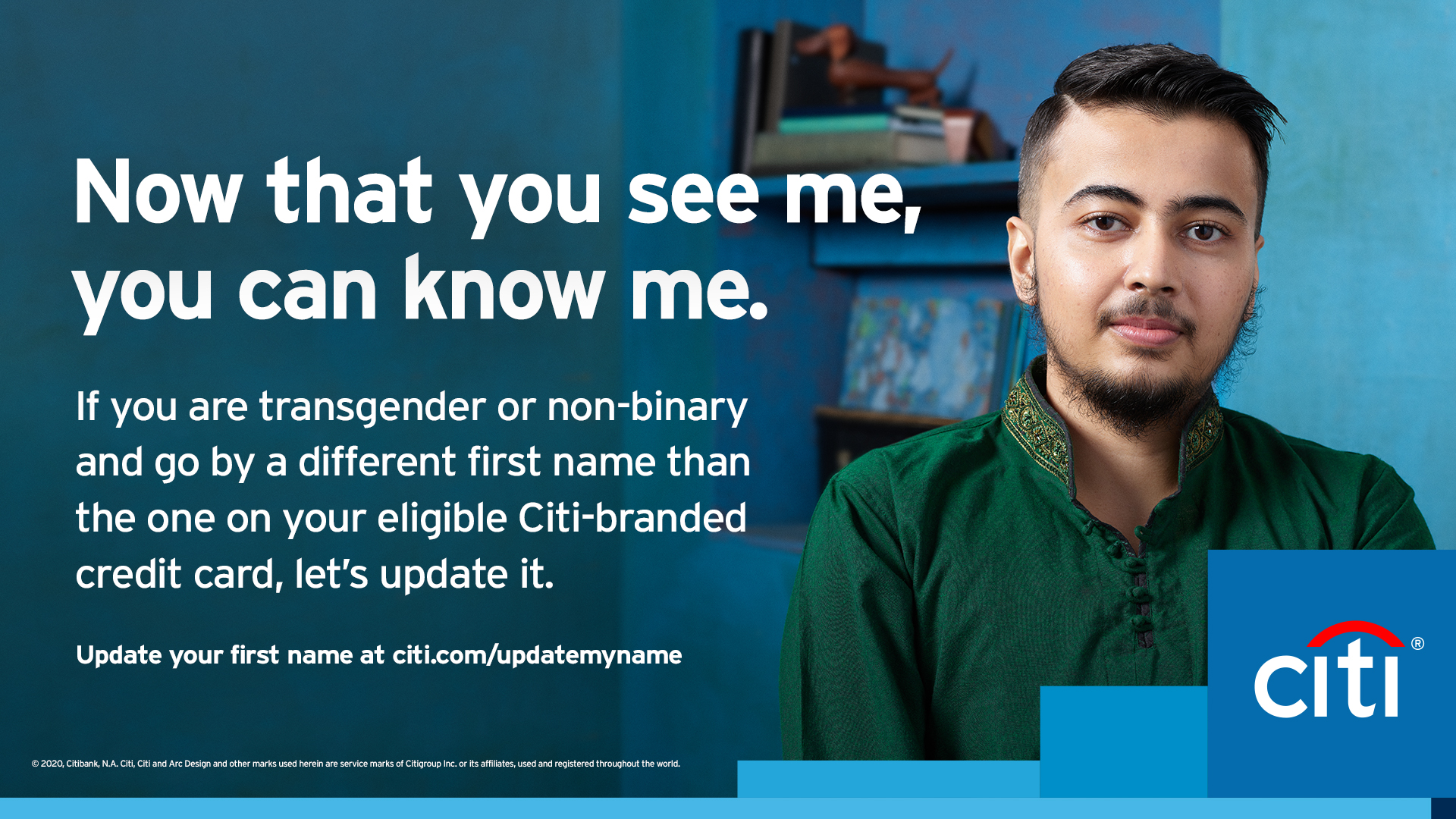 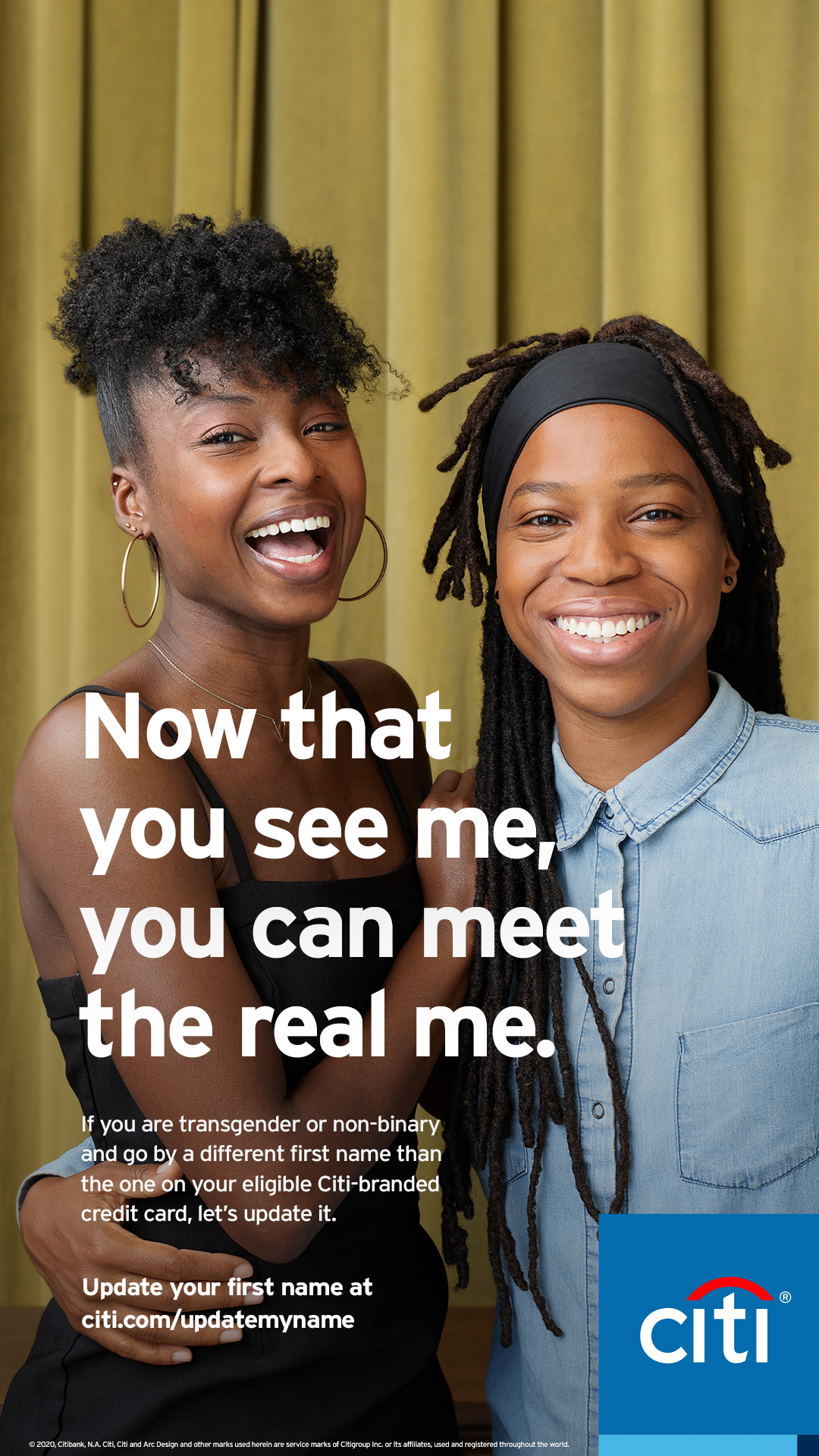 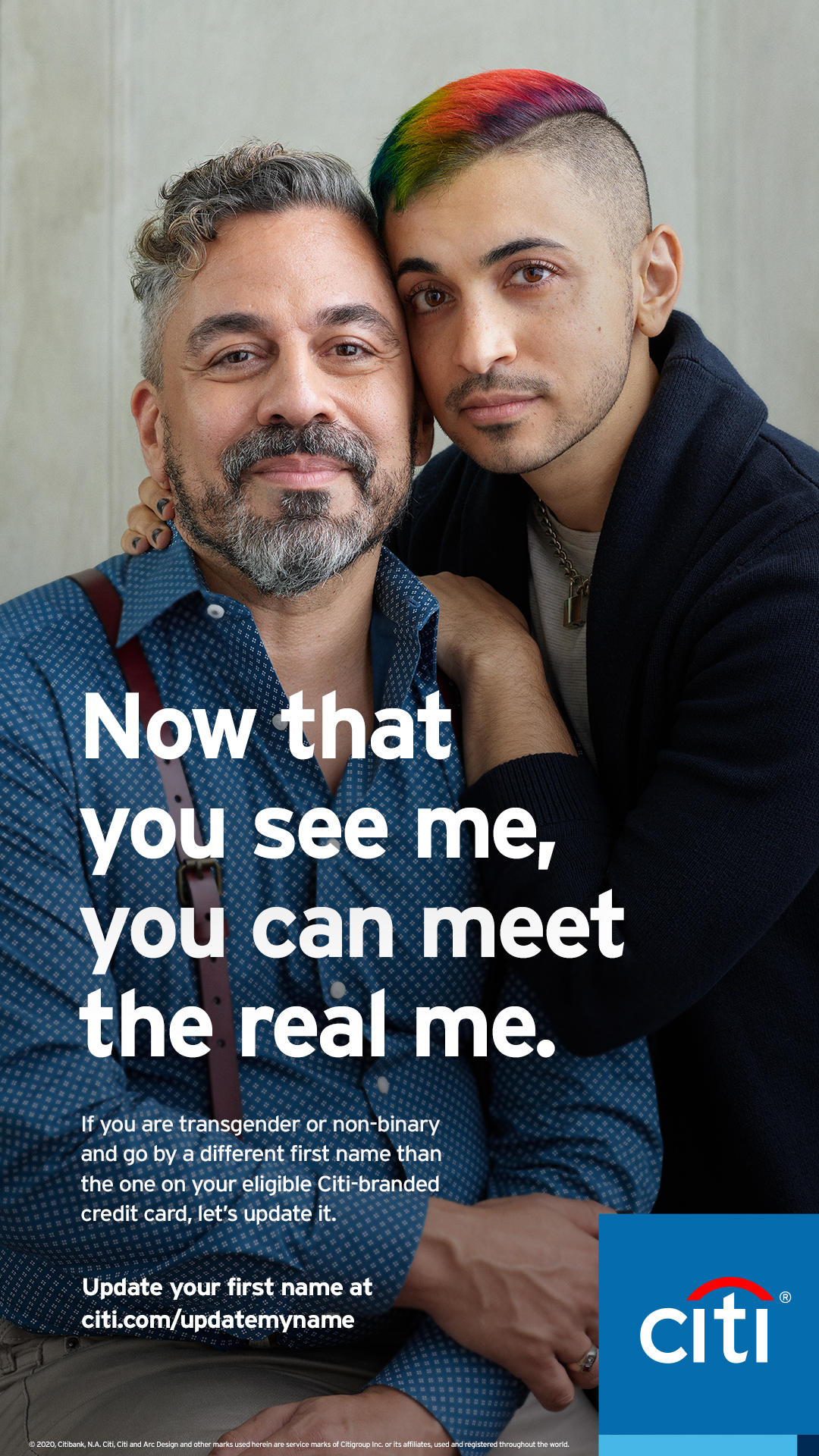 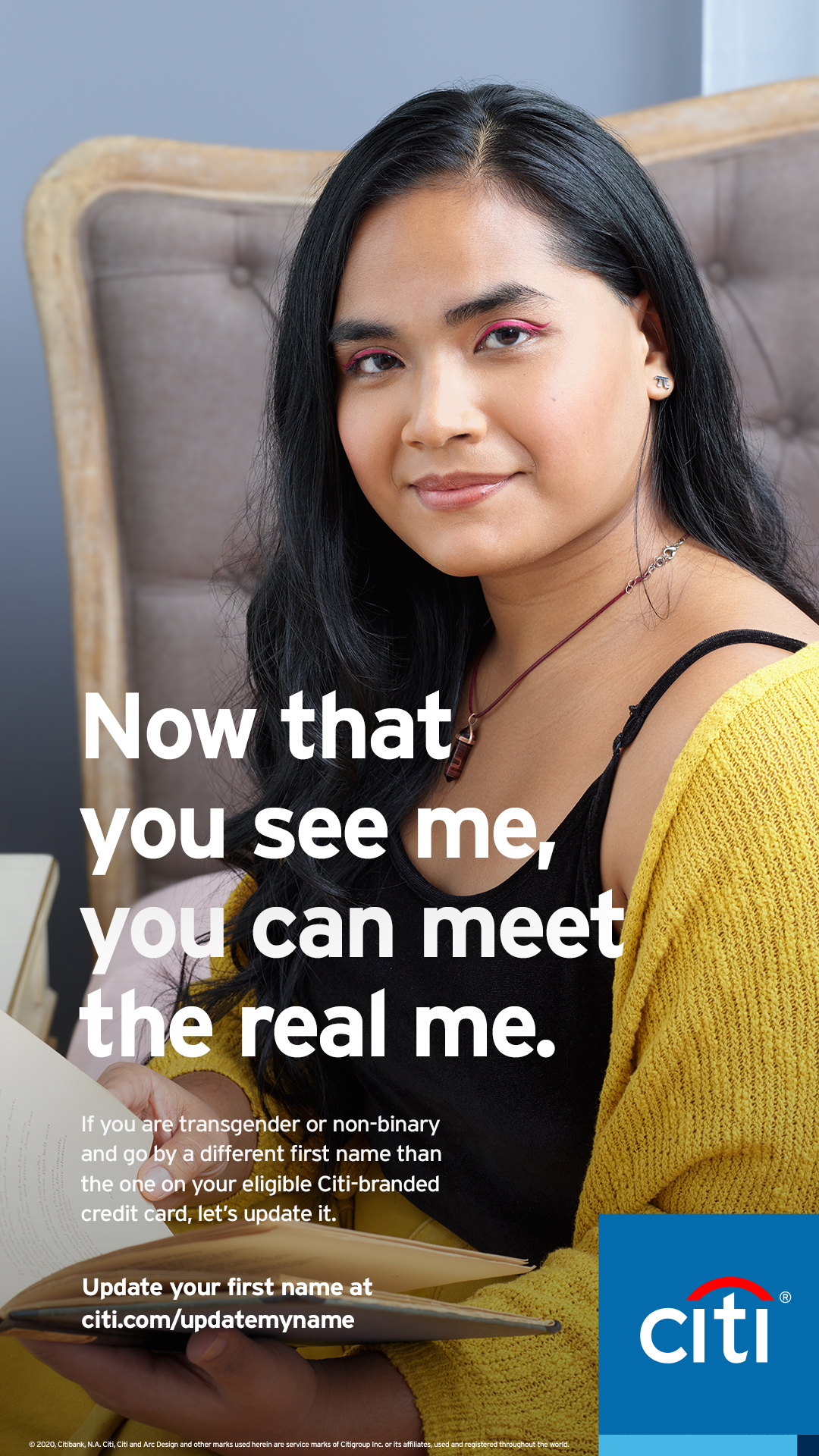 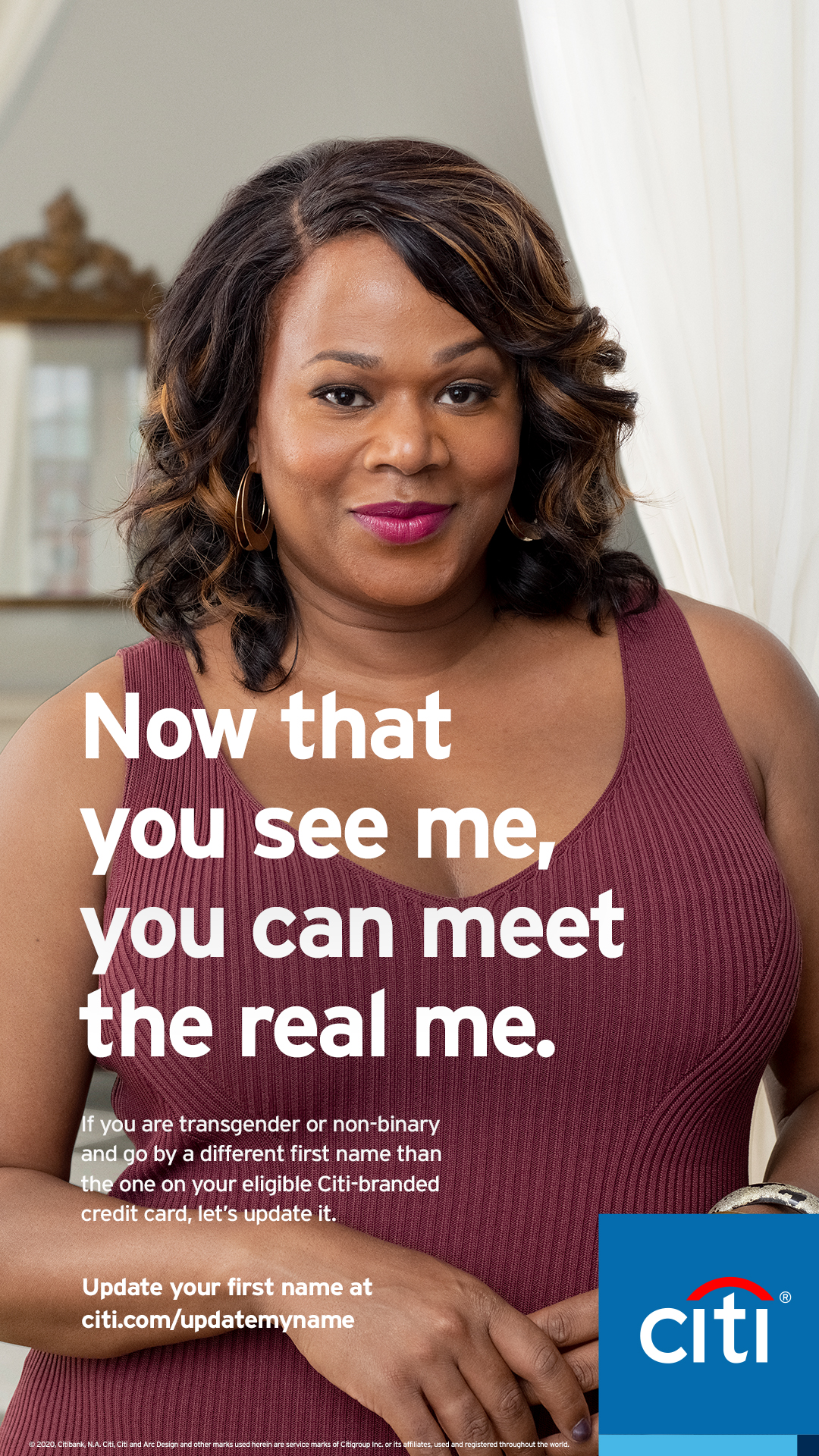