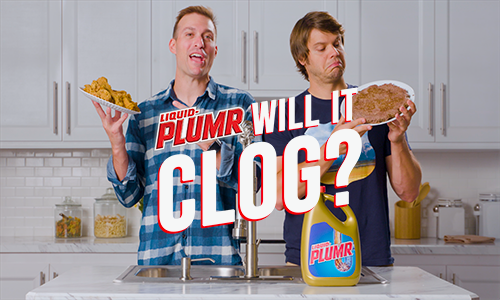 Sadly, drain openers are not often the most sought after cleaning products. Research has shown that the decision to purchase a particular drain opener is made closest to the shelf. And, Liquid-Plumr®'s business was stuck in a clog.

Top-of-mind awareness in the category is owned by Drano and sales of Liquid-Plumr® were not growing (despite the category growing). Liquid-Plumr®'s big TV awareness-focused branding campaigns had failed to move the needle, so they needed a new approach.

The brand examined the consumer's path to purchase. They found that when faced with a clog, consumers search Google and come across rough DIY solutions that do not fully rectify the issue, followed by going in-store to buy a drain opener. Without any meaningful claims in the category, people buy Drano because it's what they know.

Liquid-Plumr® needed a campaign to make them stand out with consumers and show them the sheer power of the product in order to change purchase decision and win at the aisle.

Reach developed a campaign titled "Will It Clog" to put Liquid-Plumr® up against extreme clogs in order to demonstrate the product's capabilities. This was a different approach for the category and therefore required a different execution.

With the category-standard of advertising using pristine sinks, crystal clear water and tidy clogs, we needed to not only show consumers a more authentic, down and dirty depiction of clogs but also the relief consumers feel when the issue is resolved.

In addition to bringing candor and relatability to the category, we needed to combat search and reach consumers before the aisle. This is why the heart of the campaign was a YouTube content series rooted in the popular "Will It?" format.

Prior to this campaign, category advertising efforts were focused on hair, grease and soap scum clogs. But we wanted to show consumers that it could work on more than that. As a result, Liquid-Plumr®'s R&D tested and validated a new frontier, including some unexpected items, separating the brand and the content even further from competitors.

Our challenge was finding the right talent who could naturally take on this series, while also bringing it to life in a spectacular way. We tapped VAT19, popular YouTubers who produce amazing challenge videos, build wild contraptions and perform outrageous stunts. Having done previous videos on "Will It Blend?" and "Will It Steamroll?", "Will It Clog?" was a perfect fit for their channel.

Once we found great talent, we turned to data to help shape the series. Insights not only indicated the most common types of clogs, but also that holidays were key times that people faced the stress of clogged pipes.

Over the course of three episodes, VAT19 put Liquid-Plumr® up against common clogs, like a huge bacon grease clog, the extreme, like a whole thanksgiving meal, and the ridiculous, like the World's Largest Gummy Worm.

After the first episode trended, the brand knew we were on to something and decided to double down.

We created branded media assets utilizing the influencer's footage that was used across social and digital, including the brand's website and even display banners. As a result, Liquid-Plumr® was able to create a multi-touchpoint campaign that had consistent creative all powered by influencers.

Engaging consumers even further, Liquid-Plumr® launched a Promoted Trend on Twitter to ask consumers what clog they wanted to see next. The top trending requests were then featured in our third content episode.

The brand even brought one of the brand videos to TV alongside an integration on Jimmy Kimmel Live. Closing out the campaign with a bang, Will Ferrell shared his love for the series during his Rose Bowl broadcast as he jokingly teased creating his own version.

The influencer videos generated over 6M organic views and trended in the Top 11 videos on YouTube, which is an impressive feat but even more so for a sponsored video.

The brand videos received best-in-class designations from YouTube (meaning that they performed in the top 25% quartile against other CPG studies running at the same time) and received over 14M views.

Banner assets drove above-average awareness, consideration and favorability, and were successful in shifting consumers' perception to Liquid-Plumr® being a product that is powerful and destroys tough clogs.

The Twitter promoted trend resulted in over 50M impressions and a 99x increase in brand-related mentions.

The TV integration on Jimmy Kimmel Live! and the plug by Will Ferrell during the 2019 Rose Bowl Parade were each seen by over 4 million people.

Overall, the campaign was an incredible success with over 75M impressions and resulted in the brand's best share growth since 2015. After previously unsuccessful marketing tactics, Liquid-Plumr®'s "Will It Clog?" campaign drove success across all metrics, and revolutionized the way that the category approached visuals in advertising.

Video for WILL IT CLOG? 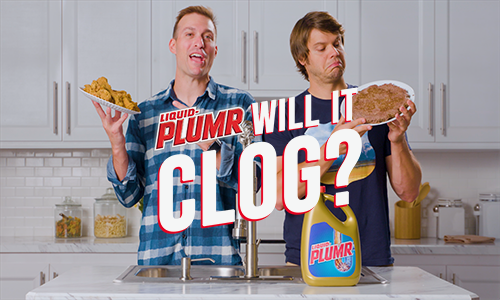