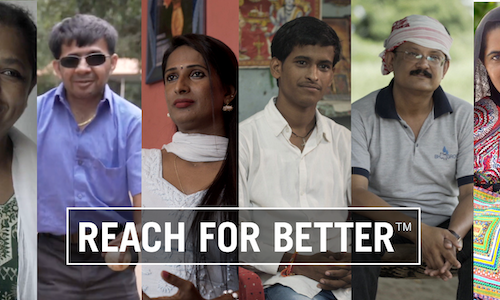 Franklin Templeton Investments (India), one of the leading fund houses in the country, in partnership with The Better India, Asia's largest impact-media platform, launched a six-part video series titled "Reach for Better" where through 6 films we showcased 6 values that one should imbibe to Reach For Better in their lives as well as with their investments - Stay resilient, Start early, Have a goal, Never too late to begin, Step up consistently & Seek guidance.

To ensure the authenticity of the stories and to convey the message in most effective way - we decided to let the story take the centre-stage. Using a docu-style format, we showcased the journey of each protagonist in the most compact yet enlightening way, while powerfully delivering the brand's message.

Each protagonists' narrative was woven in a way that emphasis on the respective value did not go amiss, enabling easy delivery of the core brand message.

By using real life storytelling, we were able to deliver the message about mutual fund investment in a far more convincing way, thereby paving the way for better engagement and meaningful conversations about life and Investments with the audience.

Each video received around 3 MN views, of which 40% views were organic. Videos received high engagement, engaging in meaningful two-way conversations!

The campaign has been recognized by Brand Equity, Afaqs, Social Samosa, Business world, Ad Age India, Campaigns of the world and other major advertising & media platforms in India.

Video for Reach For Better