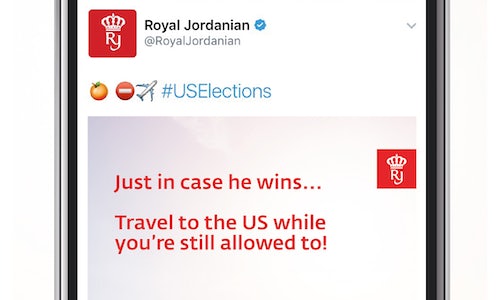 Finalist in The Middle East

Audience Honor in The Middle East

Like any other airline brand, Royal Jordanian has been facing some negative attitudes in regards to its prices, punctuality, services, etc. Moreover, due to instability in the region, tourism in the country had decreased, affecting sales.

Our aim was to enhance affinity, and increase consideration to purchase by presenting Royal Jordanian as a responsive and relevant brand by:

•Joining in on a conversation the customers were already having

Donald Trump and Hillary Clinton were head to head in arguably the most controversial and vicious elections of modern history, widely watched by the world as elections came to an end on Nov. 8th, 2016.

In one of his speeches, Trump promised to ban Muslims from entering the US if he won presidency. Approximately 97% of the Jordanian population is Muslim.

Targeting Royal Jordanian customers and potential customers, we seized the opportunity to launch a satirical tweet, capitalizing on Trump's proposed ban on Muslims while offering discount rates on flights to destinations in the US.

The ad campaign was prepared in less than 24 hours and was shared on Royal Jordanian's social media platforms one day before Election Day.

Bookings to the US increased by 50% and traffic to Royal Jordanian's website increased by 33%. The campaign achieved 450 million organic impressions. 26 official news sites and blogs reported the ad along with 25 celebrity journalists.The campaign cost USD 0 and the PR value reached USD 874,000.

The ad generated an outpour of online and offline support for Royal Jordanian, enhanced the airline's affinity and cheered people up in troubling times. It also diluted the stereotype that Jordanians are too serious. Other brands joined the conversation we created, and top media and digital sites around the world voted the ad as one of the best #USElections tweets 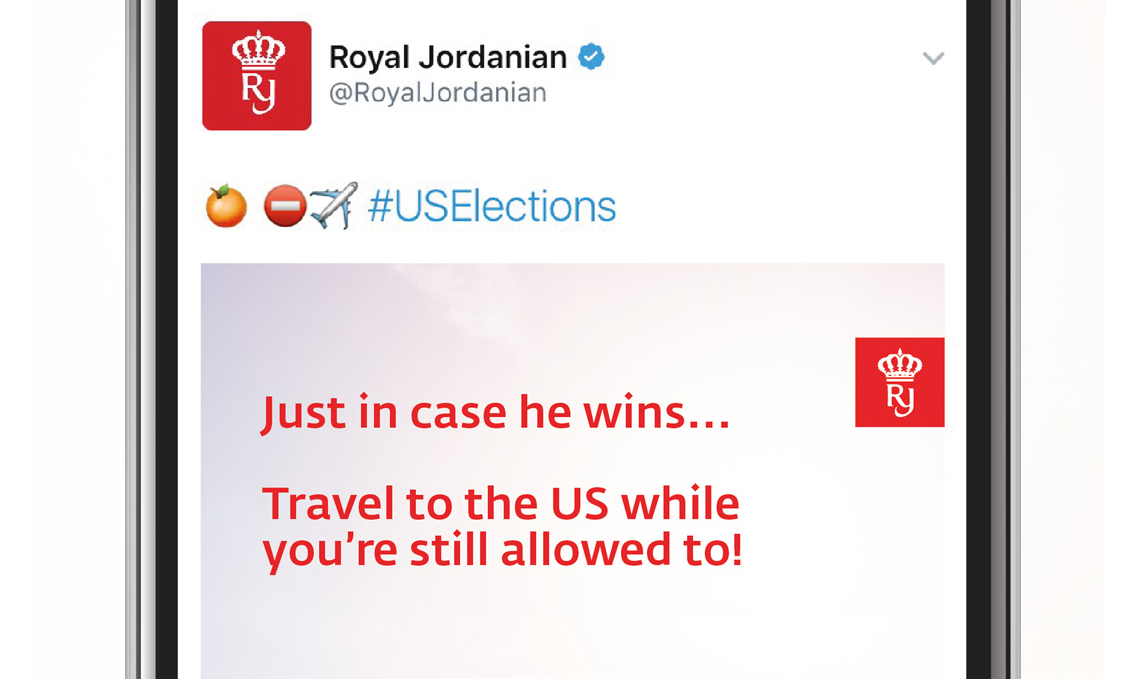