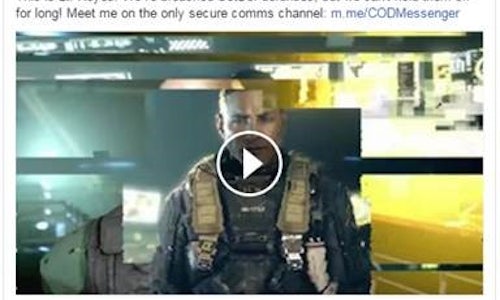 To reveal the long-awaited installment of the $10B Call of Duty franchise: Infinite Warfare, Activision infiltrated the best-selling game of 2015, Call of Duty: Black Ops III, to engage gamers directly with a special message in an interactive adventure like never before. Together with Resolution Media and OMD, Activision launched an integrated digital campaign amplifying the creative execution utilizing Facebook Messenger, Live Streaming, Chat Bots and an in-game takeover to reach their target audience.

Beginning on Friday, April 29, 2016, new characters and an airship from Infinite Warfare inexplicably appeared within the Black Ops III game environment with a hostile takeover message, prompting a massive scavenger hunt and online chatter amongst the gaming community. On Sunday, Lt. Reyes, the main character of Infinite Warfare, instructed Black Ops III players to head to the only secure communications channel available: Facebook Messenger. This message was also posted via Facebook LiveStream from the Call of Duty page. Once on Messenger, users could interact with a Lt. Reyes chat bot to acquire additional information about the game and receive a link to the highly anticipated reveal trailer.

Seeking to amplify the scale of the campaign, Activision called on Resolution Media to activate a paid media strategy to quickly increase visibility on the organic post and drive engagements with the Lt. Reyes chat bot on Messenger.

Campaigns were structured with an audience-centric approach, enabling the Resolution team to quickly draw insights and optimize in real time. Leveraging a combination of digital communication tools, the team rallied from remote locations to setup, launch and execute the campaigns while providing frequent updates to the client and other stakeholders throughout the day.

By Sunday afternoon, the in-game announcement and Facebook LiveStream were already being widely praised by the gaming community. At the conclusion of the paid amplification portion of the Infinite Warfare "Hostile Takeover" campaign, Resolution's results for Activision were remarkable:

- More than 5.2M people reached through the targeted Facebook campaign

- More than 15.7K ad clicks of the Messenger link 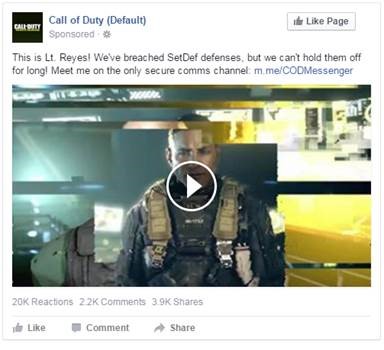