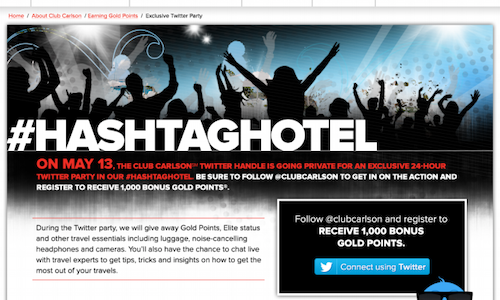 Club Carlson, a loyalty program for Carlson Rezidor properties, wanted a campaign that could extend its loyalty program and drive higher levels of member engagement. To do this, the brand viewed social media campaigns as a way to provide exclusive opportunities, while deepening member activity with the brand. Based on this strategy, #HashtagHotel was born: a 24 hour Twitter party available only to Club Carlson's loyal members and followers. Leading up to the party, Club Carlson offered members 1,000 Gold Points for following the brand on Twitter – a message that helped convert its members to followers of the brand. Once the party started, the Club Carlson Twitter handle went private and a 24-hour Twitter party started. This party was 24 hours of non-stop engagement, consisting of travel influencer chats, real-time two-way conversations between Club Carlson and the community, and hourly prizes awarded to those followers engaging with the party. Since Club Carlson is a global program, content was also shared to engage with members worldwide and to target specific time zones. From this non-stop activity, Club Carlson received over 14MM impressions, trended nationally on Twitter 8 times in 24 hours, and had over 10k uses of the hashtag for the party. While followers and direct revenue were not a goal of the campaign, the brand's Twitter presence grew 70% and the program generated more direct revenue from members than the program cost.

This campaign was counter-intuitive – as most brands are loathe to limit the number of people who can participate in a program. However, we created exclusivity by locking the brand's Twitter handle for a set period of time. This was a strong social driver for participation and actually helped Club Carlson members feel as if the brand's social channels were worth following. It also took a simple concept (a Twitter party) and layered powerful social drivers to amplify success. Anticipation beforehand had the unintentional consequence of generating a 70% increase in followers. The excitement of hosting a Twitter party for 24-hours and the curiosity members had for what they could expect drove large volumes of conversations (over 10k), and led to trending 8 hours of the 24 the program was running (with a positive sentiment of 97%). Additionally – it was a social campaign that could activate members at a global level – with content timed to the specific regions of the world that were awake. Overall, the effectiveness of this campaign is a direct result of the brand valuing engagement with current members over acquiring new ones. 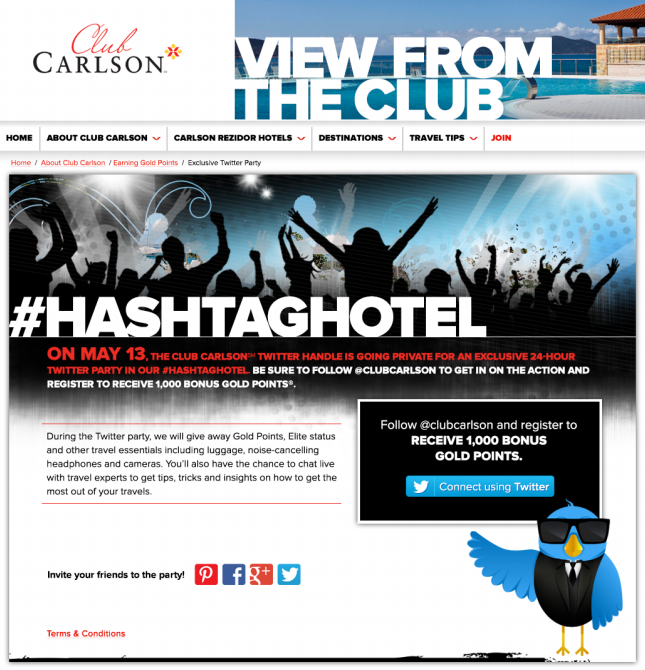