Samsung Recharges Galaxy Phones with a Tweet at SXSW

At SXSW 2013, Samsung Mobile US reinvented how brands use Twitter by introducing #PowerOn—a first-ever program that allowed Samsung Galaxy owners to recharge their phones with a tweet. By bridging online and offline experiences in real time, #PowerOn made a material improvement in our consumers’ overall festival experience. During the nine days of the festival, Galaxy owners whose batteries started to run low could simply tweet “#PowerOn"— and within seconds our community management team based in a social media “War Room" on the ground in Austin would dispatch a bike messenger to their location to swap for a fully-charged battery. And, it catalyzed conversations online and in media. Generating brand awareness to the tune of 36.6MM impressions, it accounted for more than 25% of our social chatter at the festival. This propelled Samsung to #1 in Mashable’s SXSW Trendspotter for brands and #2 on Forbes’ list of Top 5 Lessons for Marketers from SXSW. In 2013, Samsung Mobile US set out to increase the cultural cachet of being a Galaxy owner. In doing so, they believed that they could increase demand for Galaxy devices, better retain existing customers and elevate the Samsung Galaxy brand as a whole. As a device manufacturer, Samsung already was facilitating thousands of meaningful online conversations every day—but it needed a way to bridge those interactions with real-world experiences. With SXSW 2013 on the horizon, Samsung issued a challenge to Edelman Digital: create an inclusive, high impact VIP experience at a major cultural event that would keep Galaxy owners front and center, materially enhance their experience, and give them bragging rights along the way. Choosing the event was easy. Each year, the SXSW family of events—Music, Film & Interactive— brings together the foremost thought leaders, creative minds and industry professionals for the largest convergent event of its kind in the world. During the nine days of panels, performances and events, Galaxy owners would have their devices in hand 24/7 to capture photos and videos, network, and share. And with an expected attendance of 400,000+ in 2013, we had the opportunity to make an enormous impression. But to stand out, we would need a program that was not only completely unique but also that provided real value to Samsung’s consumers. By tapping Edelman Digital’s network of previous SXSW attendees, we knew that battery life would be one of the #1 pet peeves at the festival—and that influential users would be comparing their battery life to other devices and mobile brands. While charging stations were on the rise, these required users to stop and recharge, sometimes for hours—giving Samsung a unique window of opportunity to highlight the perks of Galaxy ownership through an exclusive owner rewards program. With this in mind, Samsung Mobile US introduced an industry-first, Twitter-powered consumer relationship program to help festival goers stay charged without having to plug in. During the nine days of the festival, Galaxy owners whose batteries started to run low could simply tweet “#PowerOn"—and within seconds our fully-armed community management team would dispatch a bike messenger to their location to swap for a fully-charged battery, averaging fewer than 10 minutes for delivery time. Not only did this highlight a product feature that helped the Galaxy line stand out from competitive devices—the removable battery—but the social feedback consistently recognized that we had solved a major pain point in the festival experience, and had done so in an interactive and dynamic way that truly fit the spirit of SXSW. Staying ahead of the emerging trend of real-time marketing, #PowerOn engaged a highly targeted user-base with instant communications and rewards that answered a very real complaint about the festival experience. We consistently impressed through flawless execution and a great user experience—all powered on the ground in Austin. #PowerOn not only showcased the benefits of Galaxy ownership but also enhanced the SXSW experience and gave our Galaxy owners bragging rights along the way. The program shattered forecasts by swapping nearly 3,000 total Galaxy S III and Note II batteries. This ground-up approach catalyzed social conversations, with more than 4.5K mentions on Twitter. In total, we generated brand awareness to the tune of 36.6MM impressions and for about 25% of the chatter about Samsung at SXSW. In the words of Forbes, “The unspoken motto for SXSW is #AlwaysBeCharging, and Samsung again took that to heart and provided a great consumer appreciation tactic with free battery swaps for Galaxy owners who were running low on power…it was a beautifully executed customer relationship tactic that allowed Galaxy owners to feel like true VIPs." 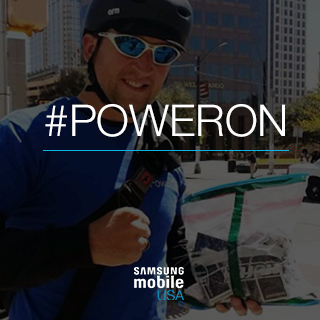