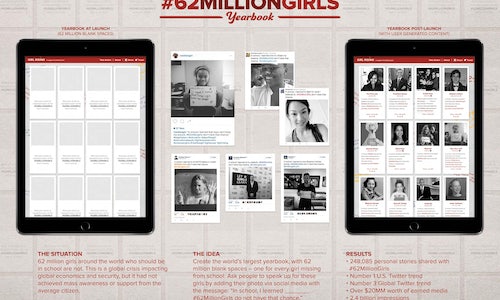 In March 2015, the President and First Lady Michelle Obama launched the Let Girls Learn initiative to address a global crisis: 62 million girls around the world are denied their right to an education because of their gender. The launch of the initiative was welcomed in international development and advocacy circles, but the issue of girls' education was still not getting the attention it deserved.

Our primary objective was to raise awareness of this global issue and spark mass participation from the American public. Additionally, the First Lady hoped to inspire American girls and boys to appreciate their own educational opportunities.

We partnered with Girl Rising, a non-profit organization also working to raise awareness of this issue, to create a campaign in support of Let Girls Learn. Edelman took this on as a pro-bono project, investing both hours and the costs associated with creating all of the campaign's creative assets.

Gaining the attention and support of a mass audience in the United States on an international issue is a huge challenge, particularly at a time when other crises such as terrorism, refugees, and infectious disease are front and center every day. Additionally, the barriers that keep girls around the world out of school are complex and vary by region, so we needed to create a simple way to communicate the severity of the issue while helping people connect to it personally and emotionally – the key to inspiring action.

To help this issue earn the attention it deserves, we led with the most shocking and memorable statistic: the number of girls currently out of school. But we knew that numbers would not be enough. To inspire participation, we needed to connect with people personally. Our insight was that when people reflect on their own education, it's much more than just reading and writing -- they reflect on how it made them who they are today. Therefore, when the audience imagines being denied their own education, it's an emotional trigger that inspires them to get involved.

We had to show the world what millions of cases of unrealized potential looks like. So we created the world's largest yearbook with 62 million blank spaces -- one for every girl missing from school. We asked people to fill in those spaces and share exactly why education matters to all of us. We called on them to Tweet or Instagram a school yearbook-style photo of themselves and complete the phrase "In school I learned ____. #62MillionGirls never have that chance."

By creating a scrolling display of 62,000,000 blank spaces in a single yearbook, we visualized the enormity of the issue. We helped people emotionally connect to a complex problem by asking them to think about their own education, and gave them a simple way to get involved in the solution.

We launched the campaign with an announcement by First Lady Michelle Obama at the Global Citizen Festival in New York's Central Park. She asked attendees to participate on the spot, and right away the campaign began to see participation from A-list attendees including Beyonce, Bono, Frida Pinto, Stephen Colbert, Leonardo DiCaprio and more, which extended the reach of our message organically and sparked early participation from people around the world.

Within hours of Mrs. Obama's announcement, #62MillionGirls organically trended on Twitter at #1 in the U.S. and #3 globally. The conversation was covered in dozens of top tier news organizations from CNN, to the Washington Post, to MTV. Influential voices -- including President Obama, Malala Yousafzai, Mindy Kaling and even Big Bird – joined in and helped extend the reach of the campaign through their social followings.

Participation took off in schools, with teachers using it as a classroom tool to inspire students to value education. Students participated in the yearbook, created artwork inspired by the campaign, and even organized fundraisers to raise money for the Let Girls Learn fund.

In just a few weeks, over 248,000 "In school I learned…" stories were shared with #62MillionGirls. The campaign generated over $20MM worth of earned media, resulting in over 2.4 billion potential impressions.

The surge in participation shined a spotlight on the education crisis, and #62MillionGirls became a rallying cry, appearing in coverage about gender equality globally. The campaign also resulted in an uptick in support for girls education, and even inspired the pop song "This is For My Girls," written by Diane Warren and performed by Missy Elliot, Zendaya, Kelly Clarkson, and more, which was sold on iTunes with proceeds going toward the initiative.

In the end, we created a simple platform to discuss a complex global problem that helped build momentum to find a solution.

Video for The #62MillionGirls Yearbook 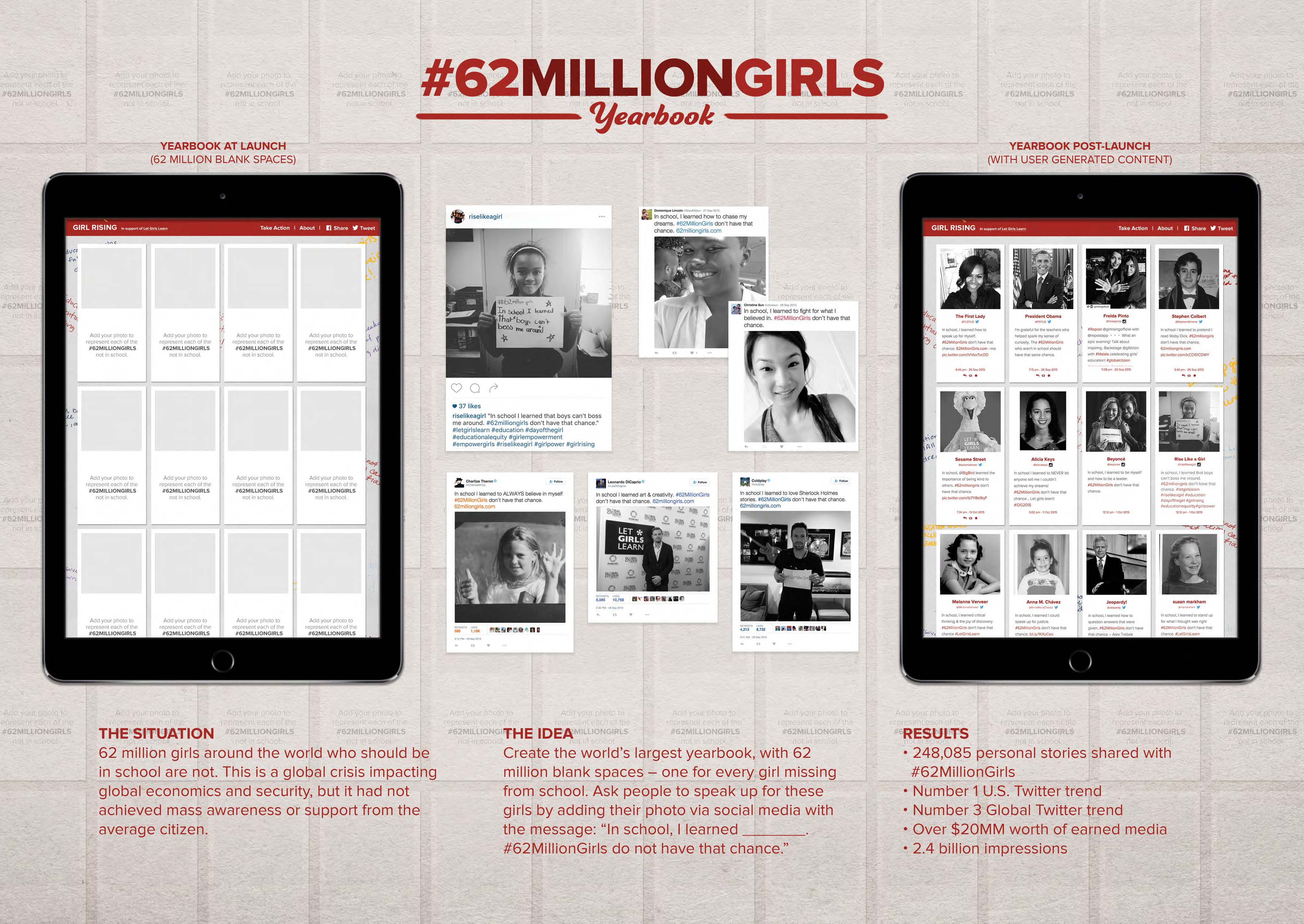