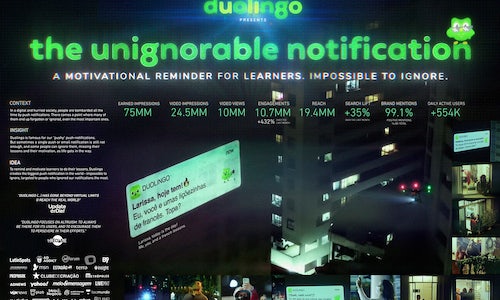 Duolingo is the world's largest free language learning app, with over 500 million users worldwide and 30 million in Brazil alone. As the second largest market for the application's users, the Brazilian market still has a huge potential for growth, both in new users and in users who have stopped using the platform for a while. Thus, the main goal of the campaign was to identify those students who for some reason stopped using the platform - and were ignoring the app's mobile notifications - and bring them back; attract new users in this potential market; celebrate their love and regard for the brand; and preferably generate buzz.

All audiences are potential users of Duolingo. By having more than 40 language options to learn (including some unusual ones such as Klingon from Star Trek and High Valyrian from Game of Thrones) the App appeals to all social classes, ages and cultural styles.

The social isolation caused by the pandemic has limited the possibilities for brand impact in an offline way. At the same time, keeping motivated and committed to learning a language is very challenging. In a digital and rushed society, people are also bombarded all the time by push notifications and some Duolingo students could progress, achieve good sequences, but end up giving up because of these things. There comes a point where many of those notifications end up forgotten or ignored, even the most important ones. With the creation of our innovative DOOH we actually created a new media channel, an "moving billboard", and have brought a fun and convincing push notification to the window of our dear students. This was only possible because of a robust data analysis to pinpoint how long those students had been away from the platform, their previous performance, the languages they were studying, their geographic (macro) and micrographic (nearby neighborhoods, homes with nearby buildings, visibility from their windows) locations to enable the logistics.

During the Covid19 pandemic we have identified a typical behavior in social isolation: increased search for remote learning. And it was no different with Duolingo at the beginning of the pandemic, with 30% more users returning to use the App to brush up on language learning and another 25% new users who had just discovered the learning platform. Listening to Social Media, we have identified an innate characteristic of the Duo character, Duolingo's owl: his reputation as a needy owl, who engages his students greatly through fun, insistent, and unexpected push notifications directly to his users' cell phones. Duo's fans see him as a true Stalker for education. And people love it. But they also ignore the notifications. Based on these insights and a robust data analysis, we came up with the idea to remind and motivate students to take their classes: we've created for Duolingo the world's largest push notification - impossible to ignore, targeted at the people who would ignore our notifications the most. We mapped out who the runaway students were and had a history of learning with Duolingo, yet hadn't yet surrendered to Duo's onslaughts and callback notifications. And in order to help with this task, we've recruited friends and/or family members from those who missed their "onslaughts" to identify who those students were and those who were ignoring the notifications. So we started designing and elaborate strategy, which involved recruitment through social media teasers to seek out stories from former students, geolocation mapping to identify regions where they were located, our own learner data and the most important thing, an unprecedented way to deliver the world's largest push notification directly to the homes of those ignorant students who were socially isolated because of the pandemic. We built an unprecedented drone, which featured a very high resolution projector to reach the size of up to 50ft projection diameter, using neighboring buildings of such students in the city of São Paulo as a screen to remind them, through fun personalized push notifications, to come back to Duolingo.

Our traquitana was also equipped with several cameras to capture all the reactions of these dear students and potential new users passing by on the city streets. We also had micro digital influencers that helped to boost the buzz on social networks during the push screenings for the chosen students. We used Duolingo's official social channels to show the world how Duo Owl is capable of anything to bring its students back and help them achieve their goals through learning.

The campaign generated a tremendous buzz in Brazil and spreaded to the world. Bringing the Duo Owl to the real life of the users generated a lot of word of mouth, positive reviews and consideration to the brand. And with that, we had 554K more active learners during the campaign period, only in the Brazillian market. Not only did the idea work in our target market, but it scaled penetrating the US and other key markets with millions of organic views.

Video for The Unignorable Notification 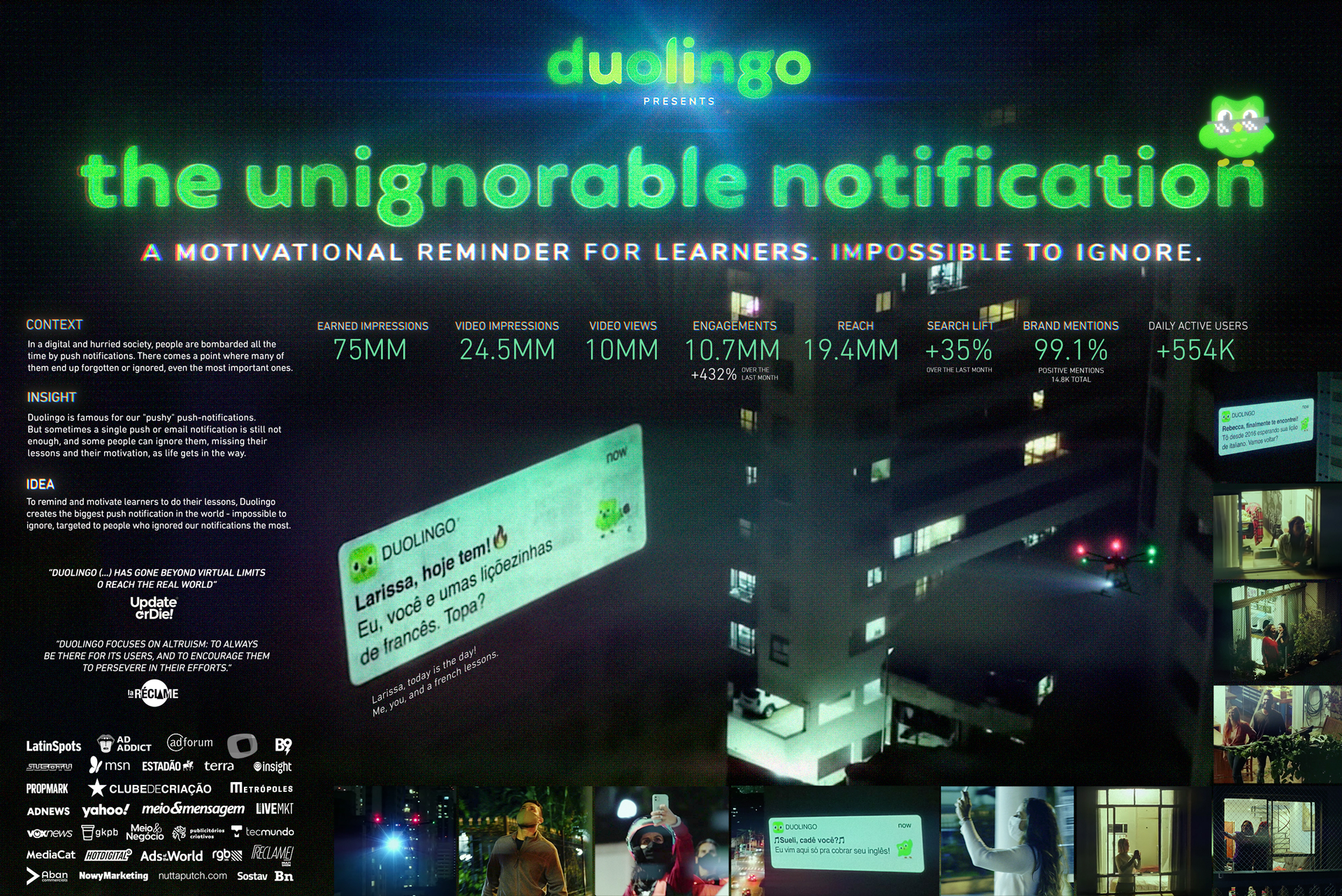