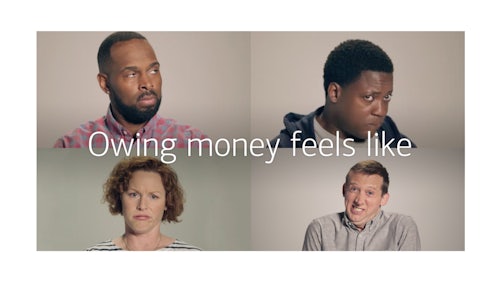 With Zelle peer-to-peer payment technology newly added to its app, Bank of America wanted to take on the likes of Venmo and Paypal. But payment apps aren't all that different from each other. So we needed to separate ourselves from the others, and figure out a way to increase app downloads and usage, as well as boost how people view Bank of America as a brand. We decided to reach consumers with a simple, authentic human truth: "owing money creates tension in relationships."

To help motivate people to do what's right and pay people back, the strategy behind the "Friends Again" campaign was to first prove what our gut was telling us. So we commissioned a study about the effect owing money has on friendships. Armed with the results from this study, we brought the issue of friends owing money in to the public consciousness—and established the Bank of America app as the solution—through broadcast, and in social channels where people chat, connect and share with friends, families and peers.

We created relateable stories that showed Bank of America as a brand that understood what consumers were experiencing. And for weeks, we shared these stories and situations through video, interactive posts and polls, conversational ads and more throughout Instagram, Twitter, Facebook, and Pinterest. We tapped into the power of social influencers (in our target audience) and had them create their own Pay-Back-A-Friend situations. We created a suite of animated personas representing the types of people who usually owe money so that people could tag them and share them with their friends.

All efforts led up to one day—October 17th—where we announced (through a custom in-show integration with Jimmy Kimmel Live) that this day was the first ever Pay-Back-A-Friend Day. With the help of social media influencers like Josh Peck, Aidy Bryant, Lamorne Morris, Liza Koshy and more, we challenged people to do what's right and pay back their friends. Across all of social, we harnessed thousands of conversations around friends reconnecting, and for 24 hours straight, we reacted and responded in real time—and helped to ignite more stories and discussion.

Bank of America's app saw over $1.5 billion exchanged between friends, an increase in enrollments by 54% and 5 million+ transactions in the first month of launch, up 90% from the same month last year.

There were over 35 million total engagements in one day on social, and we experienced an unprecedented lift in brand favorability (Twitter, 22 pts., Snapchat, 12pts.) We broke a record for social sentiment, doubling Bank of America's previous campaign high. In 6 weeks time, we created awareness of Pay Back A Friend Day at levels 44% higher than the "Giving Tuesday" holiday that's had 6 years of marketing support. 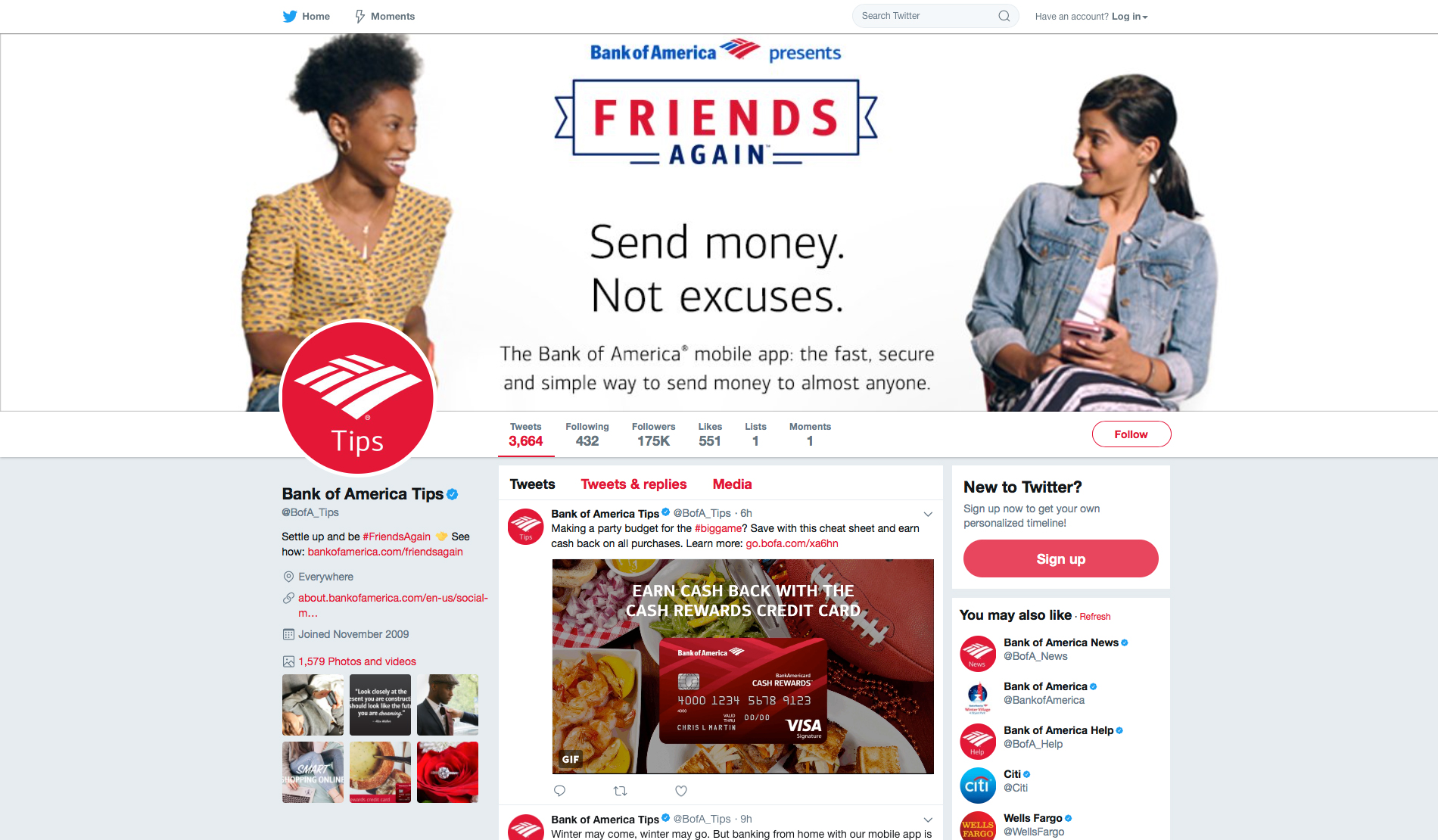 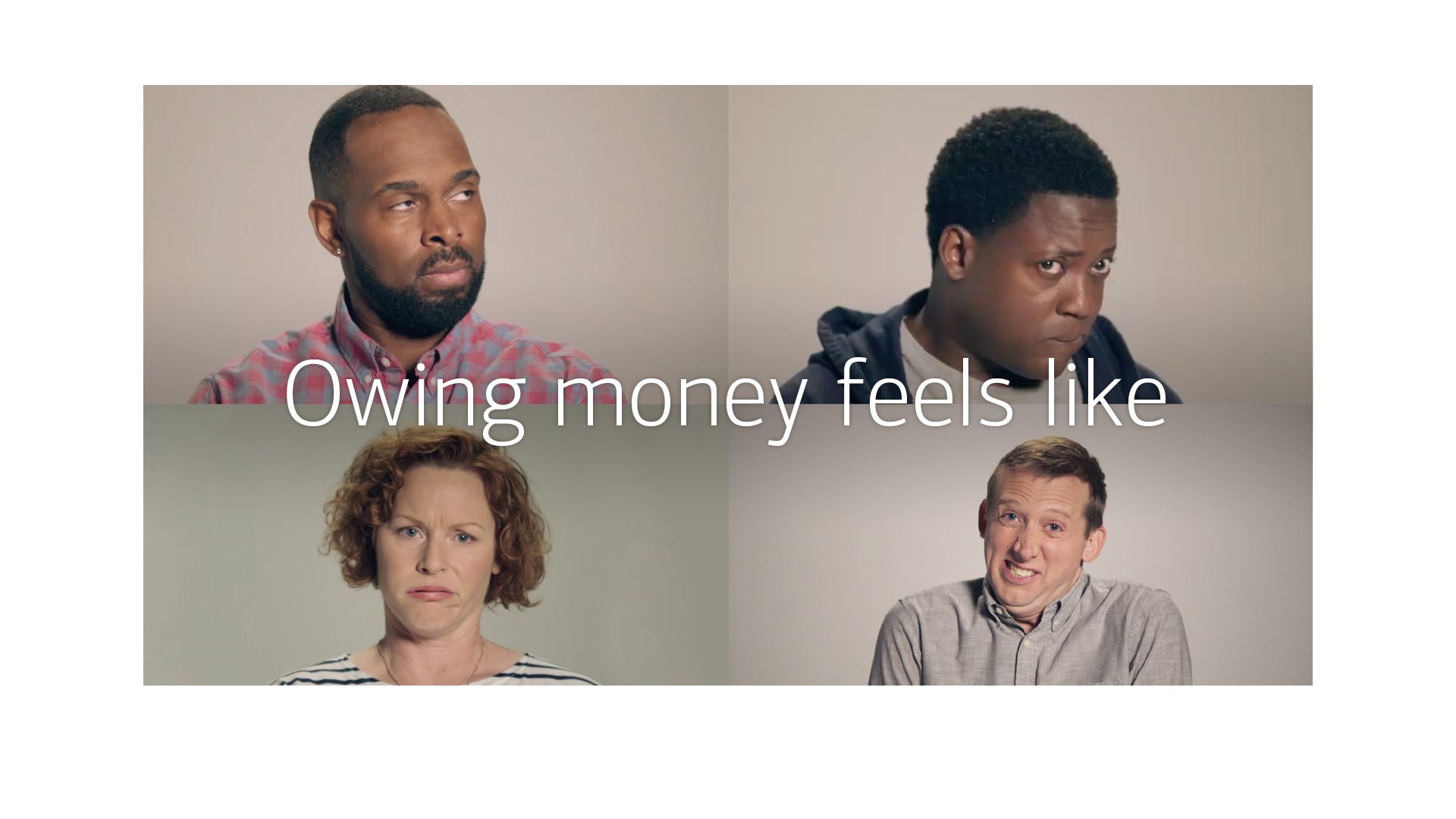 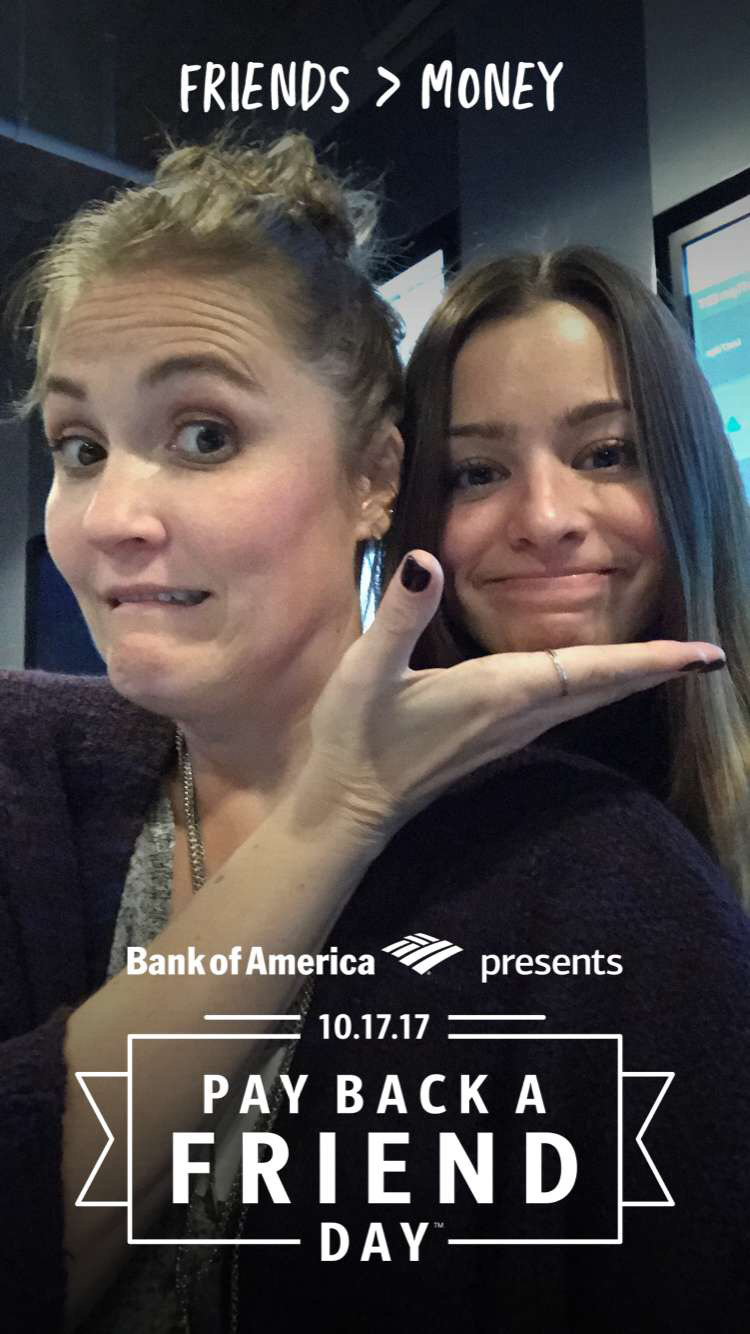 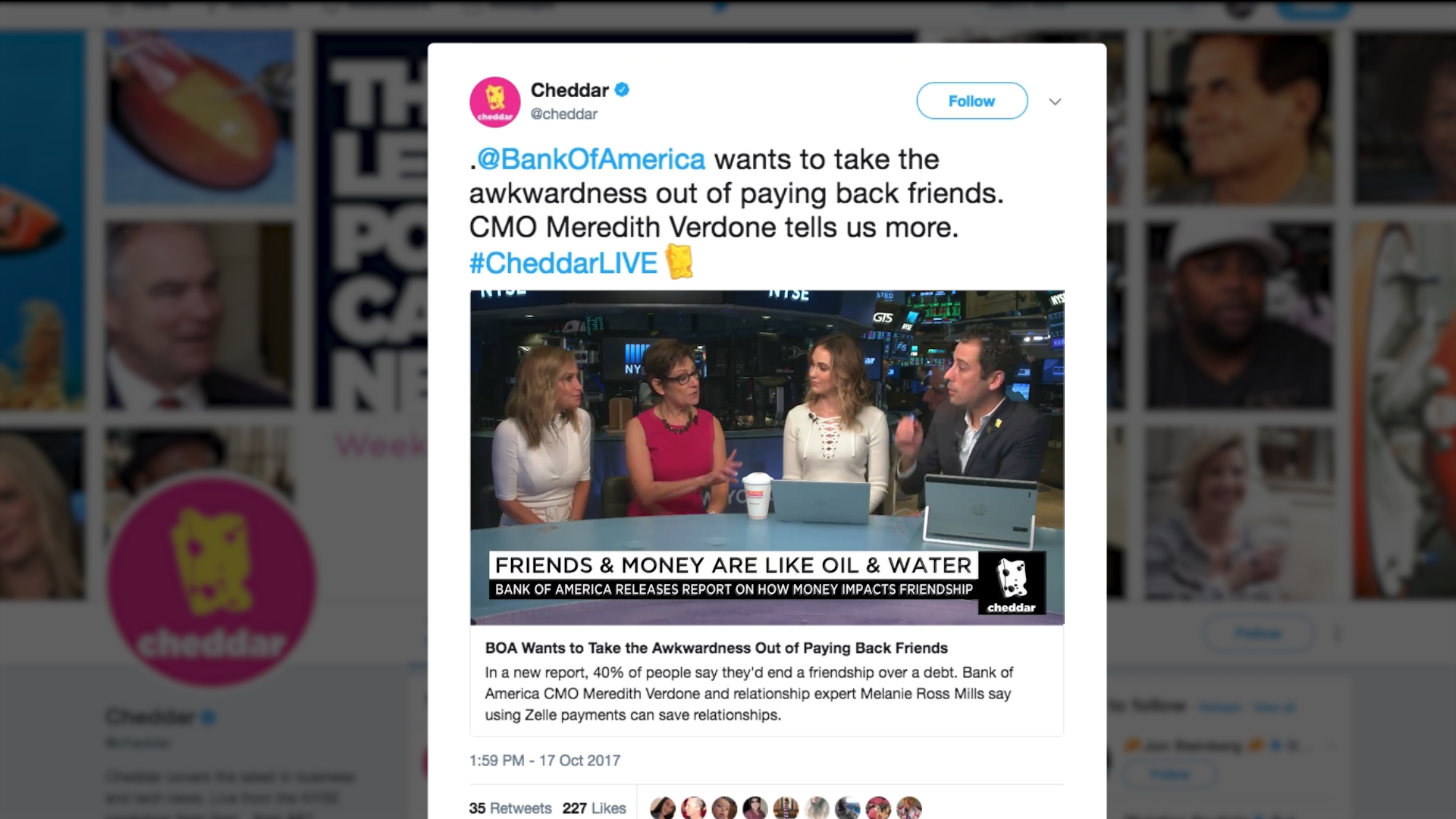 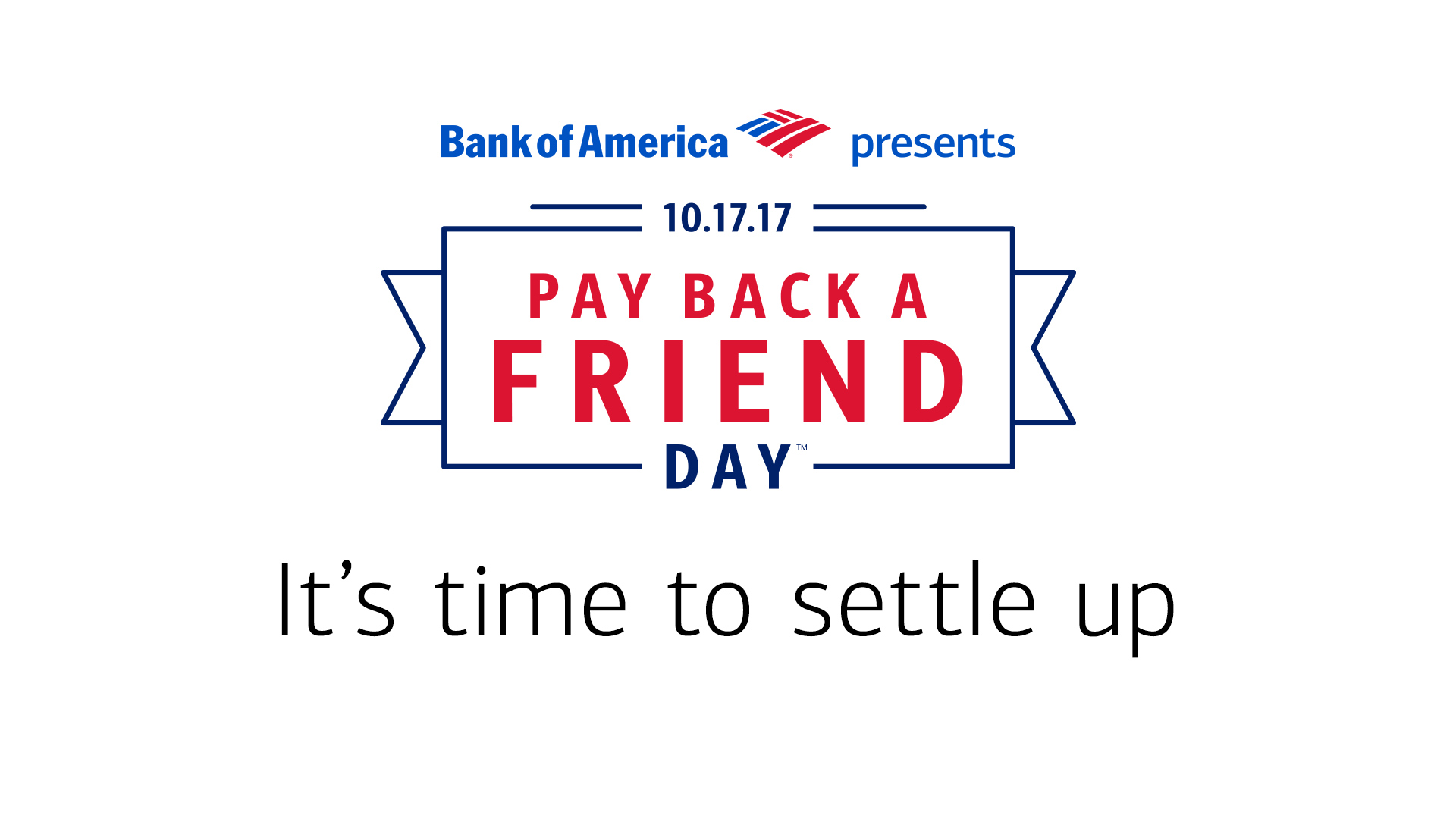